My birthday this year happened to fall on Thanksgiving (as it does every so often). Instead of stuffing our faces with stuffing and other foods, I wanted to adventure for my birthday. With it being winter and with limited resources, I chose going to Canada since it wouldn’t be a national holiday and more places would be open for my adventurous celebration. We took a road trip from Seattle to Kamloops (for a resting point only) to Banff to Calgary. While the weather was certainly wintery and blustery, we also enjoyed a couple sunny days.

After staying a night in Kamloops, grabbing a bomb breakfast birthday burrito at Hello Toast, we drove the last leg toward Banff. Something we didn’t expect was to be stopped for an hour due to a controlled avalanche at Rogers Pass. If you’re traveling during the winter, plan that this may be the case for you as well. When we talked with locals in town, they knew exactly what we meant by “stopped at the pass” because it’s a common occurrence.

After traveling for the majority of the day and with some minor delays, we finally made it to our first stop— Lake Louise. I was hoping to catch sunset at the lake, but we caught dusk instead. Nevertheless, it was cool to walk on the famous lake when it’s frozen. We wiped away some recent snow and was able to see the rocks beneath the ice which was comforting since if the ice were to break it wouldn’t be a long way down.

We actually have seen the lake before back in July 2015, but it was a rainy/foggy afternoon so we didn’t get to enjoy it at its best. Unfortunately we’ll have to save that for another day again!

After stopping at the lake, all I wanted to do is have a great birthday dinner. We stumbled upon the Park Distillery which seemed to have a fun vibe, so we decided to take a chance. While it’s a distillery, their restaurant can also hold its own— It’s an elevated twist of campfire grub. Most items are wood-fired and their style is semi-a la carte. I got the Campfire Striploin which satisfied my craving for a steak & potatoes type of birthday dinner.

After dinner, we were ready to crash for the day and after some reconsideration, we ended up in Canmore at this Airbnb. We highly recommend it! It was a great location, cozy space, and the hostess Carrie was very accommodating, especially with our last minute reservation.

The next day, we woke up very early to get out to Johnston Canyon. Visiting Johnston Canyon is a must for any visit to Banff. It’s accessible year-round, and the frozen hanging icicles, stopping time in their tracks is a worthy winter destination. Another bonus about visiting this destination is that it’s an easy to moderate hike with multiple features— Lower Falls, Upper Falls, Ink-pots, and the Secret Cave. 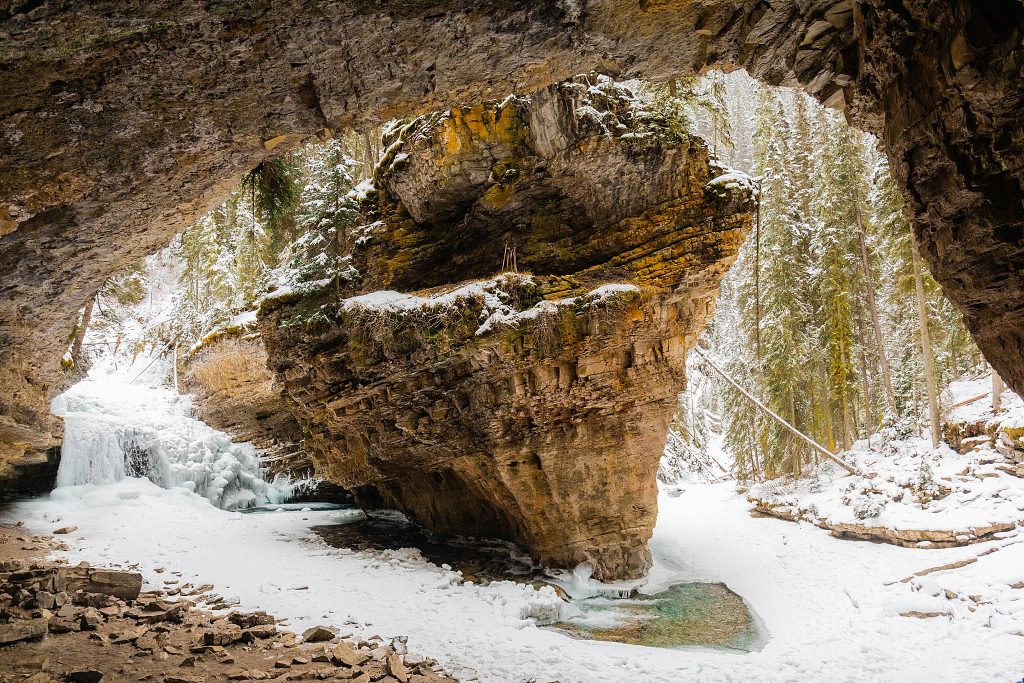 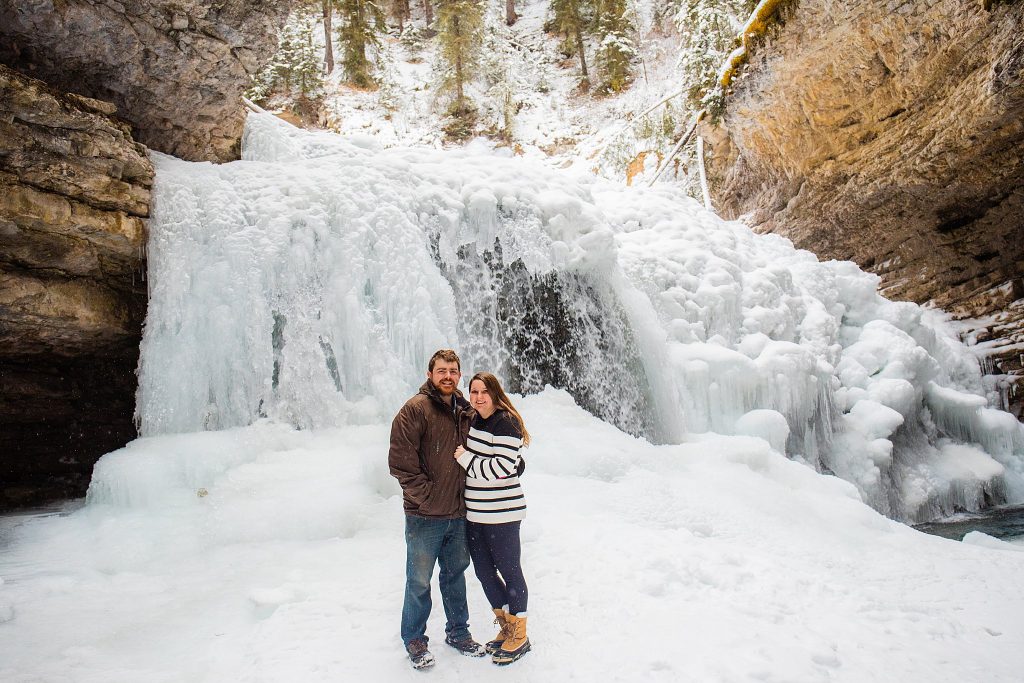 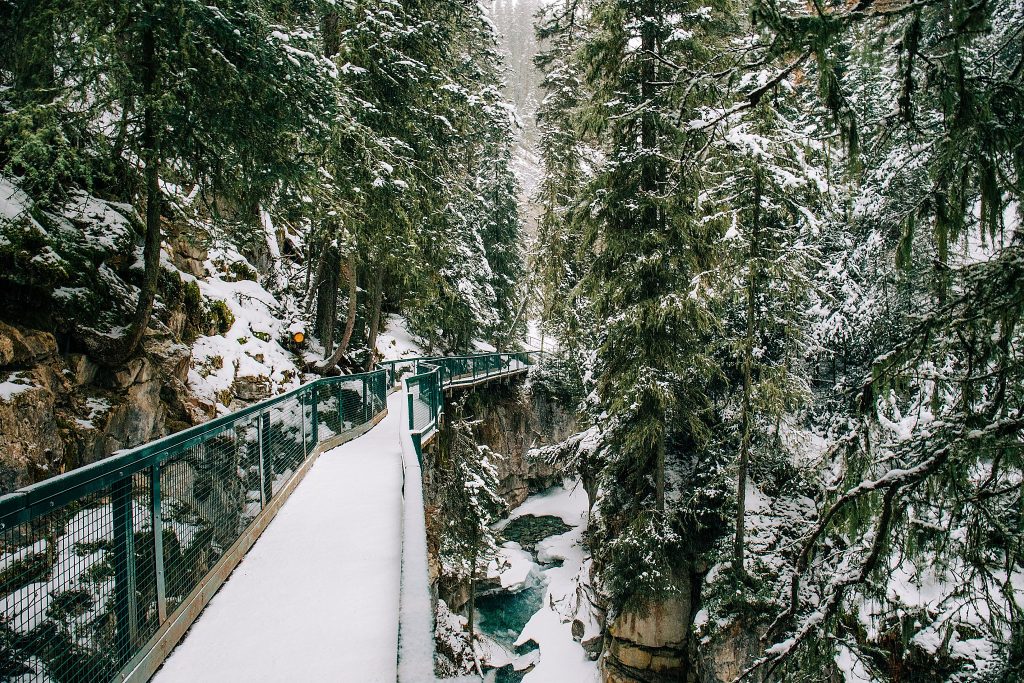 After our morning of hiking around the frozen canyons, we were hungry for a quick bite so we stopped into Squish. It’s literally in a cellar, so it was a bit tricky to find. It hit the spot, was quick, and it was affordable– tough to find in downtown Banff!

Even though we were limited on time, I wanted to try to get in as much as we could given our short trip. I had seen the Tunnel Mountain hike near downtown Banff in my research, and decided it was a perfect time to give it a try. It was not too far from where we already were, and not too difficult for our post-lunch hike. 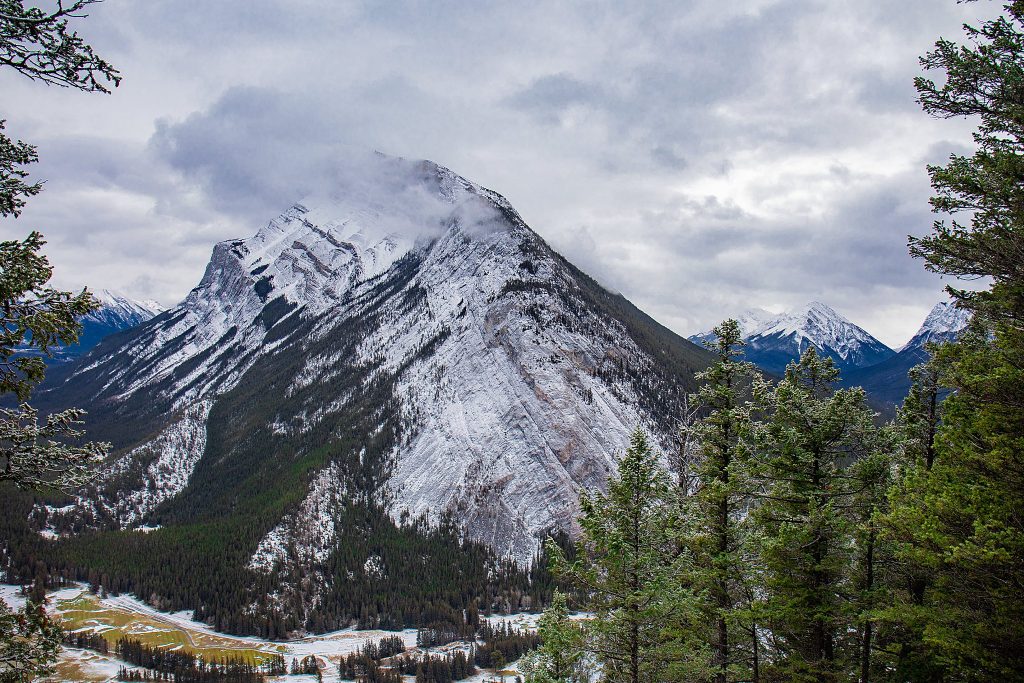 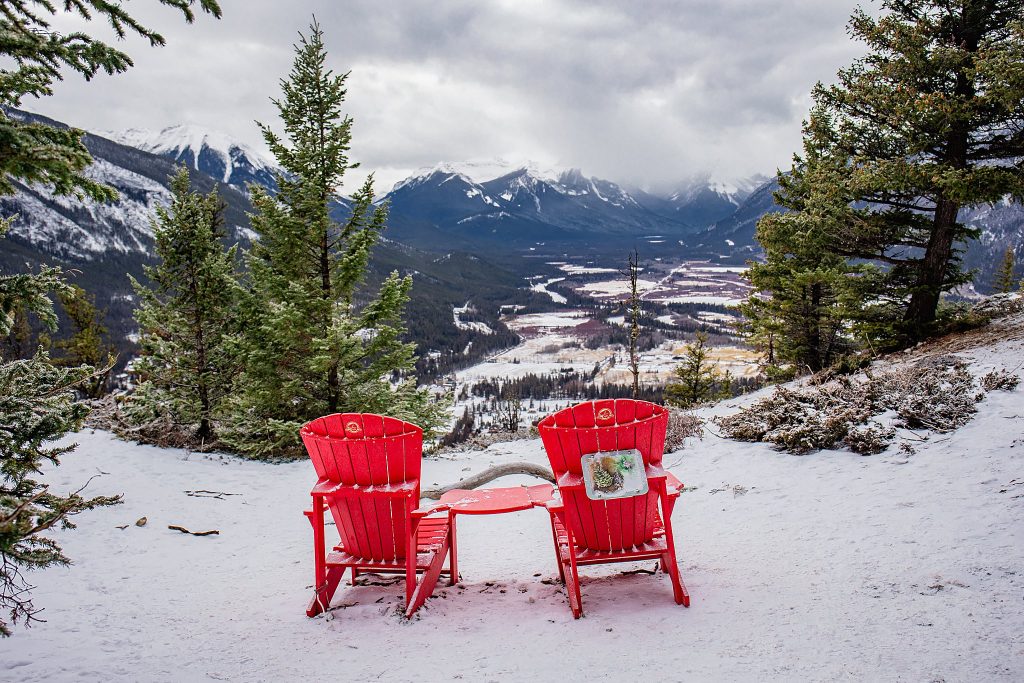 After the hike, we drove to Calgary where we were staying for the remainder of the trip. (It’s worth the drive to save big $$ on hotel/accommodation costs!)

For dinner, we found a cute Italian place called Cardinale that was SO DELICIOUS that we walked to from our hotel.

The next morning, we felt like the weather was going to be cooperative enough for us to visit the Peyto Lake Overlook. (I was hoping for clear, blue skies– not always a given during the wintertime.

Let me just say that this place is absolutely breathtaking, no matter what time of year you go. The peaks and water views are insane. I read online that the conditions were snowy, so we brought our snowshoe gear to get up to the overlook from the place you park during the winter. A perk of the winter visit? Hardly any people around, but enough to make sure you feel like you’re not going to be eaten by a bear. 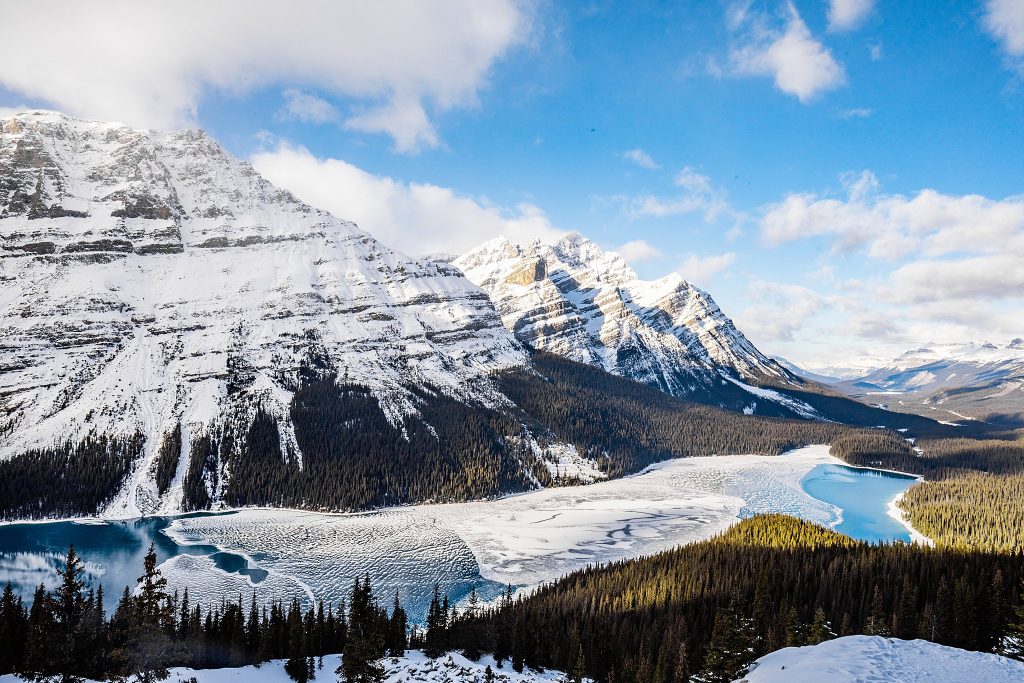 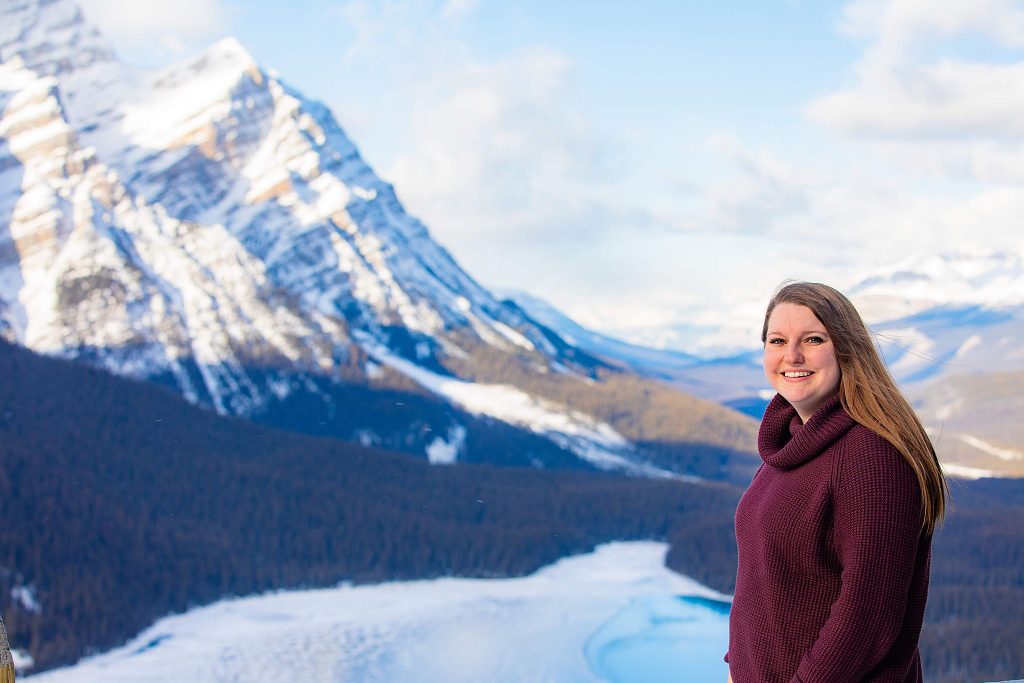 Our our way back from Peyto Lake, we made a few stops on our way back to Banff. One of our stops was to see the Natural Bridge in Yoho National Park. The water has flowed through the rocks to create a natural bridge. When the water freezes completely over, I believe you can walk down underneath but when we went it was only just beginning to freeze.

Our next stop was Emerald Lake, close by to the Natural Bridge. We walked around the area, but didn’t do the full trail around the lake since it was more just to see what it was. Unfortunately, the emerald color is difficult to tell under a blanket of snow, but the views were still spectacular!

On our way back to Banff, we saw some beautiful mountain views. Finally, the sun was hitting the mountains just right!

Even though we have taken the Banff Gondola up to the top of Sulphur Mountain back in 2015, I wanted to ride it again. I was SO happy that we did. We’d had mostly cloudy weather for a majority of the trip, but the sun was coming out and casting really neat shadows on the mountains. In addition, the view really opened up at the top for our last night in Banff. This place has something so magnetic about it that it makes me never want to to leave! It’s definitely one of my favorite places that we’ve visited.

For all the details on our trip up the gondola, click here!

By the time we got back to Calgary, we were hungry and worn out from our long day of driving and adventuring. One thing about Brighton: he absolutely loves a good burger. I was thinking that we could get something quick-ish and casual since the last thing I wanted to do was spend hours (or too many minutes, really) looking for a good restaurant. I stumbled upon this burger place in my quick search and we both said, “sounds great, let’s go” immediately.

It hit the spot. Luckily, it wasn’t too busy and frankly my photo doesn’t do it justice, but take my word for it. Just go. So good.

We woke up to a beautiful sunrise over Calgary from our hotel room. We went out for one last coffee run at Phil & Sebastian Coffee Roasters for our long drive home (just under 12 hours). It was an amazing birthday trip that I won’t forget!

Have you been to Banff before in the winter? What other fun things should we do next time?

The Fine Art of Microadventure