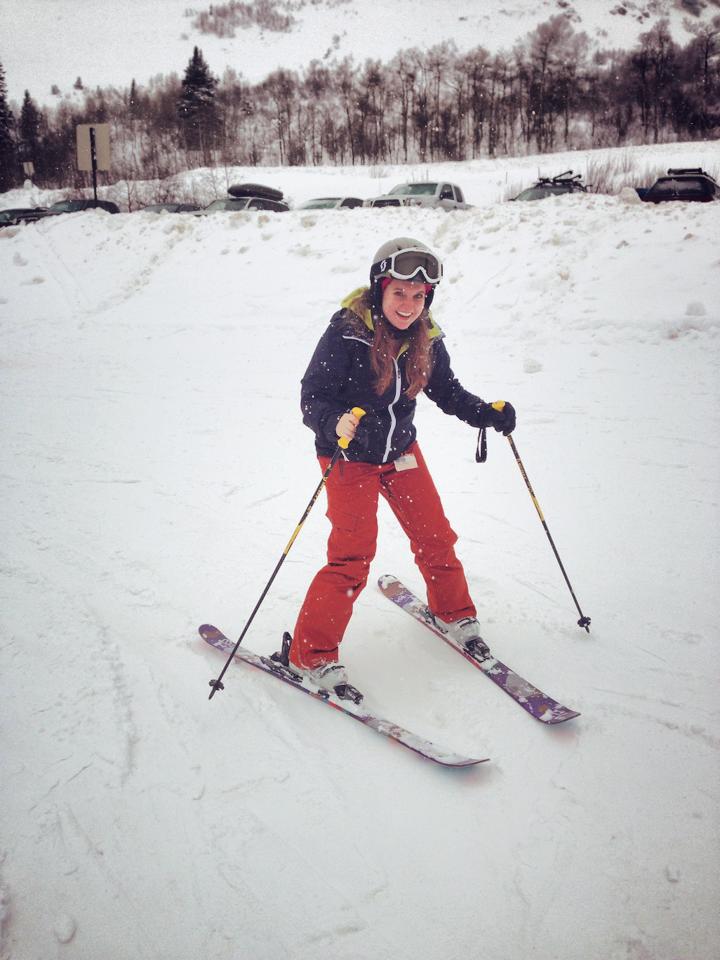 It seems like everyone in the SLC area is into either skiing or snowboarding. I’ve been wanting to try it out since I heard I was going to be in Utah for the winter season. I was a little nervous since given my freak accident of a broken wrist last semester, it seems that my bones might not be as strong as I thought!

Well my company apparently hosts a ski day in January, so this was my perfect opportunity to try it out! Most people I’d talked to had recommended trying out skiing first, since it might be easier for me to pick up. One of my coworkers was willing to help out the newbies on the bunny hill, so I even had a teacher.

Do you know how much equipment you need for skiing?! It’s pretty intense. I wore my roommate’s ski pants and face/neck warmer. I rented boots, skis, poles, and a helmet. I bought discounted gloves and goggles. Finally, I wore my own jacket, socks, and thermal undershirt. With all that gear, I was ready to hit the slopes! 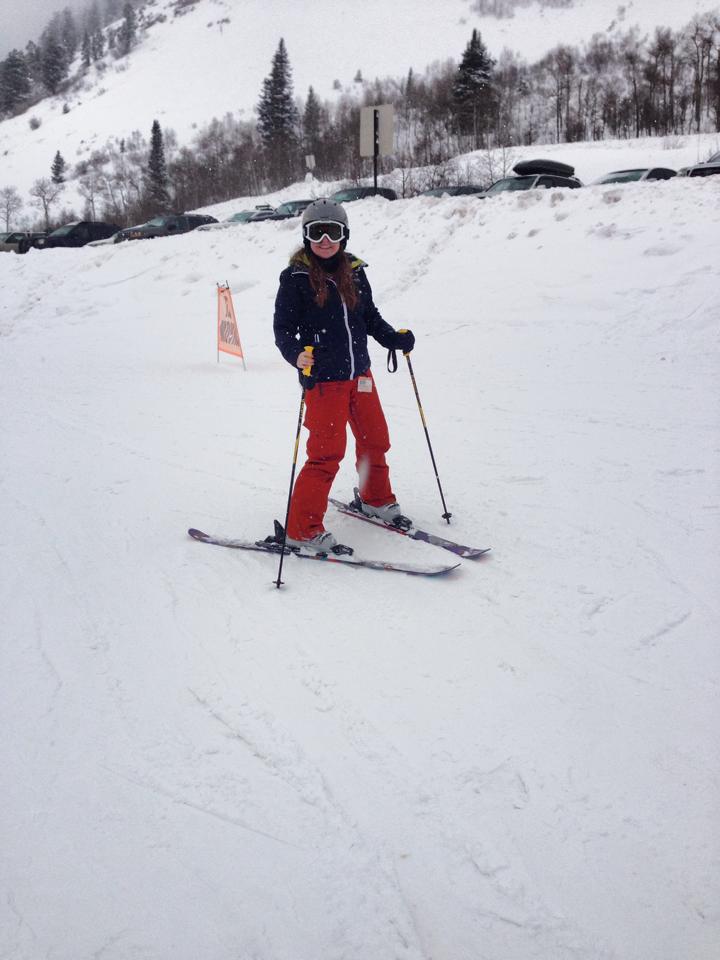 I may have looked like a pro… but I was certainly not when it actually came to the act of skiing. After we got to Snowbird (the resort), the newbies and our teacher headed over to the “ski school” that they teach lessons in. Apparently, you’re allowed the use the area even if you aren’t in lessons as long as there is a staff member there. They had this cool little escalator thing that you moved up to and then it took you up the tiny little “hill” which was barely even an incline.

Within 5 minutes, I fell down…. And I couldn’t get back up. It was actually very frustrating. I didn’t mind the falling as much as the struggle to get up afterwards. The snow was super powdery that day so falling didn’t actually hurt. After that first fall, I realized that I didn’t want to fall since it was such a process to get back up. Then, we learned the “snowplow” AKA “pizza slice”. It was actually not too difficult to learn the general concept. My first instinct was to learn, “how do I stop?!” because I would get going and then feared crashing into a wall or a person.

After we just learned what it was like to be on wax on snow, we moved to the beginner hill which actually had some incline. Everything was so new: how to get on and off the ski lift, how to stop, how to steer, etc. I fell a few more times, each time someone having to literally pick me up off the ground. I finally started to get the hang of it and go around the little signs they set up for the little kids in ski school to go around. It was fun! 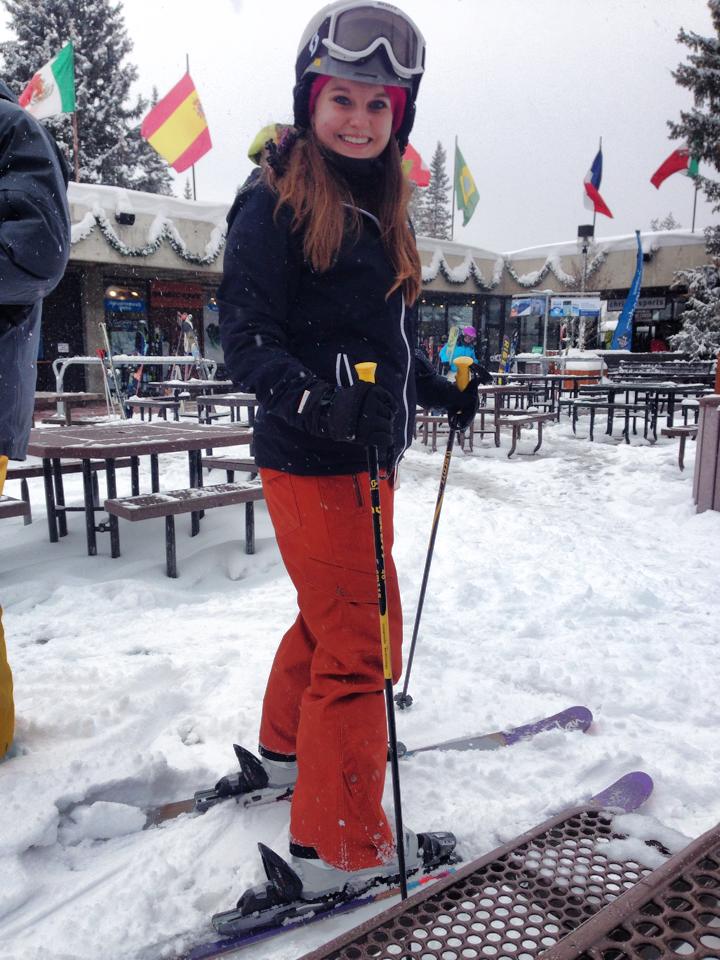 I was also tiring. My calves hurt as if I was rollerblading for the first time in a while. My hip flexors immediately started tightening too. I believe it was due to the fact that in snowplow stance you put a lot of weight on your joints (especially knees and hips) to control your movements but it’s a little unnatural. It’s hard to describe unless you feel it. I took a short break and got back into it. I finally felt like it was something I could enjoy.

The adventure was yet to begin in my first ski lesson. My coworkers wanted to move to a green hill, and someone explained that green was just like what I was doing but for a longer period of downhill. I thought I could handle that. The Big Emma had different plans for me. When we got up the lift, which I face-planted off of, I knew I was in over my head. Big time.

I attempted to take the run slowly so I could control where I went without falling off any cliffs or running to obstacles. I did okay for about 5 minutes… and then I fell. There was no one to pick me up at that point. I knew I needed to get off this mountain. An older, friendly couple happened upon me as I was down in the snow looking pathetic. They asked if I needed help, and I pleaded for them to take me back to the Chickadee area (beginner’s area). I was pretty desperate to get off the run anyway except down.

This poor couple had no idea what they were getting themselves into. First, they had to literally pick me up off the ground and then one of them lead while the other “swept” behind me as they called it. They were from Maryland on a week vacation. I felt terrible for burdening them but I was terrified and they could tell. Basically, the husband looked a the map and attempted to figure out the best (aka the easiest) route down the mountain. Some parts I took off the skis and walked in my boots. It was that steep and difficult for me. This whole process took about an hour and a half, and I fell every 10 minutes. It was pretty awful. I was so frustrated by the end that I just wanted to get out of my cold, somewhat wet clothes. Luckily, the ski clothes repelled water for the most part.

Meanwhile, my coworkers (whose numbers I did not have) were looking for me. I had no way of contacting them to let them know I was okay. The couple took me back to the main area of the resort and I was able to text my ride telling him where I was… and then my phone died.

Overall, I summed my day up to be another adventure. My lesson was that I need to stay on the beginners’ slope longer and when I do graduate to green runs, a ski resort that caters more to beginners might be a better idea. I would definitely try it again, so I guess I’m not too scarred from the experience! 🙂