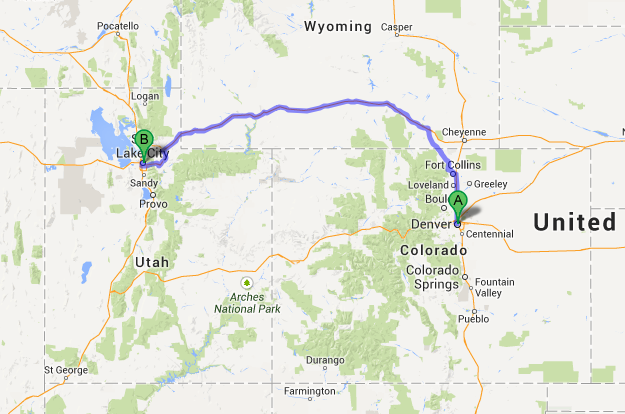 Today was the final day of our road trip (and of the year)! Our journey took us through the rest of Colorado, across Wyoming, and finally into Utah. Surprisingly, I drove for most of the day. I haven’t had a lot of experience driving in the mountains so it was a new adventure for me. Wyoming is also an extremely windy state apparently. My car was being pushed around by the wind while climbing elevations as high as 8,000 ft above sea level! There were also lots of warning signs for truck-trailers that were high profile/lightweight to exit the highway as they were likely to be blown over. The gusts were up to 65 mph! On top of all that, there was snow being blown across the road like a sideways blizzard. It was unlike anything I’ve ever witnessed. 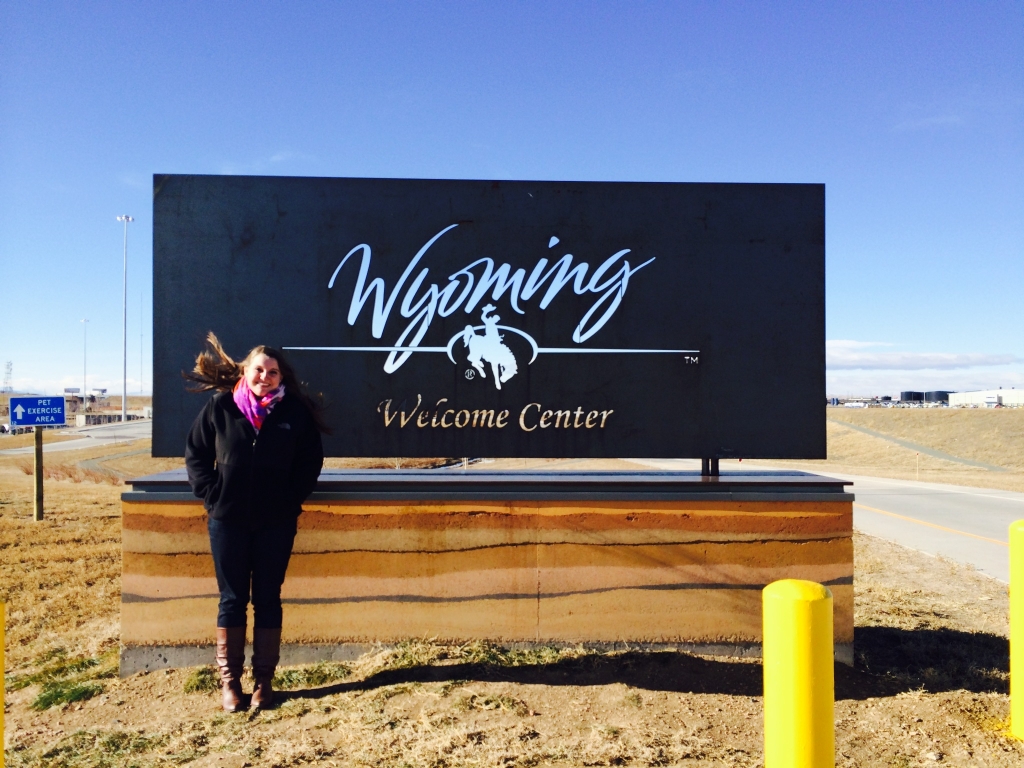 There were all sorts of signs that said “I-80 closed when lights flashing” with huge barricades closing off the road. There is no such thing in Florida! Another thing we don’t have in Florida? Snow fences. They block the snow from building up on the highway. I have to say, I was pretty thankful for these little tools. 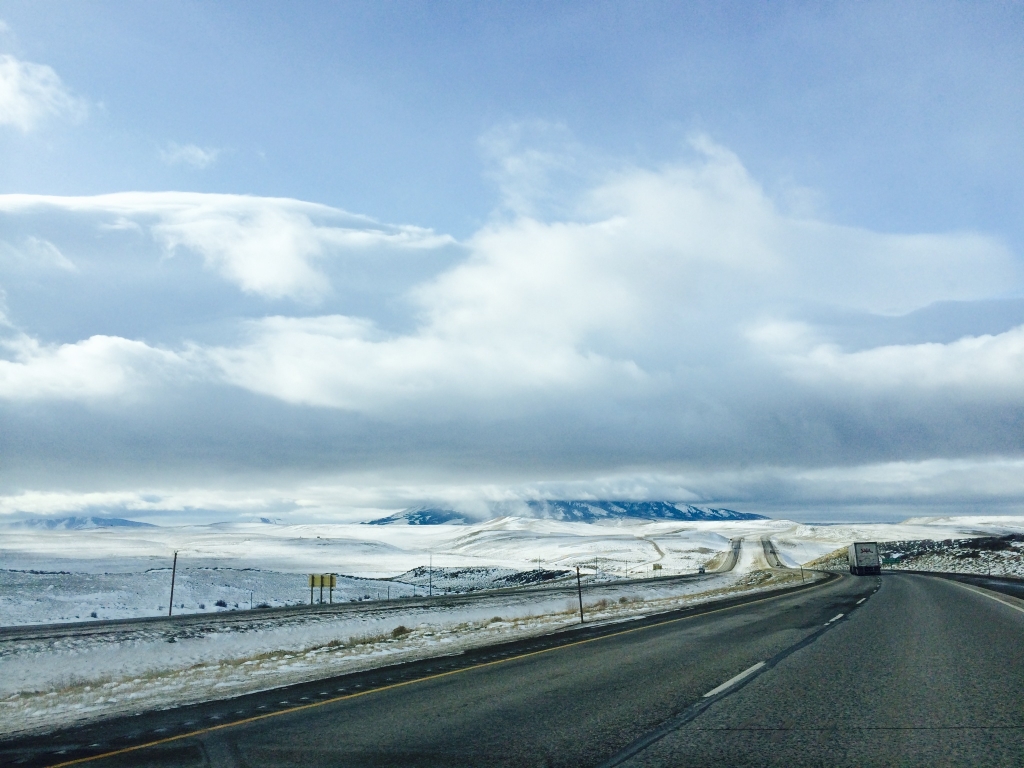 The plus side to this crazy new environment was the fact that Wyoming was breathtaking. The pictures just don’t do it justice. We also drove along the Continental Divide which was pretty cool. 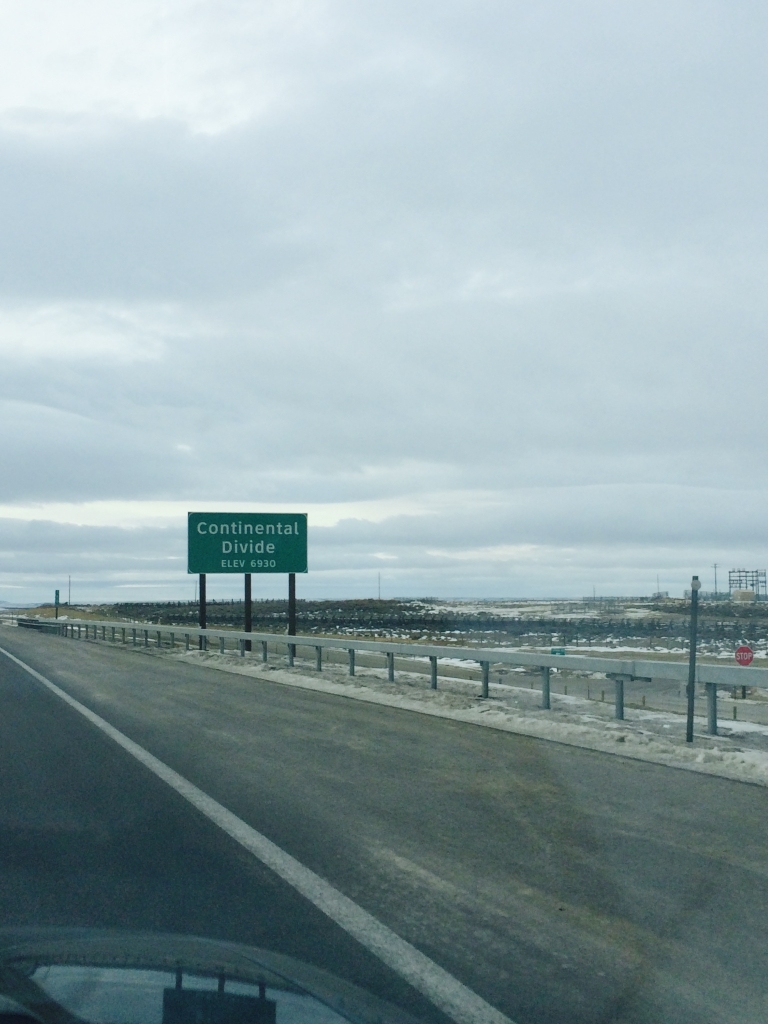 For lunch we stopped in Laramie, and I was able to see my roommate Laura briefly and she even gave us a suggestion (since her boyfriend goes to school there and she was visiting him). I had a buffalo meatloaf sandwich, which tastes way better than it sounds! Katie had a homemade veggie burger. Everything was divine, and once again local choices win again! 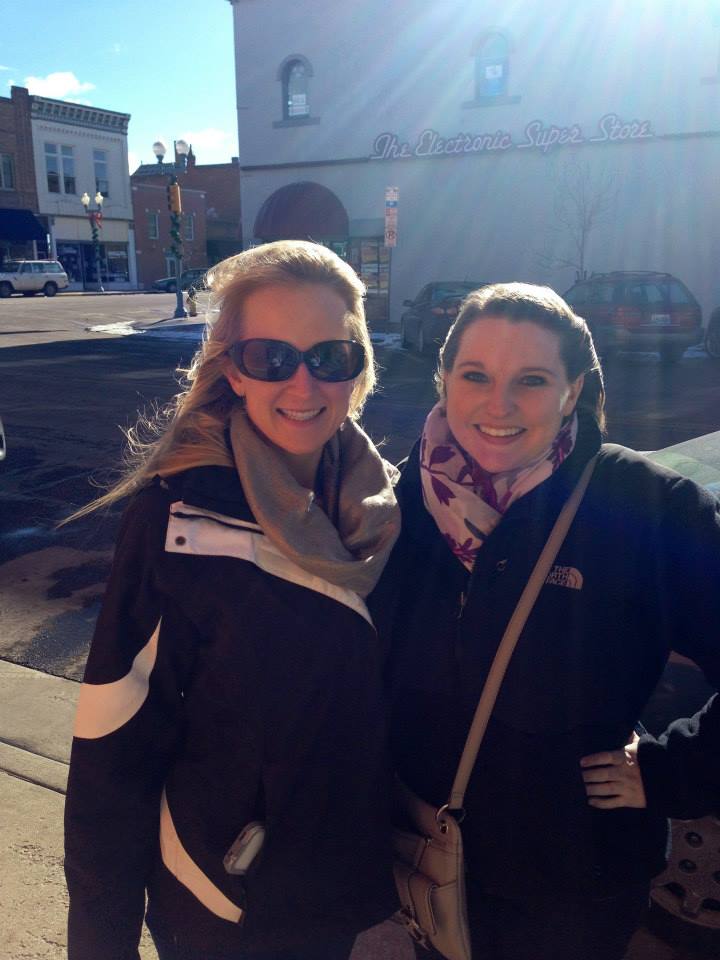 After lunch, the Wyoming area after Laramie was pretty desolate, so we stopped to get gas in case we didn’t have another opportunity. The gas was the most expensive I’ve seen since Gainesville! $3.49 per gallon compared to $2.97 where we’ve gone everywhere else! It was a good decision though because there was literally nothing else around for hundreds of miles. 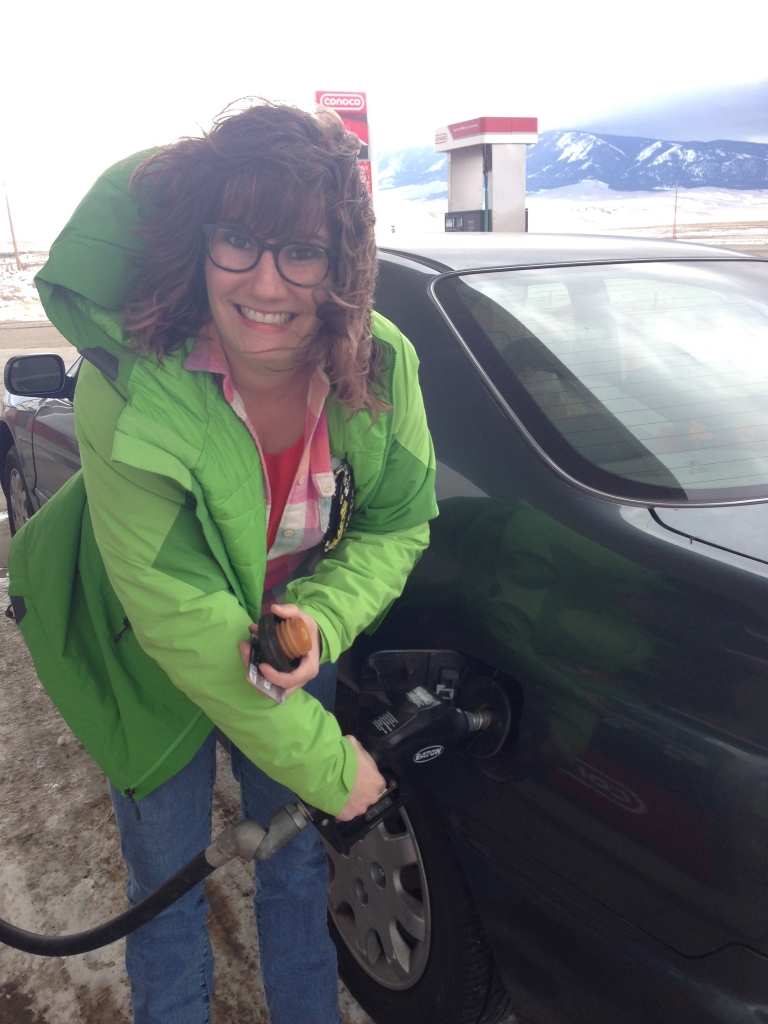 A funny story about this gas station, the wind and Katie though… Katie was paying for the gas when the credit card got blown out of her hand by a gust of wind. Then, since the wind where we were was relentless, the card kept flying away without an end in sight. Then, I see Katie running (in an icy/snowy area) after something when I realize it’s our credit card! Then I start running after her, and this guy in a truck wonders what we are doing. Finally, she catches it and comes back. While she is doing that, random truck guy says to me “my accelerator pedal came out of my truck” as if I could help him. Katie finishes pumping the gas and we get out of there really quick! 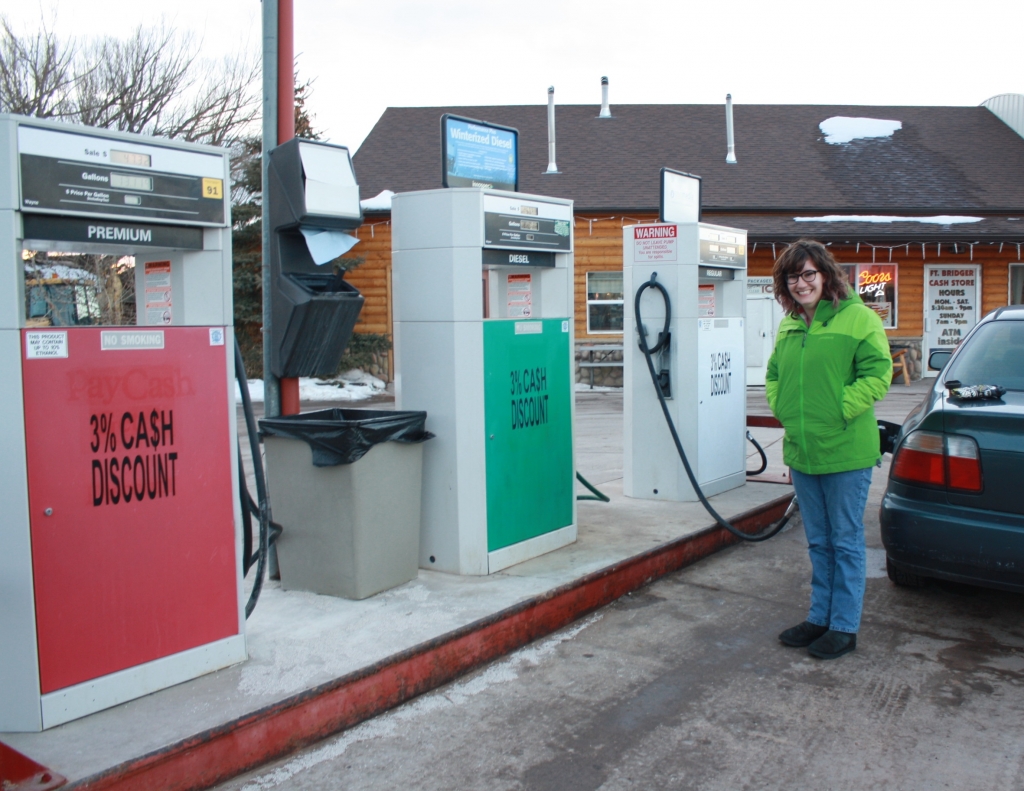 Later on, just before the Wyoming-Utah border we stop for gas again but it turns out to be this little old-fashioned gas station that looks like it’s stuck in the 1950s. Well, when we start pumping the gas, it comes out at a rate of about a gallon every 5 minutes and I get bored so I go to the snow pile to make a snowman. I start gathering snow (with my bare hands) and then I look at my palms and they are BLUE. I’ve heard many horror stories recently about people’s extremities turning blue and falling off, so naturally I panic and wipe off all the snow and run back to the car. What I didn’t think about was the fact that my new dark blue jeans tend to rub off on my hands sometimes and that’s what caused the blue hue to my hands. Katie found this hilarious since she had only witnessed me panicking and had no idea why! 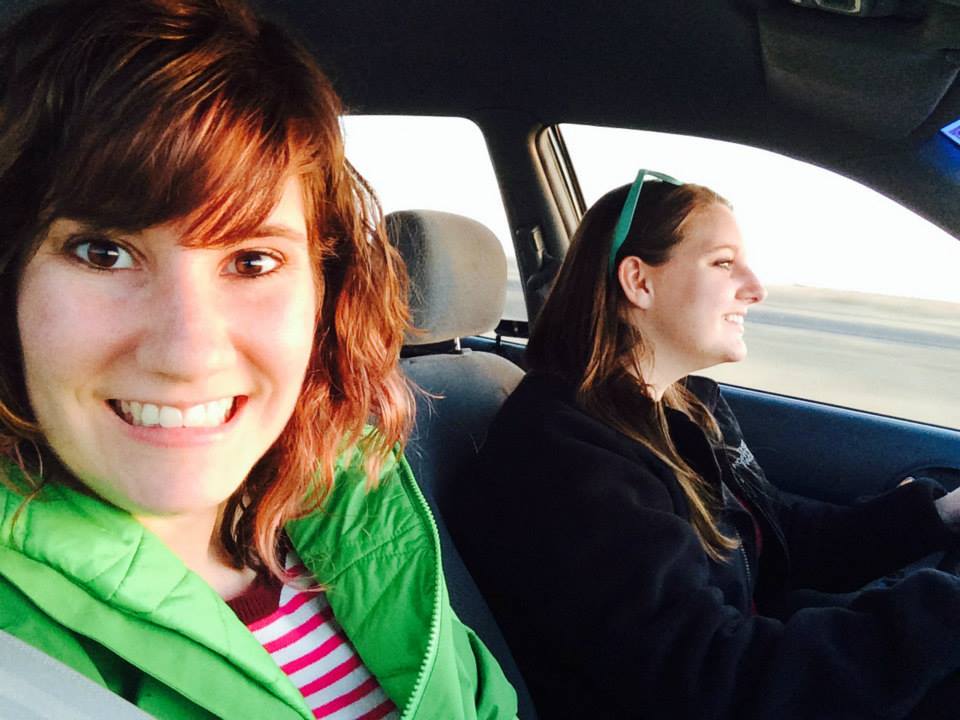 I was so tired of driving after this trip!

At the end of the day, when we were about 20 miles from my new home for the semester, it started snowing. It was magical! I have never witnessed it snowing any more than a light flurry. This is such a new concept to me, so I haven’t gotten used to it yet. Tomorrow I’ll probably have to dig my car out of the driveway though. 🙁

Right now it’s about 5 minutes till 2014 in Mountain Standard Time, so I will ring in the New Year in a new city with new adventures ahead. This year will definitely be interesting!

Connecticut
Pennsylvania
We did not get all 50 states. The list is in the car, so we’ll figure out what we’re missing tomorrow.

We actually drove more like 3,000 miles in all but those distances are only from Point A to Point B for each day’s worth.

The Engagement & How I Met My Future Husband [Wedding]

Where Have I Traveled? [30 Day Challenge]