The Matterhorn. The Mountain of all Mountains. This icon of the Swiss Alps straddles the Swiss & Italian borders, and it has been on my bucket list since the first time I saw a photo of this beauty. Is it possible to have a crush on a mountain? #MountainCrushMonday 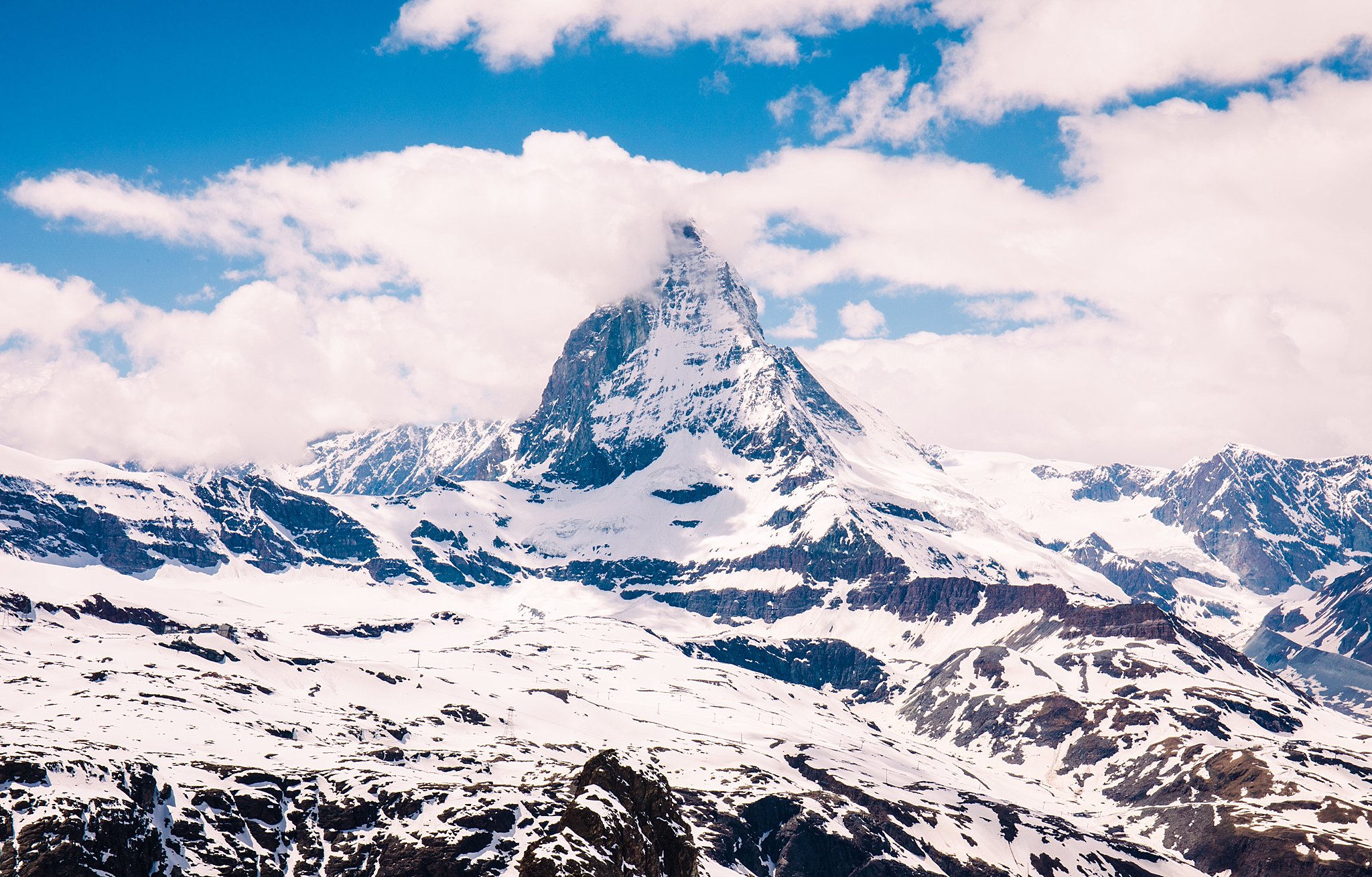 The Matterhorn name is German, and it means the “peak in the meadows.” Towering 14,690 feet above sea-level, this peak was formed by two of the plates colliding. It’s popularized for being the symbol of Switzerland and the Alps in general.

Did you know where the “horn” comes from? A horn is a pyramidal peak, sometimes called a glacial horn in extreme cases, is an angular, sharply pointed mountain peak which results from the cirque erosion due to multiple glaciers diverging from a central point.

Our day began in Évian-les-Bains, France after our day in the vineyards and touring the castle, just over the French-Swiss border. We hit the road and set our directions to Täsch, about a 2.5 hour drive. 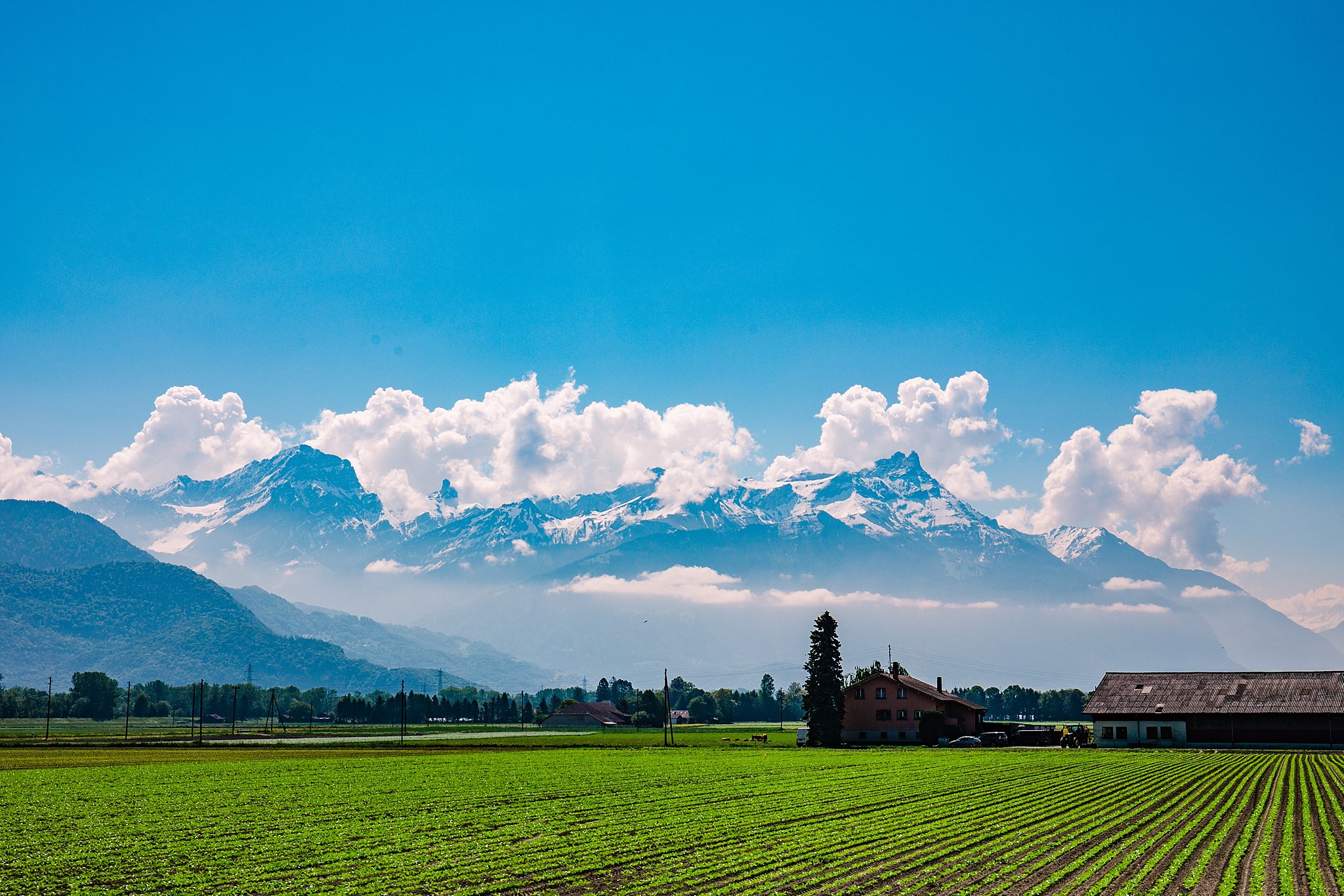 Our plan was to go to Zermatt and see how the weather looked closer to the top of the mountain since if there was no view (cloud covered), there was no sense in buying a hefty train ticket all the way up the railway.

Zermatt is a car-free town. If you’re driving, go to Täsch and park where there’s a clearly marked Parkhaus (parking garage) that connects to the train that will take you up to Zermatt. The train ride from there is about 15 minutes up. At the train station there were webcams showing the current conditions up top, and we decided it was clear enough for us to buy the ticket to go up the Gornergrat railway. 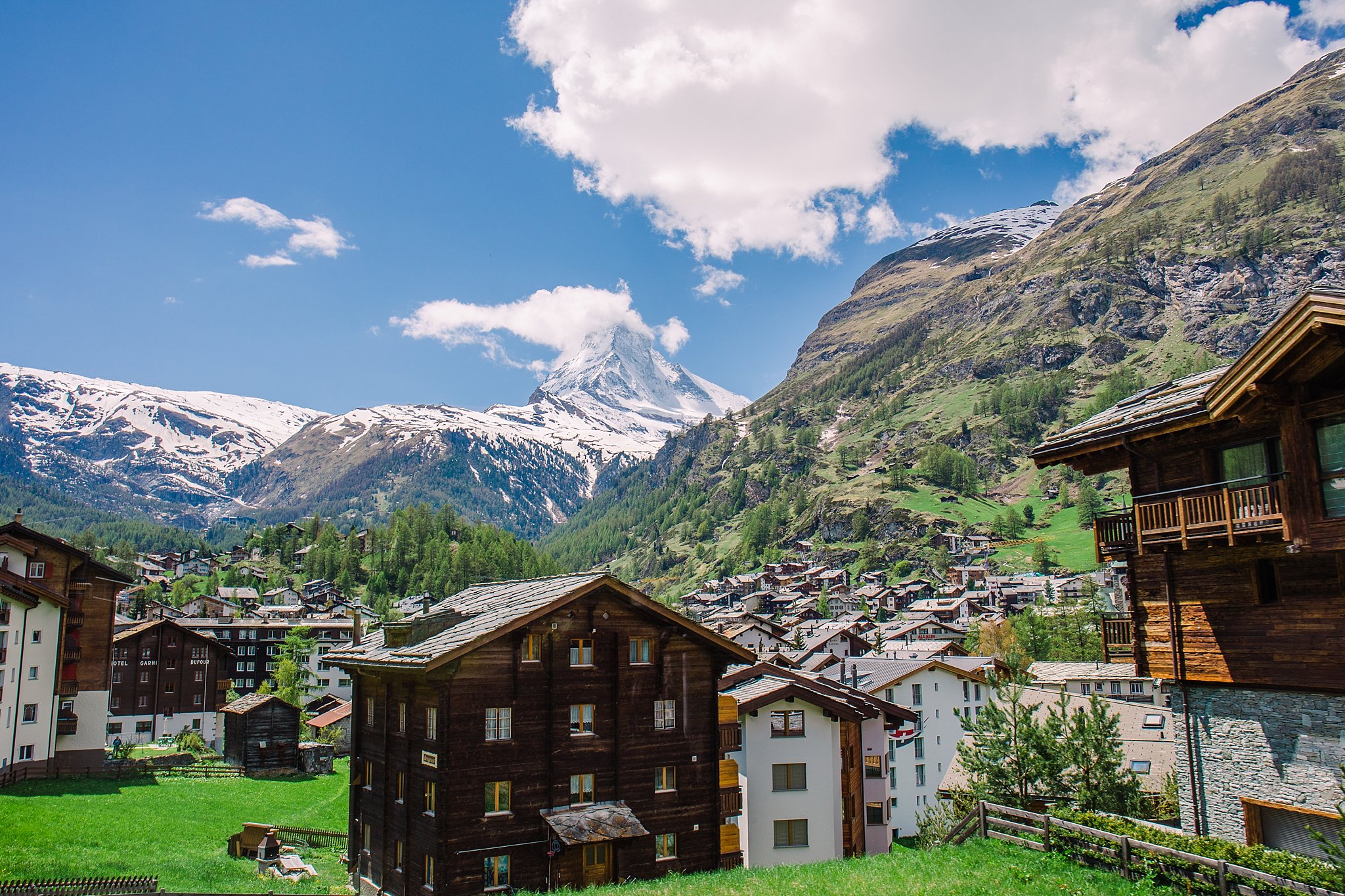 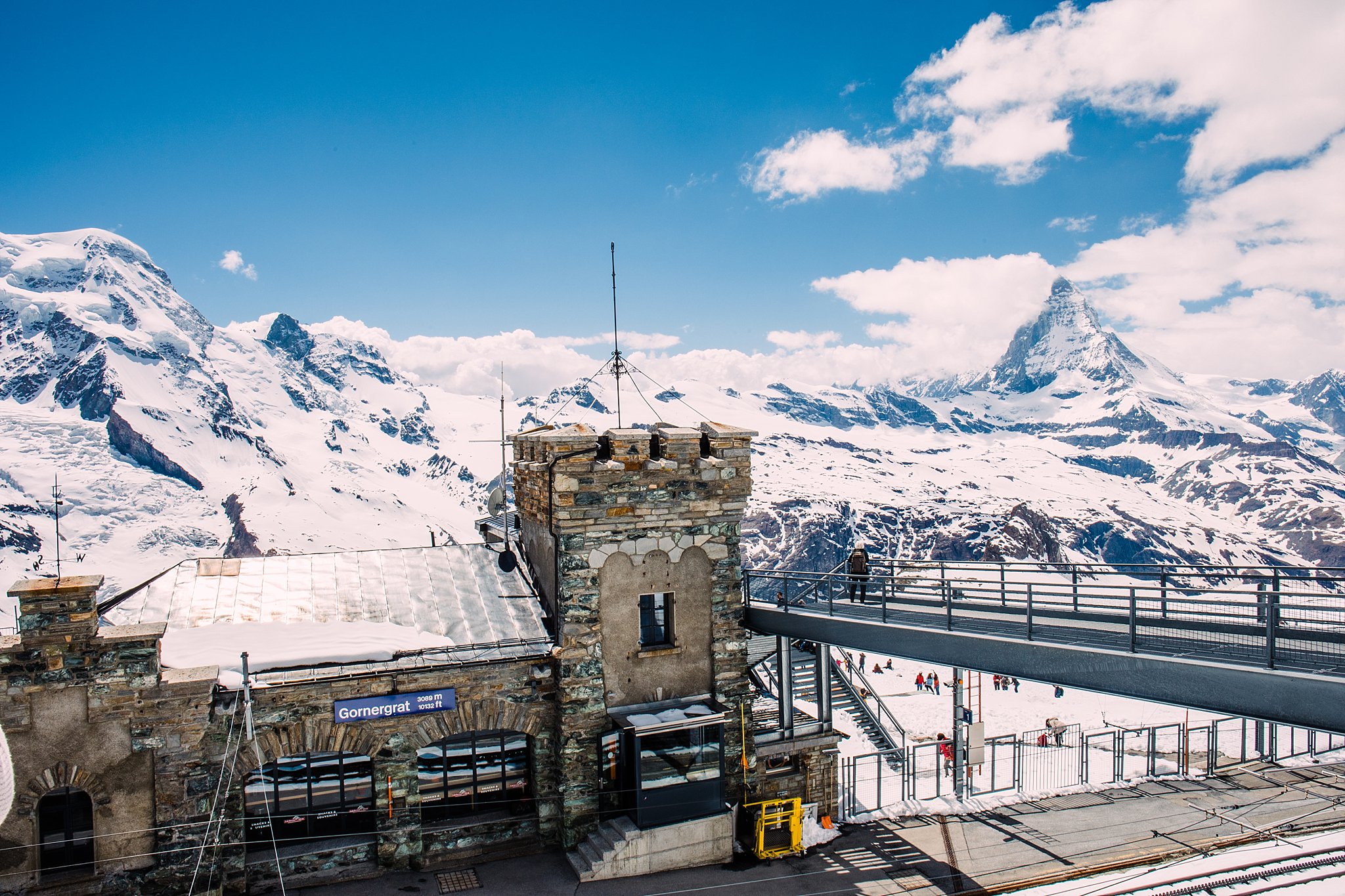 Visiting the Gornergrat ridge is one of those surreal, bucket list- type experiences. The mountain panorama and the unique view of the Matterhorn are unforgettable. With its sunny, year-round accessible viewing platform Gornergrat at 3,089 m has been one of the top excursion destinations in Switzerland since 1898. The Gornergrat Bahn was the first, fully electric cog railways in Switzerland. The railway is also the highest open-air railway in Europe. 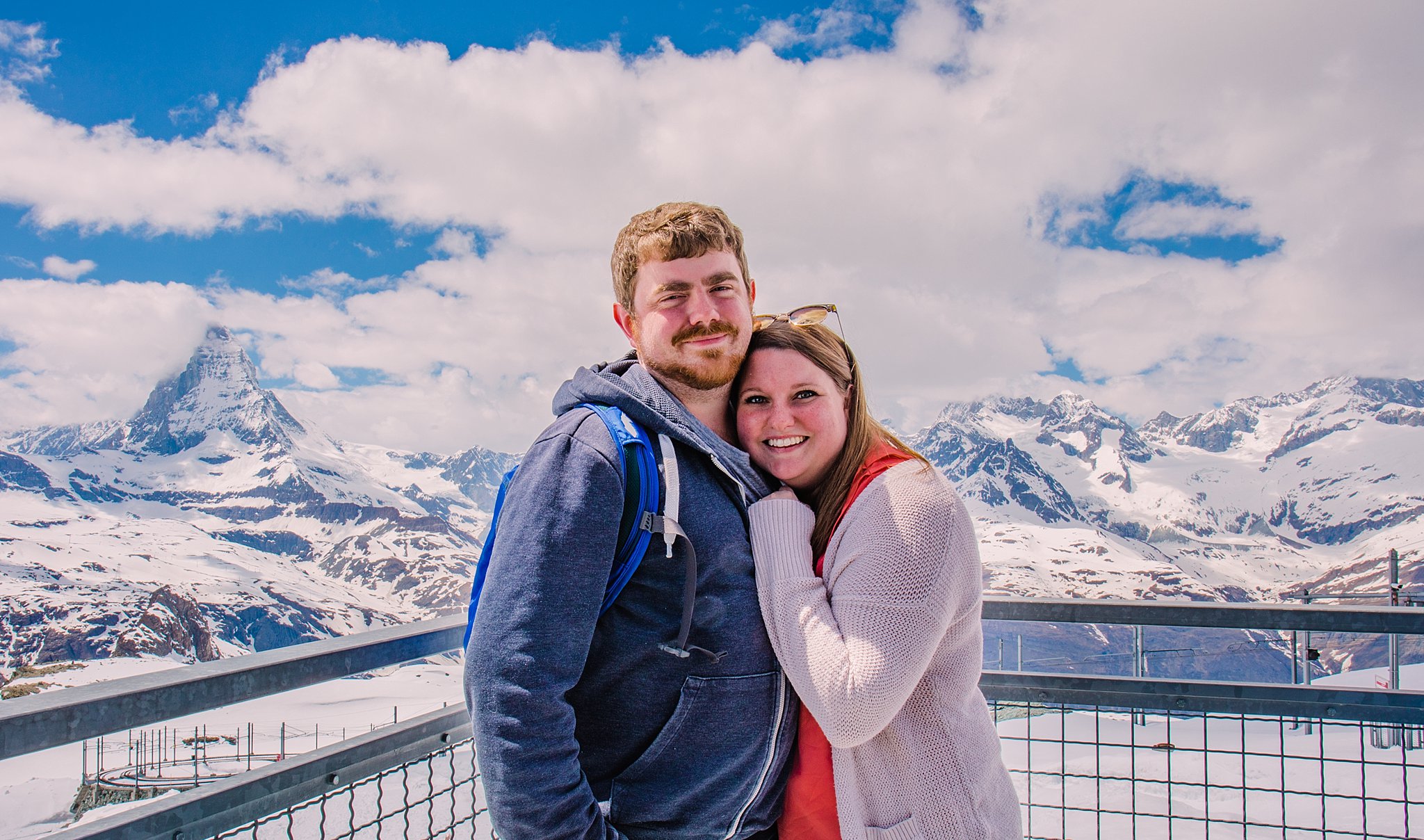 The trip takes about 30 minutes, one-way, to the station. There are fantastic views of Zermatt from above and of course, the Matterhorn along the way. 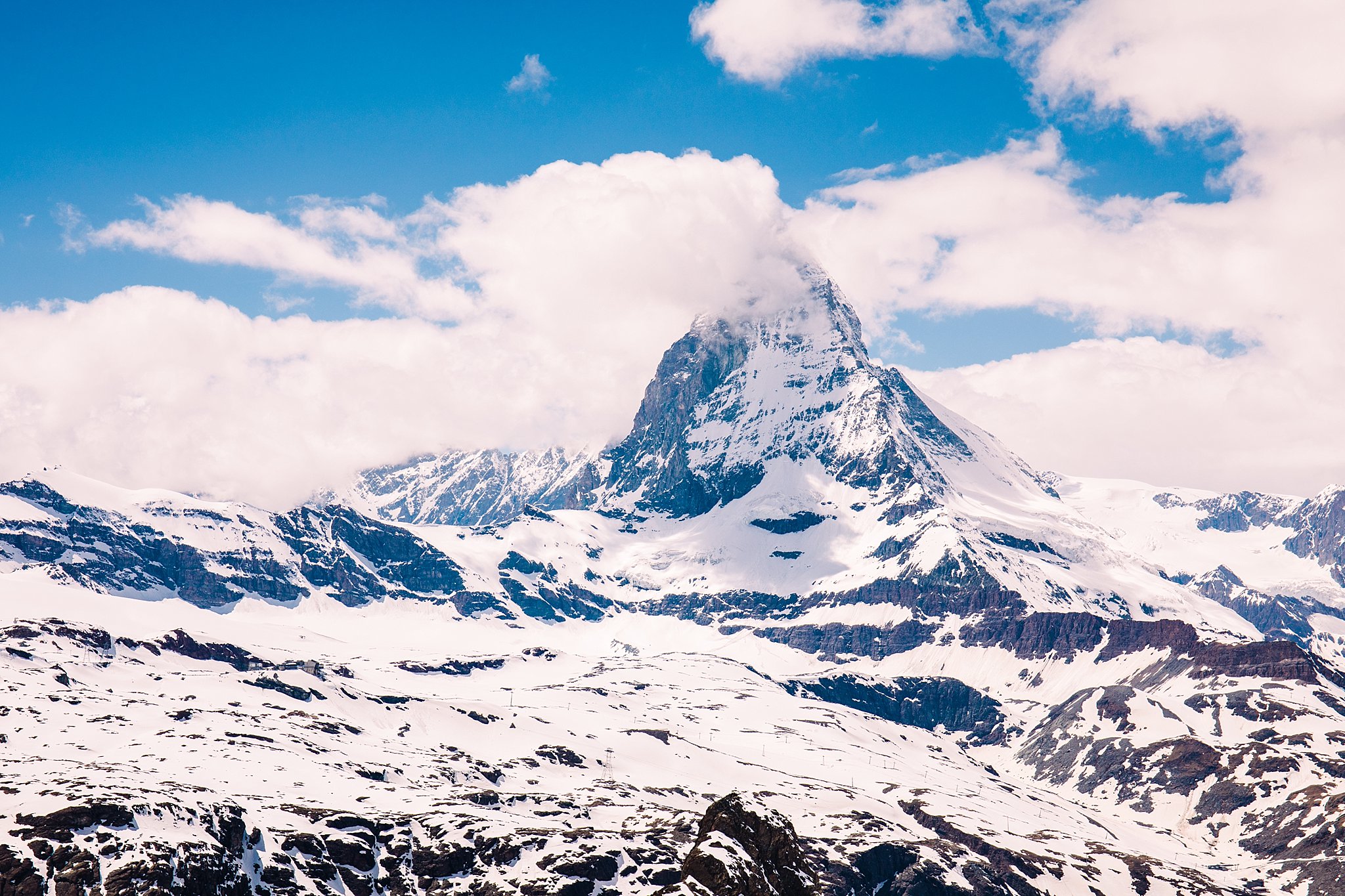 The round trip tickets for us ended up costing about $115 each, so be prepared for a costly adventure. 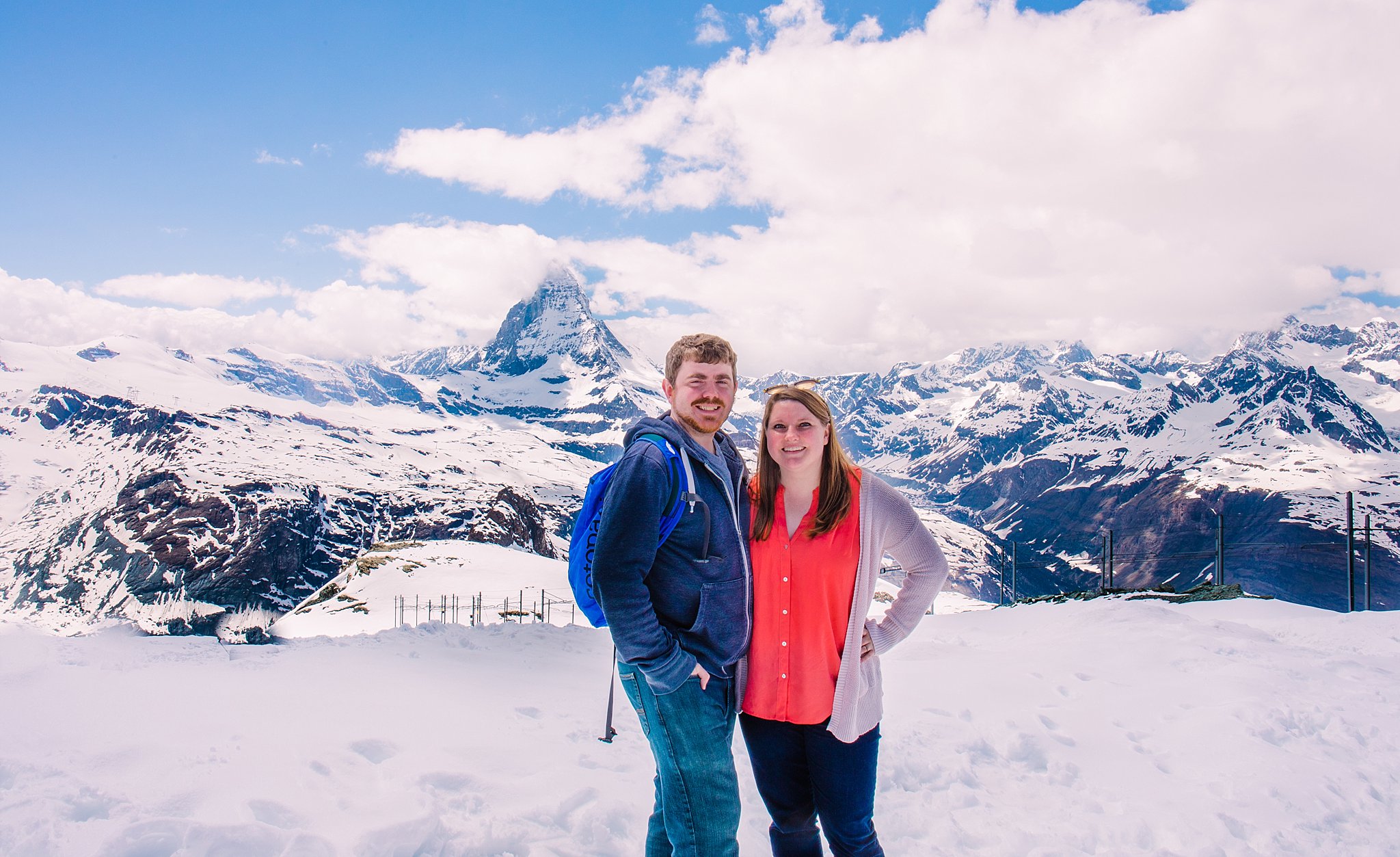 We wandered around to the viewing platforms. I even WhatApped my parents in Florida to give them a brief tour of the area! (Hooray for Wifi!). 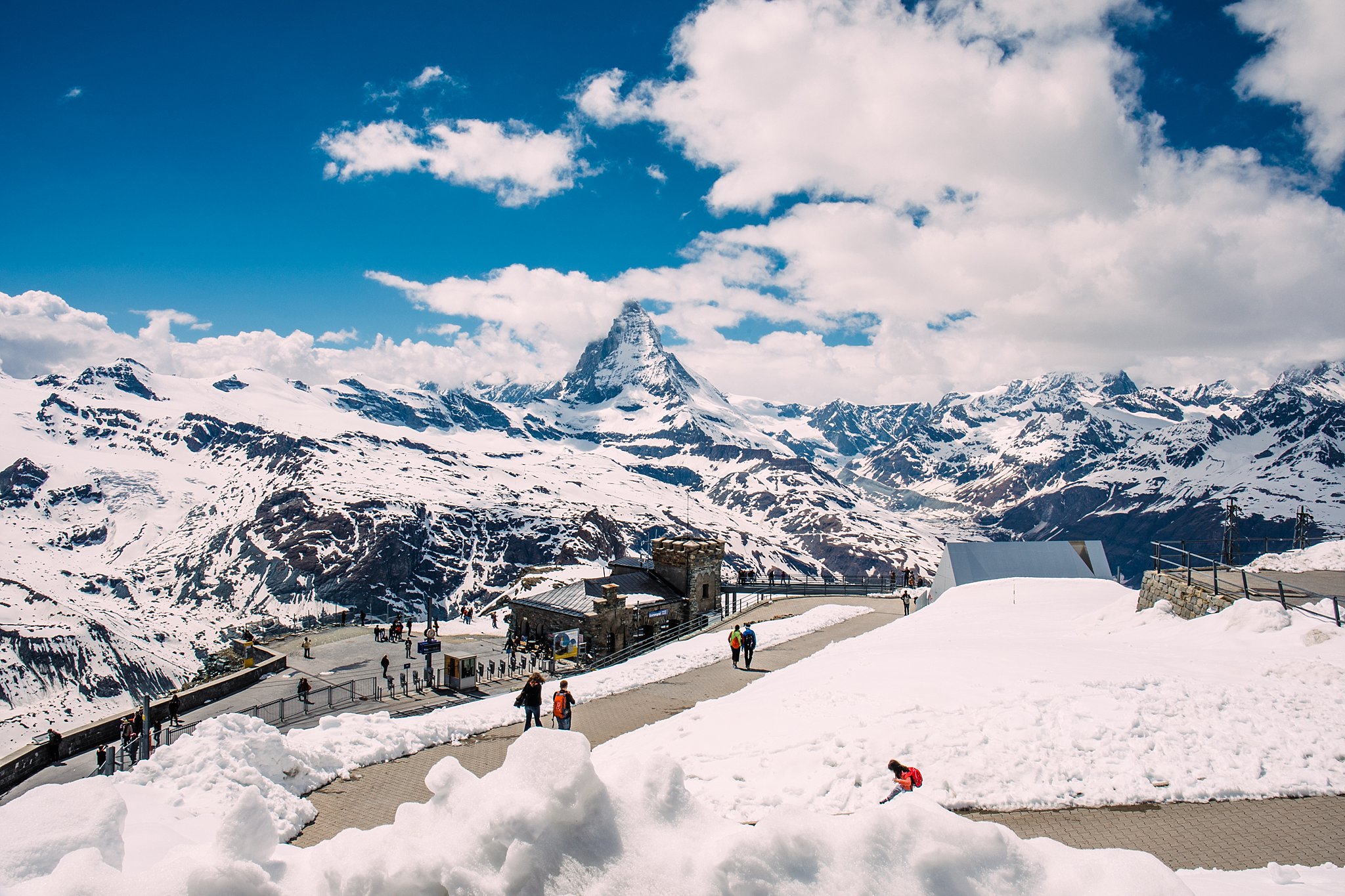 Of course, while we were up there, I had to be a total tourist and take a photo of a toblerone in Switzerland while viewing the Matterhorn. We enjoyed our treat on the way back down the mountain. 🙂

Fun fact: Toblerone is a blend of Tobler’s name with the Italian word torrone (a type of nougat). 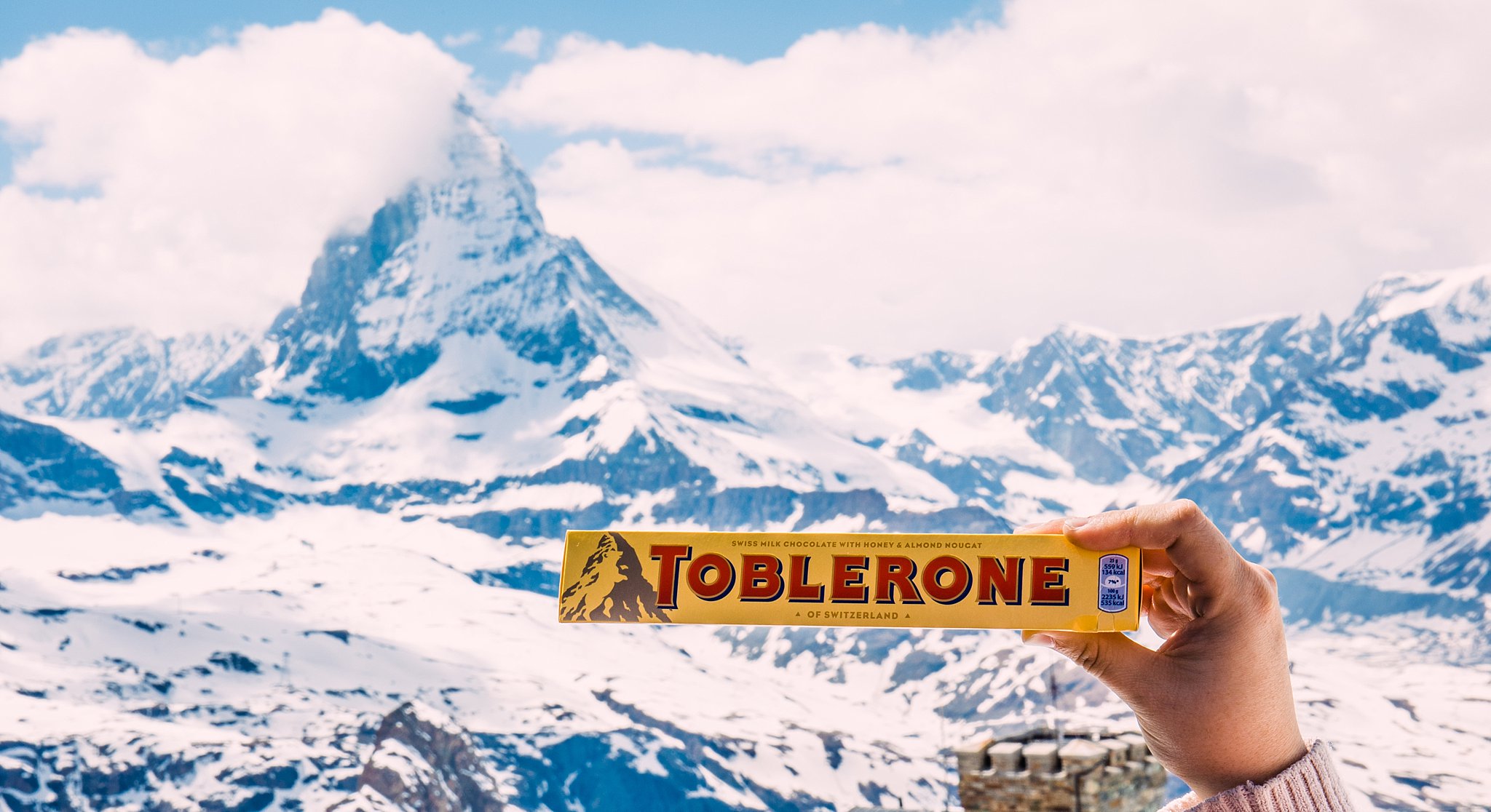 Toblerone was created by Theodor Tobler (1876–1941) in Bern, Switzerland, in 1908. Theodor Tobler, with his cousin Emil Baumann, developed a unique milk chocolate including nougat, almonds and honey with a distinctive triangular shape.

The triangular shape of the Matterhorn in the Swiss Alps is commonly believed to have given Theodor Tobler his inspiration for the shape of Toblerone. 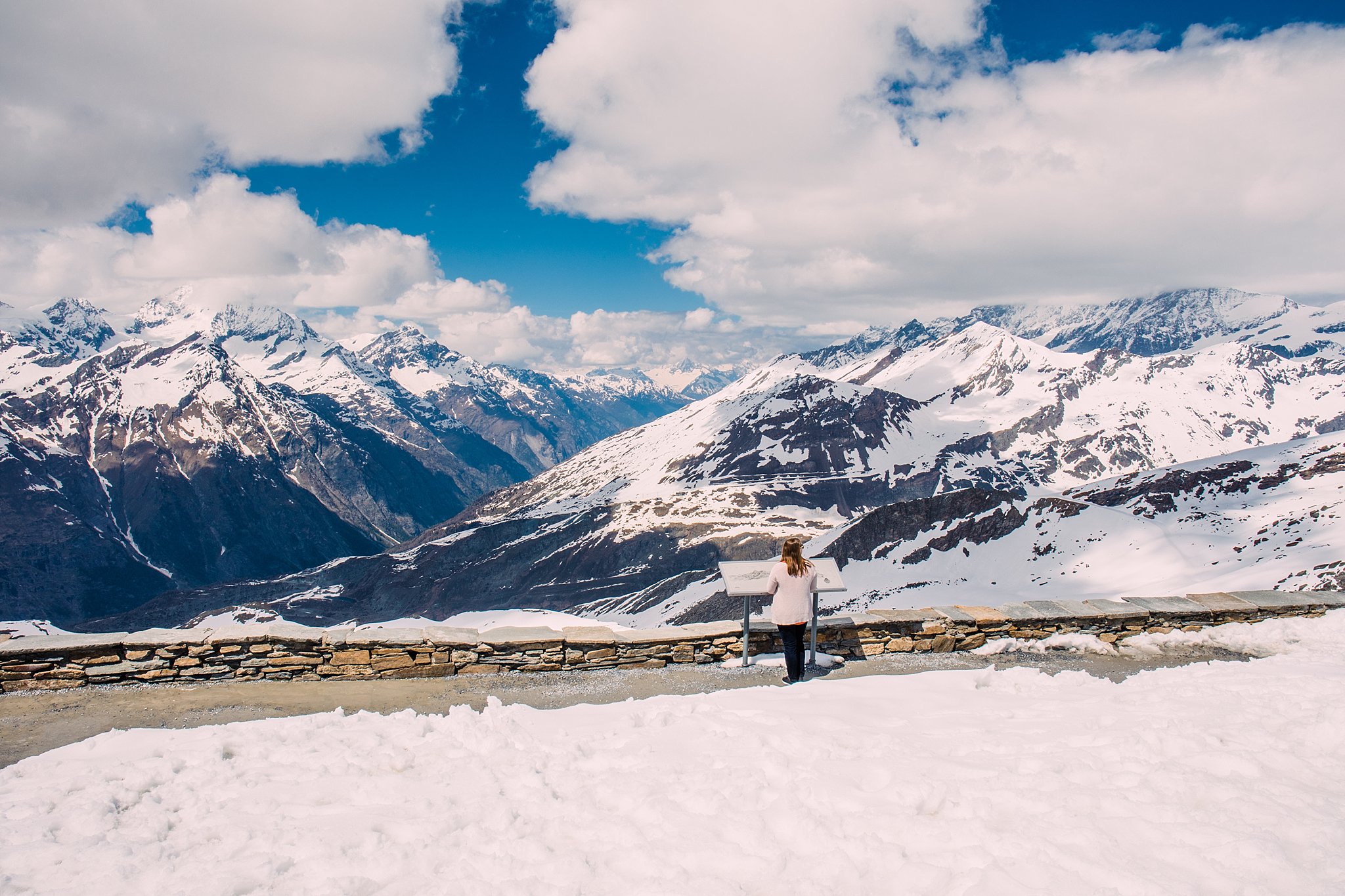 Many people brought a lunch and were enjoying the surprisingly warm day and view. We spent an hour or so up there taking photos in various angles. During the summer, it looked like there were potential paths that you could hike around the area but the area was snow-covered still (in mid-May). Either way, the snow was blinding, so bring some shades and sunscreen!

When we had arrived back in Zermatt, I wanted to wander around the cute little town a little. The town is very touristy in comparison to the other, more quaint towns we had passed through in our travels. I was in the mood for fondue, so after a quick search (using our unlimited Traveler’s Wifi), I found Restaurant Du Pont. 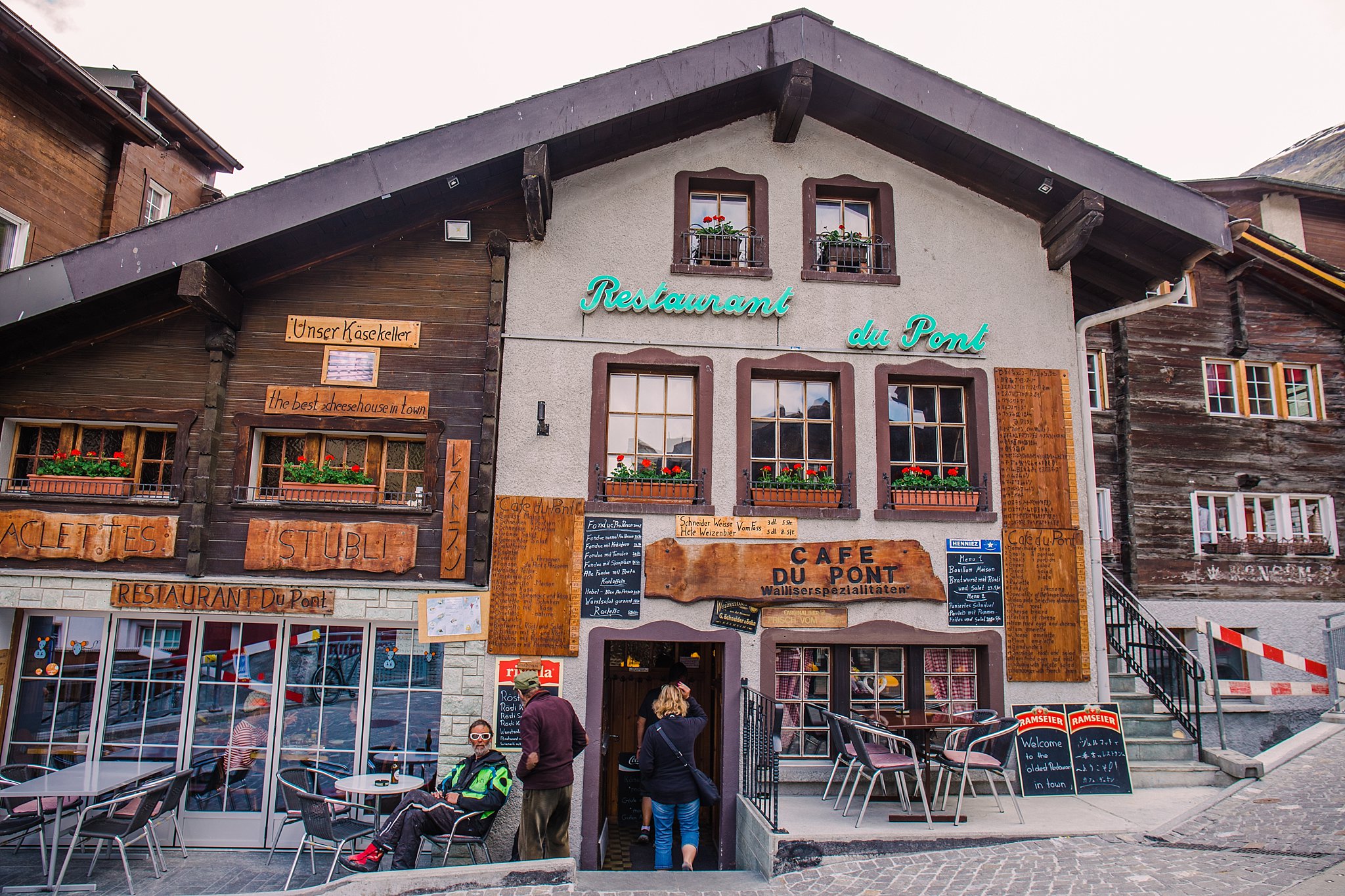 The restaurant calls itself the oldest restaurant in Zermatt. It was affordable and good for a meal after our adventure on the mountain. I felt like the fondue tasted strongly of wine, but was otherwise good. The owner (I think) was there and giving tourists like us postcards with the photo of the restaurant on it. The language barrier was pretty strong, but he seemed pretty nice and wanted his guests to have a good time. 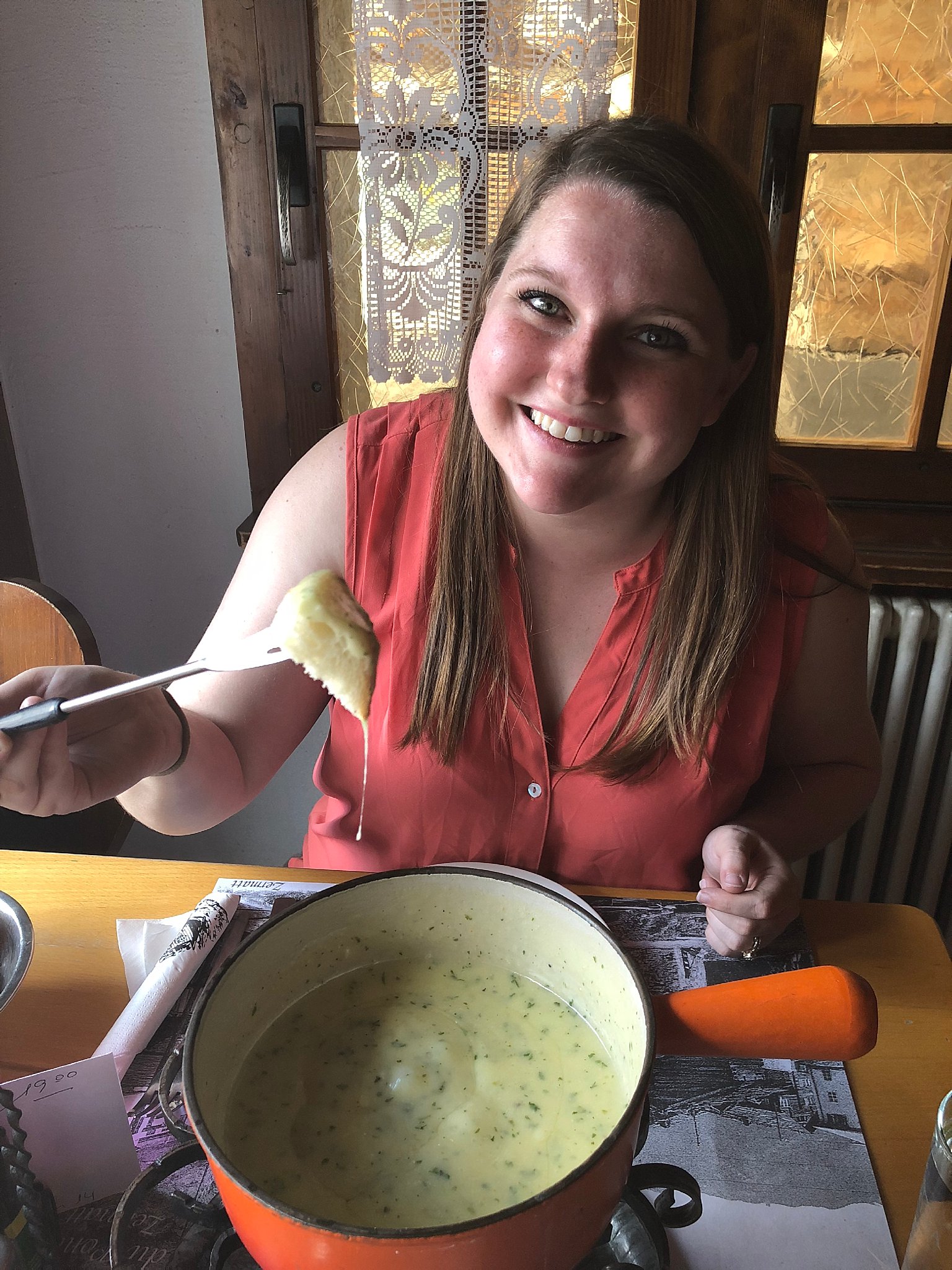 I heard that their rösti was good, but we came for fondue. Neither of us were starving, so we ordered 1 person portion. Their pricing is per person, but they allowed us to split it. The couple that came in and sat next to us asked us about it, and then did it as well. Switzerland can be very expensive, so it’s good to save where you can! Lastly, the portion was more than enough for both of us anyways. Bread, potatoes, and cheese are very filling. 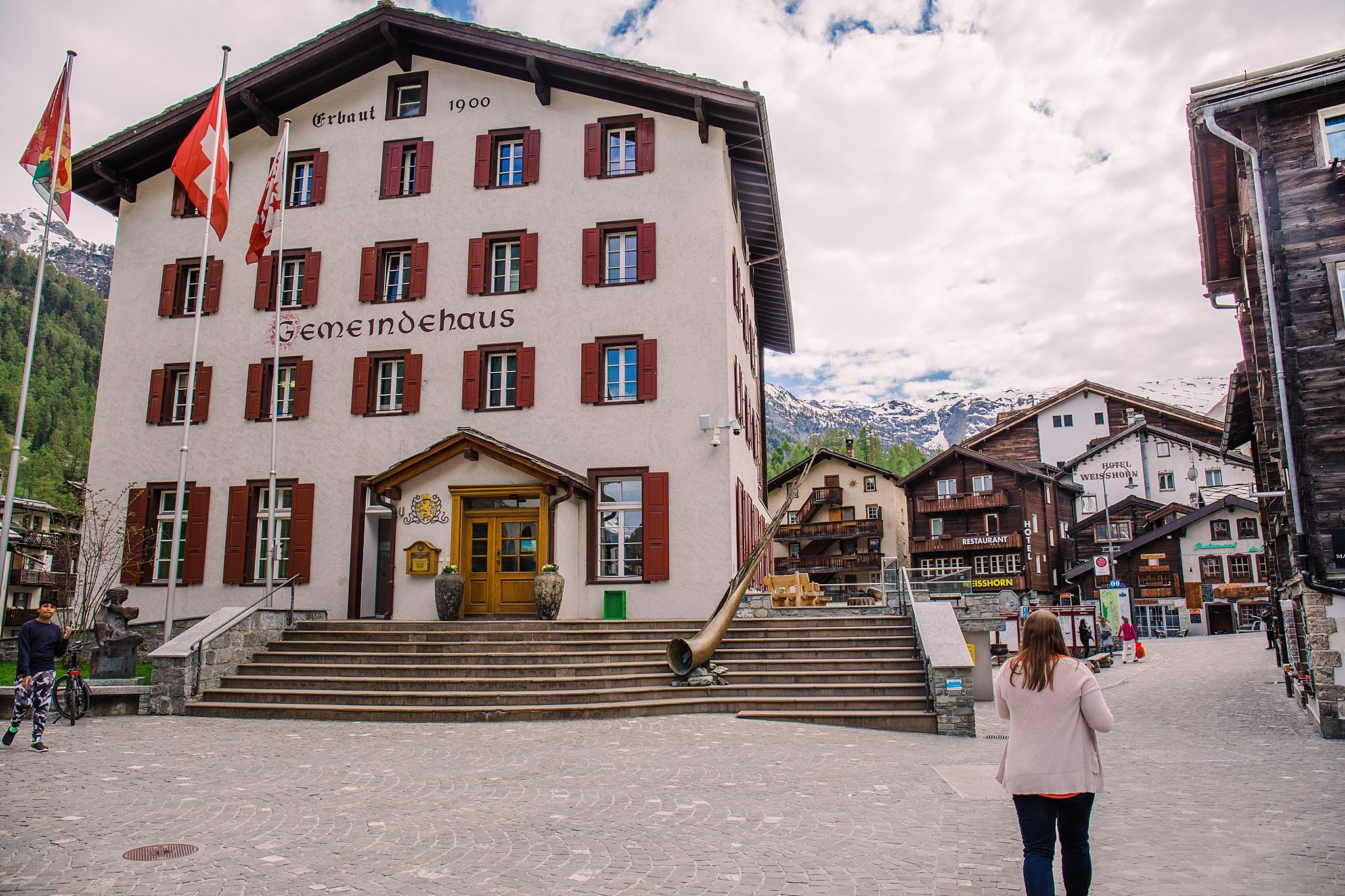 If we had more time in Zermatt, we would’ve done the Charles Kuonen Suspension Bridge which is the longest hanging bridge for pedestrian use in the world. 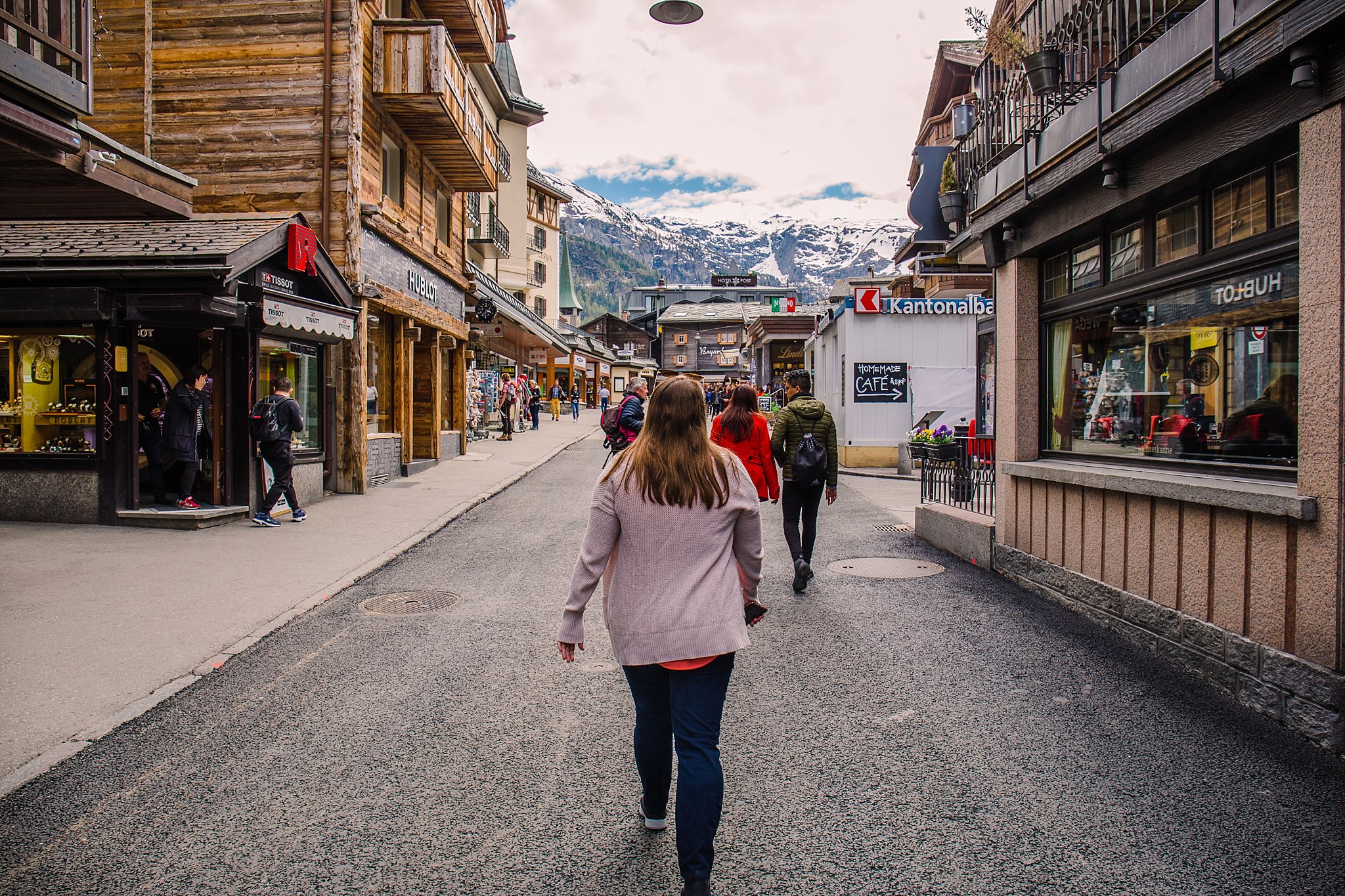 After we left Zermatt, we drove to Adelboden, which is a adorable town located in the Canton of Bern. On our way, we had the opportunity to take the Lötschberg Tunnel in our car through the mountain. It was built in 1907, and it has a single track going each direction for cars to be transported on. Our timing was perfect as we were able to arrive, pay for our ticket (about $28, one way), drive onto the train (!!), and leave. The whole trip lasts about 20 minutes, but it was really interesting to literally drive onto the platform and go. It was cool to see the other cars on the other track passing by. I was also surprised by the train’s speed, and how the cars shook around without any issue. For some reason, that was fascinating.

When we exited the tunnel, we were suddenly surrounded by a vast green, lush landscape with these soaring mountain peaks. Photos do not do this place justice. It’s truly a fairytale country! 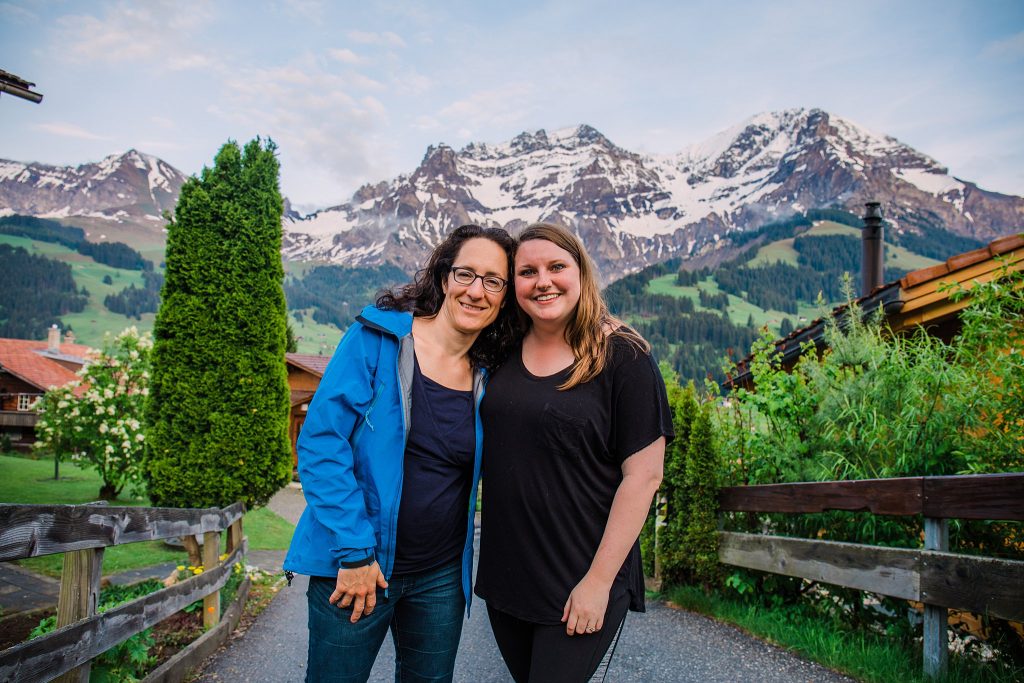 We settled into our accommodations with our Swiss hosts and friends, Martina and Matias, and enjoyed the epic views and sunset from their chalet.

What other Zermatt/Matterhorn activities should I do next visit? 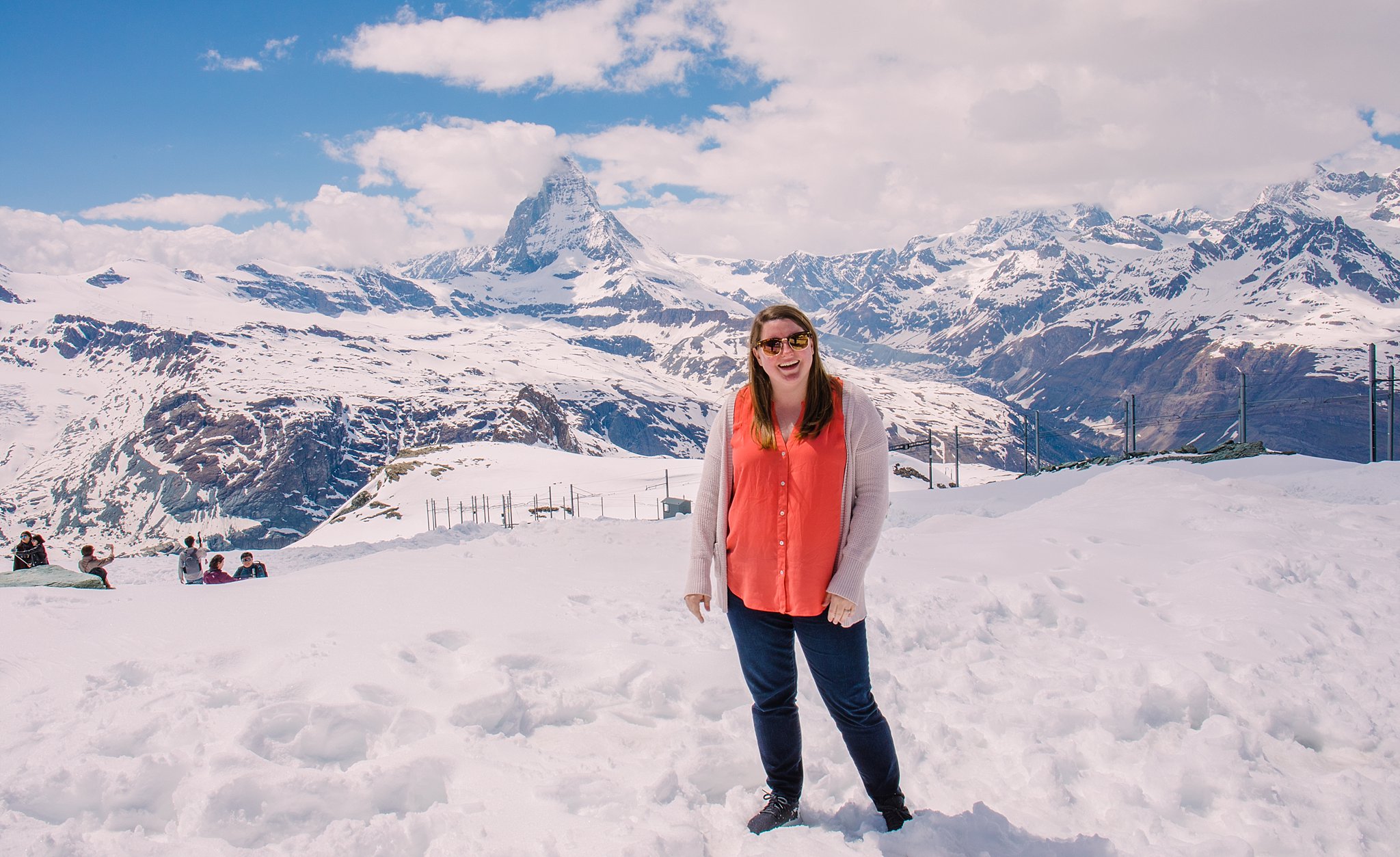