The Engagement & How I Met My Future Husband [Wedding]

Brighton and I are engaged! I am super excited!

Let me tell you some back story about how we met…

How I Met My Future Husband– It was Kismet! 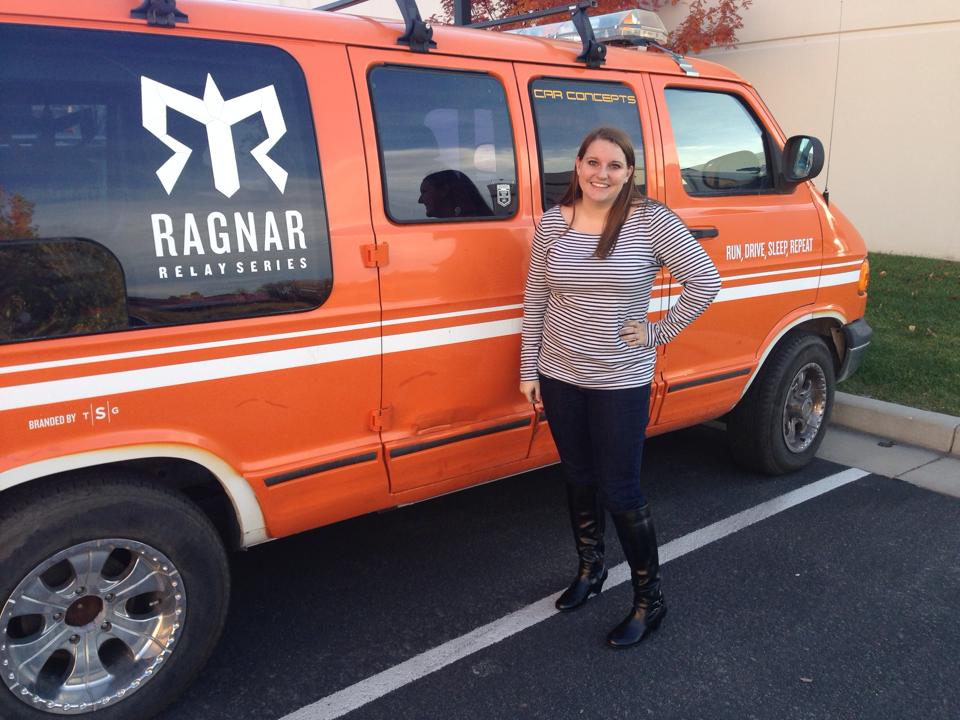 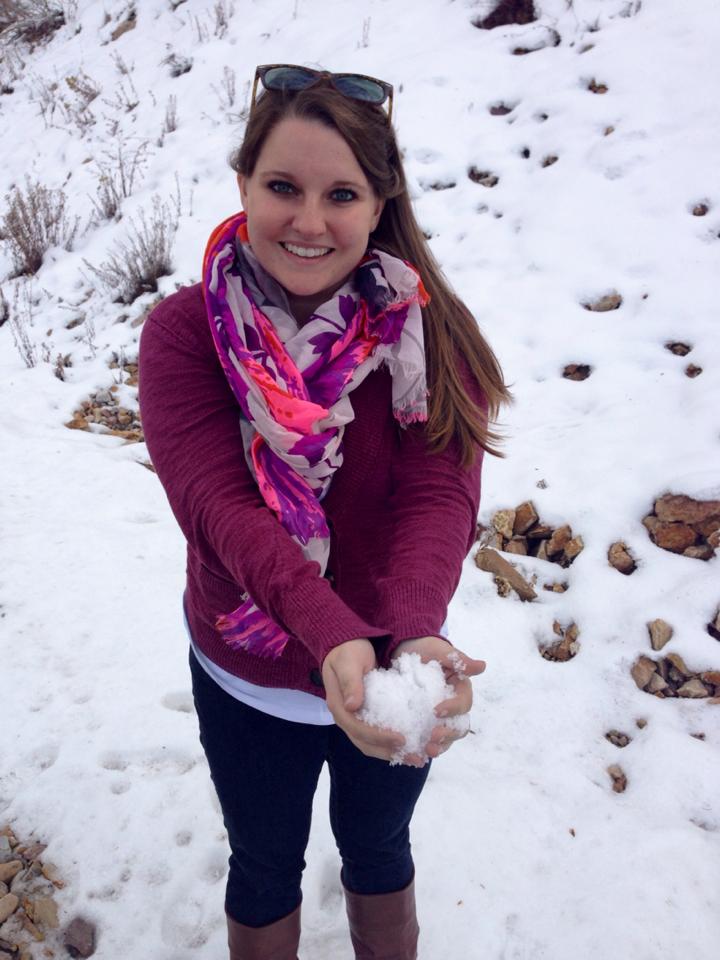 Something that I get asked by people a lot is how Brighton and I met. Well, as you all know, I moved to Salt Lake City for an internship with Ragnar Relay Series in my final semester of college. I knew no one. I didn’t even know my new roommate or coworkers. I had been to SLC once in November 2013 with my dad to scope out places to live. I chose to go the airbnb route since my plan was only to be in SLC for 3-4 months, and I didn’t want to sign a year lease and find all new furnishings for something that was supposed to be temporary. I met with about 5 or 6 potential roommates in different areas of the Salt Lake Valley with my dad. Most of them were basements that I didn’t really think would suit my needs– one was in a small suburb of SLC that I didn’t like the surrounding area being boring, the other was in an area of town that was inconvenient to where my internship was. 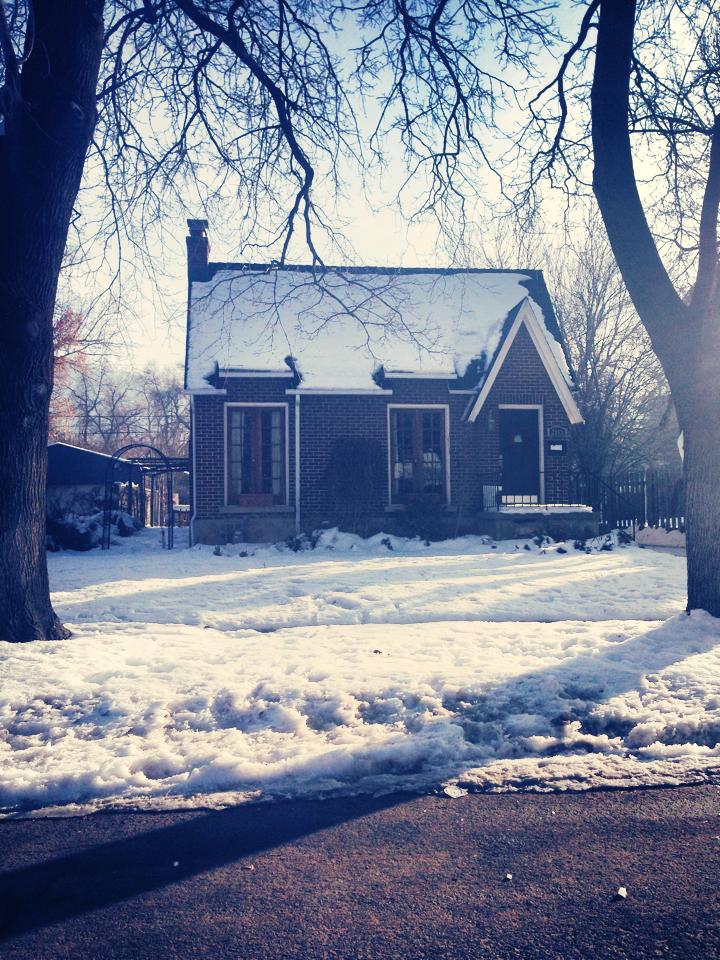 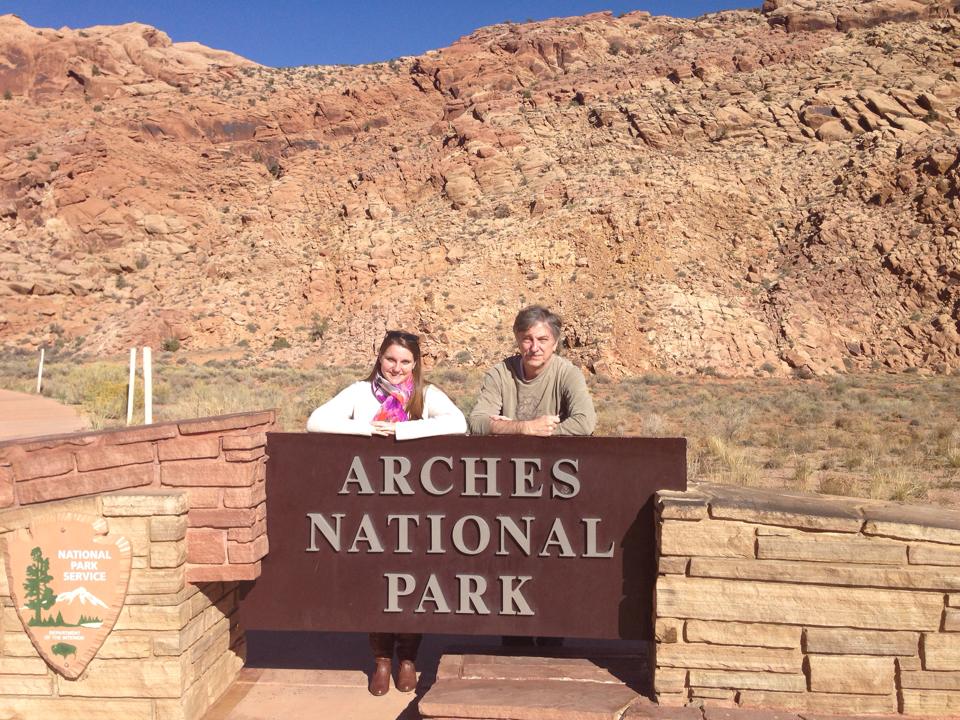 Arches National Park for our first visit to SLC

There was one particular house that I was hesitant about visiting due to the price that was listed online, and I wasn’t sure if it was worth visiting. The homeowner was pretty insistent that I visit though since she had just cleaned for me, so my dad and I decided to give it a shot. Turns out she lived in this super cute neighborhood called Sugarhouse (which later I found out is one of the most sought out places to live in SLC). I also wasn’t sure the gender of the homeowner since she didn’t have a picture of herself online and I couldn’t tell by her name. Once I met Somer (Brighton’s sister), saw her house and her pets (Koda the Golden Retriever and her two kitties), saw the neighborhood, and saw the living space she was offering, I was sold. Plus, there was a park less than a half mile away that I instantly fell in love with! 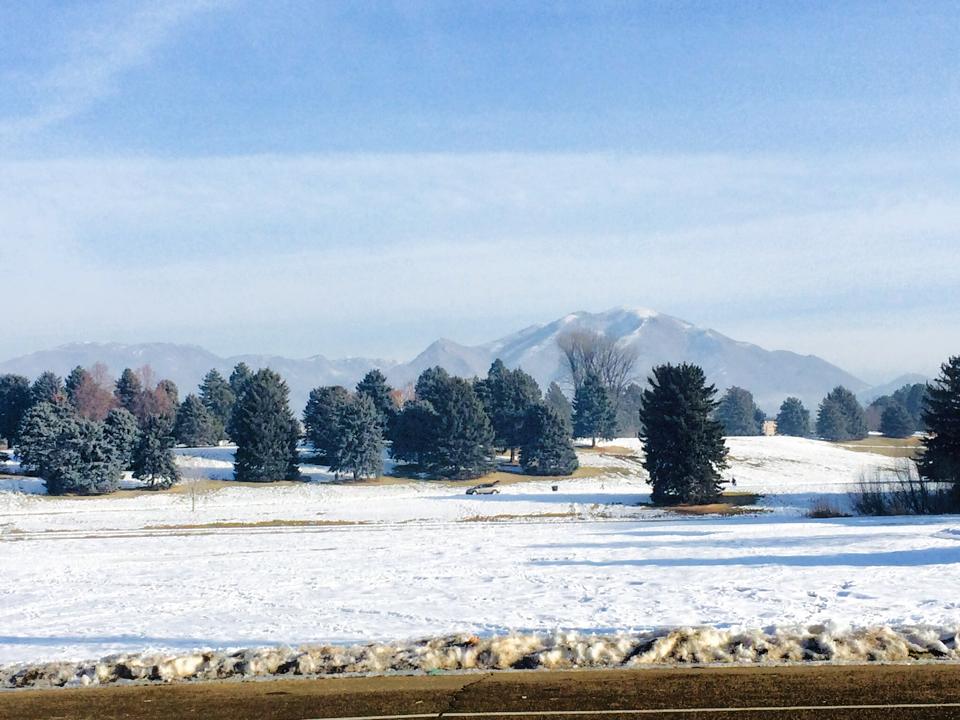 Fast forward to New Years 2014 when my sister Katie came out to Salt Lake with my on our Epic Road Trip. I had caught Katie’s cold that she had at the beginning of the trip, and I was feeling pretty awful. Plus, it was cold– there was snow on the ground which fascinated me (and truthfully, still does)! I was hanging out with Katie downstairs in my finished basement living area, and I wandered upstairs to go to the bathroom and I was faced with Brighton and their mom, Michele. In all honesty, I wasn’t exactly in the social mood and wanted to escape as quickly as possible. Somer introduced us, and I disappeared downstairs again. 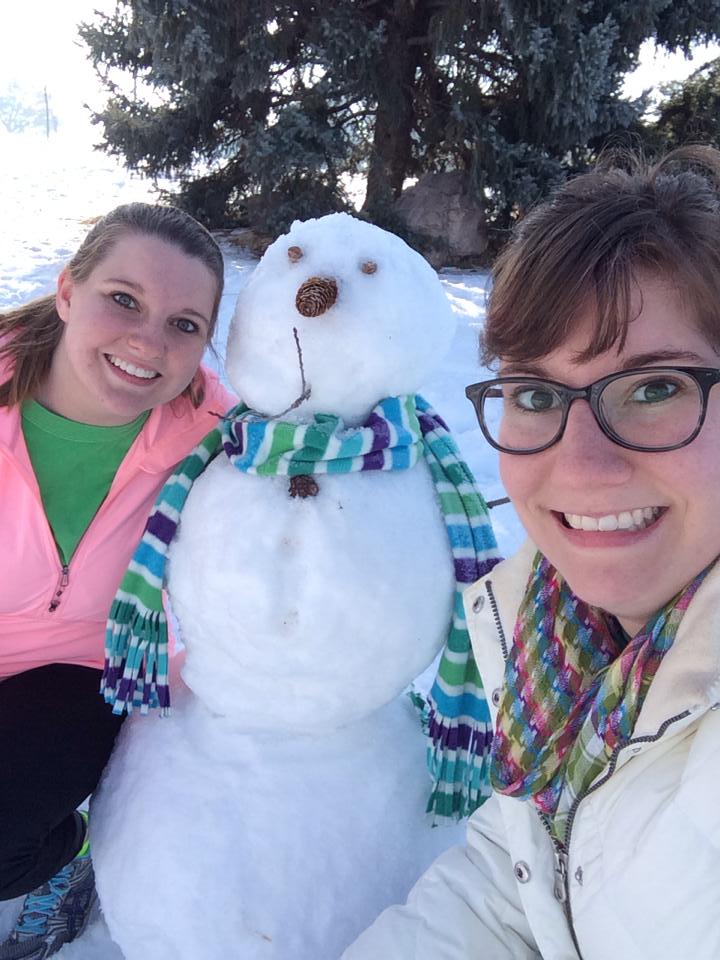 About a week later, I was starting to get pretty lonely in this big city by myself. Somer suggested that I hang out with her brother that I had met briefly. I wasn’t exactly crazy about hanging out with a complete stranger without her support. He could’ve been a serial killer! Just kidding. But, I bit the bullet and texted him suggesting we go to dinner after work one night. I told him to choose his favorite restaurant, and we met there. He chose the Copper Onion in Downtown Salt Lake. I didn’t realize it was a nicer restaurant going in, but it was a little more upscale than I was expecting. 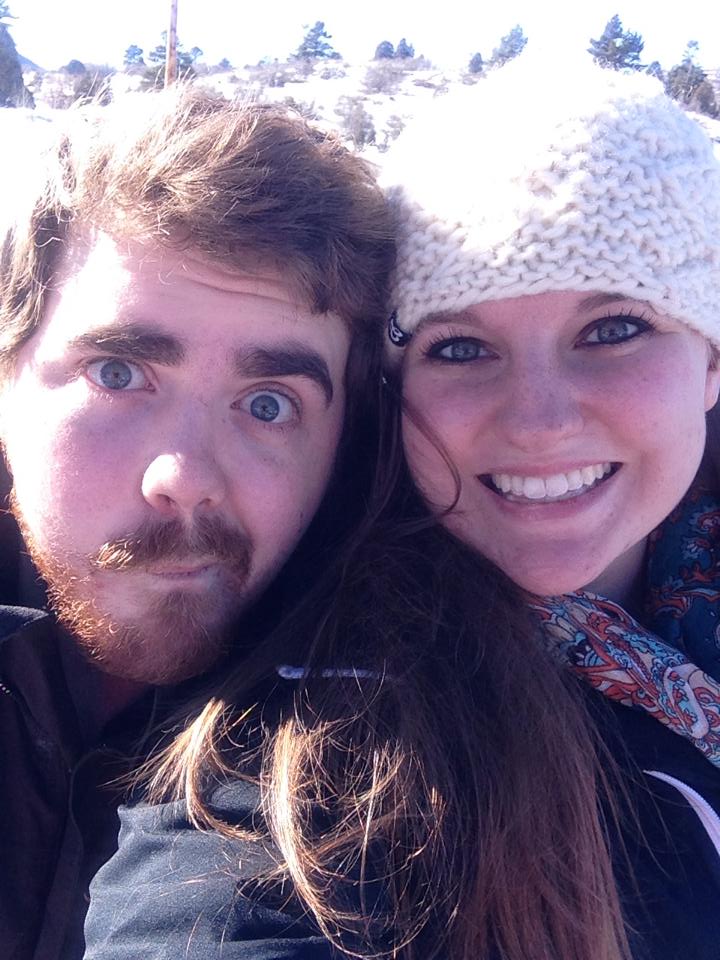 One of our first adventures: Tubing!

We talked for two hours about anything and everything, mostly work and hobby related. I could tell he was nervous, and I thought that was cute. Since we had gotten along well enough, and I had no other friends, I started inviting him to join me on little outings (or adventures, if you will) around the area. I was in this brand new exciting place, and I just wanted to explore! He agreed to come with me, and I drove him everywhere. At the time, he lived downtown and didn’t need a car so I was the default driver. 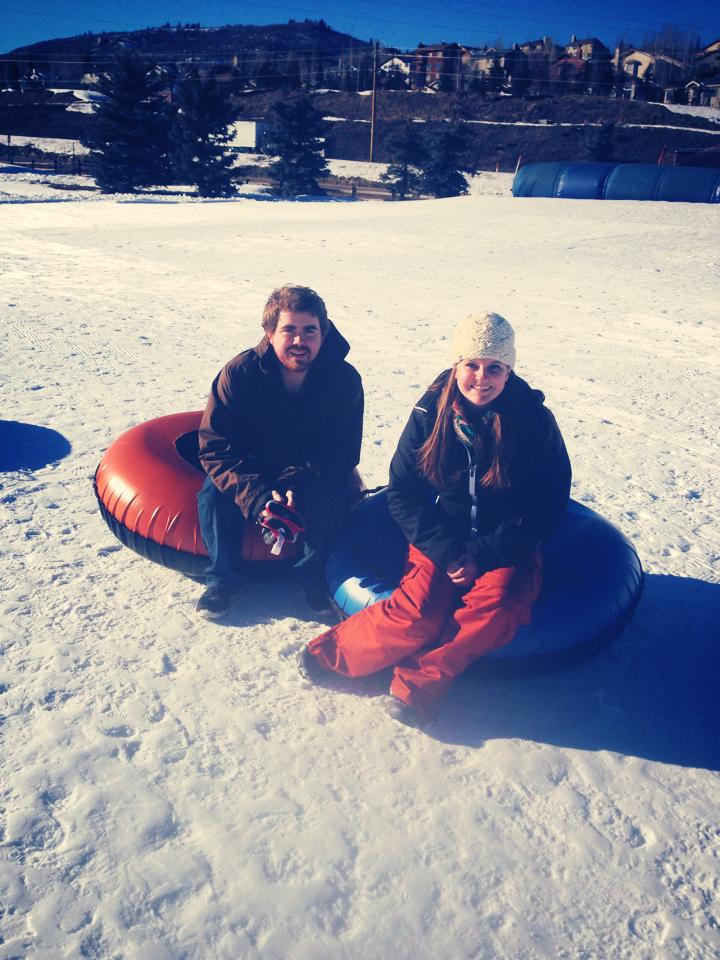 Tubing in Park City with Brighton 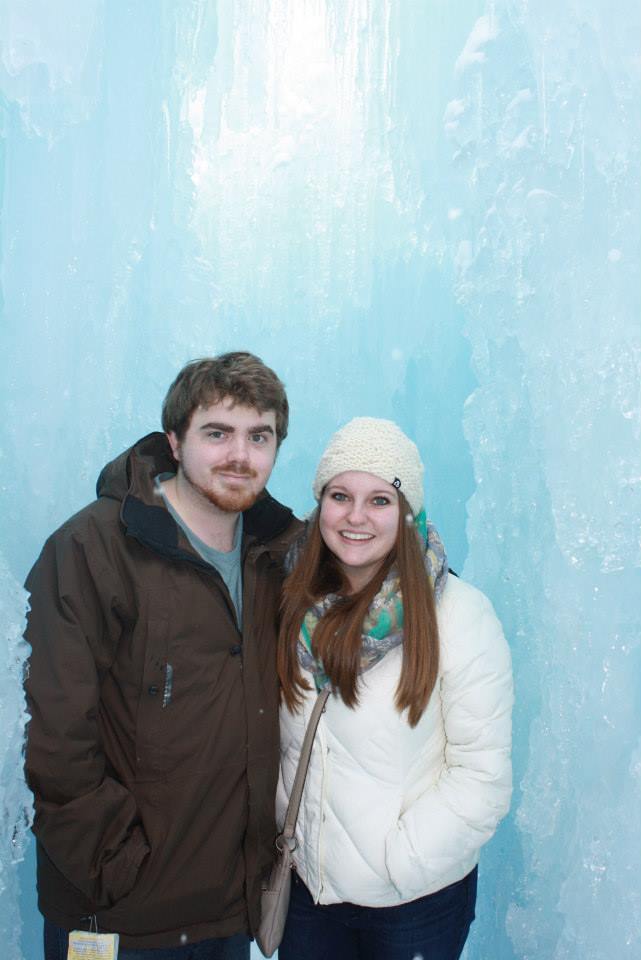 One of my favorite memories is when I drove up to Park City to meet him and his friends for a concert, and when we got out of the concert around 1am, it was snowing! Real snow. Not just flurrying. It was my second week of living in Utah, and I had to drive down this treacherous stretch of Interstate-80, Parley’s Canyon. It’s a big, steep, and winding canyon that I don’t like driving even during broad daylight during the summer. It was late at night, and snowing heavily, but I was determined to get back to SLC. He braved the passenger seat with nervous me driving, and talked me through the drive home. He was very calm and patient with me as I weaved back and forth between lanes at 30 mph. (The speed limit is 65 mph). I couldn’t see the lines and kept getting stressed since the snow was blending into the white lane marks. (Wikipedia defines “Whiteout” as: “The horizon disappears completely and there are no reference points at all, leaving the individual with a distorted orientation.”) That’s scary!! 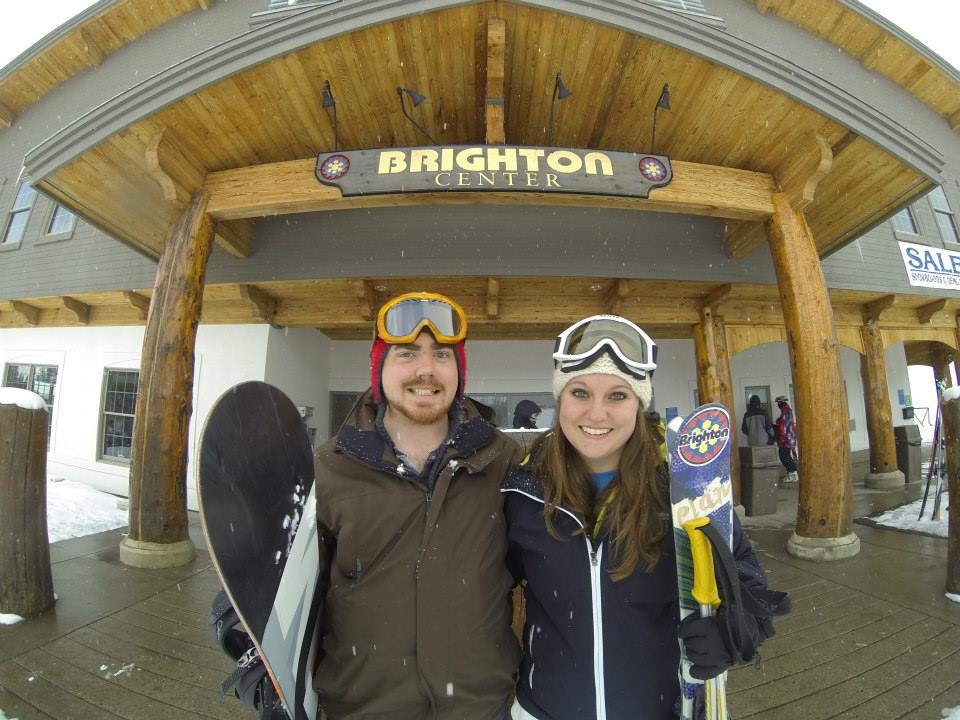 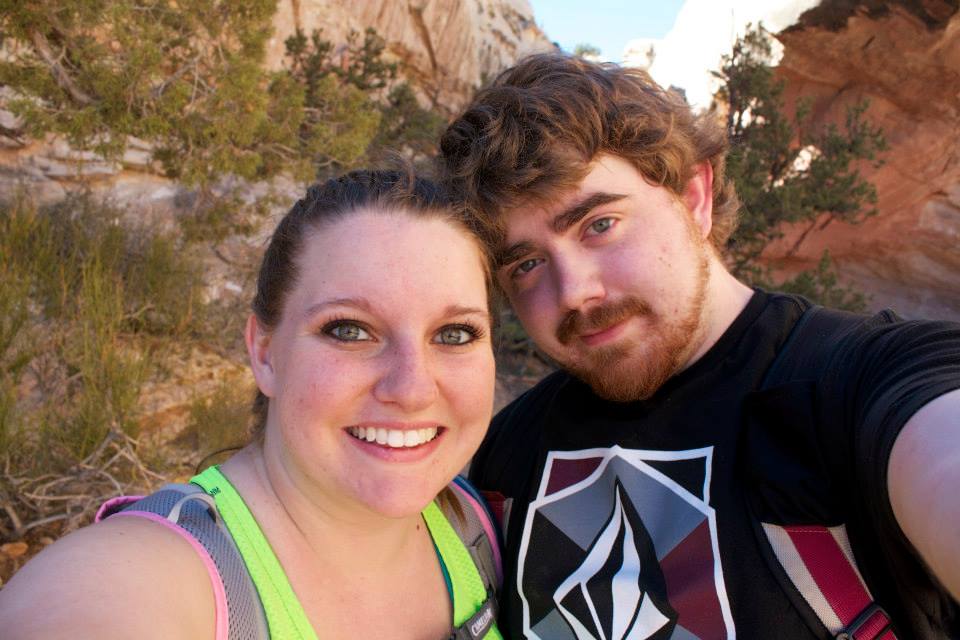 Anyways, we continued on adventures as friends until April 1st/2nd of 2014, and officially started dating then. He came to my graduation in May in Florida! He got to meet all my friends and family back home and was a champ through the whirlwind of activities. I’d be lying if I didn’t see a forever future with him after all of that and more. 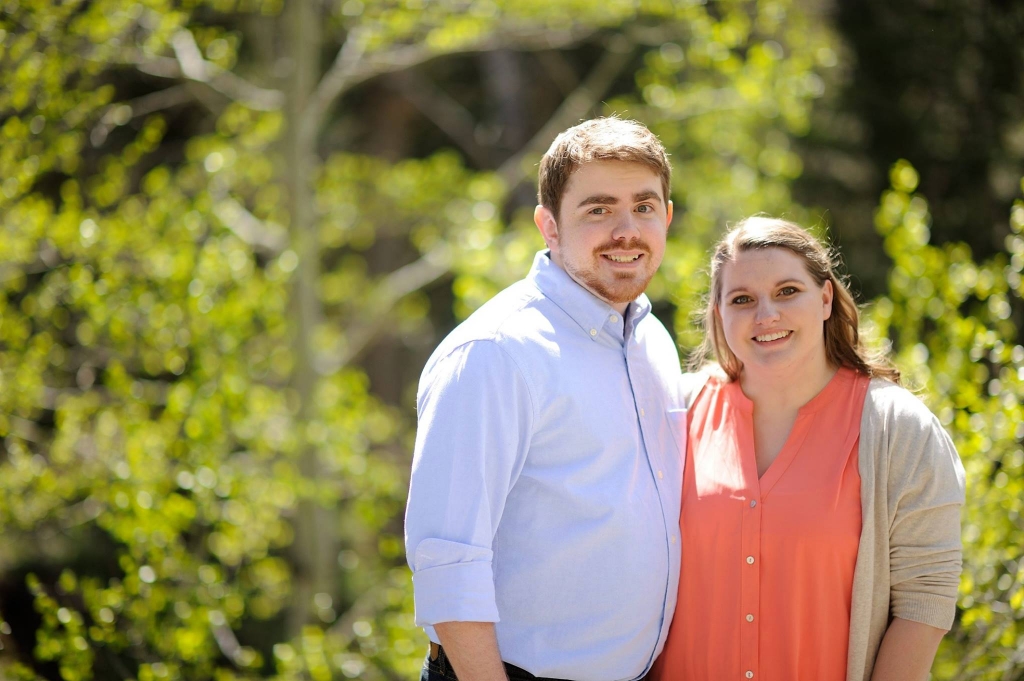 I have a confession. Our engagement was not a surprise. We had discussed our future many times, and it was mutually agreed upon that we would be getting married in the somewhat near future. In late January, we went ring shopping. I’m not sure how Brighton would enjoy picking out a ring for me…And I wanted a say in the matter since it was going on my finger for the rest of my life. 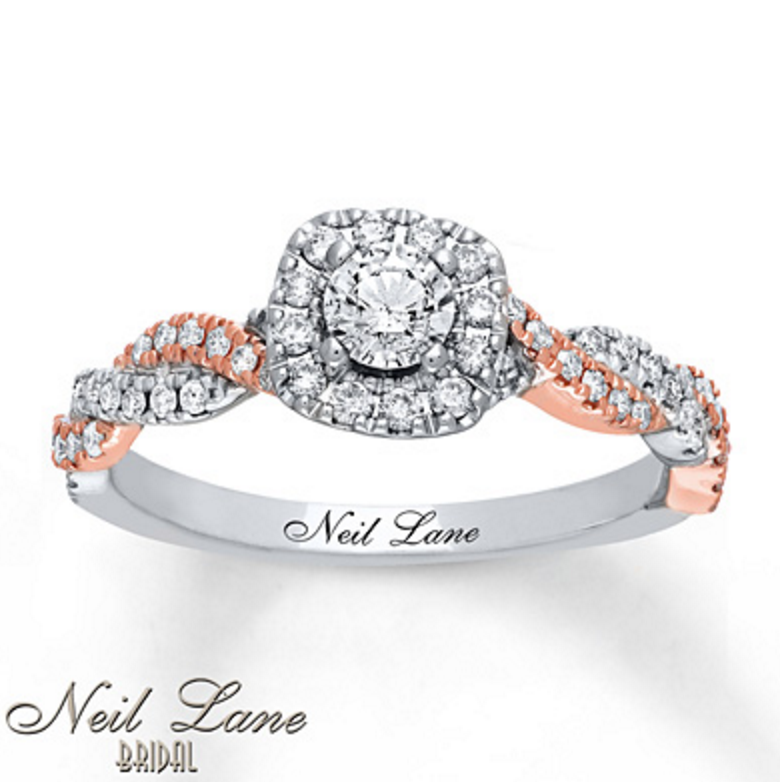 We went to Kay first, and after a few rings I found one I really liked. It was a twisted band with rose gold and white gold, with a rounded square halo cushion. All those terms were mumbo-jumbo until we got into shopping. I knew I liked the twisted look, and I didn’t like regular gold. That’s all the information I started with.

Despite finding a ring I really liked on our first trip, we kept shopping around. Eventually we went to Jared, and I found two rings that I really liked that were similar to the one that I found to begin with at Kay. I realized that I was comparing all of the rings to the one I really had my heart set on at Kay, so we went back to Kay and ordered that one.

I have super tiny hands! Size 4.5-5 for rings. So they had to order mine in my size, and I wore a ring with a sizer for a few weeks. 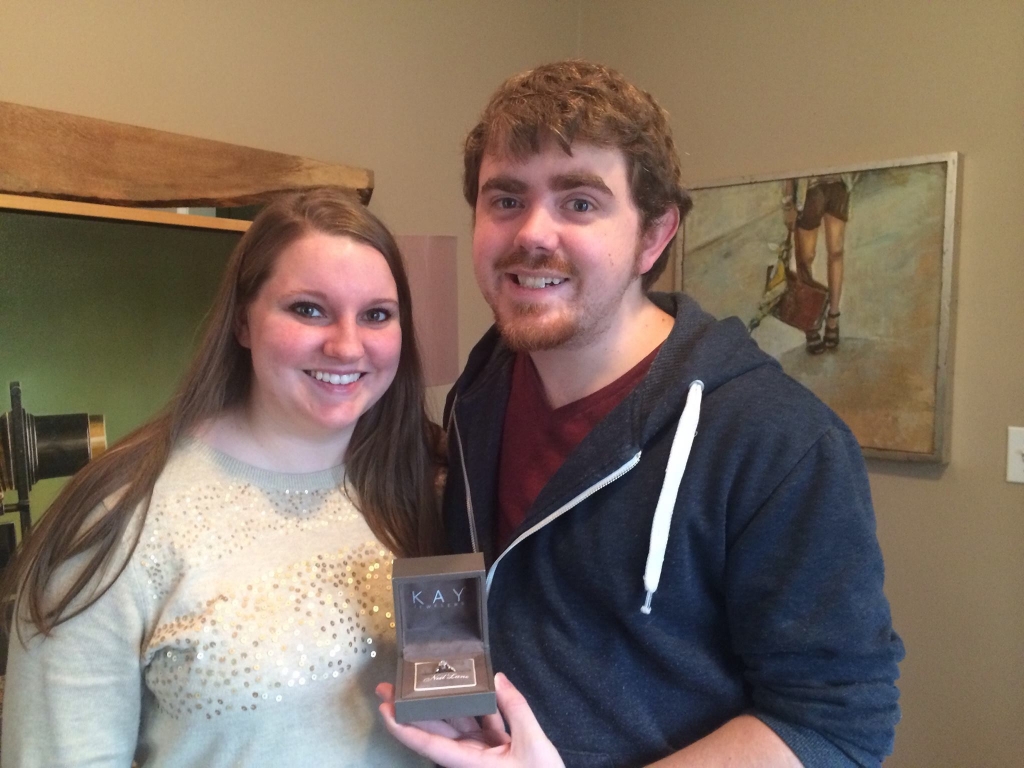 After we bought the ring, we went to show Somer at the place we met– her house!

As soon as we bought the ring together, I wanted to wear it all the time. I am impatient. I will admit it. I wanted the elaborate engagement surprise, but I also didn’t want to wait for that to happen. I also think that Brighton felt the pressure to deliver, so we agreed to a compromise. Our compromise was we’d get engaged at home, in private and potentially do something elaborate later. We settled on a trip to Crater Lake National Park for Valentine’s Day a few weeks later to celebrate.

First he proposed to me on one knee, but he had a hard time taking it seriously. I decided I wanted to propose to him too. I realized that it was way harder than it looks! I made myself cry with happiness. Who does that?! Oh well, then he tried it again.

In the end, our engagement was very “us” and representative of our relationship. I’m glad that it went the way it did.

We called my family back in Florida and told my parents. They were a little surprised by the news, more by it being so soon rather than the news itself. They were happy for us, and I informed my friends after that. After the close friends and family found out, we posted it on Facebook. After all, nothing is official until it’s on Facebook, right? Just kidding. It was all very exciting. 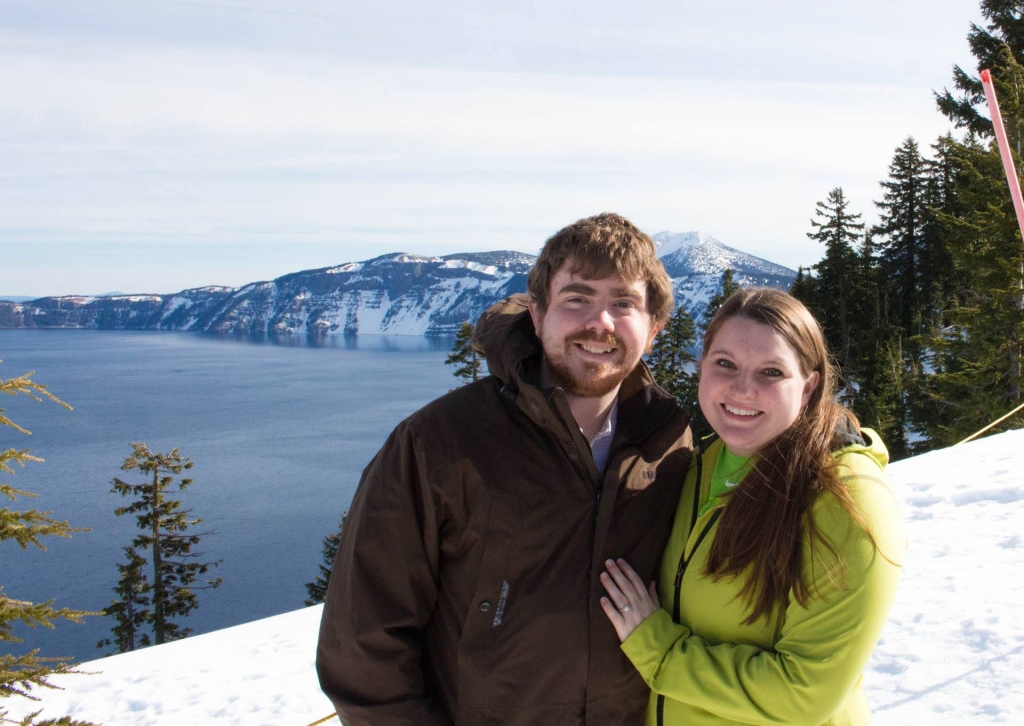 Celebrating our Engagement at Crater Lake

A couple weeks later, we took a trip to Crater Lake and celebrated by ourselves doing our favorite thing– road tripping to a national park! It was also our longest road trip together so far, and we did not kill each other! Just kidding, it was a nice drive with the exception of his audiobook reader really terribly singing the songs in the Lord of the Rings books.

So that was the story of our engagement! Low key, but perfect for us. 🙂 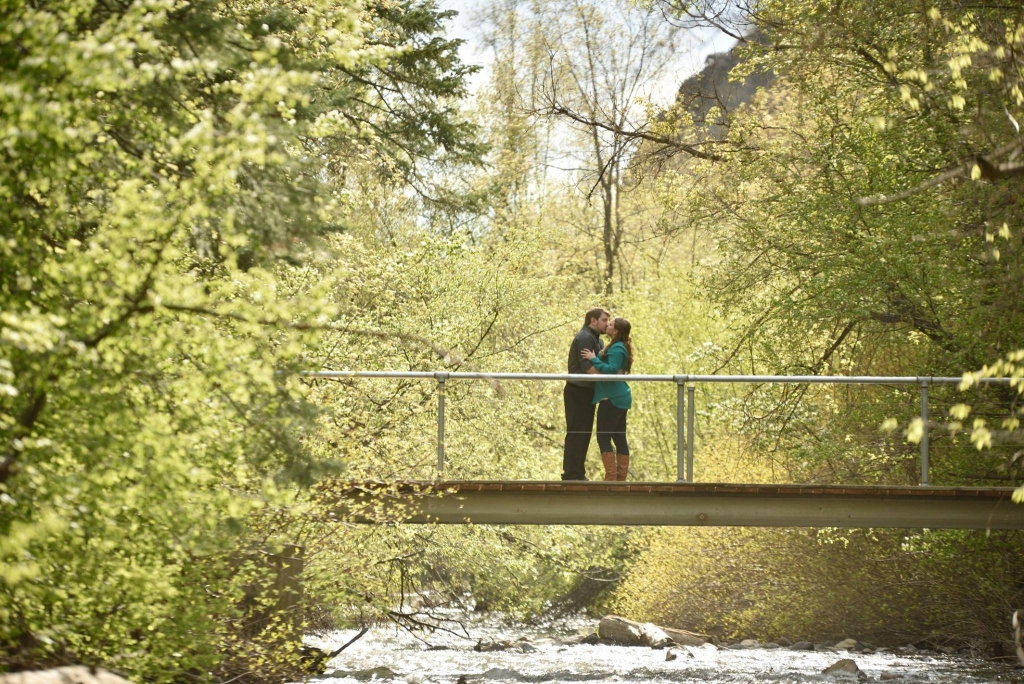 Do you have any stories from your engagement? Was it low key or an elaborate surprise?