I had been looking forward to having my bachelorette weekend for quite some time. I rarely get uninterrupted/rushed time with my closest friends in Florida, and never together at the same time! Originally we looked at going to Key West, but it was still Spring Break for many colleges and schools, and we didn’t want to pay way more than necessary. We also looked at going to New Orleans, but I wanted something that was more than just drinking. I also wanted to go somewhere new! I had been to Savannah when I was a kid, and vividly remember touring the Juliette Lowe House (Girl Scout Founder), but that’s about it. Savannah won! 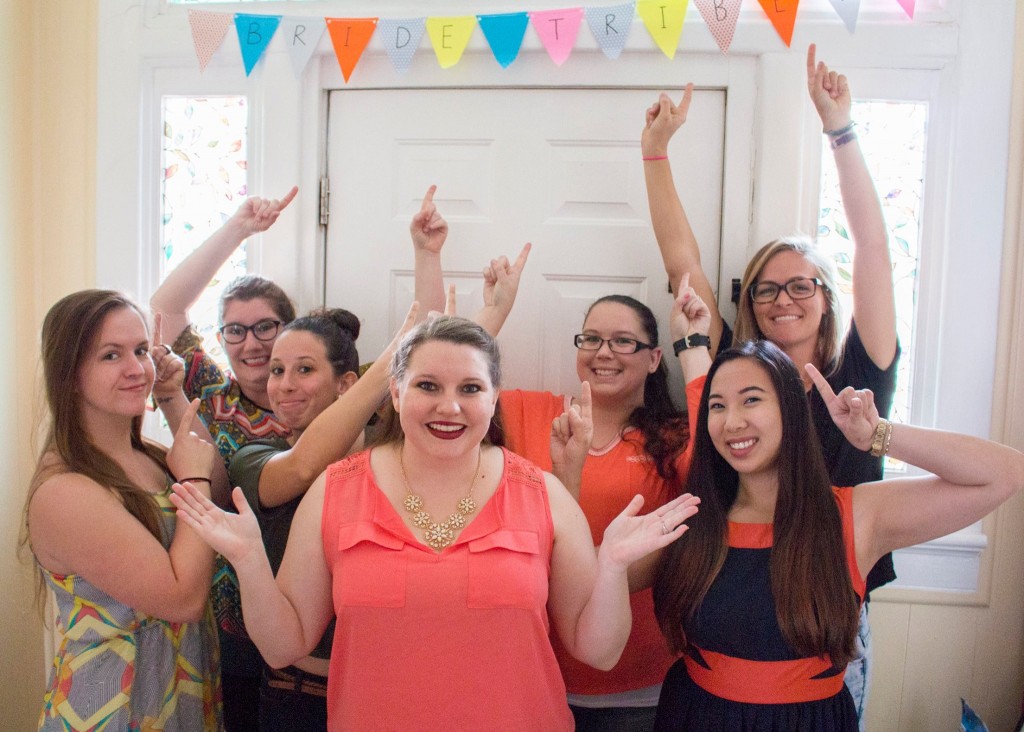 On Friday morning, we gathered all the St. Pete bridesmaids (plus me and Katie), and set off on our journey to Gainesville to pick up Demi. My two Orlando bridesmaids, Elizabeth and Wannee, chose to drive straight to Savannah since it didn’t make sense to make an extra stop in Gainesville. Our our way to Gainesville, traffic was at a standstill in several locations. Apparently there was an overturned semi truck carrying milk on I-75 that held traffic up for quite a while. Our mood wasn’t soured though because we all got to know each other better by answering 36 Questions to Fall in Love together. 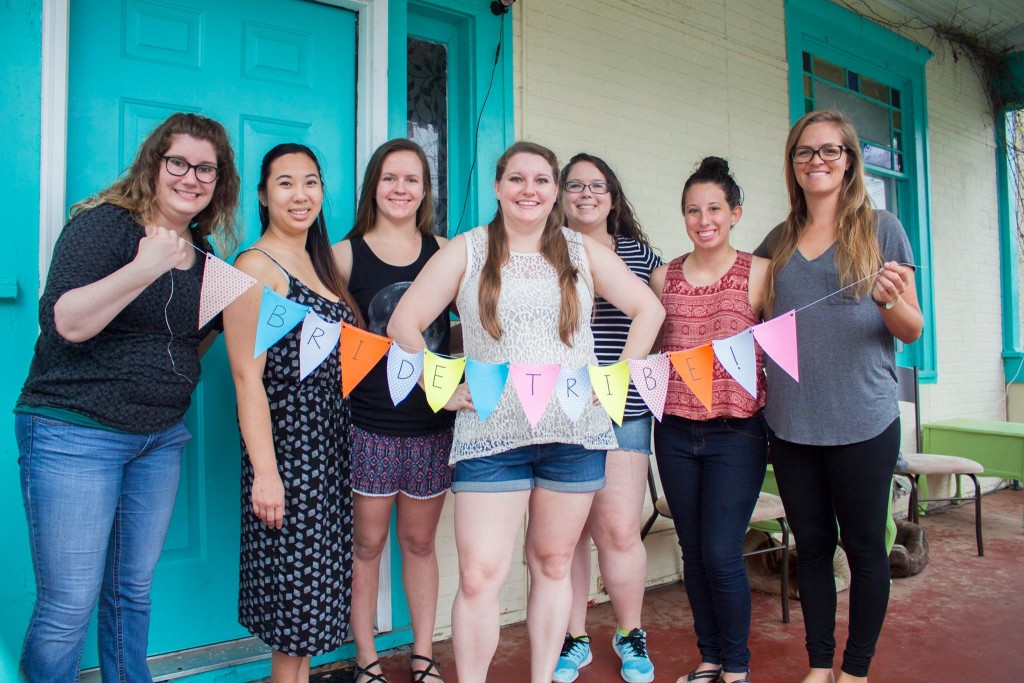 Erica was our trip planner for the weekend, and she found this great house in Savannah. The location close to downtown for us to Uber pretty easily. It was the perfect size for our party of 7. We got the entire house to ourselves, and we could come and go as we pleased. 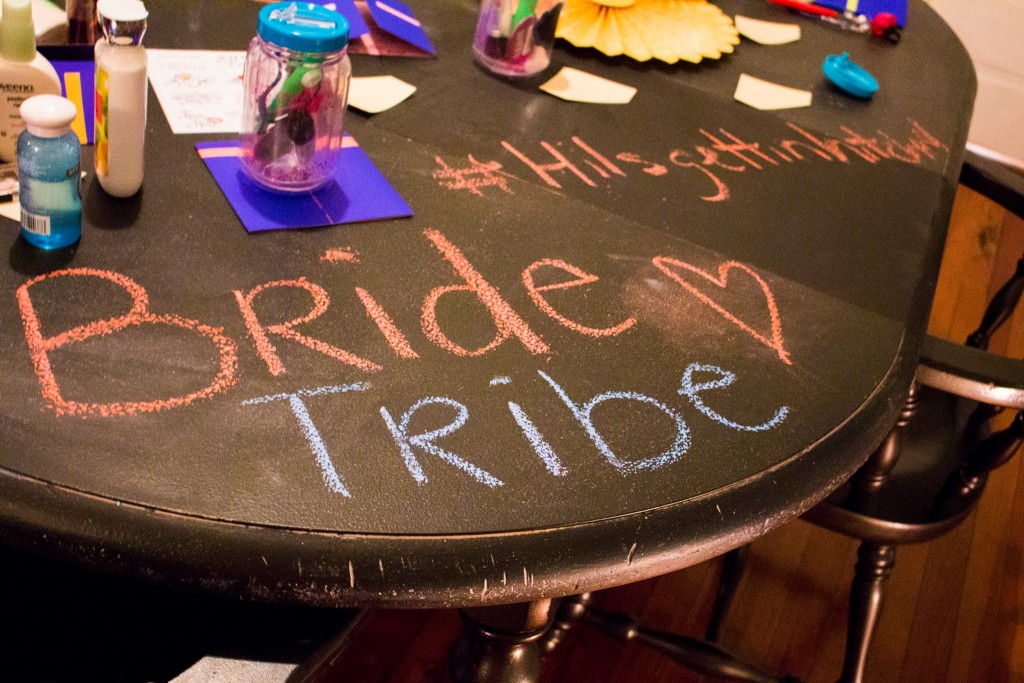 The host had a chalk table, which Erica and the bridesmaids surprised me with a bachelorette weekend survival kit and a schedule of events! 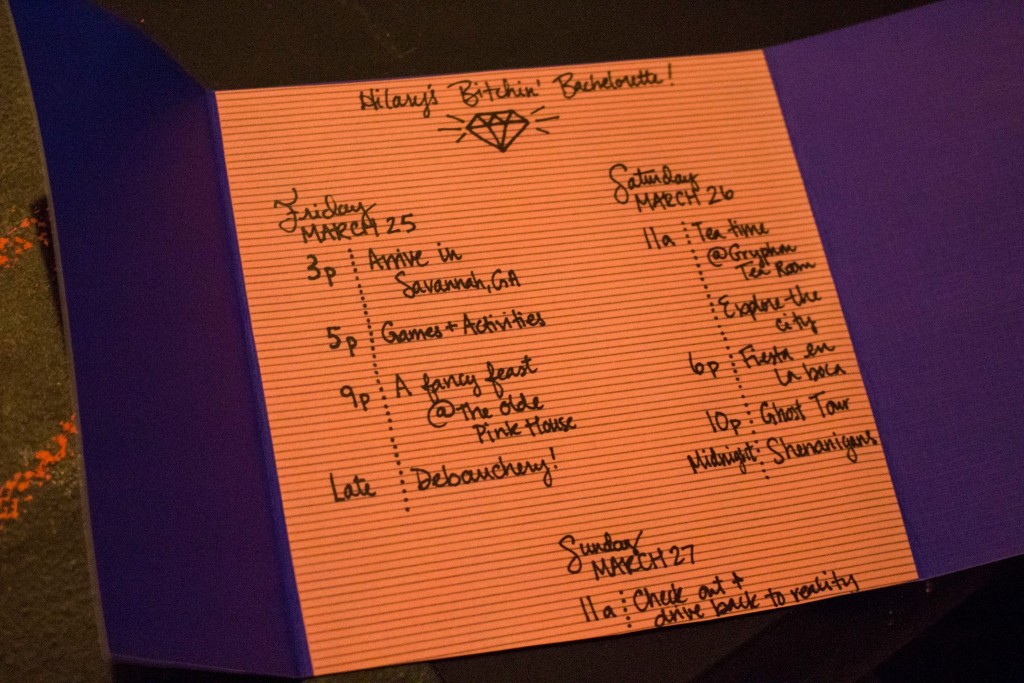 Since we did have such a large party that didn’t fit in either of our cars, we Ubered around town in Uber XLs. They were hit or miss on having enough seats. It wasn’t a problem though, and I’d recommend doing the same in foreign cities. We didn’t have to drive or guess on where we were going, we didn’t have to pay for parking, and nobody had to play DD. It’s a win/win/win! 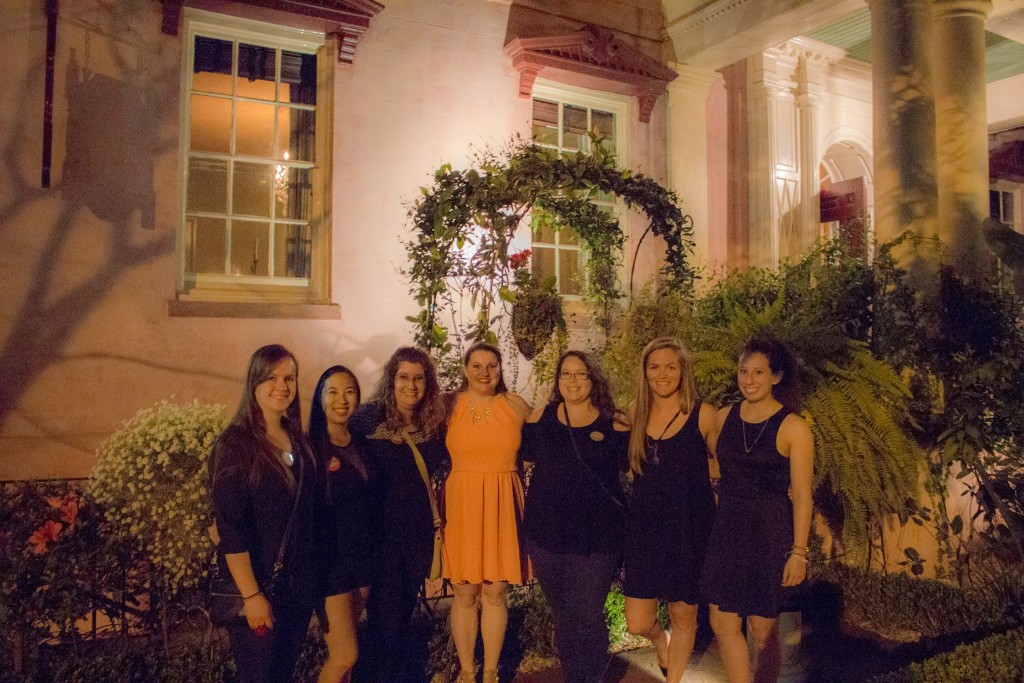 In celebration of the weekend’s festivities, we wanted to go out and have a fancy dinner in an iconic Savannah restaurant. After reading Yelp reviews, I chose the Olde Pink House. The historical significance is pretty cool. It’s Savannah’s only 18th century mansion.

A little history lesson about the significance of the house:

This Georgian mansion was built in 1771 for James Habersham Jr., one of Savannah’s most important early cotton factors and founding-family members. The lot was originally a land grant from the British Crown. The building is a fine example of colonial architecture, and one of the few buildings to survive the fire of 1796. The Bolton family, sister and brother-in law of architect William Jay, occupied the house from 1804 to 1812. Between 1812 and 1865, the house was home to the Planter’s Bank and First Bank of Georgia. It also served as headquarters for Union General Zebulon York in 1865.  – Source

We had 9:00pm reservations, which when we booked seemed pretty late, but luckily were perfect timing for our later than anticipated arrival to Savannah. 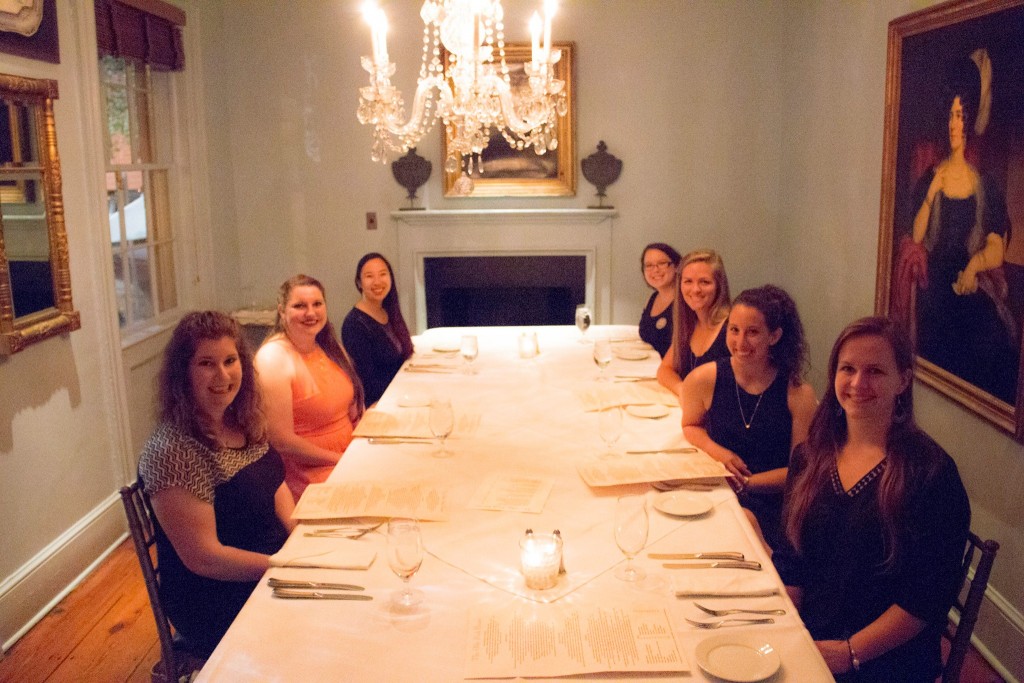 We were seated in our own room, the Conference Room. Since this is literally a house that we were in, the rooms were shaped as you’d expect for an older house. The service was excellent, and we felt like royalty. And so were the cornbread and biscuits. Yes, Southern cooking! We ordered a few appetizers, including scallops and a cheese and cracker plate. There were two scallops. I was a little disappointed, but nothing surprises me at fancy restaurants anymore. I ordered a filet mignon with potatoes and asparagus. The steak was pretty good, but it was no Ruth’s Chris (a.k.a. the best steak I’ve ever had). I was satisfied though. I had my girls all together for the first time in a new exciting place! 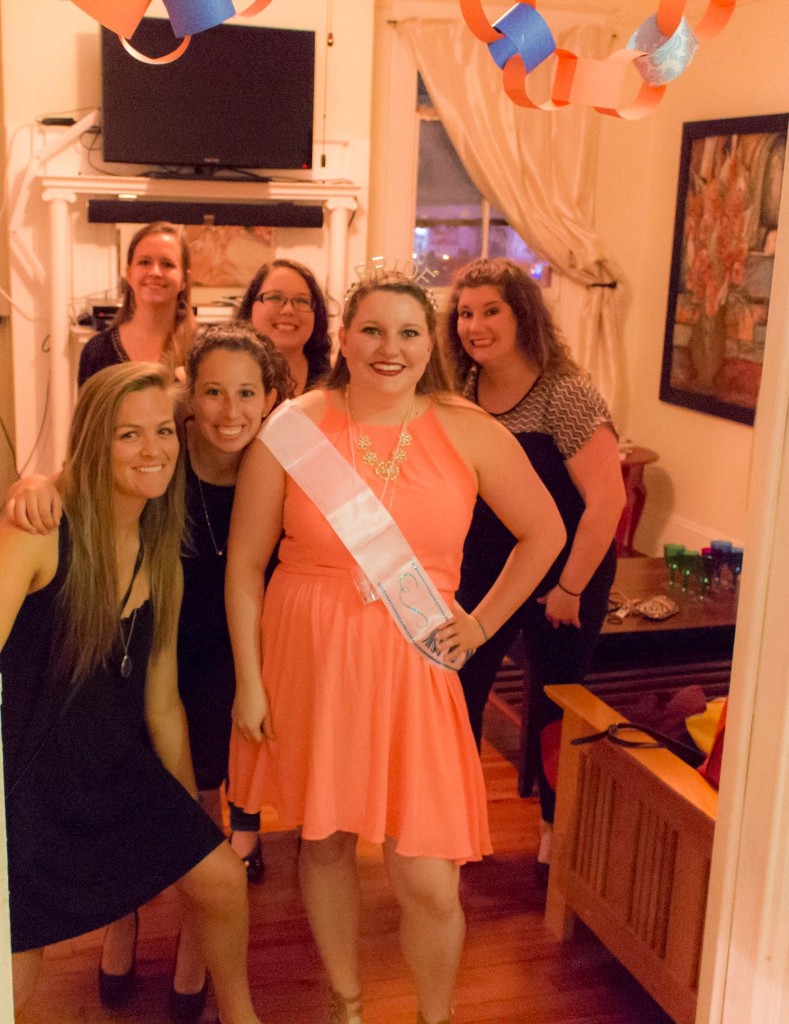 Erica and I had decided that the bridesmaids would dress in black, while I wore a color. I went shopping the day before leaving SLC, and found a cute coral dress at my favorite place, Francesca’s.

After dinner, we headed towards the nightlife with some suggestions from our servers. I don’t venture out into SLC nightlife much, but I felt like Savannah’s bars were pretty busy, especially since it was a Friday night. I could not tell you what bars we went to, since we went to quite a few, but the first one was called The Treehouse. It had some fun music and a good vibe. There was one particular fellow that would not leave us alone though. It was pretty frustrating, but other than that we had a great time. 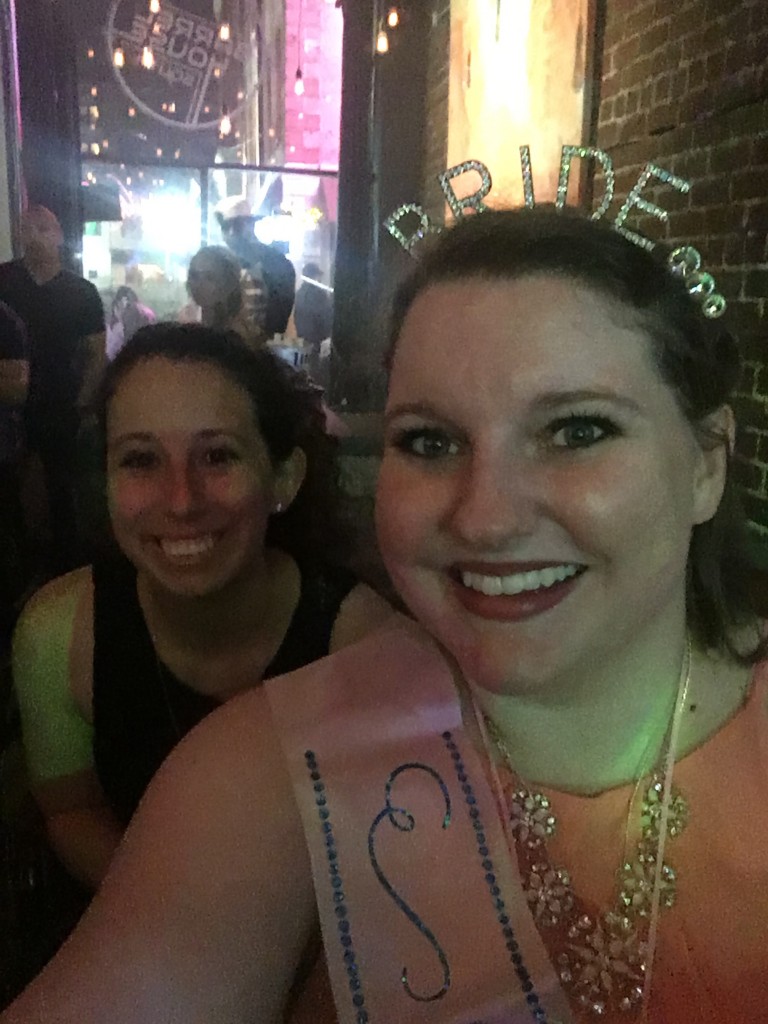 This club had live music. They were playing a reggae version of Get Low by the Ying Yang Twins. Ha! 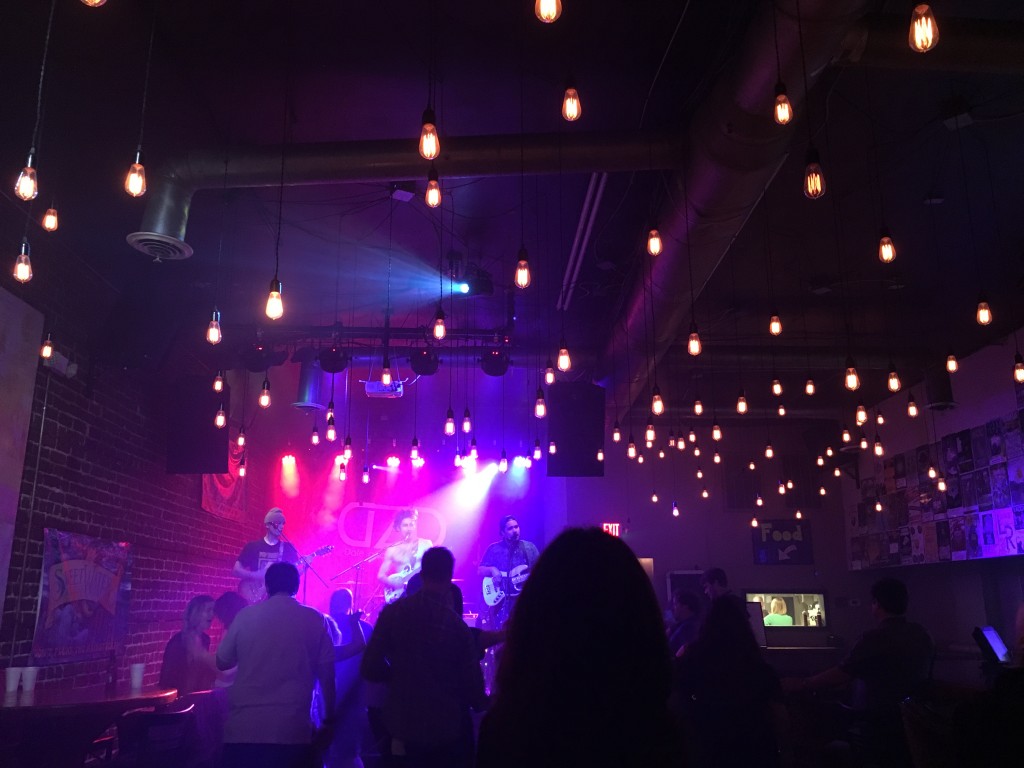 We did end up at another club with three levels of different music, and we got to the top one where there was no one else. We had the dance floor to ourselves and had a fun time dancing as a group without any unwanted attention. For the record, we were told by some bar hoppers that we were the “one of the classiest bachelorette parties” they had ever seen. It was probably our lack of penis paraphilia that did it. Apparently, Savannah has become a popular place for bachelorette parties.

At the end of the night, we Ubered home in two groups. Some of the girls ended up at a pizza joint in downtown that they said was amazing! I guess I missed out. Oh well!

The next day, I was a little slow moving out of the gate. It’s understandable after a night of bar hopping though. While I was slowly recovering, a couple bridesmaids went to the grocery store to get some fixins’ for dinner later that night. One of the positives of having an entire house to ourselves was a fully functional kitchen and two bathrooms! 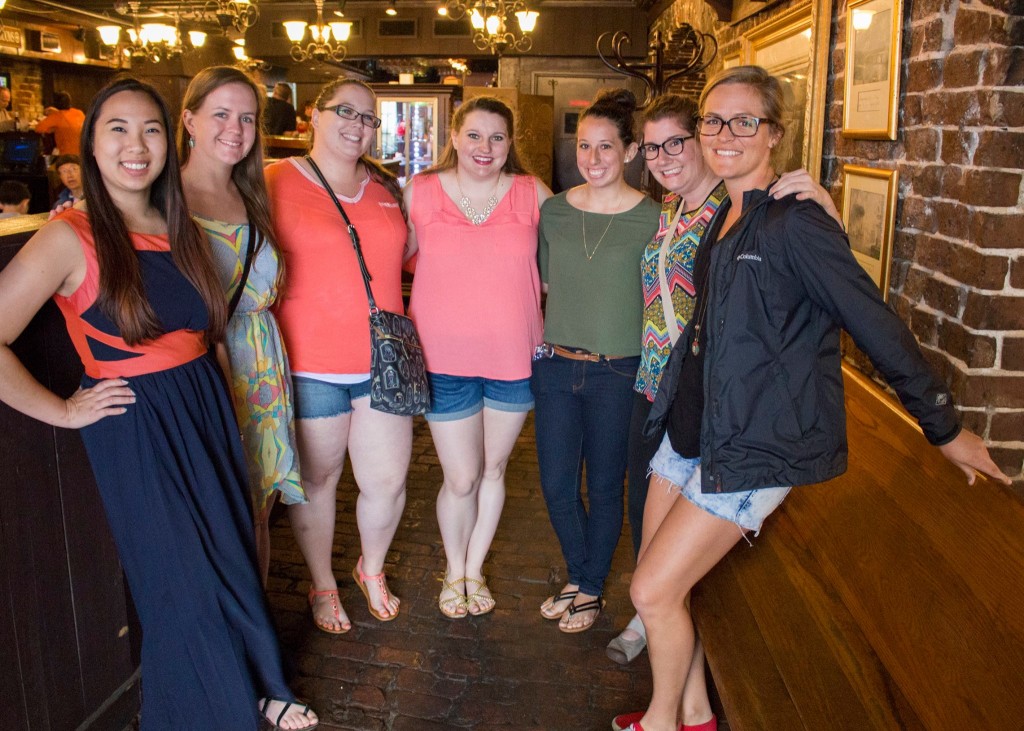 For a late lunch, we chose the River House Savannah restaurant across the street from the river. This area has old cobbled streets that one of our drivers said was laid over 200 years ago. Woah! The South is full of history— and I find it fascinating! For some reason, when I am on the East coast, all I want is seafood. Erica and I split a blue crab stuffed flounder. It was fresh caught flounder stuffed with deviled blue crab, over garlic butter linguine and asparagus– apparently, a Savannah favorite!

After the group was no longer hangry, we moseyed down the walkway past tourist shops, restaurants, and bars. 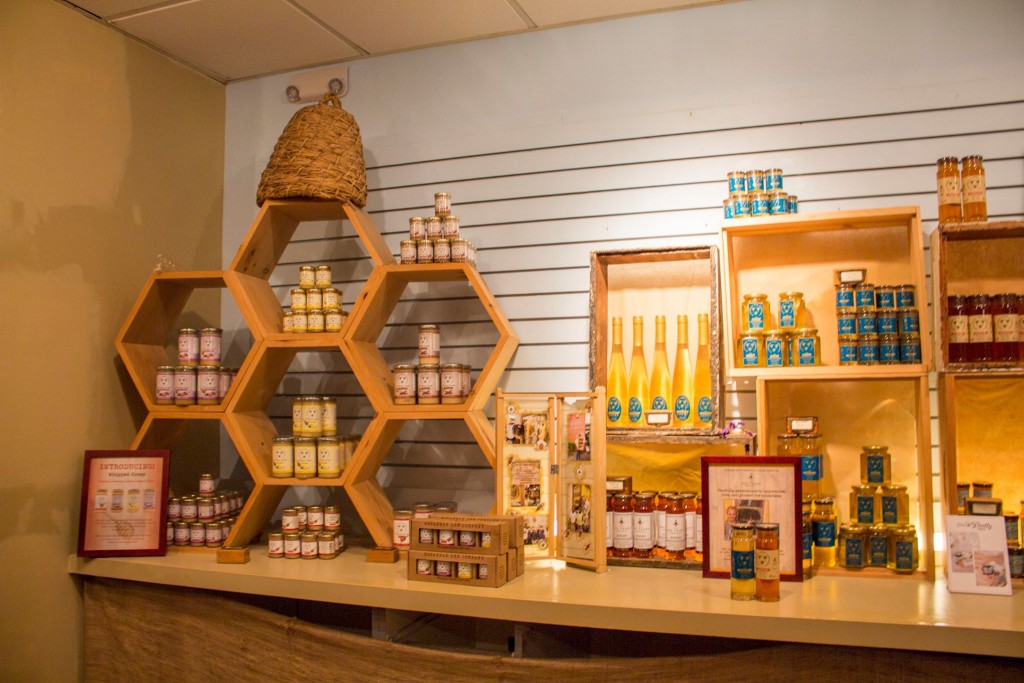 We stopped at the Savannah Bee Company that we stumbled upon, and it was pretty sweet! (Pun intended). They had products made from beeswax, honey, honeycomb, and pretty much anything else bee-related you could think of. 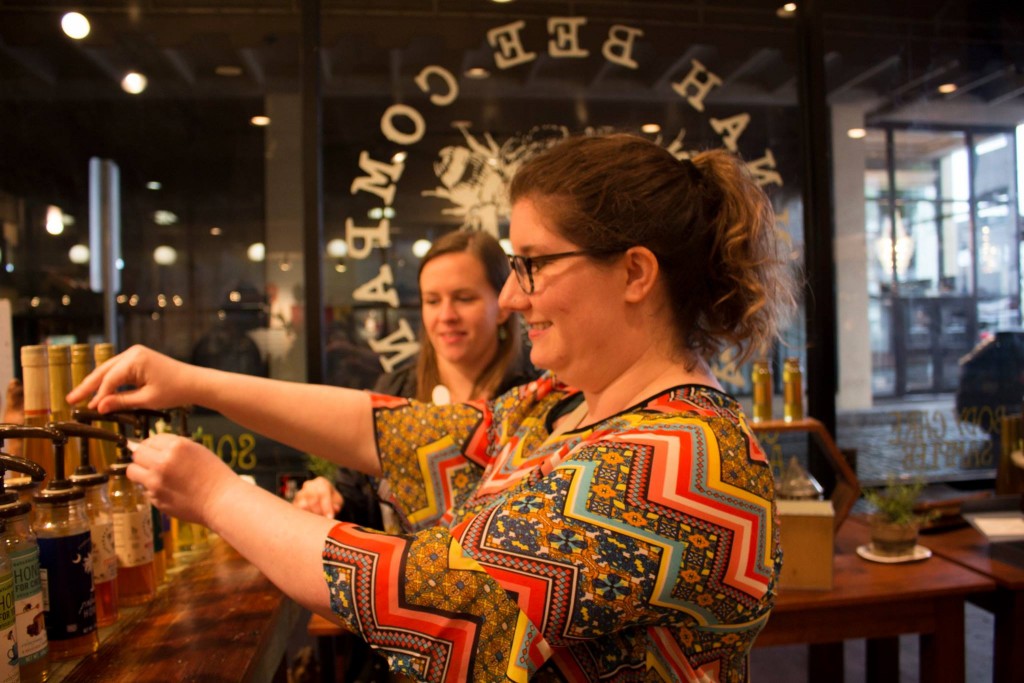 We zeroed in on the mead tasting they had. Mead is honey, yeast, and water. We got to try 5 different meads at the tasting. They taste similar to wines. I liked the tupelo honey mead (the sweetest) and bought a bottle for Brighton and I to enjoy on our honeymoon in the Carolinas. 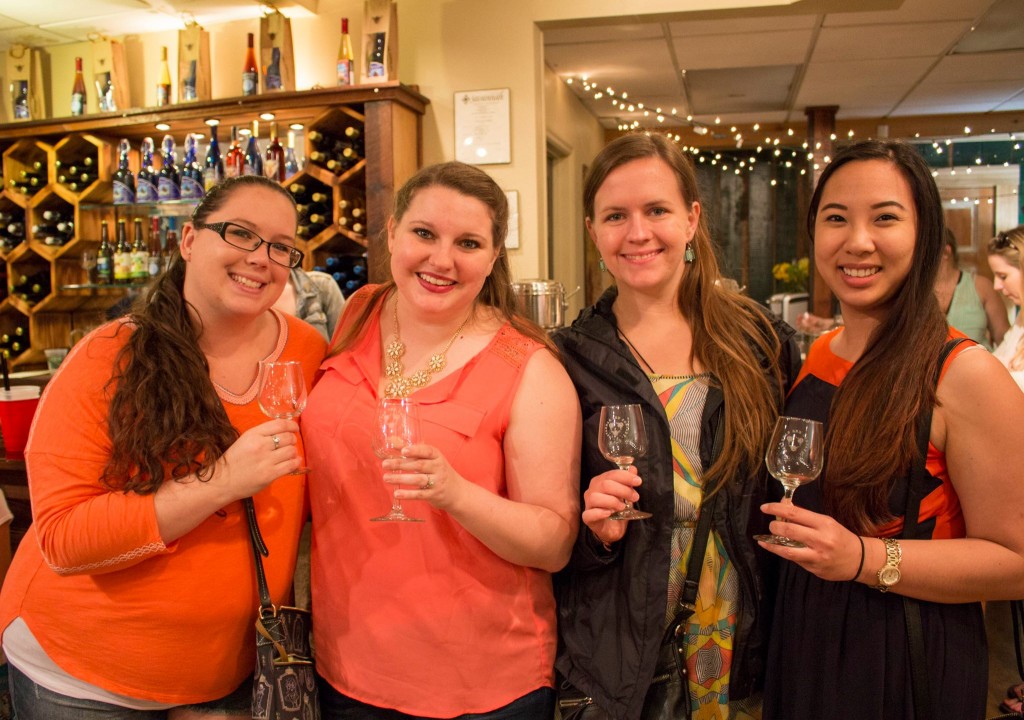 My sister bought some beeswax wrap that seemed pretty brilliant. It’s a plastic wrap alternative to save foods. 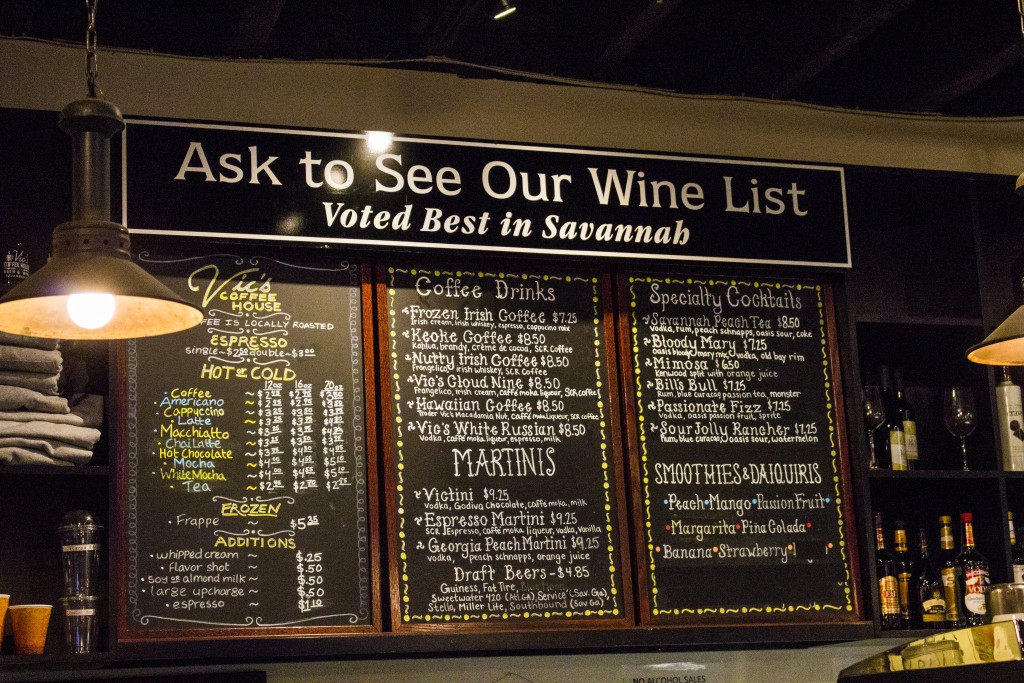 After our bee stop, we wandered into a chocolate store and then over to a coffee shop that served coffee and coffee-based alcohol drinks. Genius! This is something that I would never in a million years find in Salt Lake. The vibe was super chill, and if I lived in Savannah, I could see myself coffee-shopping there. It also would be excellent people watching. 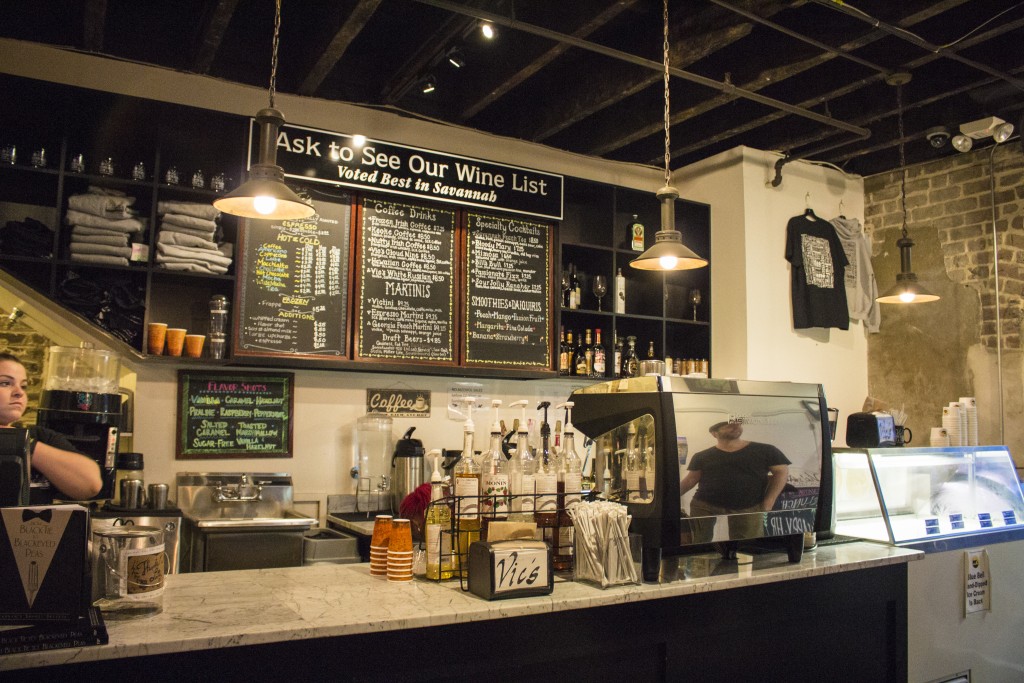 After we felt sufficiently touristy, we Ubered back to the house to get changed and relax a bit until our ghost tour.

Dinnertime with the Bridesmaids! 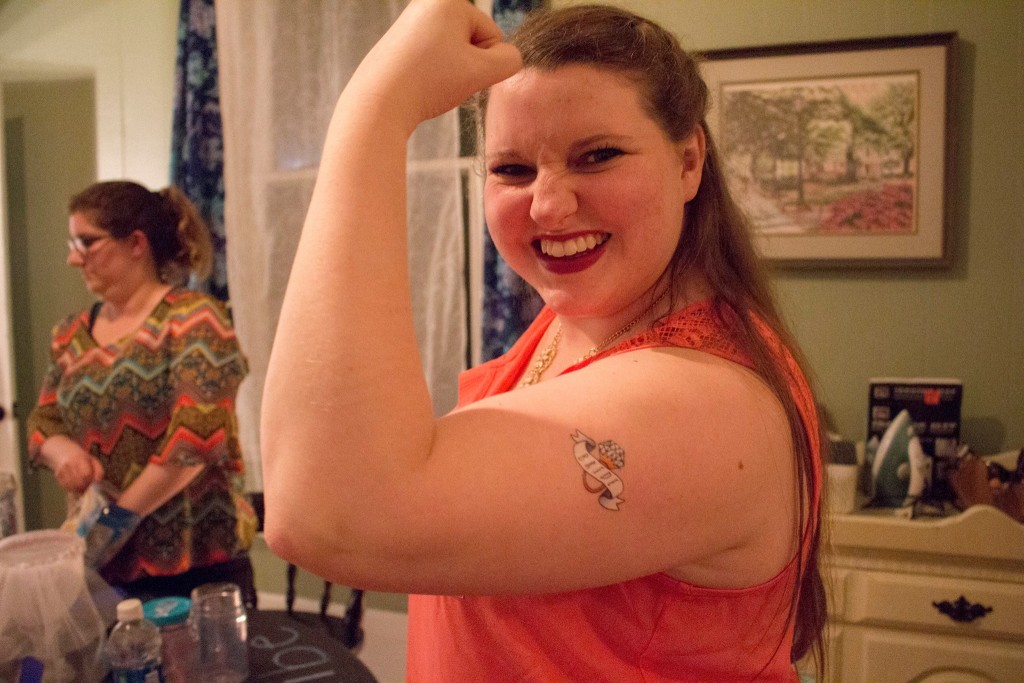 Chefs Demi, Courtney, and Erica (I think) got to work and made us a beautiful taco dinner for us to enjoy! It was a nice private and affordable way to us to share a meal and hang out together. 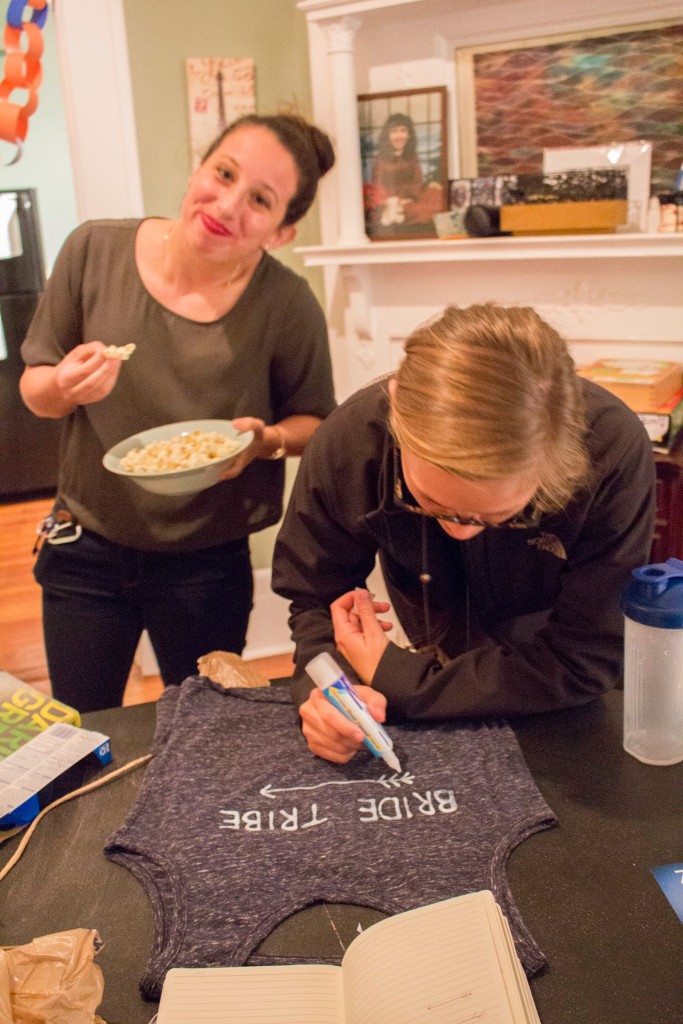 We also hung out and made shirts for the day of the wedding with bleach pens. As you can tell, they would’ve been super cute, but for some reason the bleach didn’t stay. 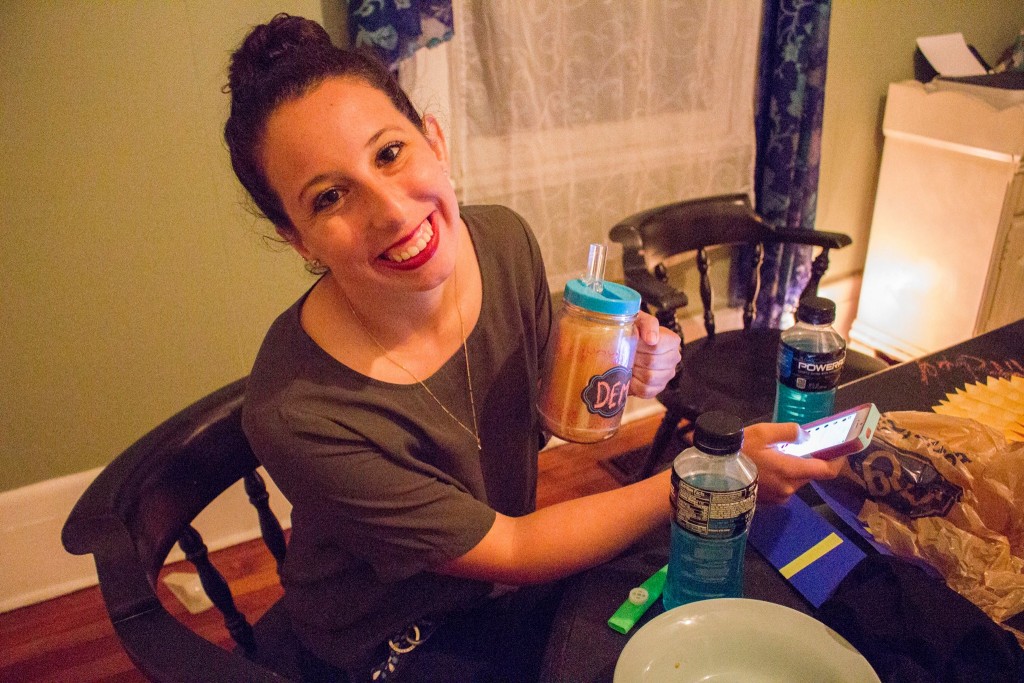 Erica had signed us up for an adult-only ghost tour that evening. I personally love ghost tours because it’s a fun way to explore a new city by foot (usually) and learn about the history. According to our guide, Savannah is the “most haunted city”. I don’t really believe in ghosts, but it’s a unique and entertaining way to hear stories about the area. Our guide was also pretty funny and a great storyteller. I appreciated his addition of photos and videos at each of our stops. 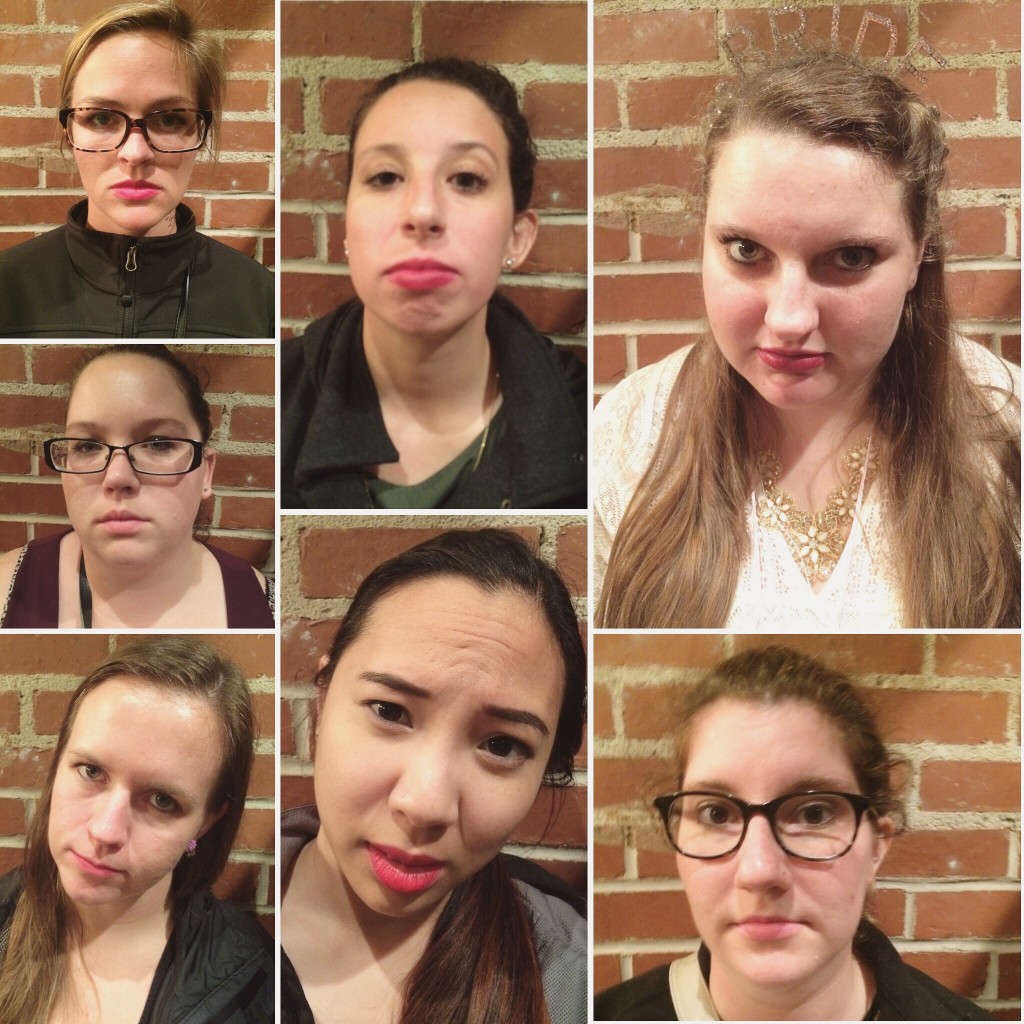 These are our mugshots from the weekend.

Since we had been out the night before, we decided to go crash at the house and take Saturday night easy. Almost all of us were exhausted too.

On Sunday morning, we woke up and got ready to head back to reality or, for me, pre-wedding craziness. We used the leftovers from the night before’s tacos to make breakfast burritos with bacon, eggs, and tortilla wraps. 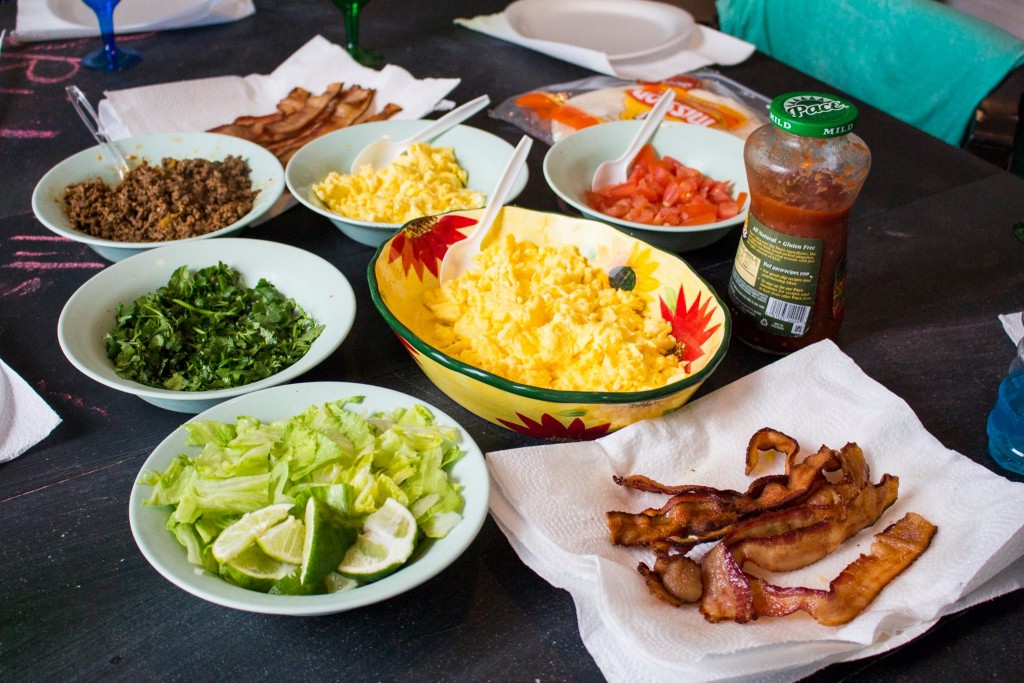 Erica also set up a mimosa bar for us with champagne, orange juice, fruit juice, and fresh berries. She really nailed the weekend planning! 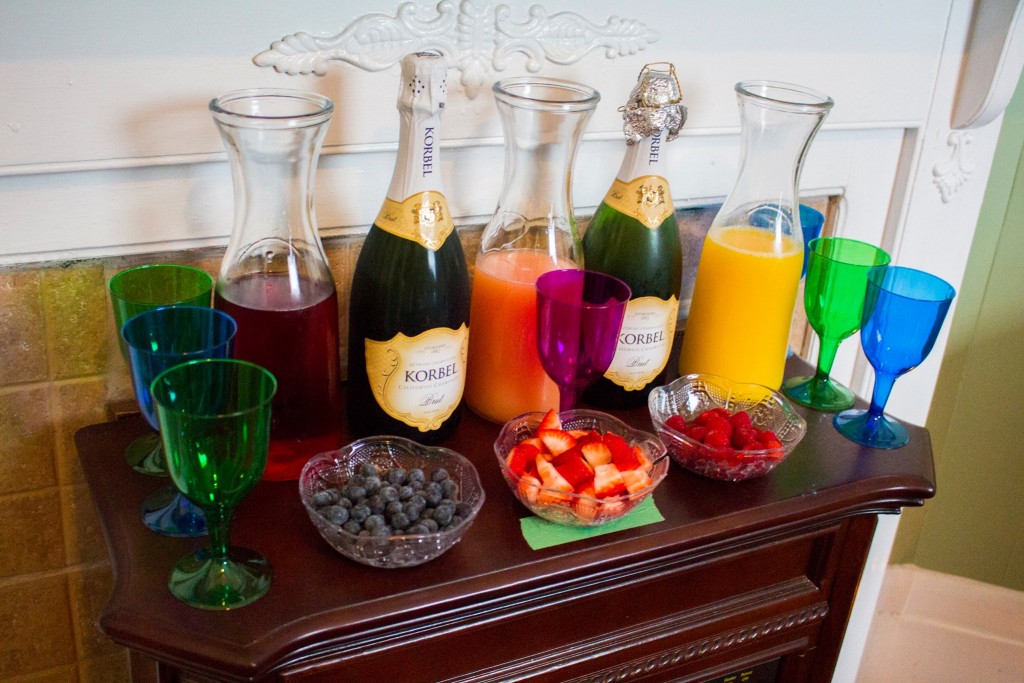 Our last meal at the house. Cheers to a bachelorette weekend success! 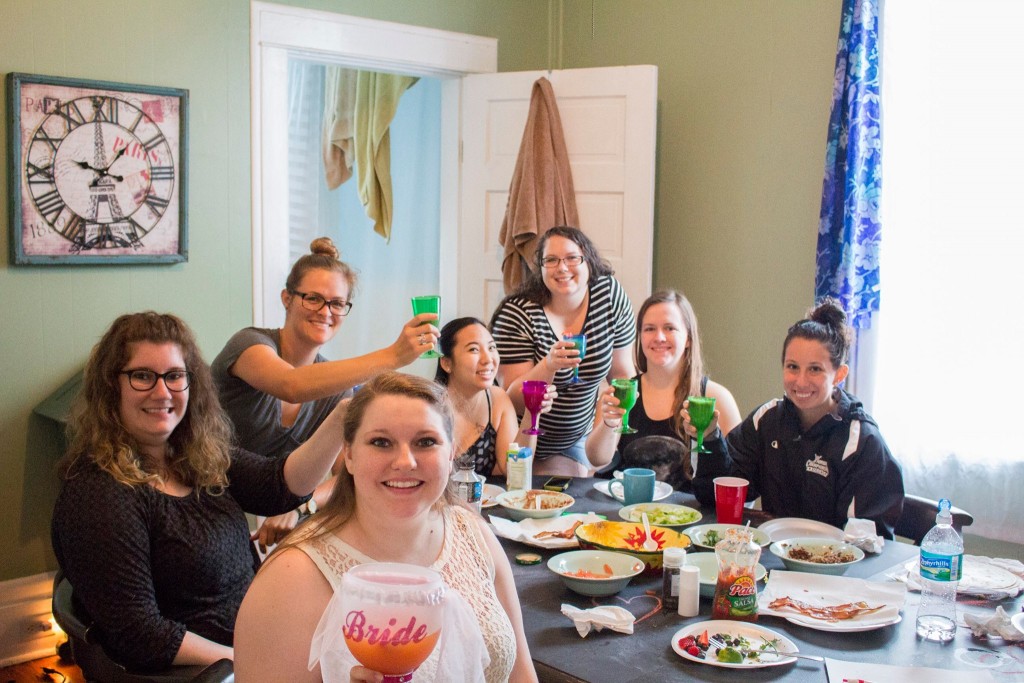 We had to be out of the house by 11:00am since that was the checkout time. In reality we were out a little later than that, but we did our best. I was pretty insistent on going to the famous Forsyth Park in the downtown area. The weather had been off and on raining (the forecast was thunderstorms all weekend, so in that regard we were lucky). When I Googled photos of Savannah, I saw this park and I wanted photos of it, so I am glad we went! It was a great way to end our weekend. 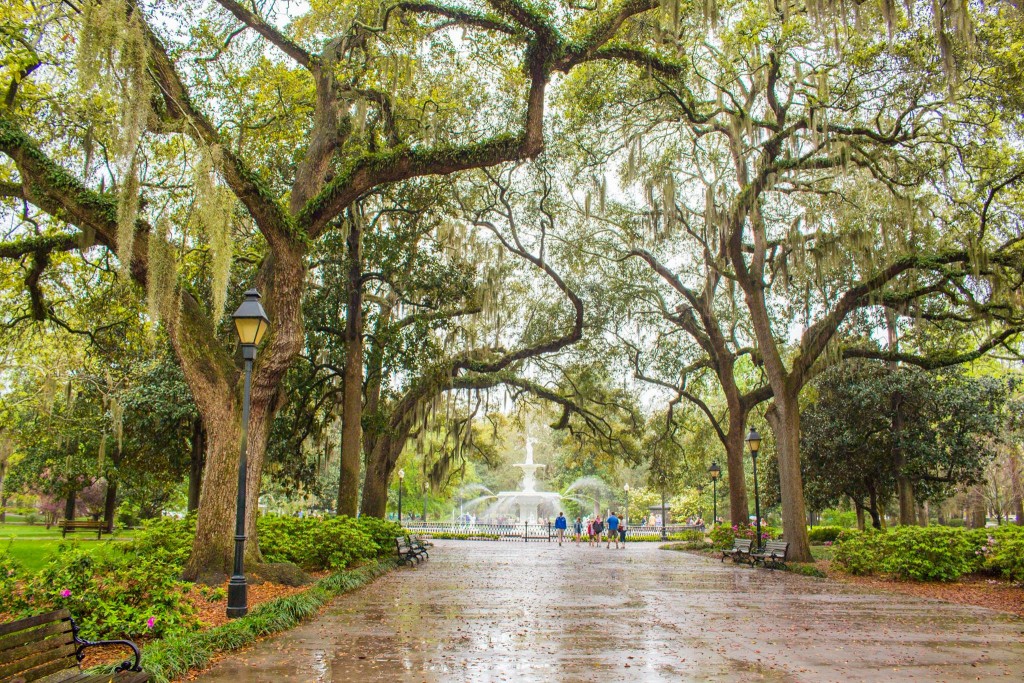 We went our separate ways after that, with the Orlando girls going in one car, and the rest of us driving to Gainesville to drop Demi off and continue on to St. Pete. 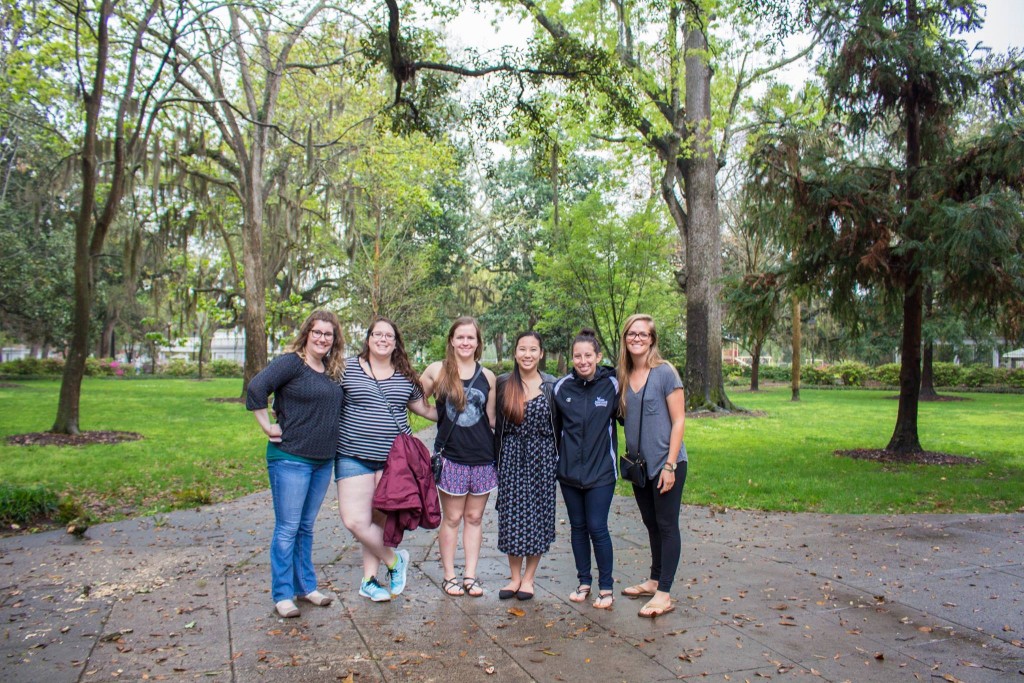 The weekend was a perfect weekend escape from the wedding planning craziness, and an awesome way for me to get to spend some time with my bridesmaids before the wedding itself.