If you’re looking for a low-key adventure (read: lazy) on a spring afternoon (like we were), I’ve got the perfect adventure for you. Devil’s Kitchen is a rock formation that’s been named a Mini Bryce Canyon, and it’s only 1.5 hours from Salt Lake City (instead of the 4.5 that Bryce Canyon is from SLC!). 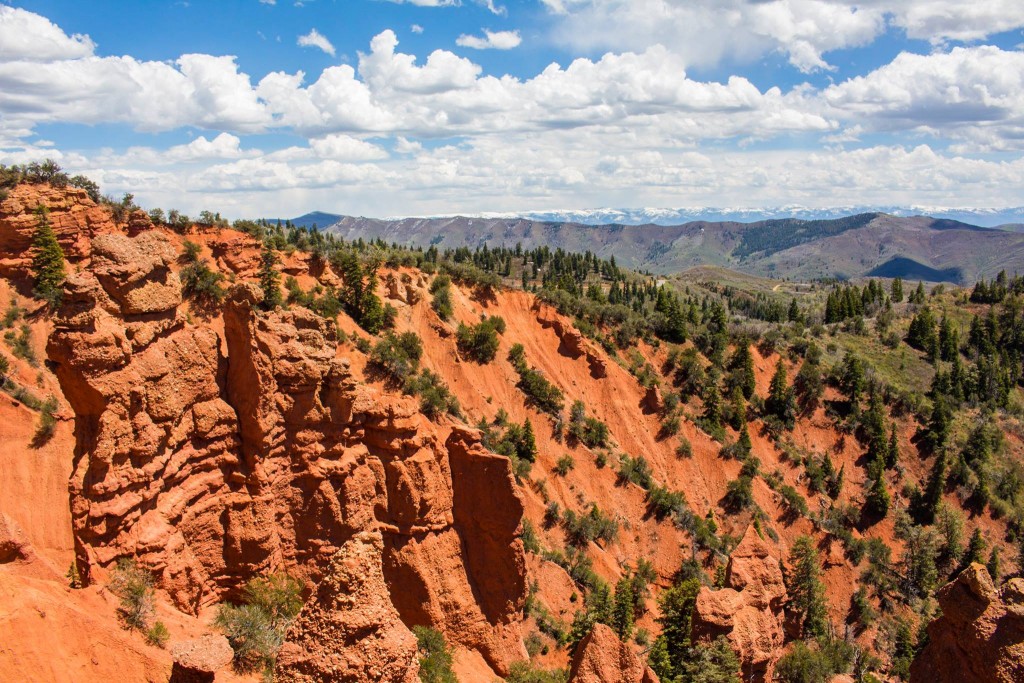 This isn’t much of a “hike” or even a “walk.” This is a view, and a low-key driving adventure. If you want to hike, there are trails along Nebo Scenic Loop for those of you looking for more activity in your adventure.

To access the south end – from I-15 at Nephi, take Exit 225 to travel east on State Route 132. Five miles from the Interstate, look for a left turn (north) onto Forest Road 015, which is the scenic byway. Travel north on the byway, following the signs at junctions. The byway ends just outside Payson, from which you can access I-15 again.

*The road was closed at Devil’s Kitchen from the South, so we took the South End in and out. For road closure information, call 801-798-3571*

To access the byway from the north – from Interstate 15 take Exit 248 in Payson, heading east on 800 South. Turn right onto 600 East, which becomes the Nebo Loop Road (FR 015) into the mountains. 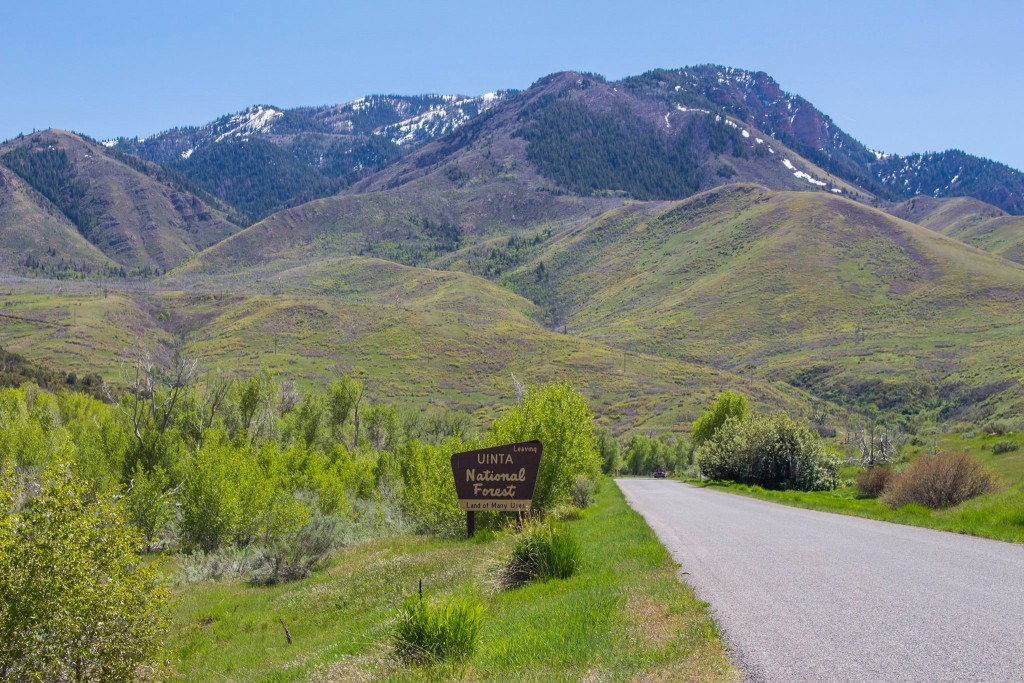 How was Devil’s Kitchen formed?

Before the Wasatch Mountains were formed over 80 million years ago, streams were eroding another range in the area and depositing the sand and rock here. These deposits were cemented and created the Conglomerate. The oxidation of the iron causes the deep red rock color in the rock. 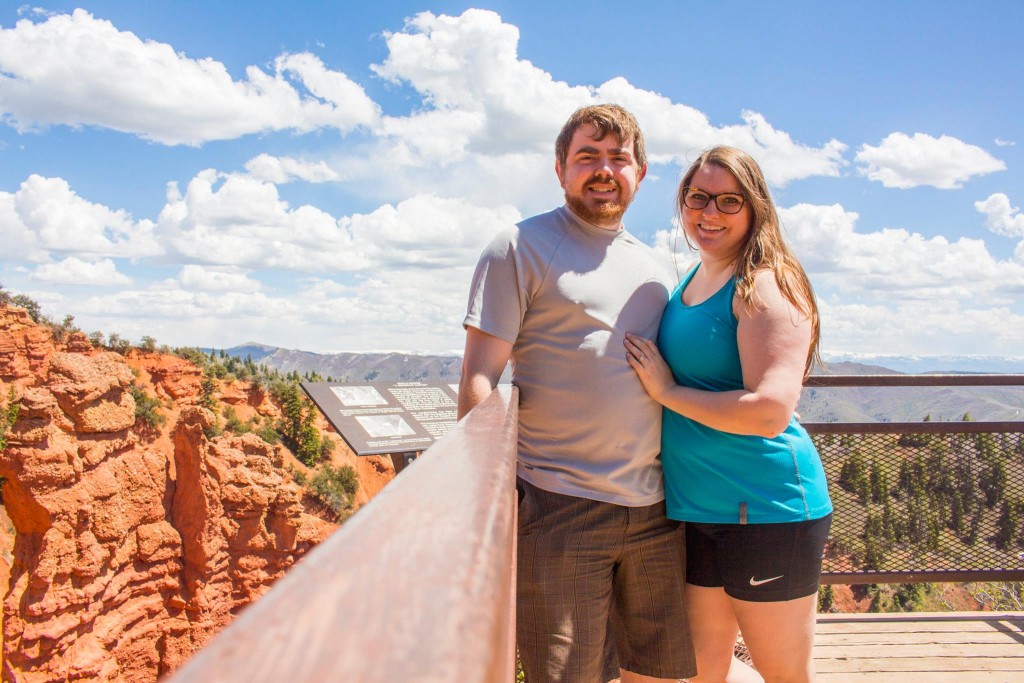 The rocks in the spires are from the Price River Formation, according to geologists. The fault movement of the Wasatch Mountains has raised the range to its current heights. There are many forces of erosion including wind and water in this area combined with the weak cementing material, which has caused the formation of the hoodoos in this “Mini Bryce Canyon.”

This is a photo of Bryce Canyon for reference. 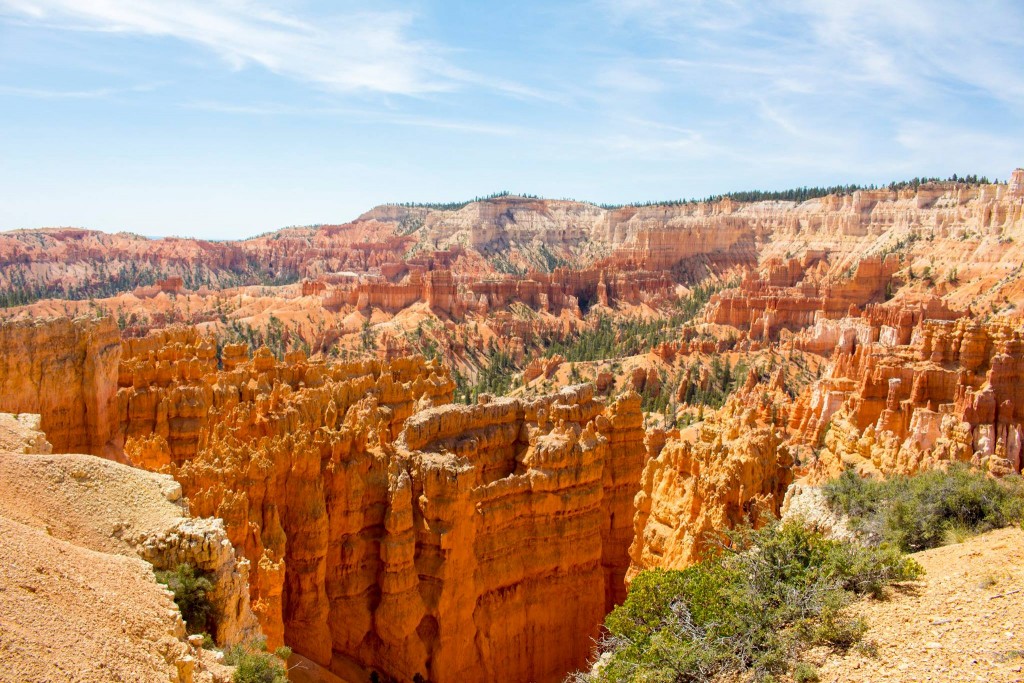 I couldn’t find why it’s called “Devil’s Kitchen” but my speculation is that it’s a reference to nature “cooking” up these formations and the color of the rocks. If you know, I’d love to hear some insight! 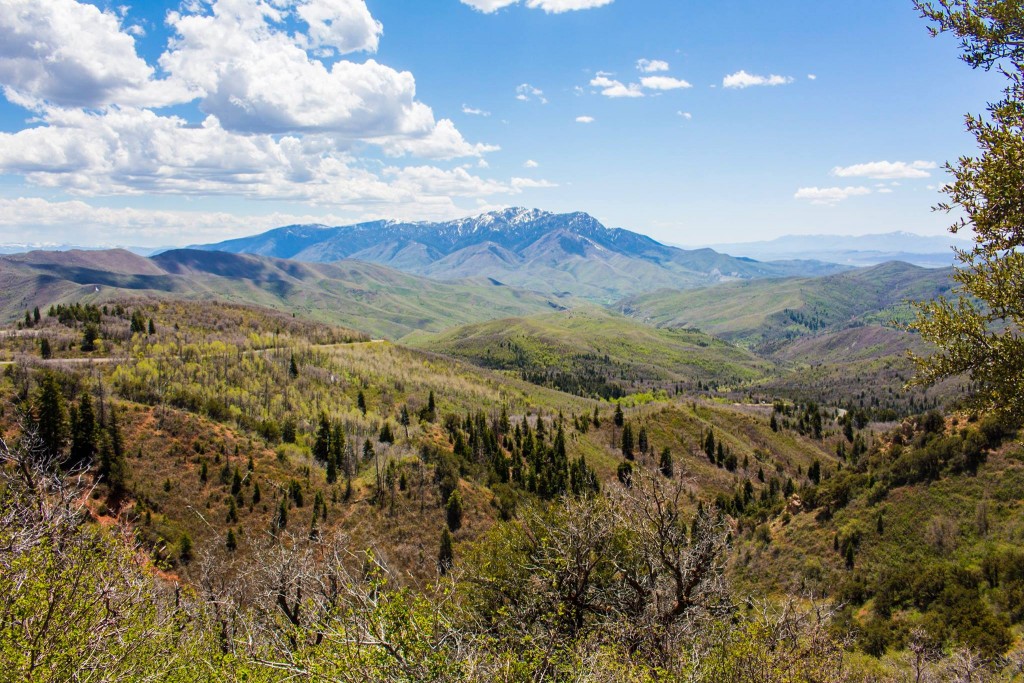 The parking lot for Devil’s Kitchen is clearly marked off of the Nebo Loop (FR-015). There are bathrooms and a picnic bench at the trailhead as well. The path is paved, and wide enough for wheelchairs and strollers to make it a perfect stop of a family-friendly adventure. 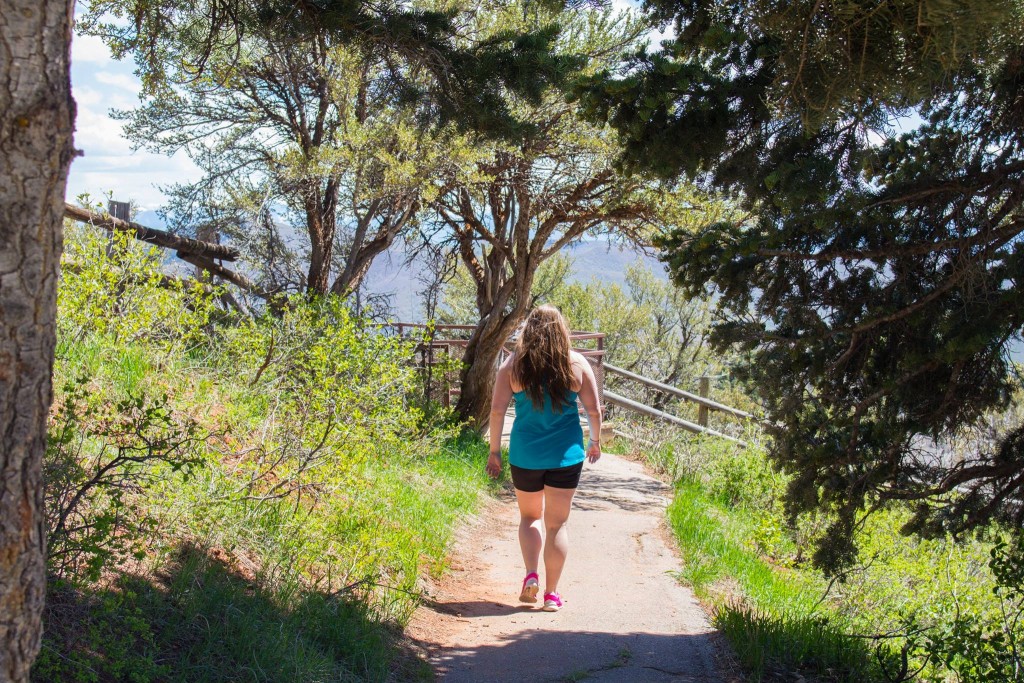 The path to the viewpoint is about 1/4 of a mile, one-way, with no elevation gain. As you walk along the partly shaded forest path, you are treated to some pretty awesome views of Mt. Nebo. 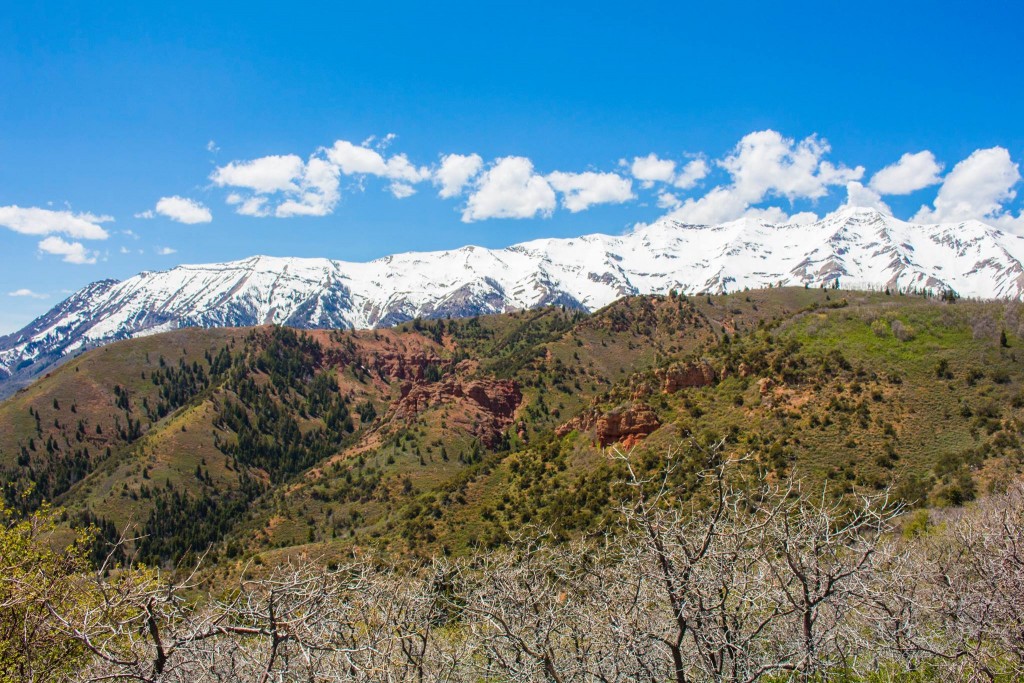 Once we arrived at the overlook, I was shocked to find the red rock hoodoo formations anywhere but Southern Utah! It’s a hidden gem along the scenic byway. It was an interesting combination of the plateaus and soil from Southern Utah, but the alpine climate of Northern Utah. 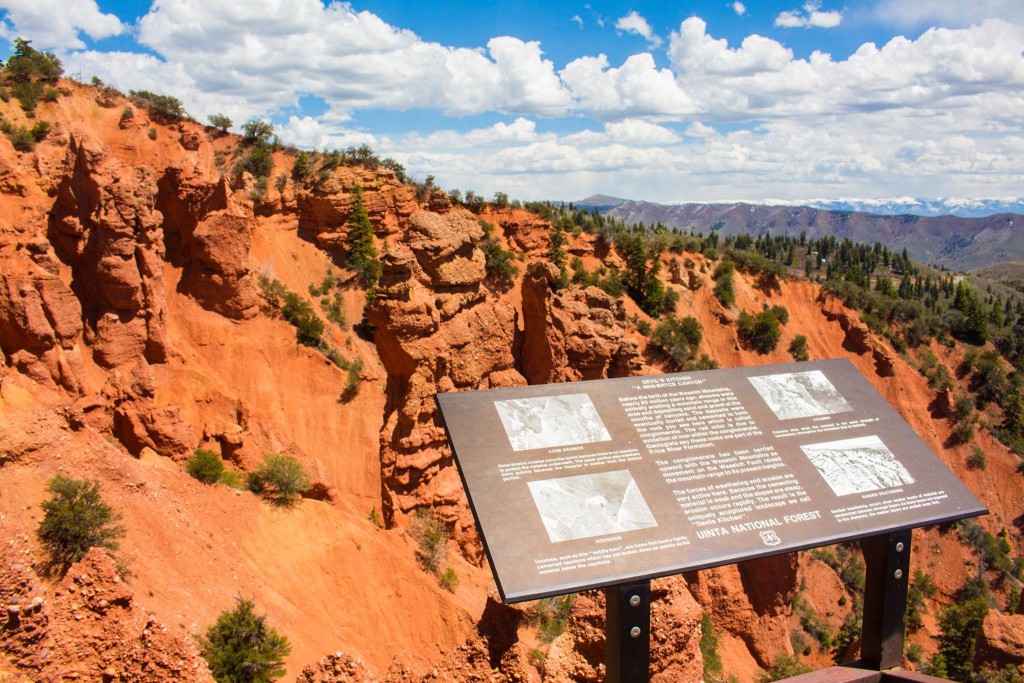 There is a fenced platform with some information at the end of this short trail. It’s about 6-7 feet wide. 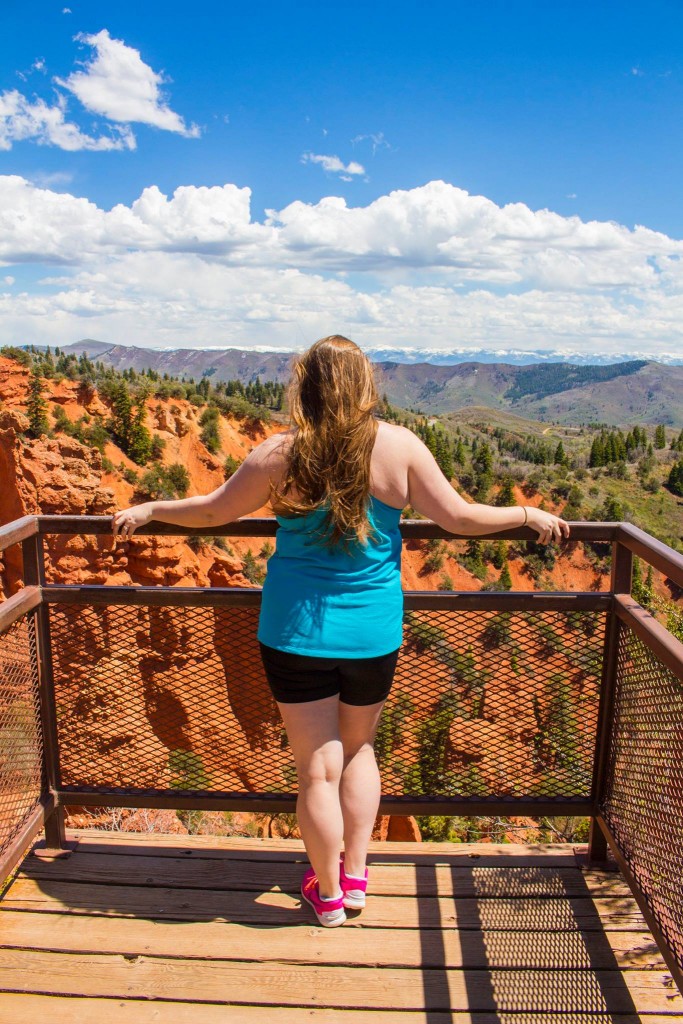 Have you ever driven Nebo Scenic Loop? Where are your favorite spots? Do you know of any other hidden gems in Utah?