For our New Year’s celebration, my sister Katie, Brighton, and I drove up from the parents’ house in St. Pete to Nashville. Katie’s best friend, Ashley and her husband, Justin live there. I’ve been to Nashville twice— once for New Years in 2012, and once for Ashley & Justin’s wedding. I have a mission to show Brighton the Southeastern US, and this was a perfect opportunity for a quick trip up to Music City.

Our trip was a total of five days, two driving, and three in the city.

To start our day, we went to a local hip coffee shop, Crema based on a recommendation from Ashley and Justin. The place was packed! The decor reminded me of Publik in SLC— industrial vibe, minimalist metal seats, and exposed wood. Their latte art was excellent, and the coffee was yummy. I could see myself spending some time there working at a less busy time of day. 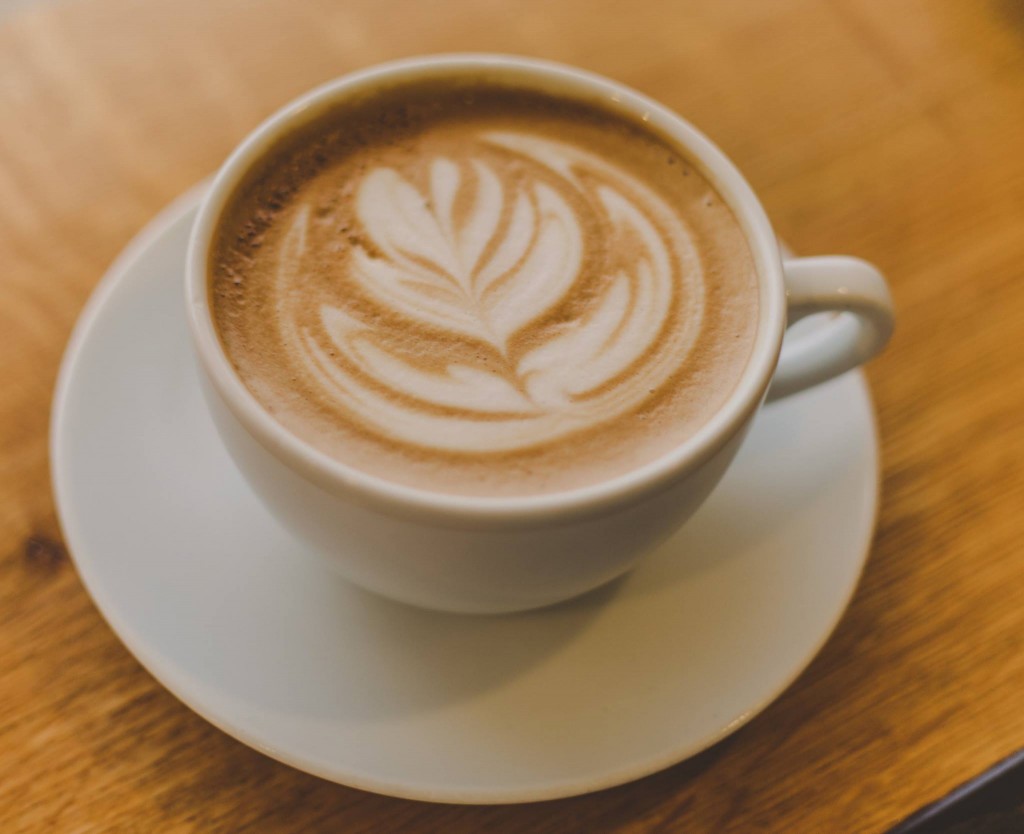 After getting our coffee fix, we ventured over to the East Nashville area, 5 Points. Brighton and I guessed that it gets its name from the 5 roads meeting in an awkward way. (Nashville could work on their grid system.;) The area is most popular for its young, hip nightlife and restaurants. I wanted to check out Treehouse, based on a friend’s recommendation, but unfortunately it wasn’t open when we were around. 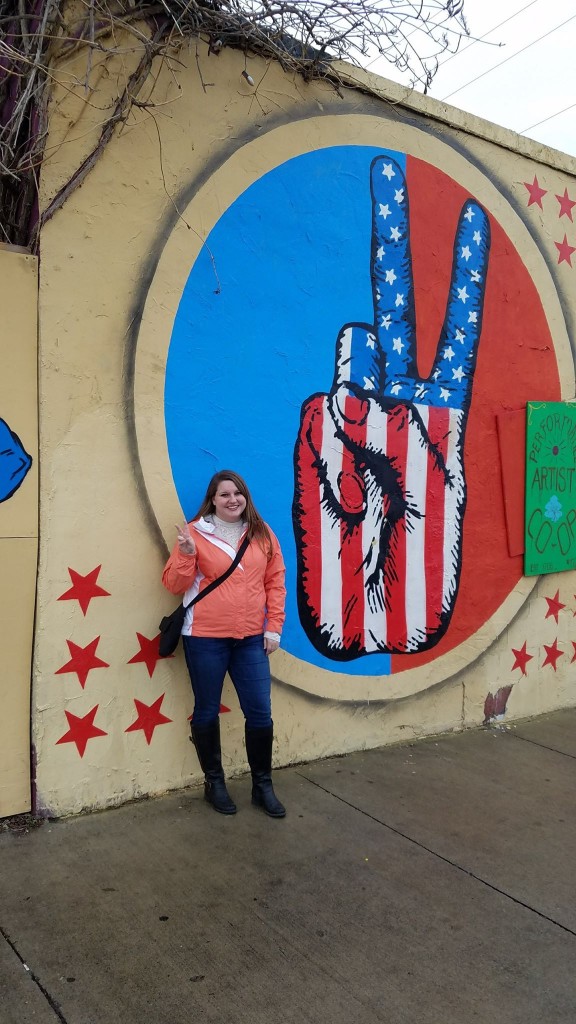 We were hungry for lunch, and the weather was rainy so we ducked into Tenn Sixteen, “Southern Food with a cajun accent” restaurant and bar. Brighton ordered the pork chop sandwich, which was, in true Southern fashion, breaded and fried. He said it was delicious, but extremely rich in flavor. I had the meatloaf, which was less rich, and had a ton of flavor throughout. Unfortunately, I was too hungry to take photos of my delicious dish before diving in.

For New Year’s Eve, Ashley and Justin had a few friends come over and spent the evening away from the crazy crowds. Happy 2017! 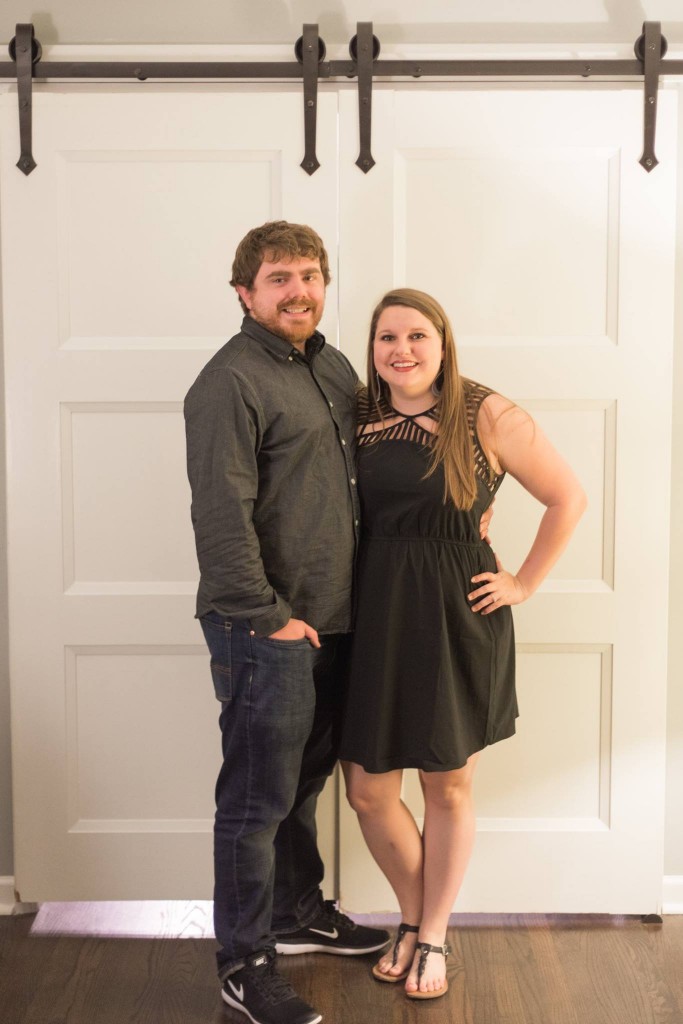 I Believe in Nashville Mural

The next day, we went to the 12South area, near downtown Nashville. This area had a cool, young vibe to it. There’s a strip of popular restaurants, boutiques, and coffee shops to explore. It was also super busy. 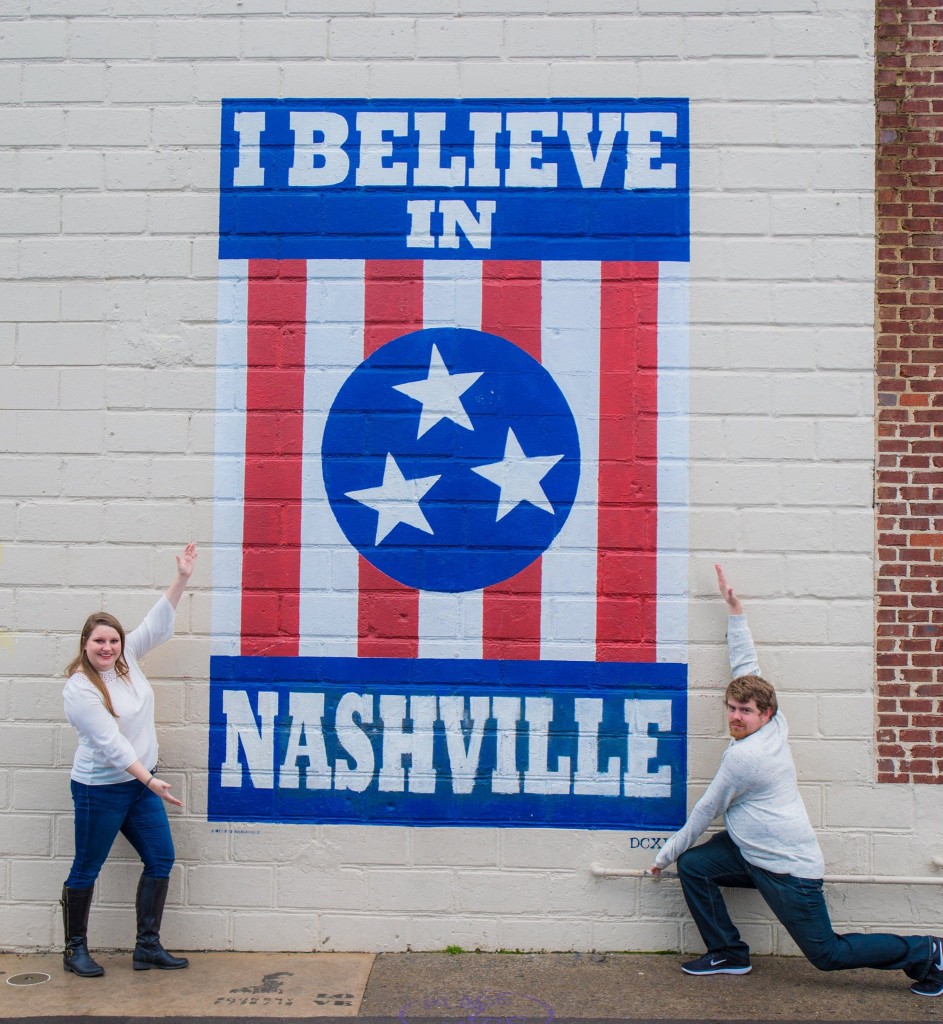 One of my friends I met in SLC is from Nashville, and I knew that there were some fun murals to take photos with and one of them is the I Believe in Nashville mural. It’s right next to Reese Witherspoon’s store, Draper James. We actually had to wait a few minutes to get our turn to take photos with it. 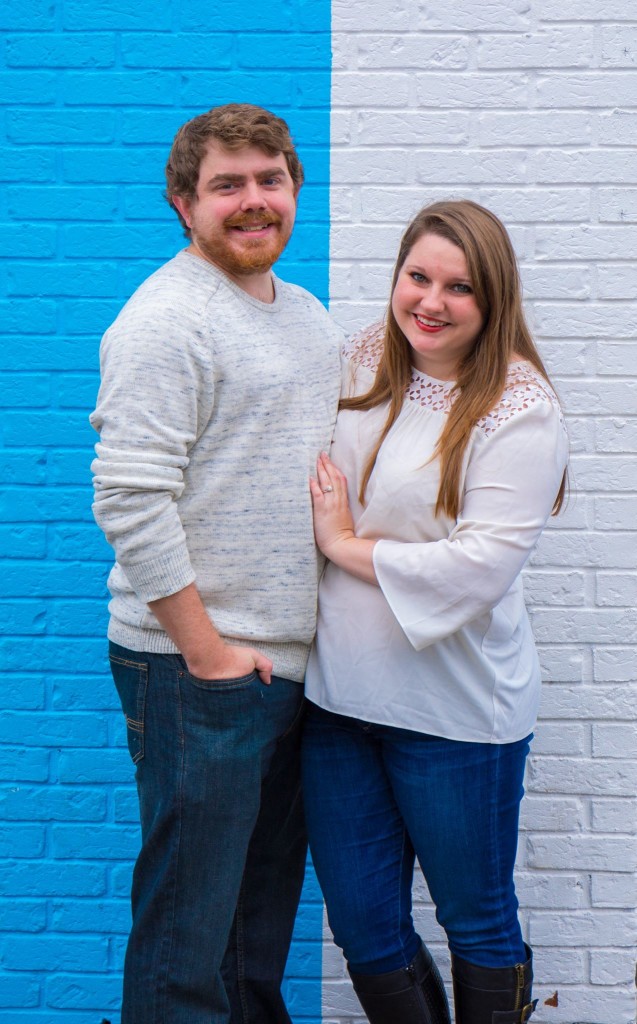 Since we were waiting for our table to ready at the restaurant, we wandered over to Frothy Monkey for some coffee. Isn’t that name great?! I got a Honey latte of some sort, and it was delicious. I’m starting to see a trend. Remember the Bee Loved Latte in San Diego? Yummm. 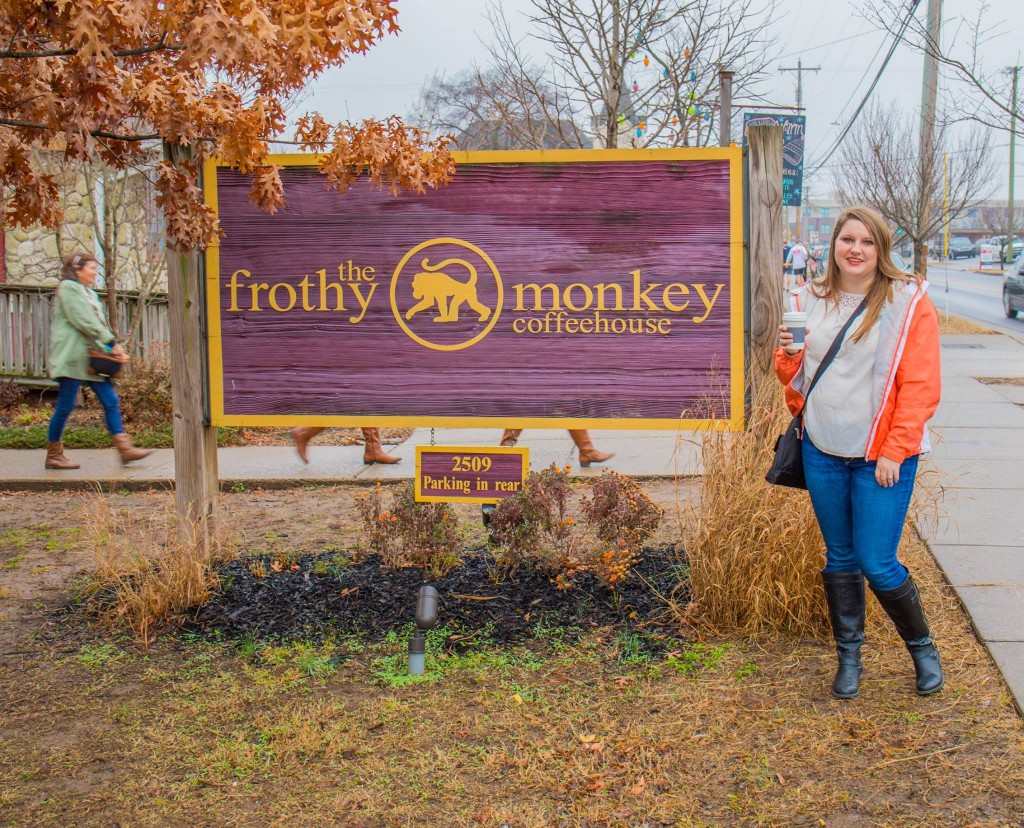 About 30 minutes after we put our names in for a table, we got called back. Bartaco is one of Justin & Ashley’s favorite new restaurants. They are popular for their street tacos and hand crafted cocktails, served community style in a nautical themed restaurant. Everything they served had a little bit of a unique twist. Their chips were large 6 inch hard tortillas which were perfectly salted and crunchy. I’m not usually a fan of guacamole, but in certain circumstances when it’s super fresh and homemade I’ll have some with my chips. This was one of those special circumstances. So fresh! All of their tacos were tasty, but the experience as a whole was a little high priced for what it was. Oh well, that’s what vacations are for! 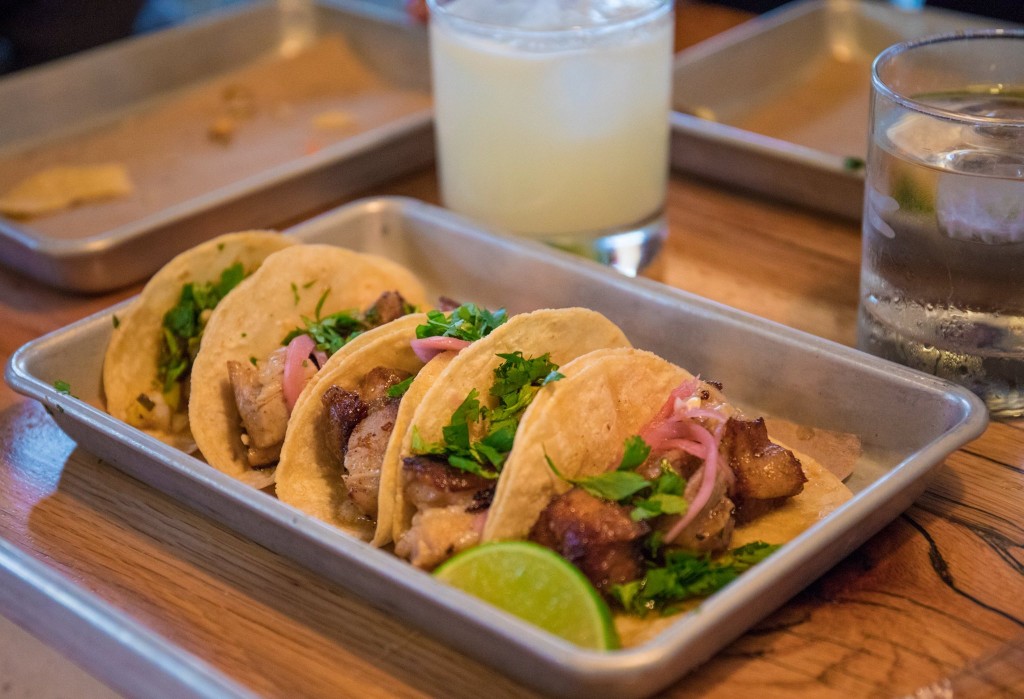 As many of my close friends know from my choice in wedding cake, I love cupcakes! After lunch, we hopped over to Sprinkles Cupcakes where there’s a cupcake ATM outside the shop. HOW COOL IS THAT?! They come in a cute little box and you pay with credit card, and then they come out of the magic box. Fun fact: When I picked up our cupcakes out of the opening, I had grabbed them awkwardly so I wanted to adjust my hands so I put them back in the opening for a moment to readjust… and the window started closing! Typical Hilary. Oops… 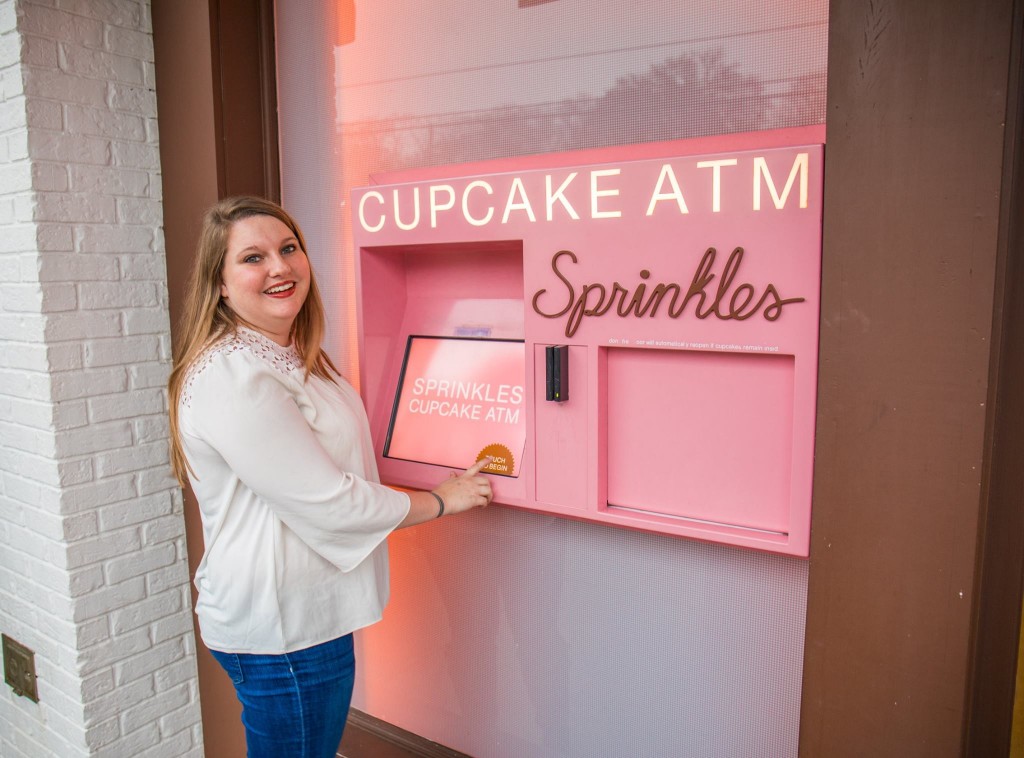 On our way back to Ashley & Justin’s house, we stopped at the Donelson Mural, in the neighborhood that they live in. I loved how many cool murals there are in Nashville! Long live #hipdonelson! 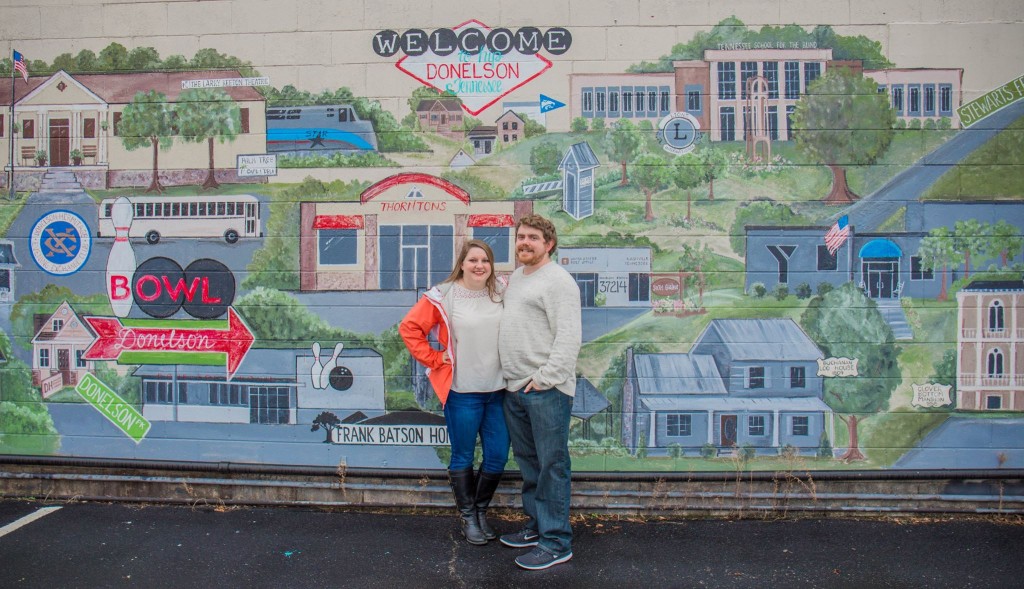 After spending an afternoon relaxing, we went out for dinner at one of my favorite chains (that isn’t in Utah), Chuy’s. They came to Gainesville during my college days, and I was quickly in love. They have a sauce, creamy jalapeño, with the best chips. I also love their enchiladas. It’s not exclusive to Nashville, but it was a quick and easy choice. So good.

On our last day in Nashville, we tried to hit a bunch of spots we hadn’t gotten to yet because of the rain and holiday.

Justin loves pho, as do Brighton and myself, so we ventured to West Nashville for some authentic pho at VN Pho & Deli. There was even a short wait for a table because it was so popular. It was this little restaurant in a strip mall tucked away from the road. They only took cash, but that didn’t seem to hinder their popularity. The broth was the perfect balance of the spices. Personally, I prefer a different cut of meat than what they offered but everything was super good and after a few cold, rainy days it hit the spot. 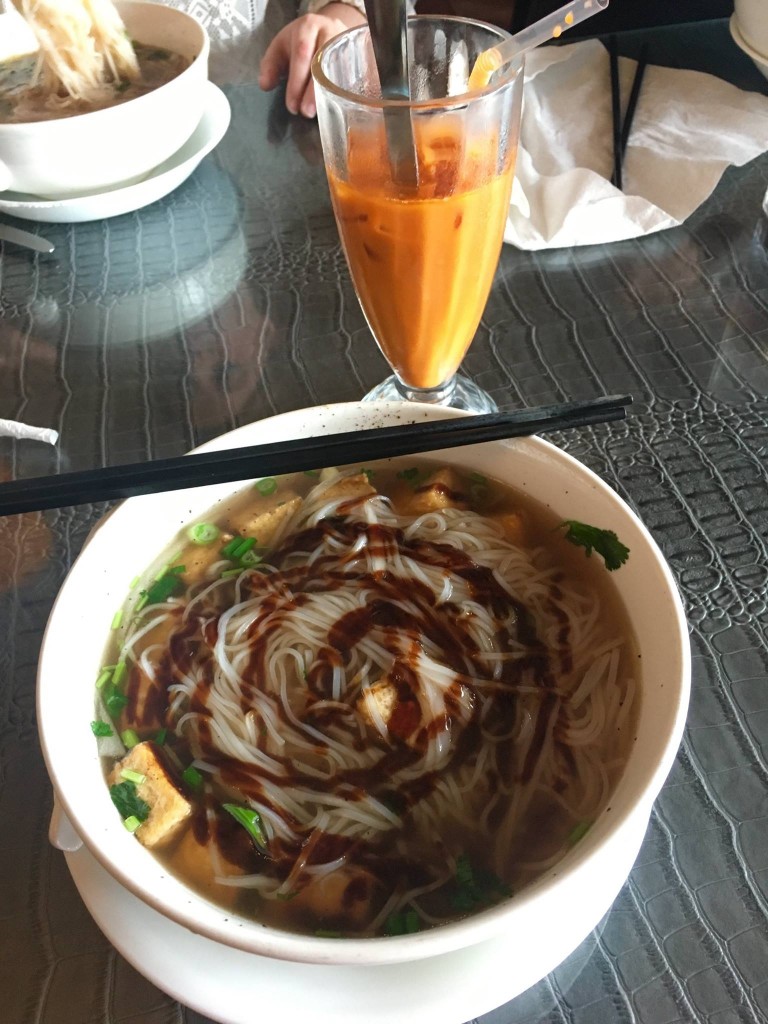 When my dad knew we were going up to Nashville, he sent my sister and I on a mission to find the Antique Archeology store for a t-shirt for him. The store itself was neat, with lots of random antiques for sales with their mini stories attached. It seemed very classic Nashville. 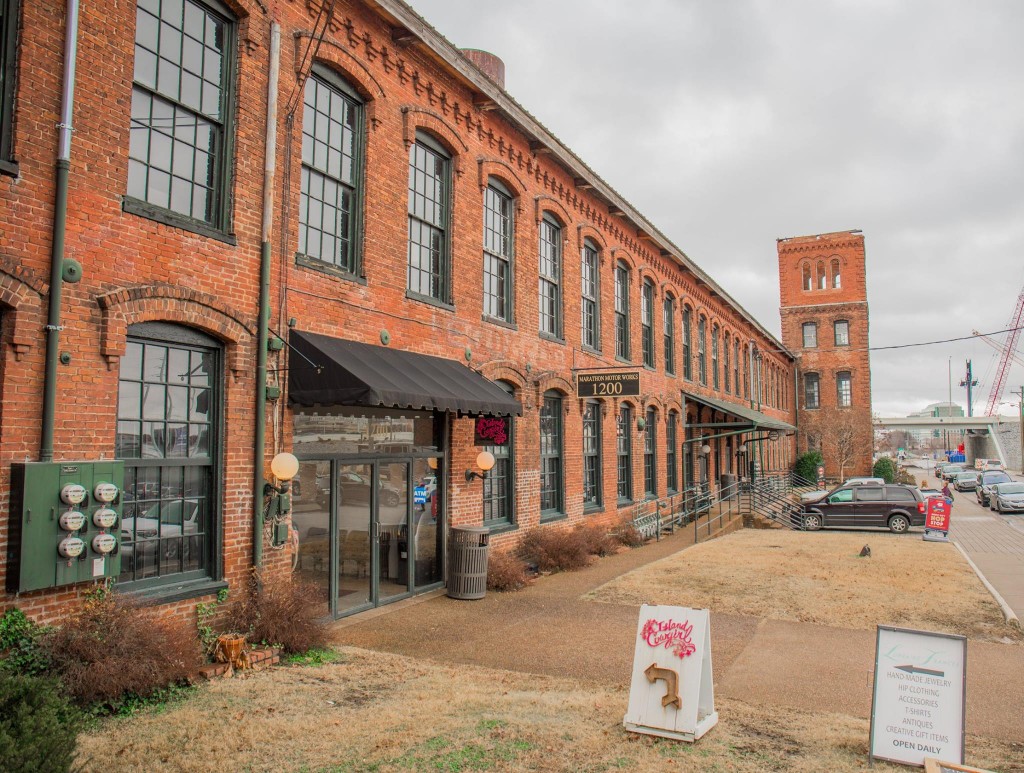 The best part of this stop was actually the building that the store was in. It was the old Marathon Motors factory. The building had its original hard wood flooring preserved, with many remnants of the original factory around. They also had photos showing it in its glory days. I love seeing old buildings and the history they preserve. And it was great how they preserved it by repurposing it as an indoor shopping plaza.

What Lifts You Mural in the Gulch

What Lifts You Mural
302 11th Ave S, Nashville, Tennessee in The Gulc

After our t-shirt mission was complete, we headed over to the Gulch, which is an area with lots of higher end restaurants, shops, and hotels to find the What Lifts You mural by Kelsey Montague. We all took turns taking photos with the wings and moved on. We attempted to go to the Yazoo brewery in this area, but it was closed during the time we went. 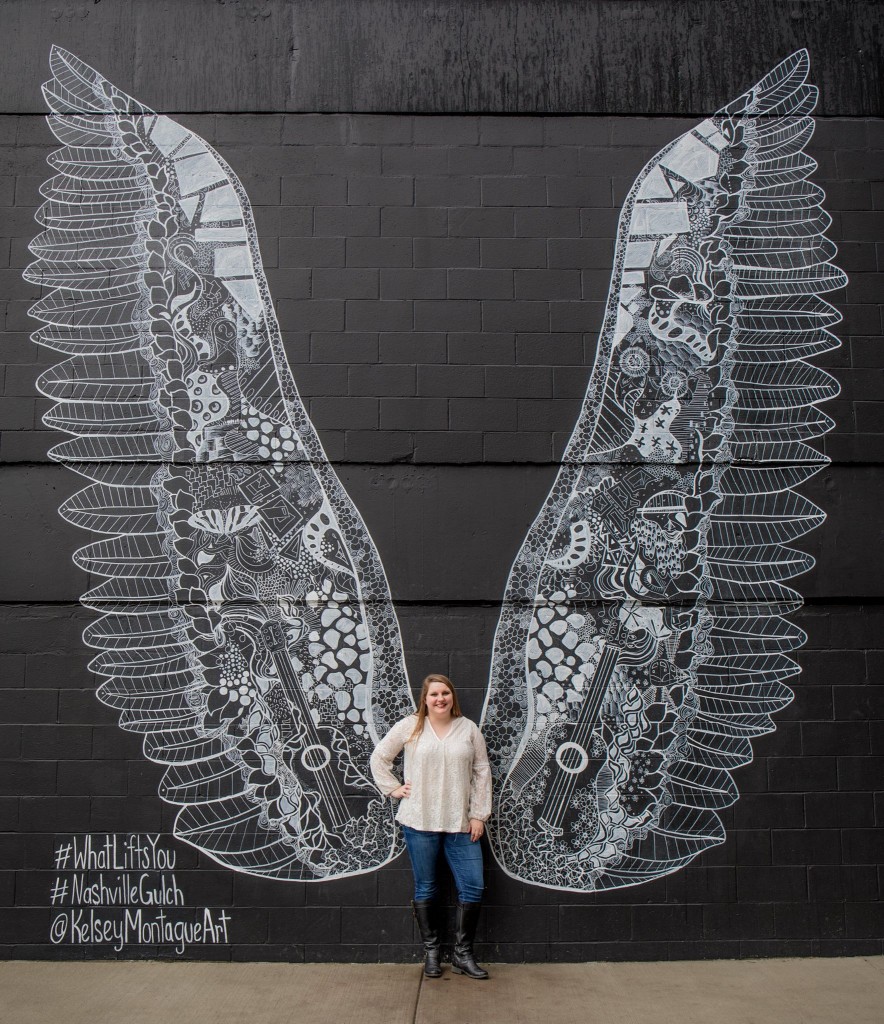 When I was searching for stuff to see and do in Nashville, I found this strange little alleyway that had strange symbols all over a white wall. I learned it was attached to Three Brothers Coffee in Midtown Nashville, near the Centennial Park and Vanderbilt. I am always down for an afternoon pick-me-up coffee, and we got some coffee and took photos with this odd back alley. 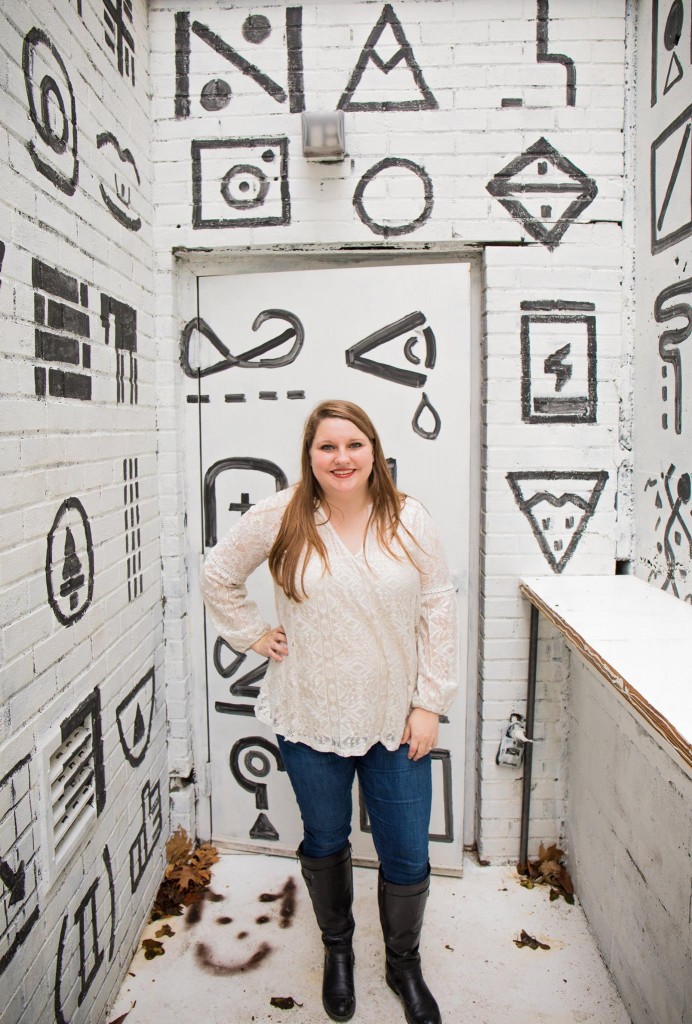 Ashley and Justin took us on a short walking tour of downtown Nashville after our coffee stop. We stopped at several spots. 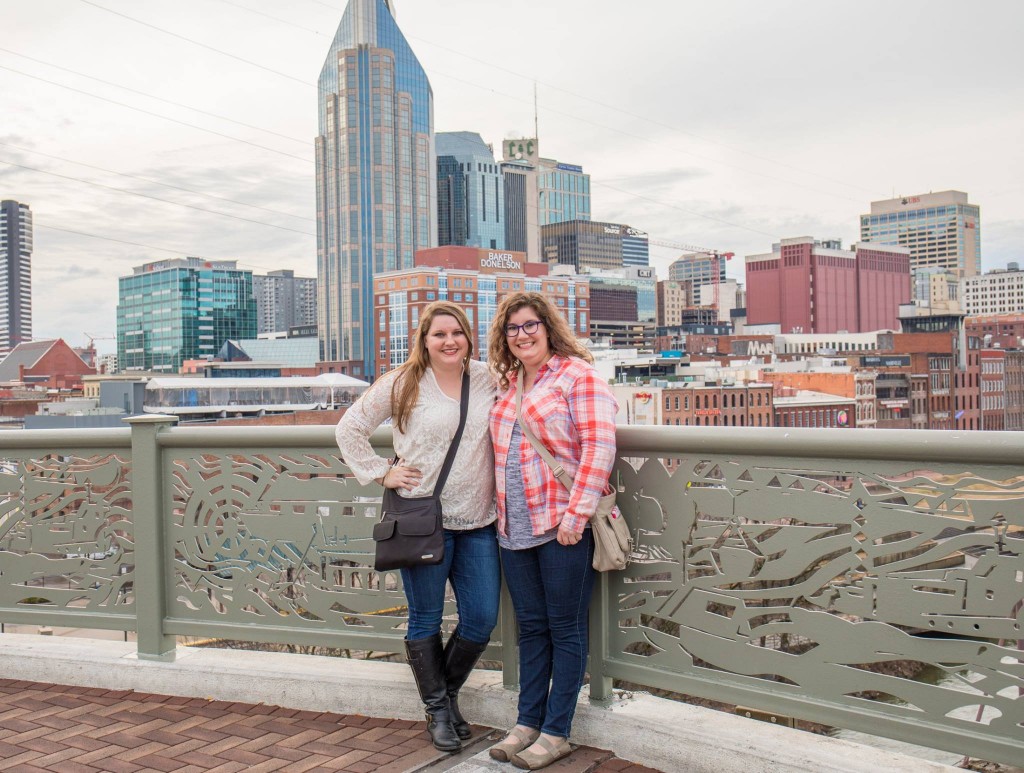 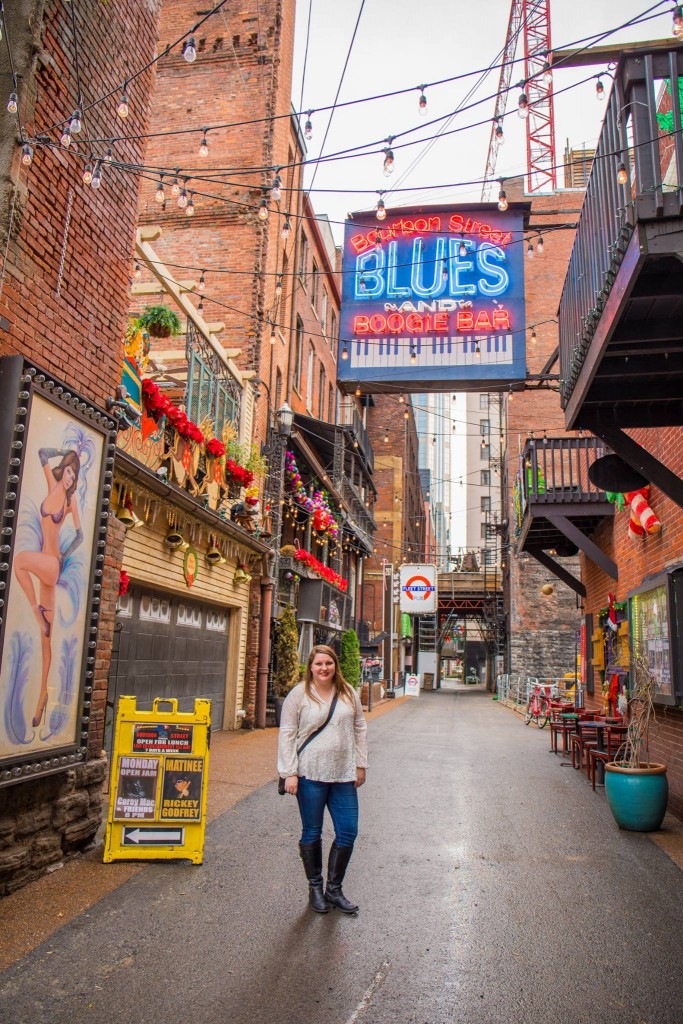 For our last meal in Nashville, I heard that we needed to get “hot chicken” which is exactly what it sounds like— spicy, fried chicken. Since it was early for dinnertime, I figured we should give a very popular tourist (and local) spot, Hattie B’s a shot at the very least. I read online there’s usually a 30+ wait, but we caught the line a good time and only waited about 10 minutes to order. 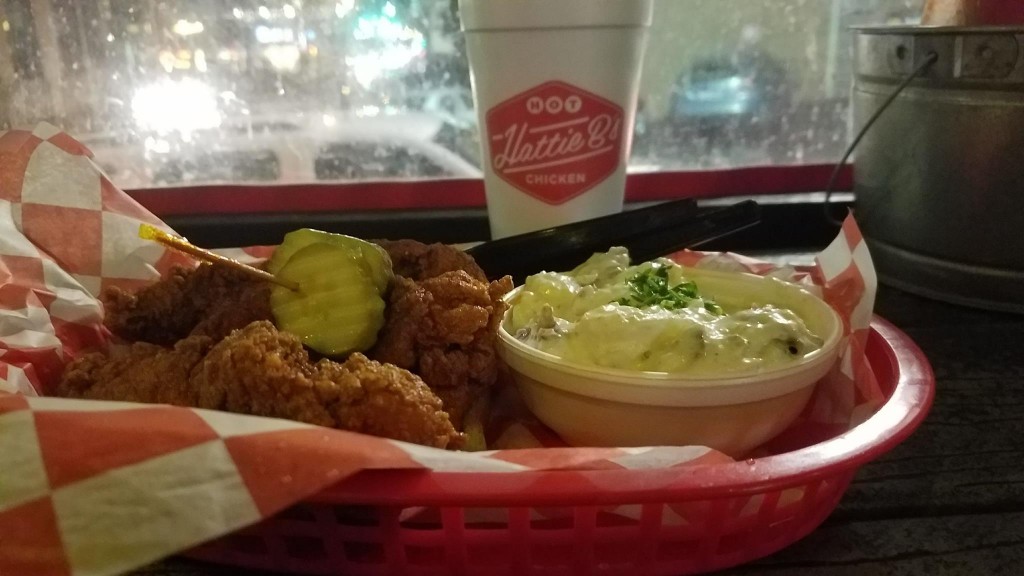 Fried chicken isn’t really my meal of choice most of the time, but I figured, “When in Nashville, eat hot chicken.” I’m so glad I did. The chicken was perfectly spicy, hot and fresh. The breading had so much flavor and seasoning with the perfect amount of crunch that fried chicken should have. The interior meat was juicy and complimented the crispy skin. I also ordered sweet tea, based on a Yelp review I read. Ah, man… one sip and you know you’re in the South.

After dinner, we enjoyed our food coma with the premiere of The Bachelor.

Why is it that unhealthy foods always leads to more unhealthy food? Well, I definitely felt that sweet tooth, and I wanted some ice cream after our delicious dinner. We braved the rainy weather for Jeni’s Spendid Ice Creams in East Nashville. They had a variety of unique flavor combinations in this homemade ice cream shop. 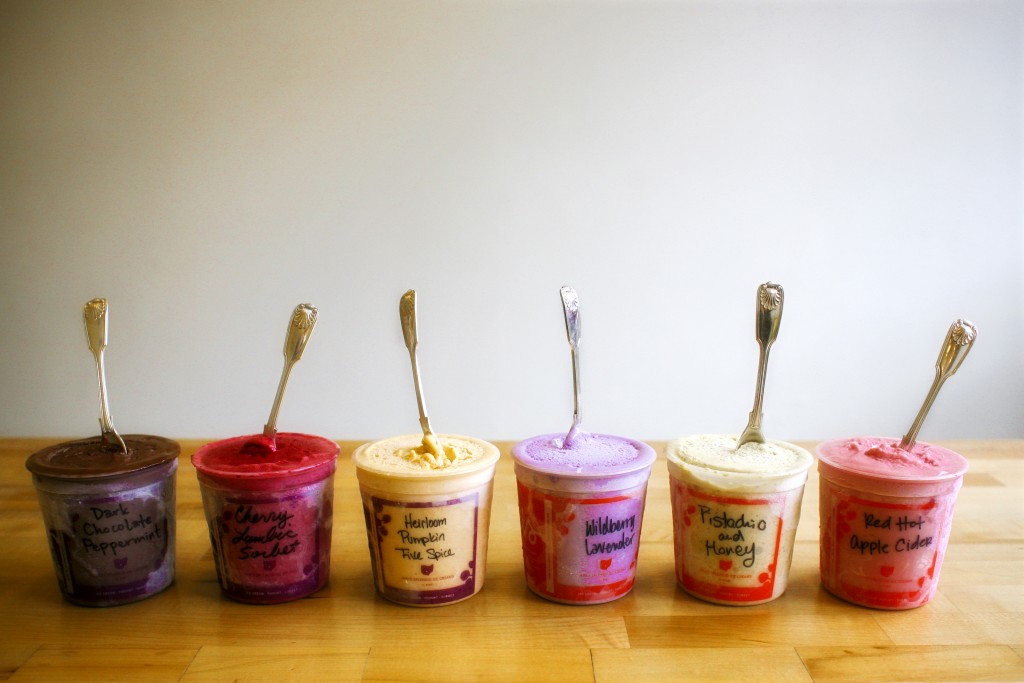 Other Recommendations for a Visit to Nashville:

Throwback to when I visited the Grand Ole Opry with my parents when we visited Nashville for Ashley & Justin’s Wedding in September 2014! 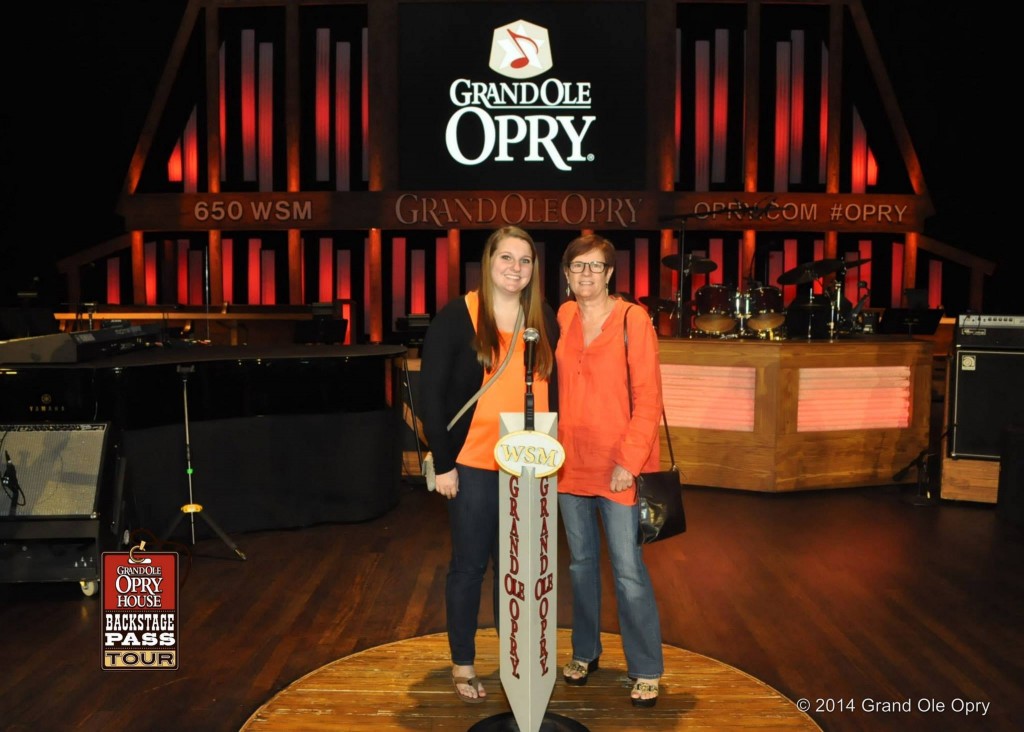 We had a great visit to Nashville, being able to see old friends, showing Brighton more of the Southeast, and spending time with my sister. It was a great way to kick our 2017!

What did you do to celebrate the New Year? Have you been to Nashville? What are your favorite spots?

What I Collect [30 Day Challenge]