(This post is a continuation of my Labor Day Weekend trip. Click the links for our other explorations at Kannaraville Falls, Calf Creek Falls, and Emerald Pools in Zion!)

After waking up and enjoying the sunrise at our campsite, we packed up and headed out towards Escalante National Monument. We were both ready for some hot scrumptious breakfast and coffee, so we pulled off to Bryce Canyon Pines Restaurant. Breakfast hit the spot for both of us and fueled our next adventure— Zebra Slot Canyon. I have wanted to check out some slot canyons since I moved and realized it’s an essential adventure to have while in Utah. I had actually found Zebra Slot Canyon while doing some research in March/April for desert adventures to escape the winter in Salt Lake. Brighton and I decided against going at that time for a few different reasons, including risk of rain/flash floods  that weekend, but it still was on my bucket list.

When Courtney said she wanted to go on adventure that was relatively close to Salt Lake, I had made up my mind on Escalante. From Highway 12, turn onto Hole in the Rock Road. It’s a dirt road, but it was suitable for passenger cars too. Drive about 7.5 miles down the road, and you will come to a parking lot right off the side of the road past a cattle guard. The lot isn’t marked, but there’s an obvious trail across the road that is where the trail begins. We saw lots of cars and knew that it was the spot. (We also used Google Maps before losing service and that helps tremendously!)

According to Google, there is an actual address. As always, be cautious and plan your route ahead of time.

There were a couple other groups of 2 leaving around the same time as us, but it seemed like it was a pretty remote area, especially given the holiday weekend. When you approach the trail, there is a large sign that has all these scary warnings like, ”STOP: DO NOT CONTINUE IF YOU DO NOT HAVE 4L OF WATER PER PERSON” and there’s one about being able to navigate when there’s no trail. We looked at these signs, and usually I completely disregard them if I have water, snacks, sun protection, first aid, etc. but this time it scared me a little and we turned back to get more water. We definitely didn’t need as much water as they told us to bring, but in the desert, it’s a “better be safe than sorry” attitude. We found the trail relatively easy to follow, though we did turn down the wrong side of the trail a couple times. After about 15-20 minutes of walking along the trail, we came across another couple and their dog. They told us, “I hope you’re ready for a swim!” and I thought to myself, “Oh, I knew there was something I forgot… To check with the BLM office about the water levels!” and then I thought, “Um, NO… I am NOT ready for a swim.” They told us that the water levels were 5 feet of standing water, and at first I thought, 5 feet, no problem that’s nothin’… and then I realized I was imagining 5 inches instead of feet. BIG DIFFERENCE.

Another piece of information they gave us was to “cross the wash, don’t walk in it” and that suddenly made a lot of sense. After we continued on our path, we didn’t have any significant mishaps in route finding except in 2 locations.

There was no turning back now and I really wanted to see the slot canyon so we soldiered on.

We kept walking, following cairns and footprints, until we came to a place that confused us. There was this gate with barbed wire indicating that we should not pass it, but there was no other trail that made sense. We decided to venture past it, and discovered that the trail continued past it. When you visit, a word of advice is to stay to the right and go through the gate between the slats. You will see the trail faintly continues on the other side of the gate on the right. 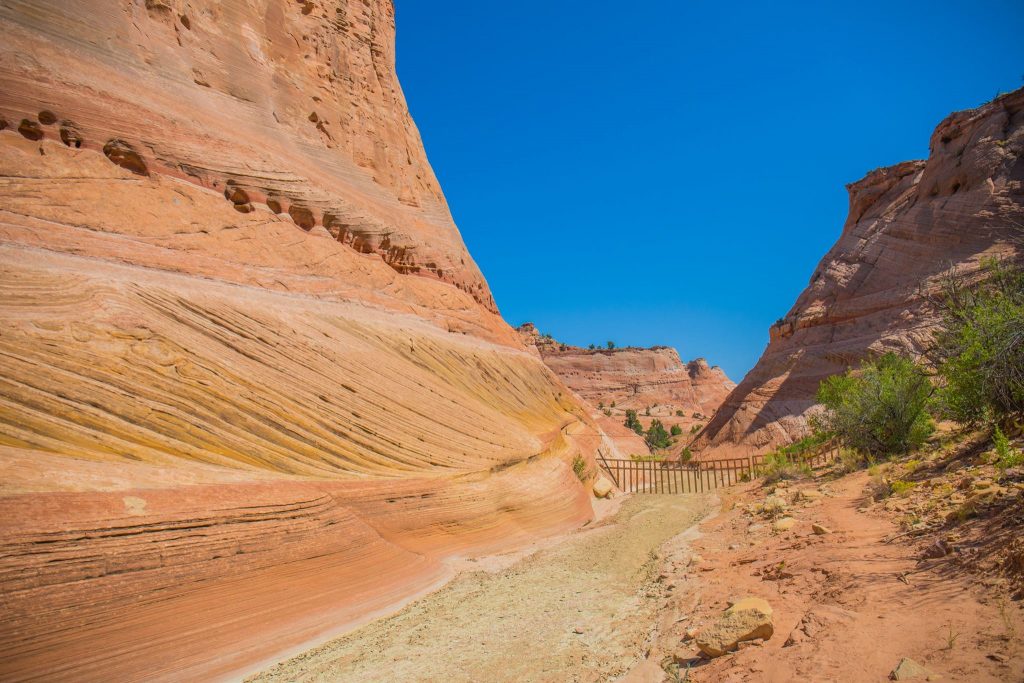 While on the trail, we also discovered a cairn that had a large real bone resting against it. We tried to figure out what it would’ve come from and enjoyed it, and then returned it to where we found it. Any ideas of what it’s from?? Something I really enjoyed about the trail was seeing the red rock swirl with layers of white for an almost “Wave”-like vibe. (In case you’re not familiar, there’s a place called The Wave in Arizona that has surreal striped/wave formations in the red rock. I haven’t been, but it’s high on my bucket list!! I haven’t been, but it’s high on my bucket list!! (Photo of the Wave below) After about an hour of hiking (I wasn’t timing), you come into the mouth of the slot canyon. At the time we went, the sand was wet and you instantly saw the standing water. A word of caution, the water is downright nasty! There are floating dead things and you cannot see the bottom. Just so you’re prepared. 🙂 It’s all part of the adventure! The water got deep quickly, within about 5-6 feet of entering the water, it was waist deep. There were others that were within the canyon that left their belongings outside of the water— We decided to do the same since we didn’t want to ruin our valuables. We brought my phone (with a LifeProof case) for photos and went for a swim. The water was cold, but refreshing. Even in the beginning of September, it was in the high 90s. There were places I couldn’t touch the bottom without placing my face under water, so I ended up treading water in a few places. The canyon itself was CRAZY. It was unlike anything I’ve ever seen in my life. The walls were this smooth striped color alternation— like a Zebra! 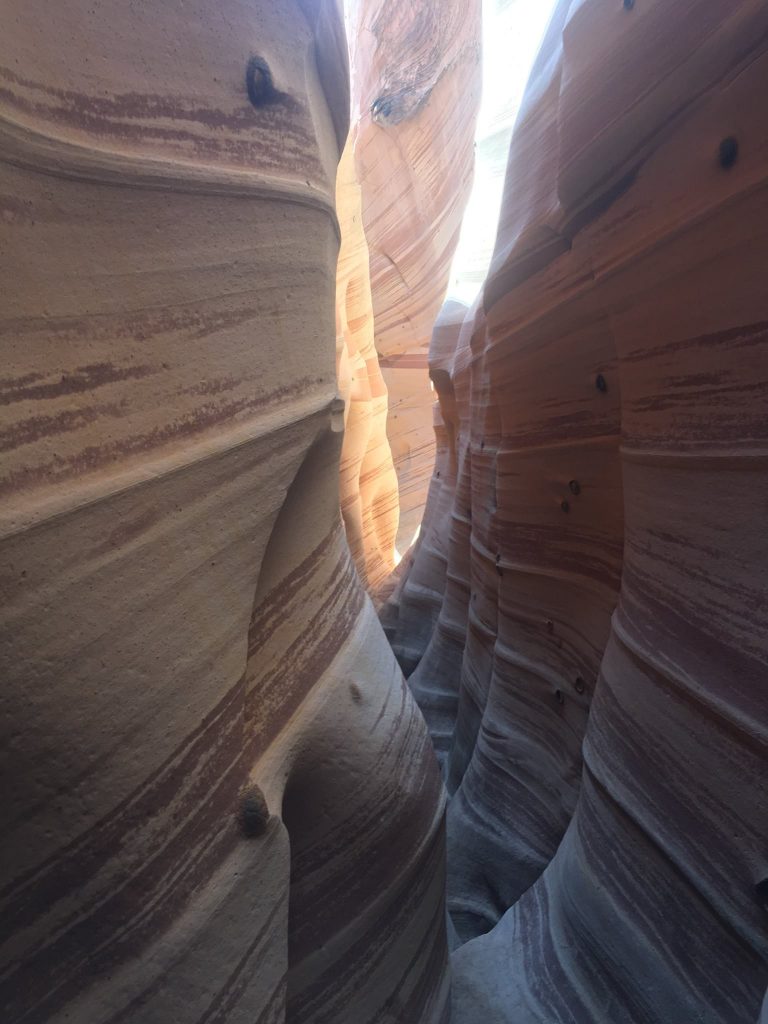 There were a few places where you could easily get stuck and your option was only climb up. We didn’t bring our shoes with us, but I read other trail guides that suggested bringing them with you and putting them on to do the climbing part where it’s dry. I don’t know if we would’ve been able to reasonably do that since given their photos compared to ours, we had significantly more water standing. After we spent some enjoying the slot canyon, we returned to the car the same way we came. Why is it that the way back seems so much more manageable? I felt like the trail was way easier to navigate on the way back (since we were retracing our steps). Whereas, on the way there, we were constantly questioning if we were going the right direction. I guess it’s all about perspective.

After we returned to the car, I was feeling a little overheated (not dehydrated) and I needed to cool down before our next trek. We drove along Scenic Highway 12 on our way to Calf Creek Falls.

Along the way, we stopped at the cutest little coffee shop build into the red rock called Kiva Koffeehouse and Kiva Kottage. Iced anything sounded good to us, and we’re glad we stopped. I highly suggest a stop if you’re driving along Highway 12! 🙂 *Only Open Seasonally from April to October*

It had a neat little history and architecture that I wanted to share with you:

Kiva Koffeehouse was created by artist, mentor, contractor, inventor and engineer, Bradshaw Bowman. The idea was born in 1990 and the structure was completed in June 1998. The main materials used in this structure are crafted wood elements from logs, stone and glass.

It took 2 years to collect the 13 Ponderosa Pine perimeter logs from the high forests of the West. Some of these logs have nearly 300 rings, existing even before our country was born. The smaller interior logs and Vigas (rafters) are Spruce. The latillas are from smaller Lodge Pole Pine. The sandstone walls were quarried from our on-site quarry.

Mr. Bowman, at a very young at heart age of 87, completed Kiva Koffeehouse. He worked to create and continue this project, which is Kiva Kottage, embedded in the rim beneath the KIVA.

Our adventure continues in my next post (coming soon) — Calf Creek Falls in Escalante National Monument.

Have you ever been in a slot canyon? What did you enjoy about the unique experience?