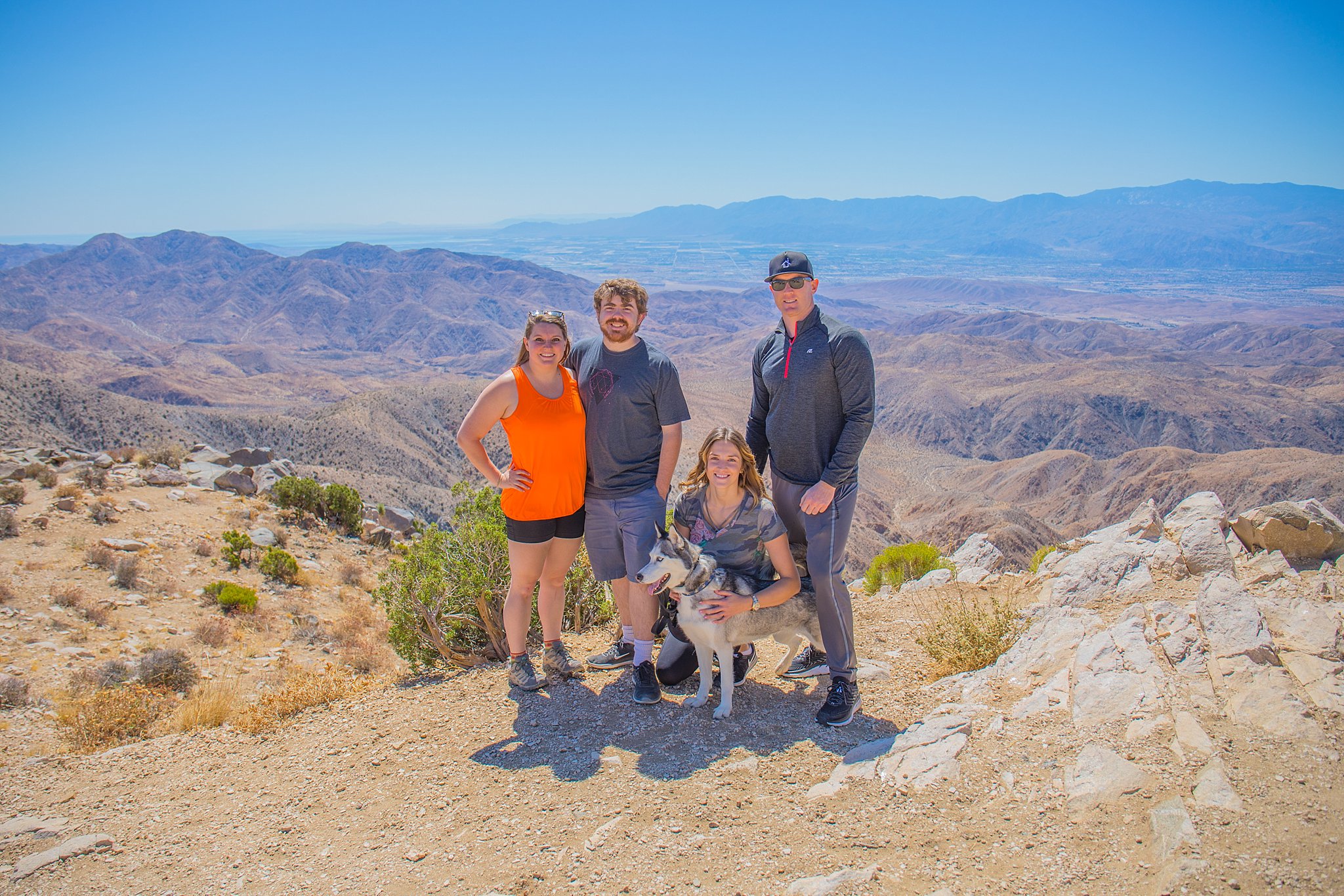 If you follow me on social media, you may have noticed that a few weeks ago a new dog started popping up in my photos— a beautiful husky named Mika! And before you ask, we have not adopted a new dog. We are long-term dog-sitting my brother in law’s husky while he moves to NYC and adjusts. Side note— Everyone asks me how long exactly is “long-term dog-sitting” — the answer is undecided, but the answer is a couple to a few months. Koda seems to really enjoy having Mika around, and we both get to walk a dog so she’s a welcome guest. 🙂 Anyways, it was a last minute trip and decision, and I didn’t want to request time off in addition to the weekend, so we drove a lot and made the most out of it. Our decision of where we ended up was largely decided on what hotel rates I could get on such short notice. We ended up booking Palm Springs, CA since that’s what I could find at a great rate— and we’d never been there!

We started early on Saturday morning and headed towards Palm Springs. We drove down through Vegas, and started heading southwest. I do my best to find things around the route that may be of interest to make the trip feel less long and more meaningful. We had seen Big Bear Lake on Masterchef recently, and decided to check it out. On our way, we stumbled across a traffic jam and we had no idea what could be happening in the middle of nowhere. It turns out a movie or commercial were filming a motorcycle chase scene. It was pretty exciting (because I get excited over little things like that)! 🙂 Big Bear Lake reminded me of Lake Tahoe and Park City mixed together. We drove along the outskirts of the lake looking for a nice overlook. I found a hike — Castle Rock Trail — that looked like it was interesting and worth it, but we decided we didn’t have enough time to finish our drive in a reasonable amount of time so we settled for a small park on the edge of the lake— Boulder Bay Park. It was free to visit, and was quite popular given the size of it. It seemed like a birthday party was going on there. We took some photos and selfies and moved on. We really enjoyed driving down the mountain side looking down on the San Bernardino Mountains. Sunset was very pretty and crazy hazy. We stopped a few times to get some photos, but of course it didn’t do the sight justice.

After we checked into the hotel, we were starving so we found a restaurant to get dinner with Brighton’s brother, Chase. It turns out there was the LGBQT Film Festival happening in Palm Springs, so almost everything was booked out in advance so we ended up at Venezia. It was also busy, but not nearly as busy as downtown was when we drove by. The food was decent, but California prices for sure. Honestly, it was great just to get some pasta and catch up with his brother and girlfriend, Edyta. 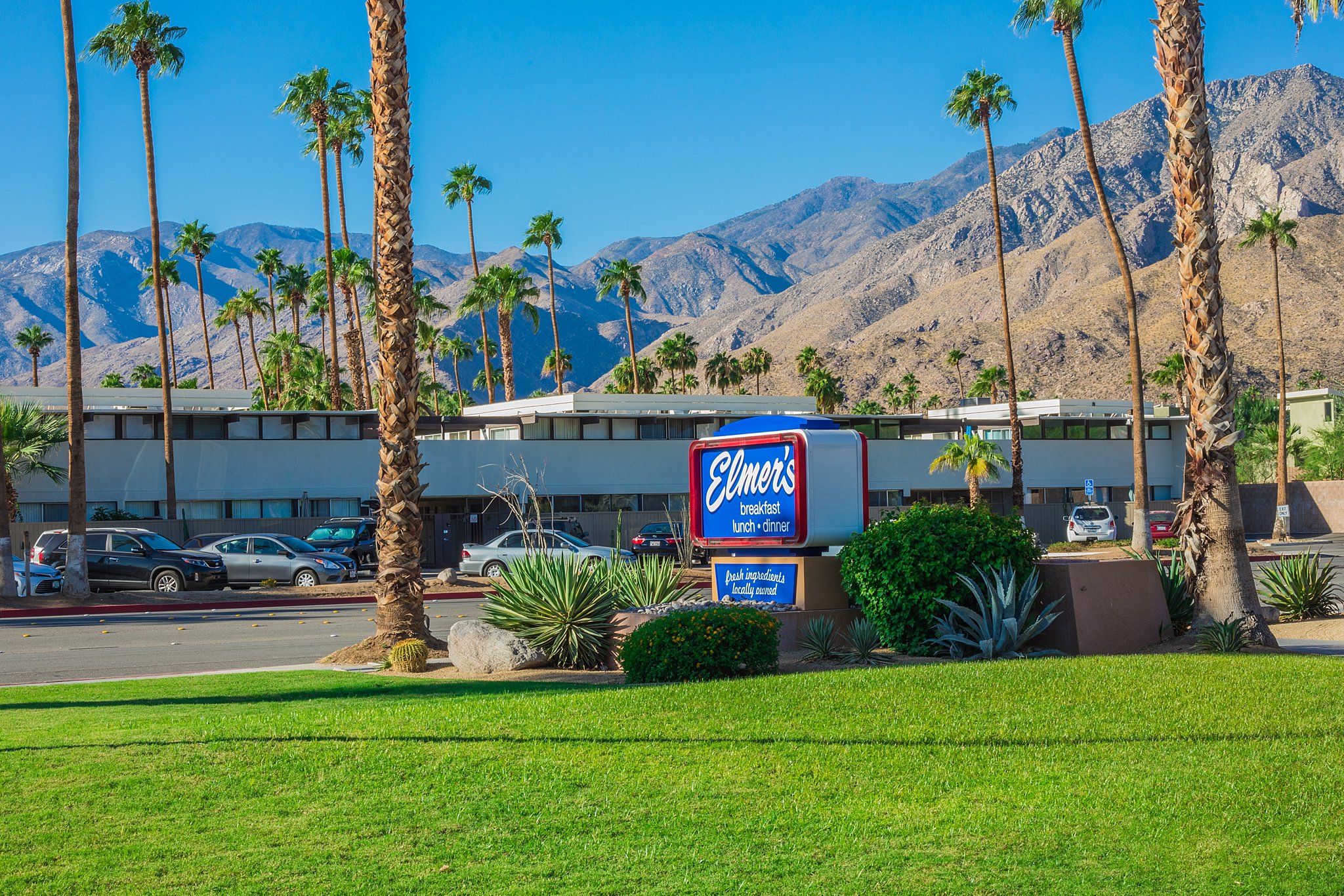 The next morning, we woke up early to get a good start on the day. We had looked for brunch places to meet at and found Elmer’s Restaurant. It’s one of the most reviewed places on Yelp. I thought it was local to Palm Springs based on the reviews I had read, but when we arrived I discovered it’s a regional chain that started in Portland, OR. I had read many reviews that cited long waits, and I suppose we got very lucky as we walked in and were seated immediately.

I was a little underwhelmed by the place to be completely honest, but the most impressing part was their “famous pancake” which was pretty cool. It didn’t taste like a normal pancake— it had more of a light, fluffy, crepe-taste to it. The prices were affordable and it was a pretty standard breakfast place experience.

After we finished breakfast, I had to make a stop at a local coffee shop. (Random thought: Is this becoming my thing? I realize I do it on almost all of my road trips!) I found one called Ernest Coffee on Yelp, and it was exactly what I was hoping for— hip, cool interior, and fast. 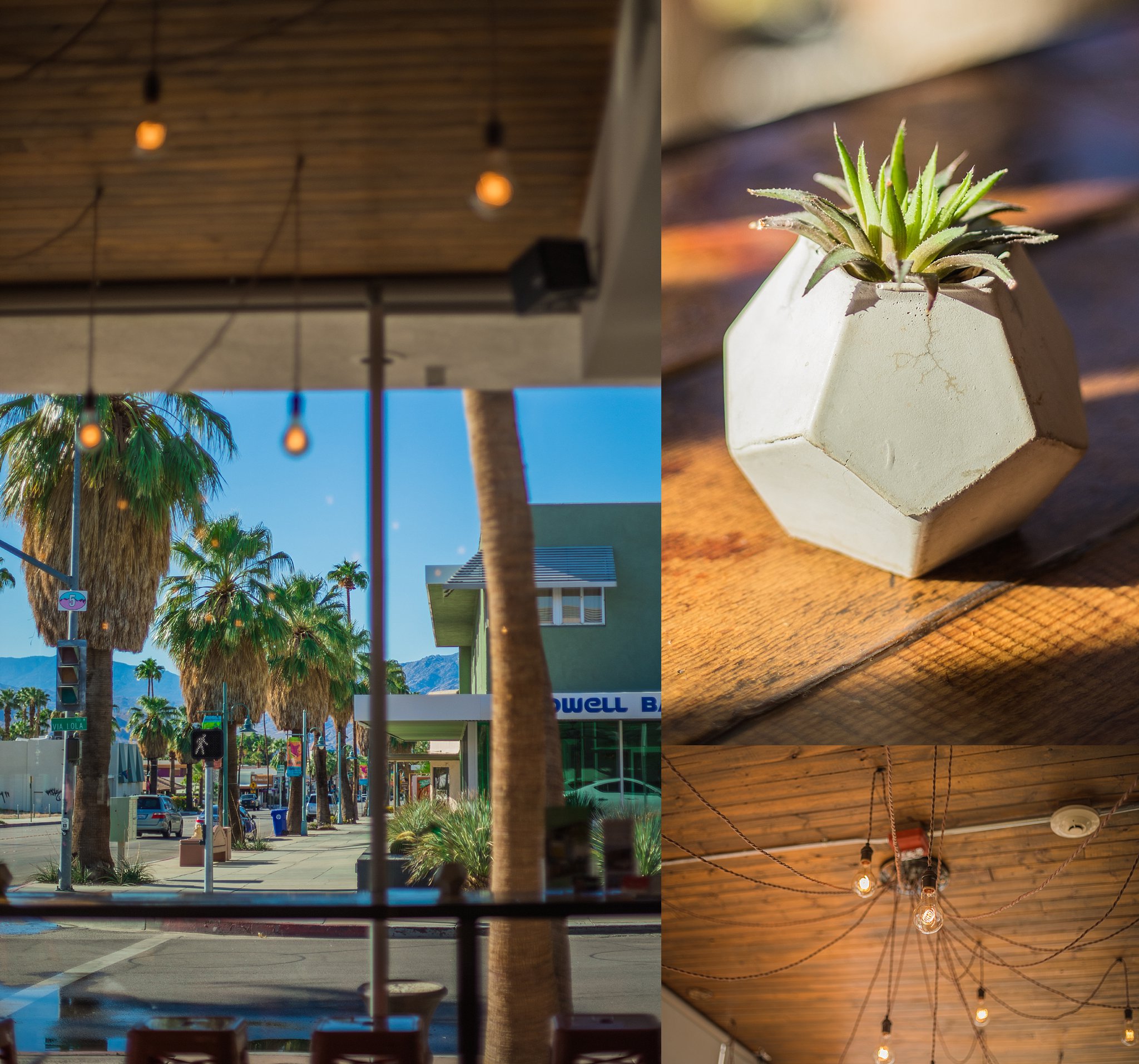 They had the coolest wallpaper I’ve seen in a coffee shop: bookshelves! Anyways, the coffee was good, the people were cool, and I could definitely see myself hanging out in there writing this blog post or editing photos. Another national park marked off the bucket list! Joshua Tree is named for the Joshua trees (Yucca brevifolia) that are native to the park. The park is situated within two deserts— Mojave (higher elevation) and Colorado (lower elevation). The Mojave desert is the habitat of the Joshua trees such they live in the higher elevation areas. Another interesting part of this park is the large rock formations that scatter the landscape. They are popular for climbers. I felt like it was a giant playground, full of nooks & crannies to explore with the “Dr. Seuss trees.”

Since we had only the morning to explore, here the key spots I’d recommend: 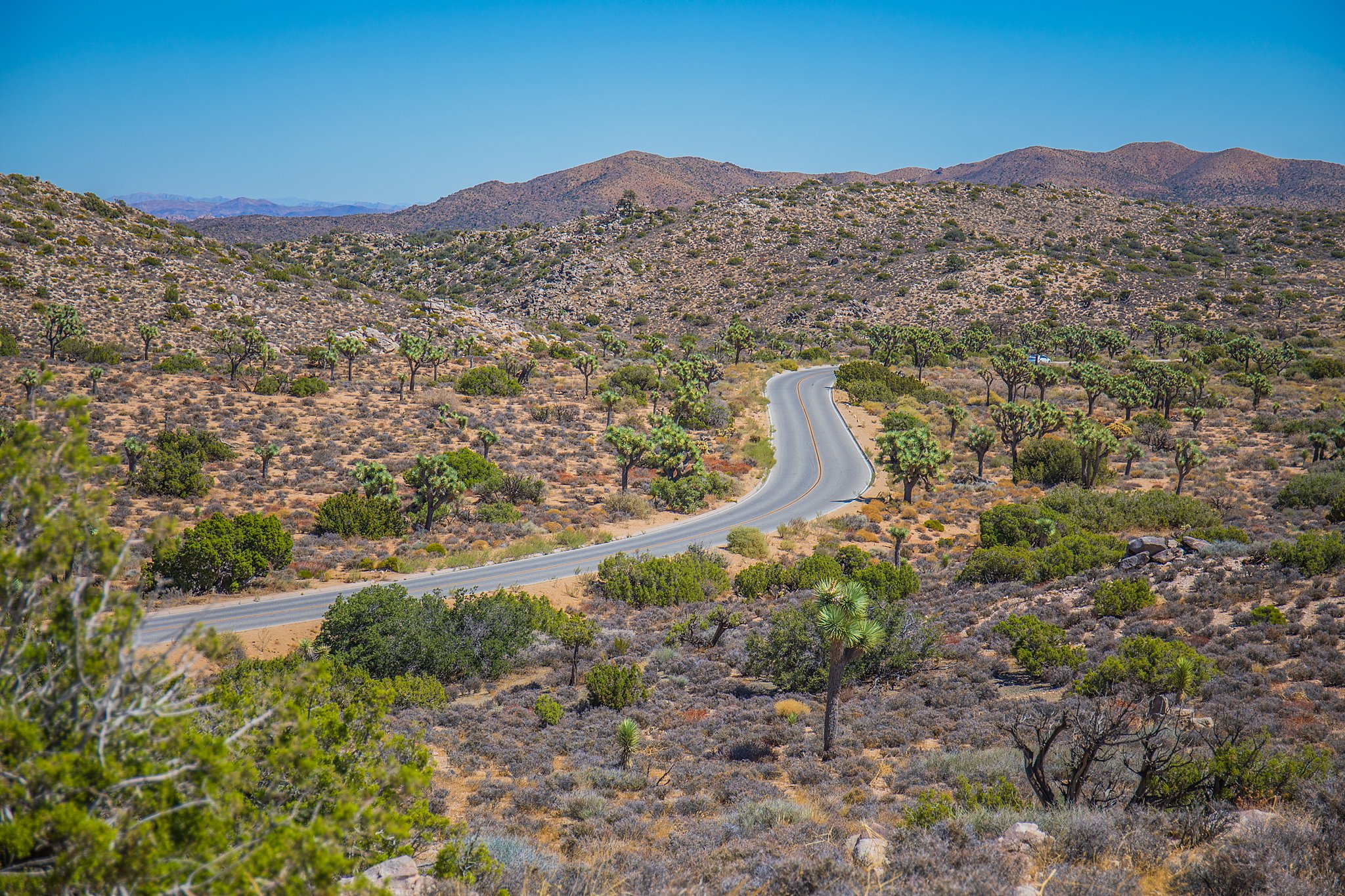 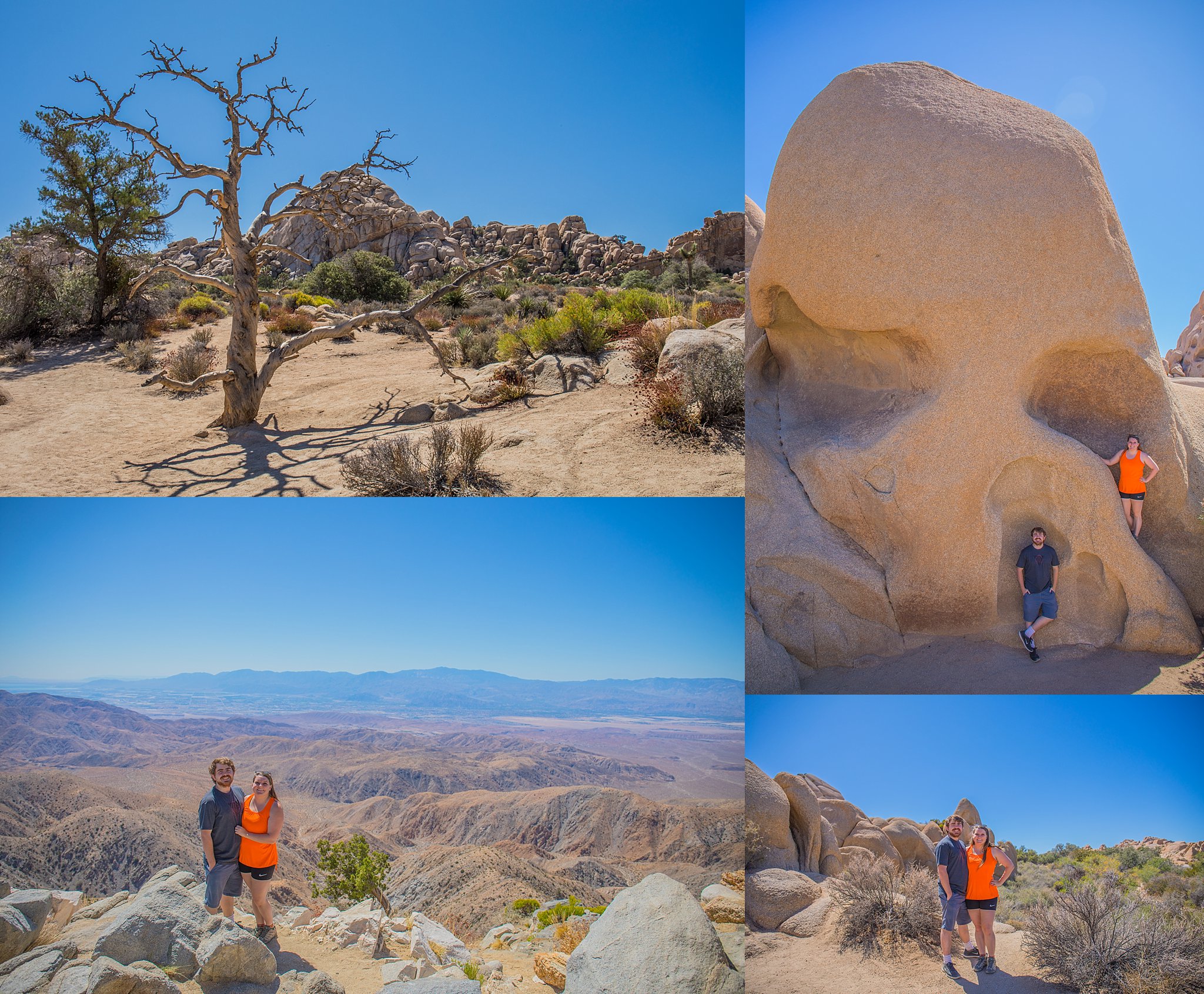 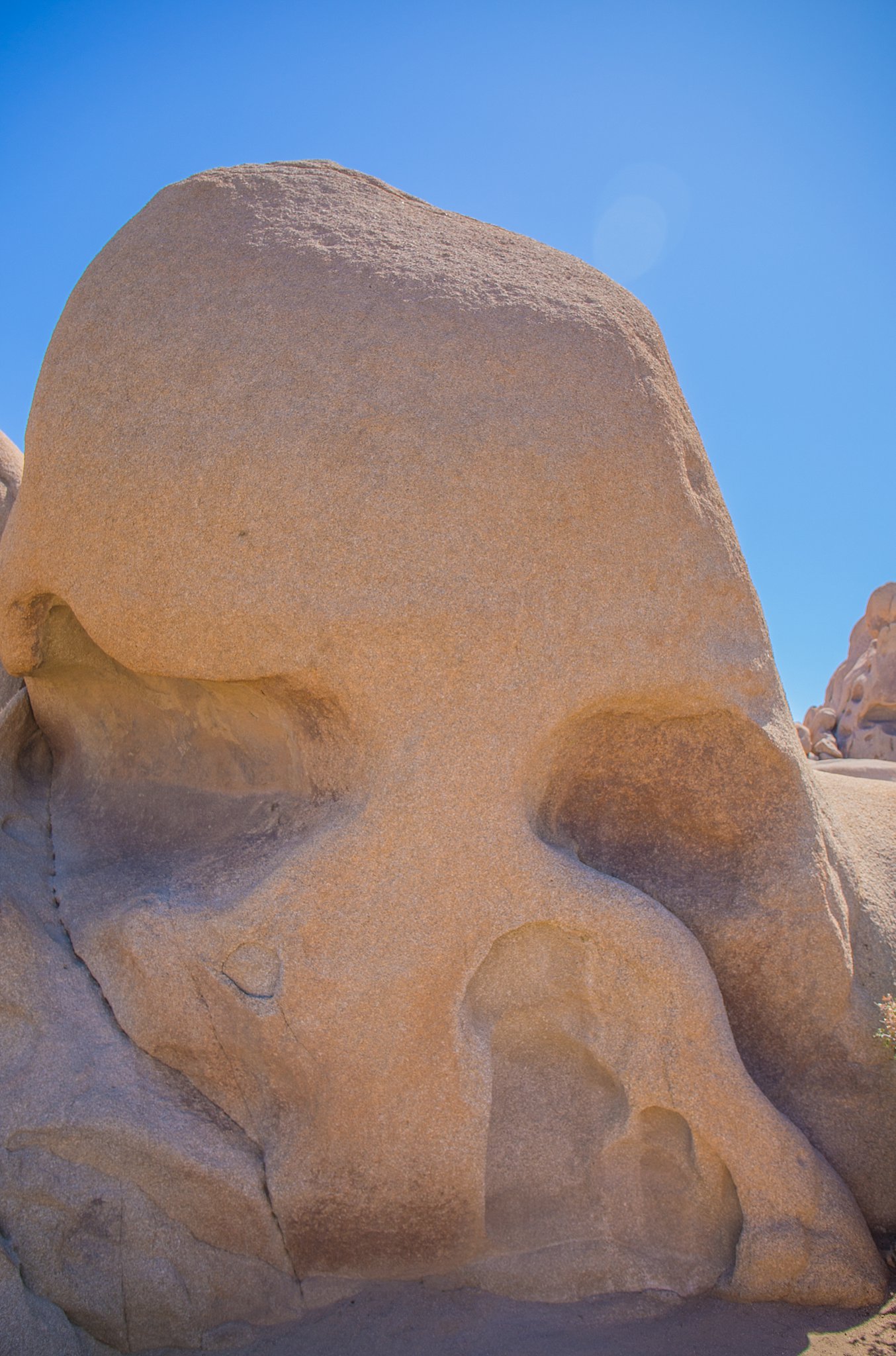 After we spent some time in the park, we drove back home to Salt Lake — Mika (the husky) in tow. We stopped at some sketchy places in the middle of nowhere in California, including the only gas station for miles that had vintage pumps and gas was $5.00 a gallon! Ouch. We entertained ourselves by listening to HOURS on end of the first season of the Serial, the podcast. (Yes, I know I am late to the party on that one.) If you have been to Joshua Tree, what was your favorite part of the park? If you haven’t been, what are you looking forward to?