On Saturday, we woke up to the Amphitheater of Hoodoos in Bryce Canyon National Park. It’s quite the view from Bryce Point in the morning. All of the research I did said that the best place for sunrise was not at Sunrise Point (odd, right?), but at Bryce Point. Erica and I were a little late to the sunrise but we still got to enjoy the warm morning sunlight at the amphitheater. We also got up close and personal with deer roaming around in the park.

We decided that our next stop was Arches National Park, which was a four hour drive from where we were at Bryce Canyon. The Arches has been one of my favorite National Parks that I’ve visited out here in the west. There’s just something magical and majestic about these giant structures created by the natural elements. I wanted Erica to witness the awe-inspiring arches too.

Our first stop was the Delicate Arch. This is the iconic arch that most people recognize or think of when they think of this National Park. It’s even on Utah’s License plates! 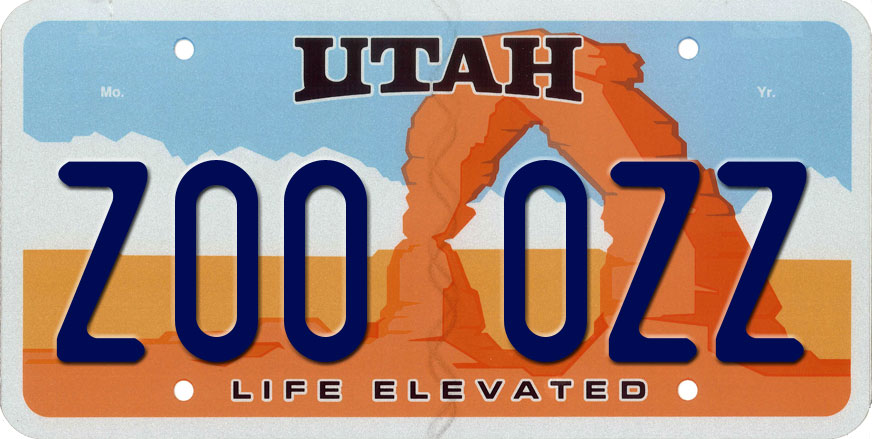 The hike to get to the Delicate Arch is 1.5 miles long. It’s all uphill, but it’s only moderately strenuous about halfway through. Once again, the weather was great with occasional strong winds. I’ve done this hike back in November with my dad when we first came out to visit and look for somewhere to live out here. The hike itself seemed a lot shorter the second time around. One of the reasons I like the Arches is that you get to be right there inside and all around them. They seem a lot bigger in person that in photos.

I also had been told that the Windows Section was a great short hike with really cool arches so that was our next stop. I hadn’t gotten a chance to see them with my dad so I was excited to see them.  The hike wasn’t intense for the windows at all. By the time we got to them, we just enjoyed the setting sun and the area that we were in. I felt on top of the world climbing around in them.

My new favorite arch was by far the Double Arch. It’s essentially two arches right next to each other. It’s another popular fan favorite in the park.

According to the National Park Service website, these arches are formed for a couple different geological reasons. This is the description from their website:

First, you need the right kinds of rock.

Sandstone is made of grains of sand cemented together by minerals, but not all sandstone is the same. The Entrada Sandstone was once a massive desert, full of shifting dunes of fine-grained sand. The grains are nearly spherical so, when packed together, they formed a rock that is very porous (full of tiny spaces).

In contrast, the Carmel layer just beneath the Entrada contains a mix of sand and clay. Clay particles are much smaller than sand grains; a lot of them can pack together and fill in gaps between the sand grains, making the rock denser and less porous than a purer sandstone.

Crack it into parallel lines.

Deep beneath the surface lies a thick layer of salts. Squeezed by the tons of rock above it, the salt flowed and bulged upward, creating long domes. The rock layers covering these domes were forced to crack, like the surface of freshly-baked bread, into a series of more-or-less parallel lines.

Next, add the right amount of rain.

On average, the park receives 8-10 inches (18-23 cm) of precipitation a year. That might not sound like much, but it’s enough to keep the engines of erosion working 24 hours a day, 365 days a year.

Drops of rainwater soak into the porous Entrada sandstone easily and then slowly dissolve the calcite bonding the sand together – in other words, rotting the rock from the inside out. Water puddles just above the denser Carmel layer where it erodes a cavity, like food trapped between your teeth. In winter, water trapped between the two layers expands when it freezes and pries the rock apart.

If the park received too much precipitation, the sandstone could erode so quickly that arches might not have time to form. If it never rained here, the engines of erosion would stop.

Luckily, earthquakes are rare in this area. If the ground shook often, these massive outdoor rock sculptures would splinter and collapse. The fact that over 2,000 still stand, waiting for visitors to discover them, tells us this area has been rather geologically stable for at least 50,000 years.

Lastly, pick the right time to visit. (You did.)

The rock layers visible in the park today were once buried by over a mile of other rock that had to erode first to expose what lied beneath. Visitors one million years ago might have seen an endless flat plain dotted with vegetation. Imagine a visit 100,000 years in the future, when the Entrada and Carmel layers have fully worn away. What new rock shapes might you discover then?

They described that process better than I would.

All in all, there is still so much more to see at the Arches that I still haven’t seen. Moab seems like a pretty awesome place in general. Lots of outdoor adventure opportunities, especially in the summer. I’d like to go back and experience more of what it has to offer when I have a few days to do so. Arches is still one of my favorite National Parks that I’ve visited over the past few months. It was my first impression of Utah’s natural beauty in November, and it does not seem any less impressive the second time around.