After Day 1: Goblin Valley State Park & Natural Bridges National Monument, we woke up early enough to catch breakfast at the hotel, grabbed some coffee and gas, and hit the road towards Page, Arizona. When we were planning this trip, Kelli wanted to go south instead of north so we had less of a chance of hitting snow. Naturally, we headed to the red rock deserts. We tossed around some ideas, and I had been dying to go to Antelope Canyon… so we booked a tour and hoped for the best. 🙂 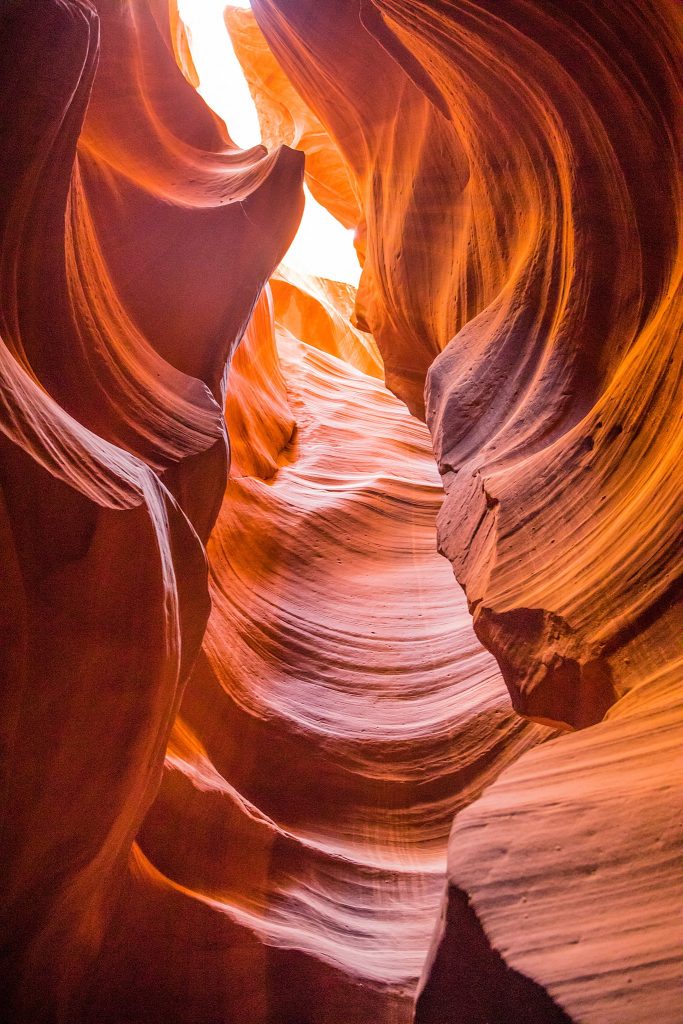 Since you cannot drive your own vehicles to tour the canyons, you must go with a licensed tour operator. They used to allow it, but it got a little out of control and there was vandalism, so they stopped allowing individuals. 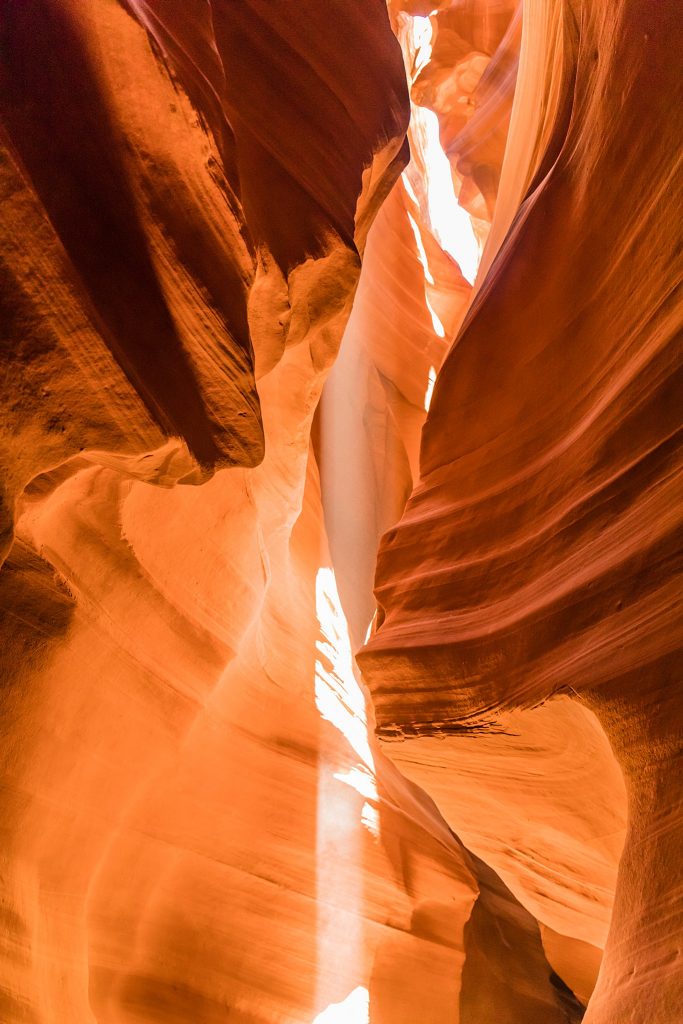 I didn’t know much about what I should be booking on this tour, but some brief research uncovered that the middle of the day tours (between 10:30-1:30pm) is when the light beam comes down the canyon. Apparently this only happens between April and September, but we still caught it briefly in October. This is what you see in many photos of the canyon, but the canyon is extremely photogenic regardless of when you visit. Many companies offer a standard tour and a “photography tour” which allows you to bring a tripod and more gear on the tour. On the standard tour, we were limited to a small purse and a camera. 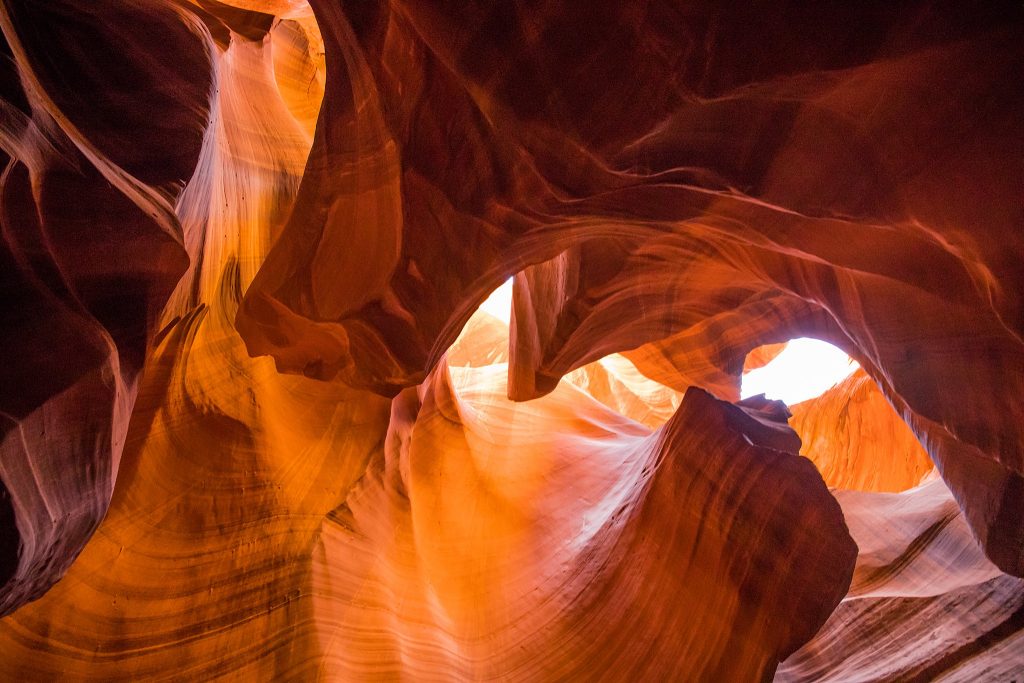 Our tour company was with the Antelope Slot Canyon Tours by Chief Tsosie. We both enjoyed our tour guide, but honestly, there were so many tours going on at the same time, you could listen to the other guides as well. Our guide pointed out all of the different formations and what the Natives have named them. I was constantly snapping photos that I found it difficult to listen to the full tour, but I wanted to savor every moment of it. What I did enjoy was the tour guide was willing to take the photos on everyone’s individual cameras without any complaint. And, he did a pretty good job! 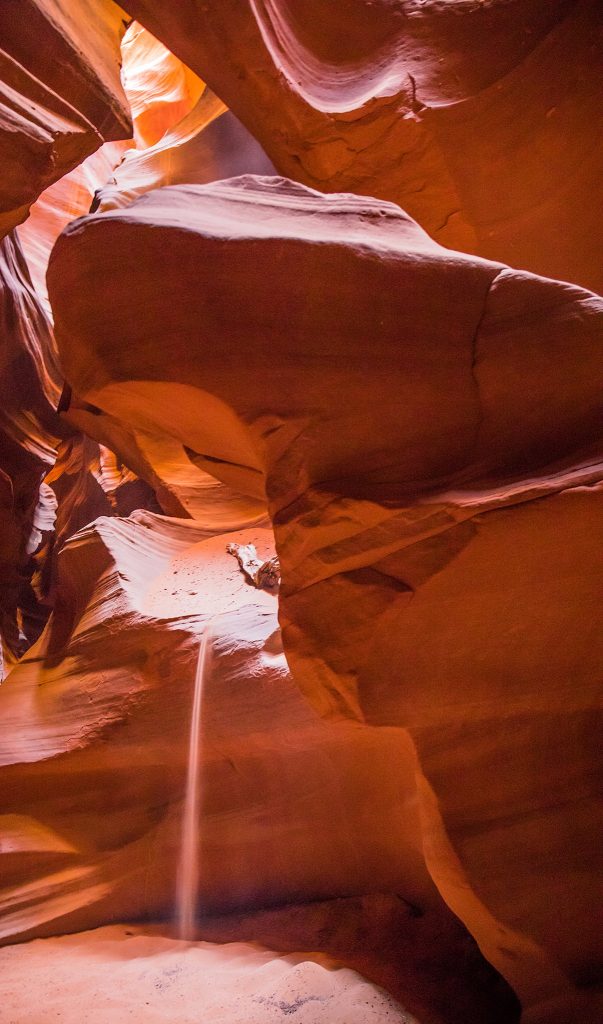 Overall, the experience within the canyon was definitely unique and a trip of a lifetime. If you go, make sure you look up and down and at the canyon walls from different angles. It’s amazing how smooth and uniquely shaped the walls have become with time, wind and rain. It’s difficult to articulate all of the details about the experience, so I will go with a photo-journal approach with this one. 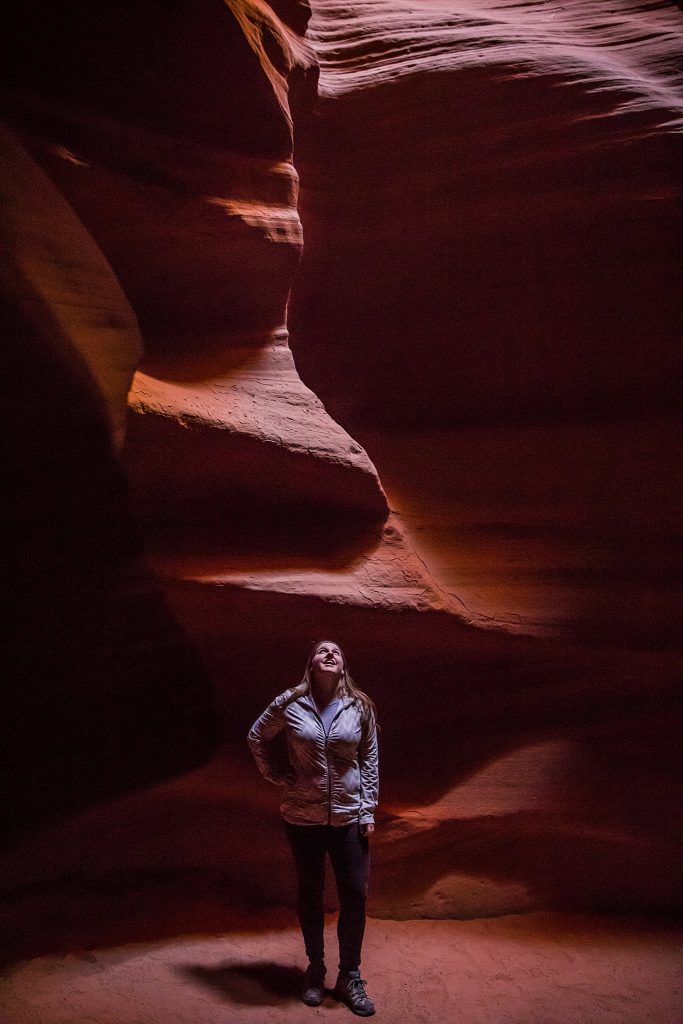 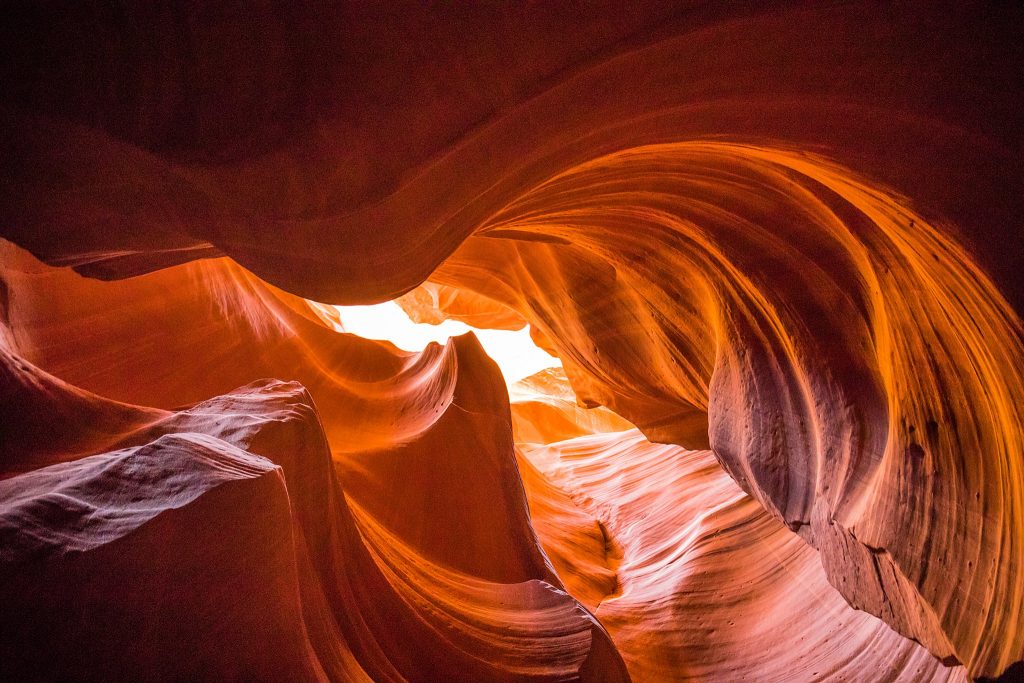 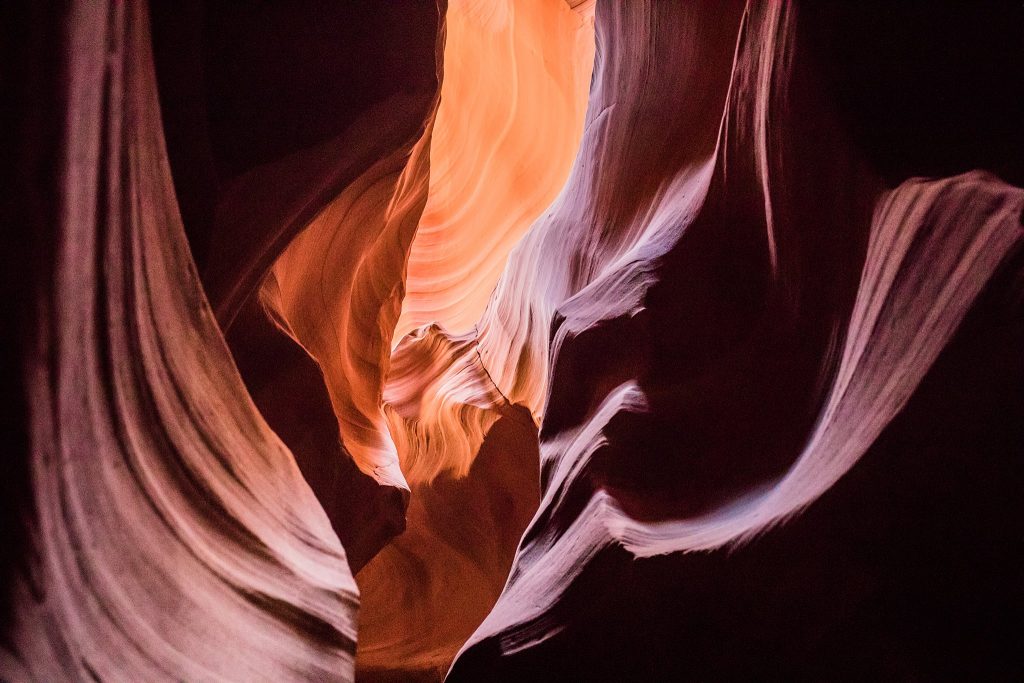 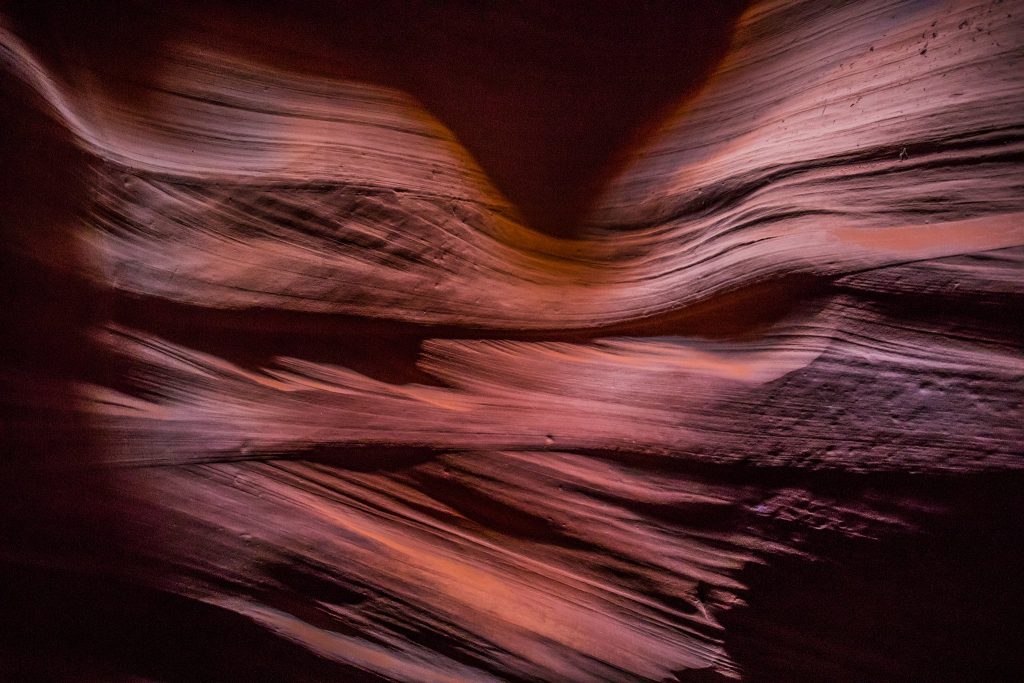 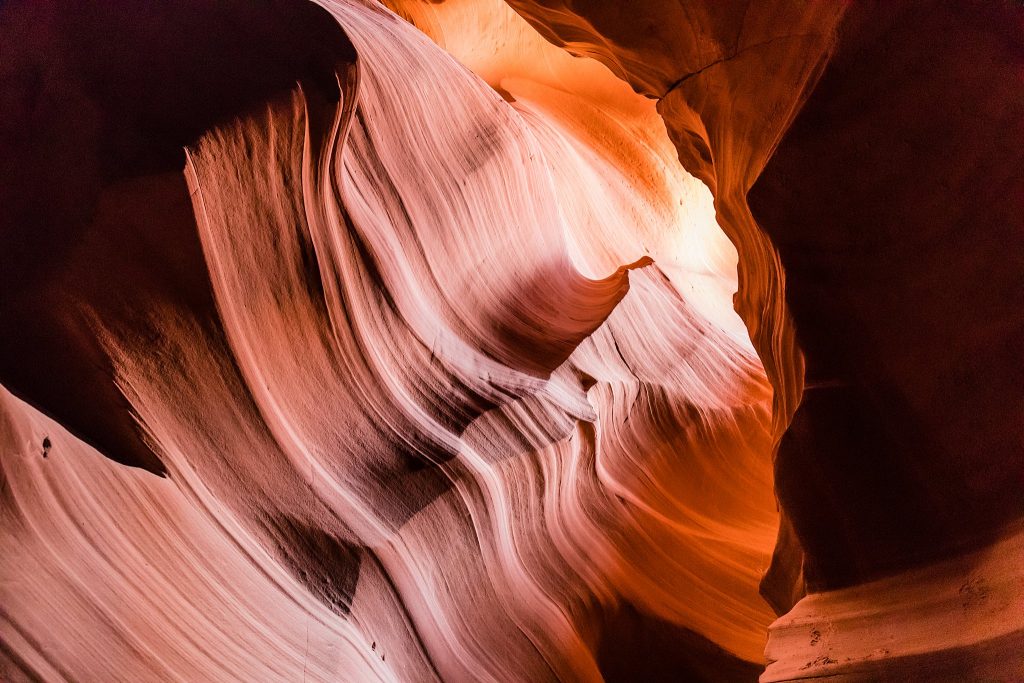 Just outside of town in Page, Arizona is Horseshoe Bend. It’s a short hike to the overlook, and 100% worth the stop if you’ve never been. I visited back in November 2016 on our way back from San Diego after Thanksgiving. I love the vivid colors of the red rock and iron-stained walls with the green and blues of the algae and water of the Colorado River far below. 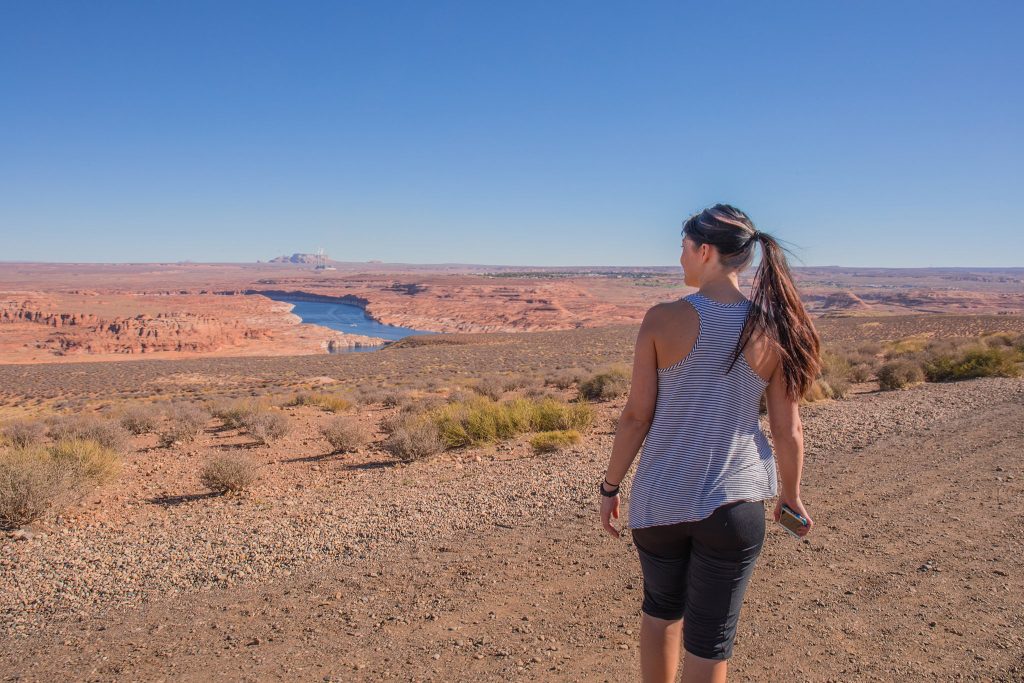 After our stop to Horseshoe Bend, I realized we forgot to visit Lake Powell which I had never seen but been close to many times. We found the Wahweap Overlook, but in all honestly it seemed like Lake Powell is better enjoyed from the water itself. Next time, I’ll plan more time to truly give it a visit. This is another reason why Utah is so great to live in — there’s always new adventures to be had! We grabbed a couple “Route 44” limeades from Sonic — Something Kelli introduced me to. Who knew there was such thing as a 44 oz. drink?! It barely fit in my hand, let alone the cupholders! After a jam-packed day of exploring and driving, we took a load off at our hotel in Flagstaff and Ubered to a nearby restaurant called the Lumberyard Brewery. We enjoyed giant mason jar sweet alcoholic drinks and dinner. I got the Vietnamese Burger — highly recommended on Yelp and by the waitress — and it was AH-MAZ-ING. Brighton would’ve been jealous as he is a burger expert. 😉 The burger is topped with Char siu pork, pepper jack cheese, pickled daikon and carrots, julienned jalapeños, cucumbers, cilantro, sriracha aioli and served on a Bolillo bun. Sounds weird? Yes. Delicious? YES!

We went to bed full and ready to tackle our last day of adventure in Sedona!