After seeing so many posts on Facebook about Franklin Falls, I decided it seemed like a good, easier hike for Brighton and I to visit on our 52 Hike Challenge. Even if it’s a popular hike, I wanted to check it out. 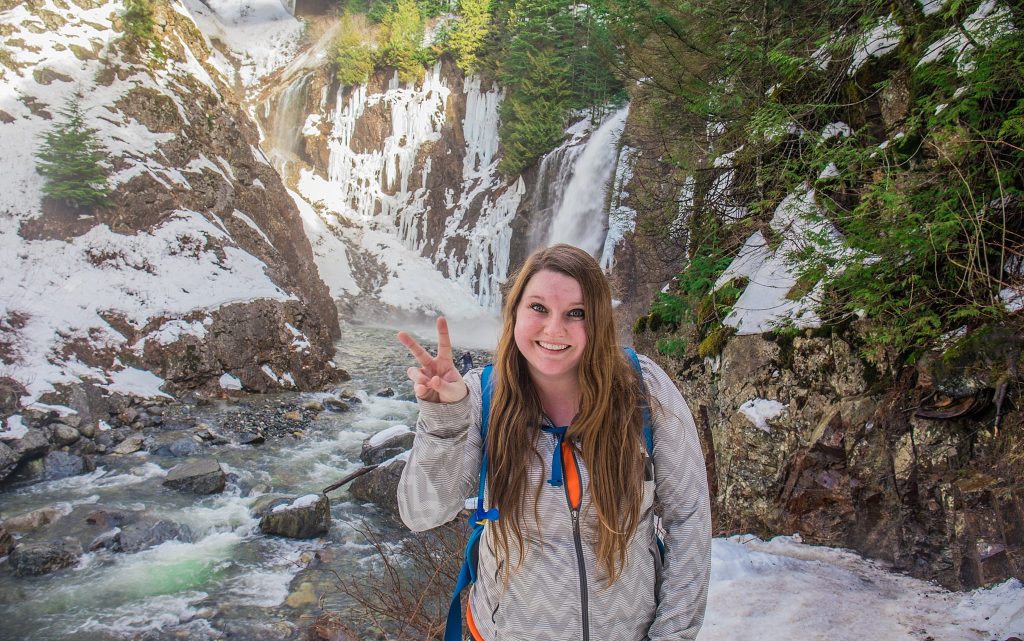 I had read online that spikes were necessary, I ordered some online from Amazon for both of us. I was so glad that I did because there were several extremely icy parts and it helped to have extra traction (more than Yaktrax). We got these which were affordable and have worked well so far! 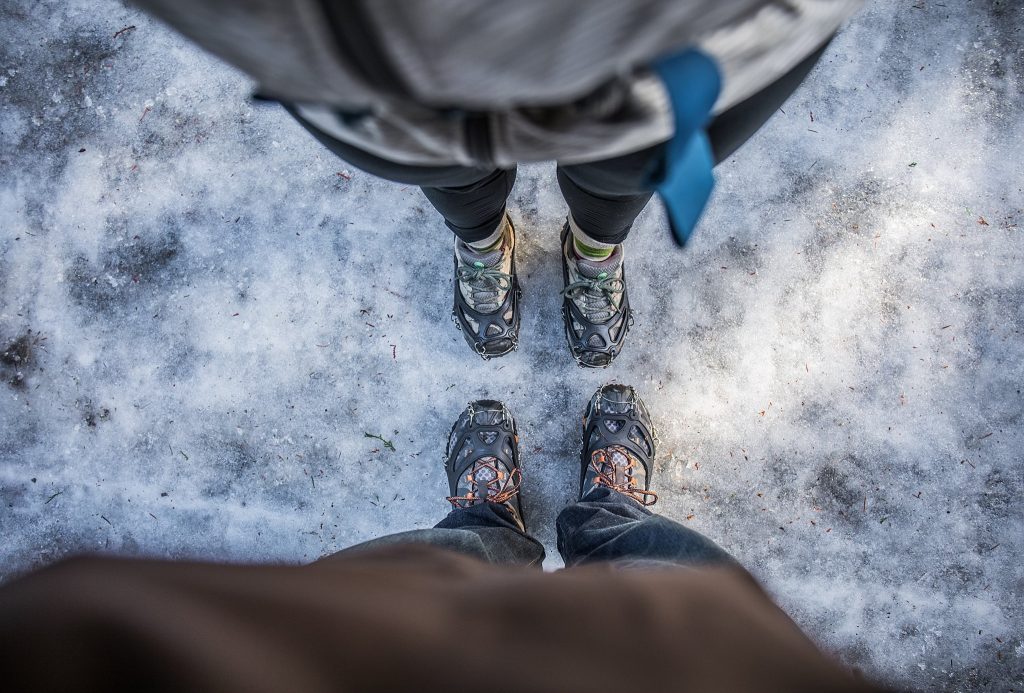 We chose to go on a sunny day, which I am learning, is rare in the Pacific Northwest for winter. I basked in the sun and enjoyed the photo op on this bridge. 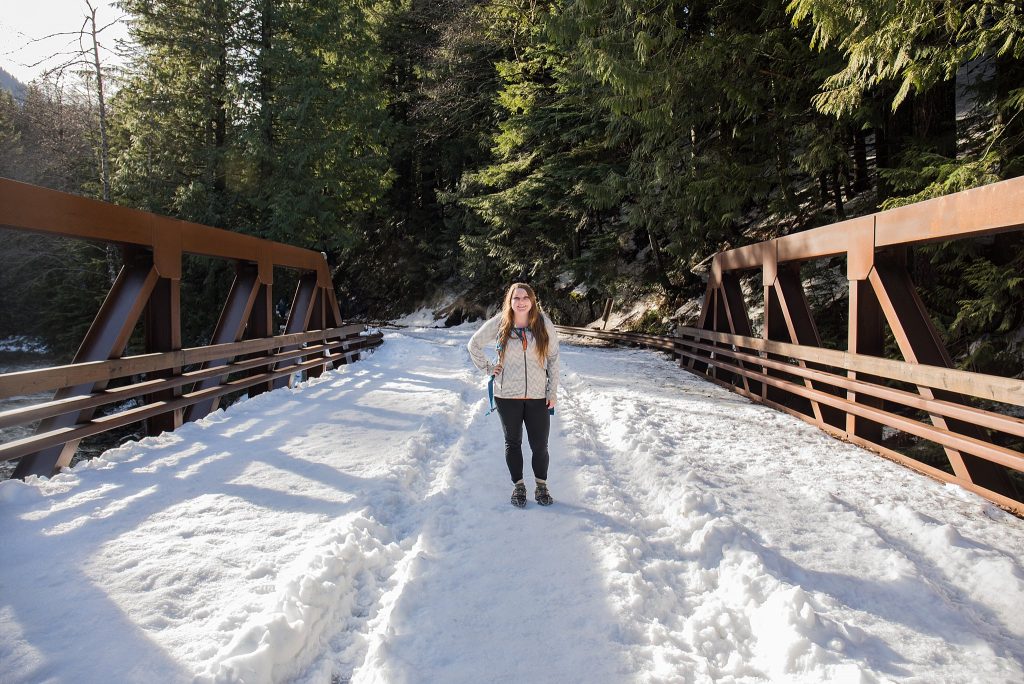 There are pit toilets at the real trailhead which is good to know in the middle of a 9 mile hike. Once on the real trail, the forest really begins. There’s a rushing river along the trail, and shortly after the beginning is the “famous red cabin,” which is a beautiful pop of red against the green forest, aqua water, and white snow. 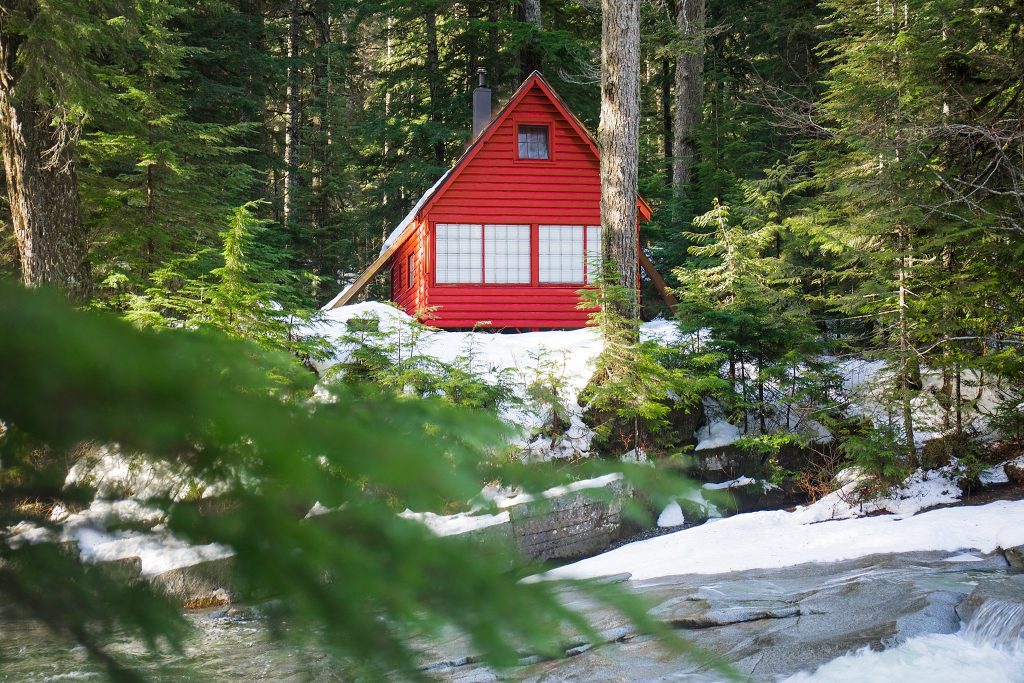 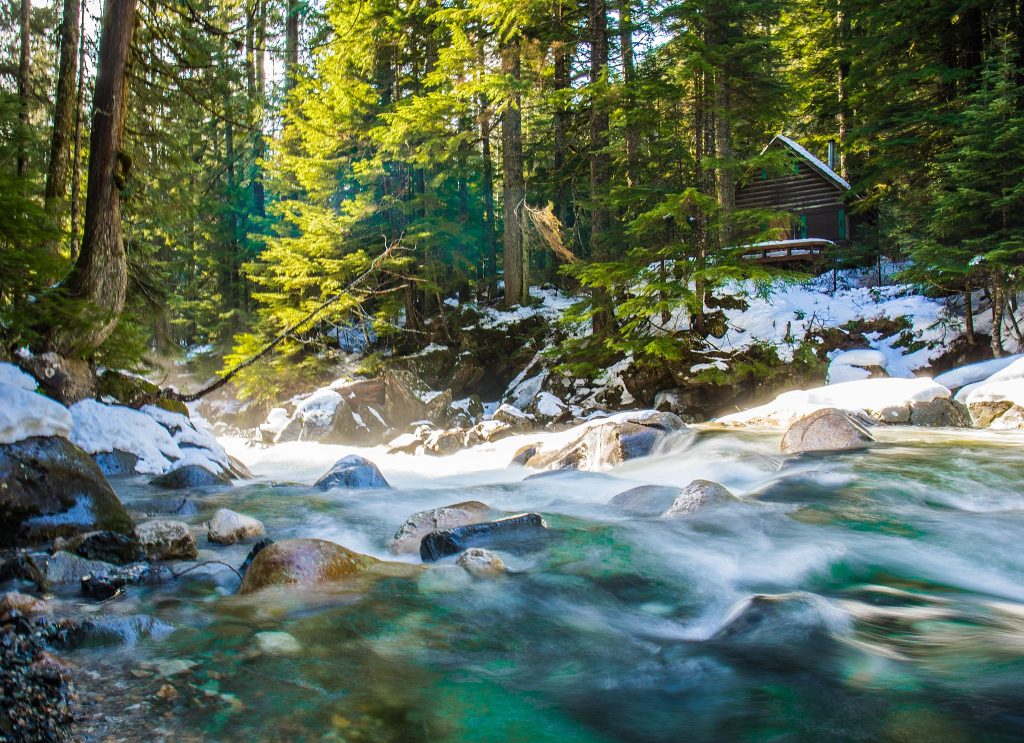 We continued hiking along the path where we caught a couple glimpses of smaller waterfalls between the trees. Brighton got a 360 camera for Christmas, and was testing it out along the way. 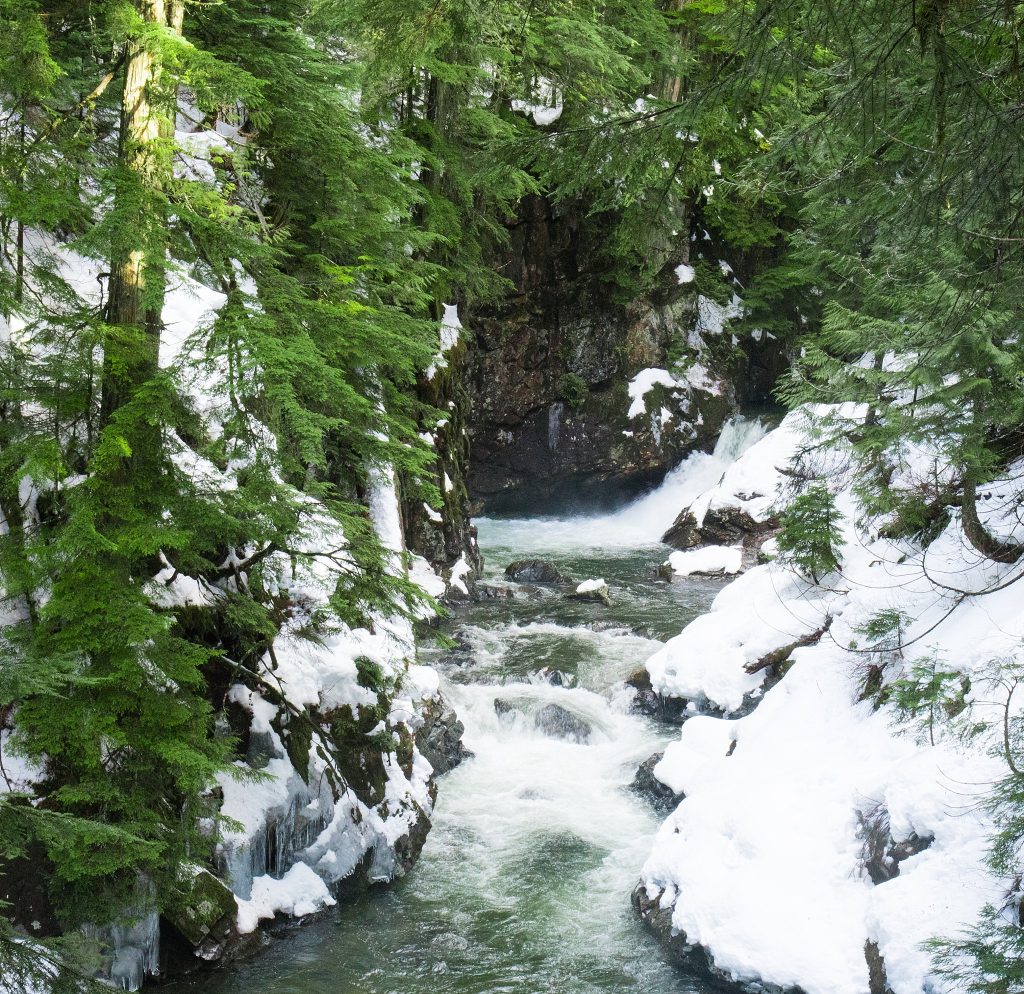 After just one mile on the trail, the trail descends down into the 135-ft falls. The mist from the falls was splashing up as we got closer, and I felt like we had encounter a small rain shower. 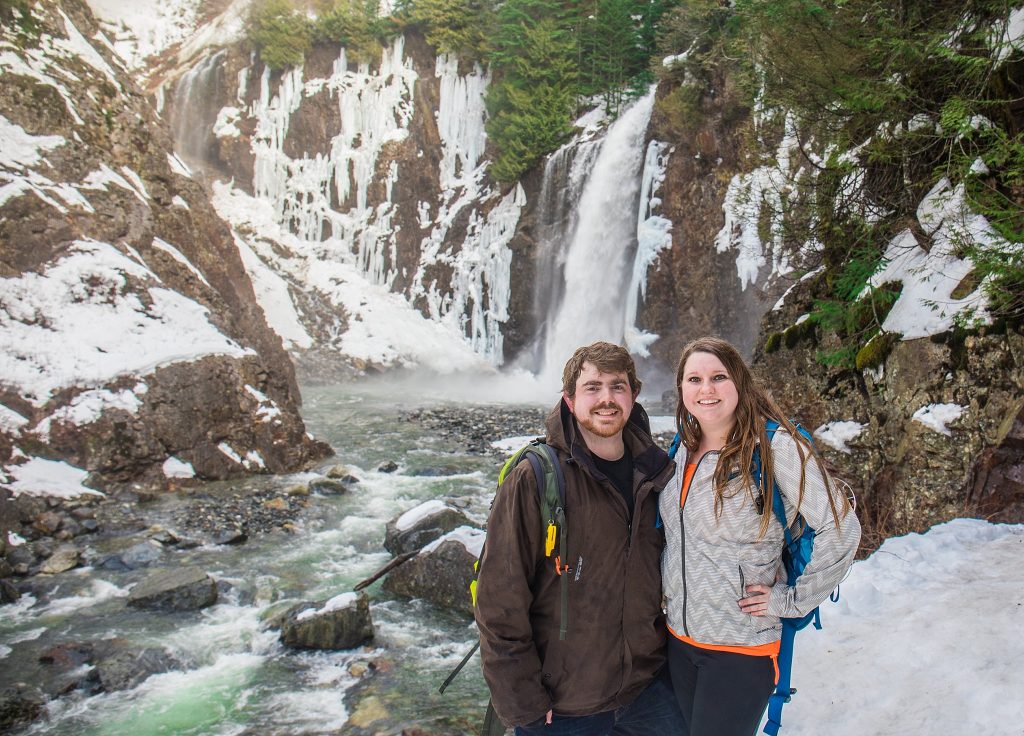 When we arrived, several people were sliding down the icy trail towards the falls and a few people almost slid into us because they didn’t have the proper gear on. At this point, I was slightly concerned for our safety due to others’ lack of safety. 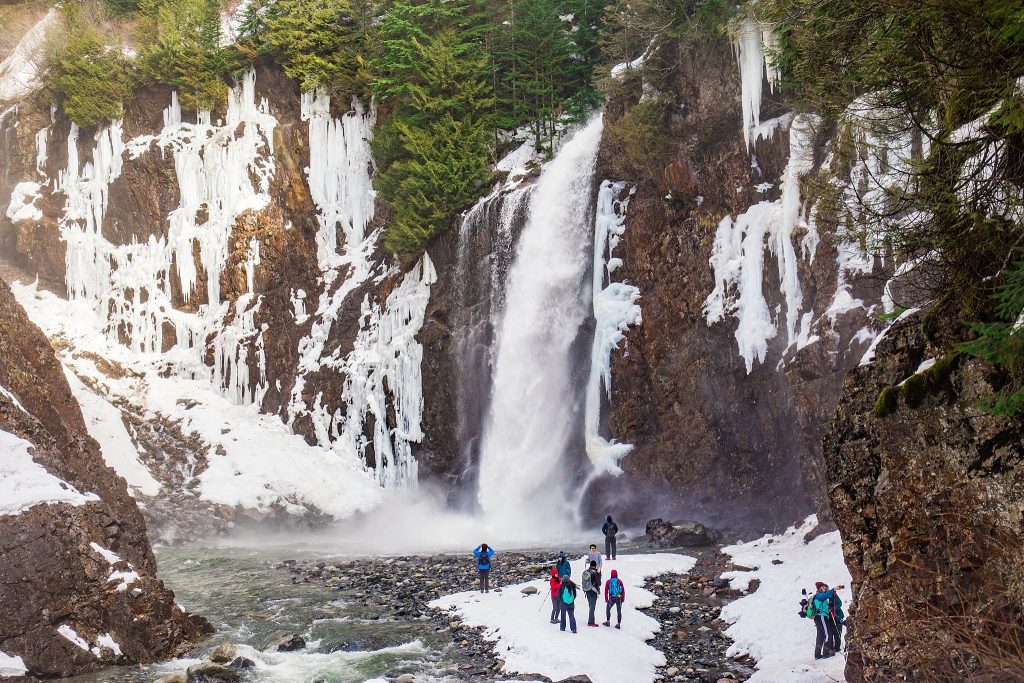 We also tried out our new drone which Brighton lost control of and crashed into a tree and fell into the ground. Luckily, even though the unit was white and blended into the snow, everything stayed close and out of the river below. We decided it’s time for more lessons in open space to figure out the best way to use the drone without crashing it or losing control. 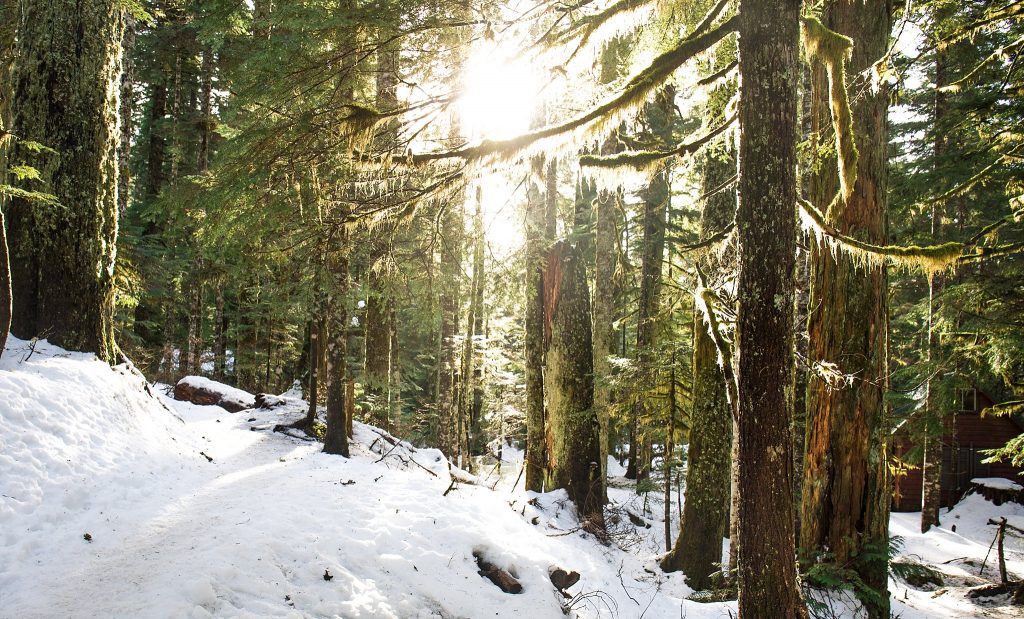 While we were at the falls playing with our cameras, there were a couple groups of crowds that came and went. Even though it’s a little touristy, the scene is great and reminds me just how different Washington hiking is compared to Utah hiking. 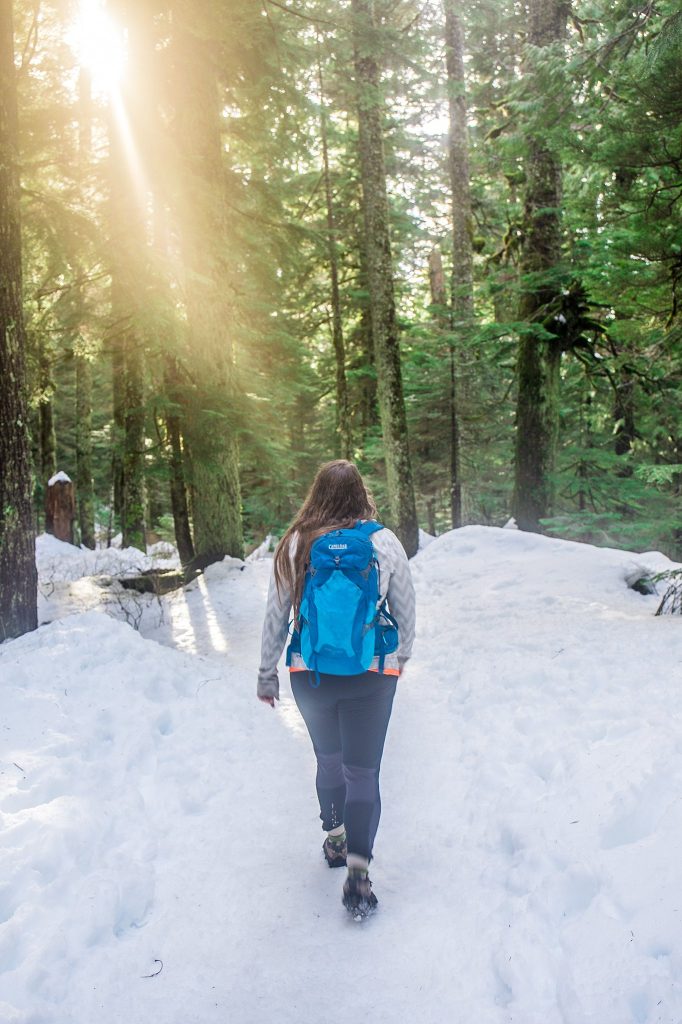 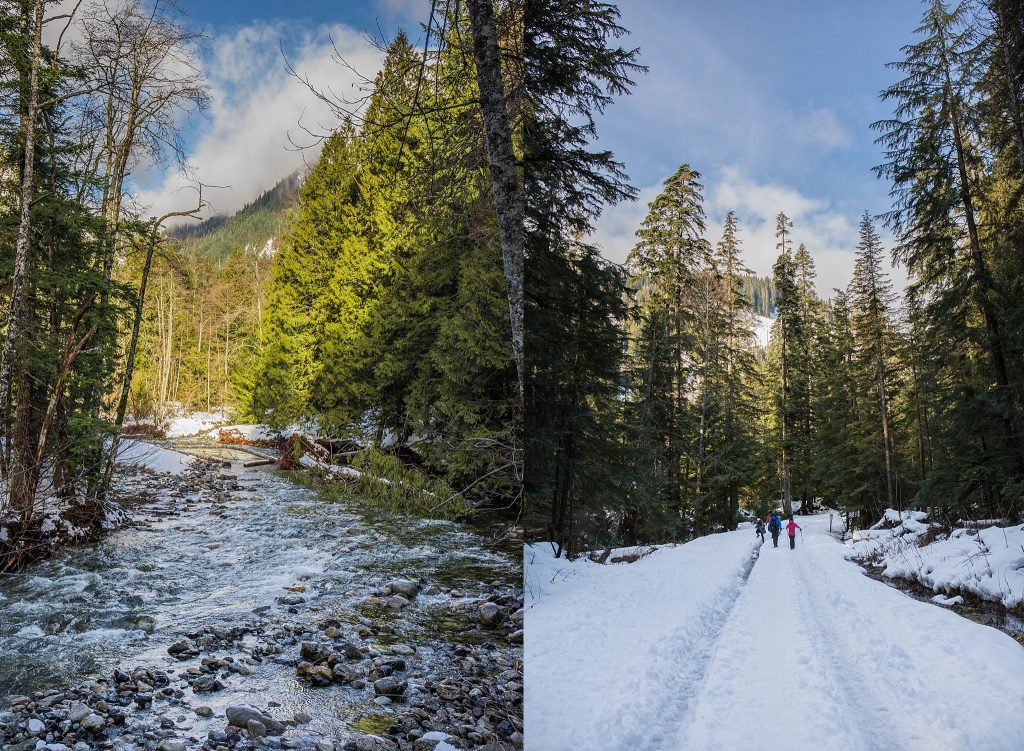 Lesson Learned: Get spikes & use them! Washington is way icier than Utah. 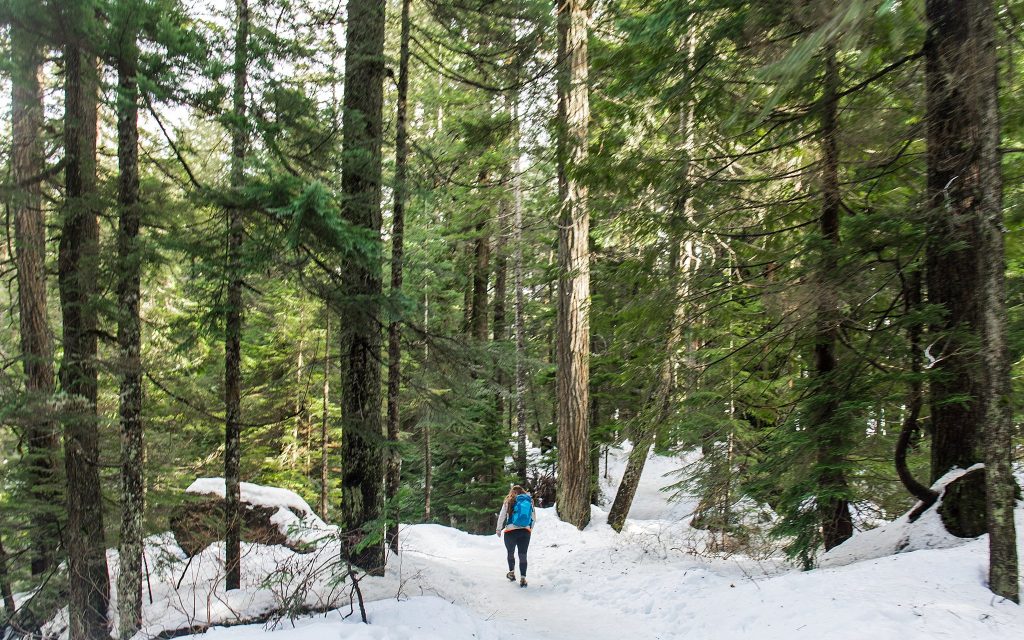 What are some other great winter hikes in the Seattle area?

Seals on the Kaikoura Peninsula