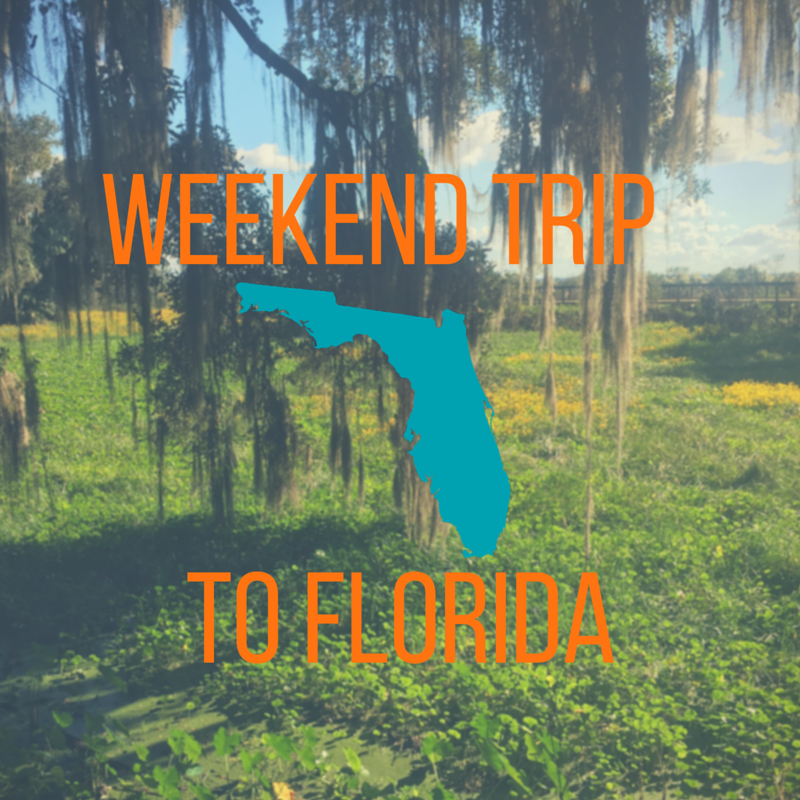 Phew! Last weekend was a whirlwind! The past couple weeks, I’ve been a bit homesick. I miss Florida, and most importantly, I miss my family and friends back home. It’s just not the same talking on the phone or texting. For my birthday, my parents decided to buy me a plane ticket home to see everyone for a weekend trip!

Originally, I was attempting to fly to Portland to see my sister, since she was going to be out there for a conference. Unfortunately, I decided that it just wasn’t going to work out with her schedule and the timing. In researching my options, I found a flight that was pretty cheap to Florida for the same time span, so after some discussion I grabbed it!

After almost a year, I was finally going back to Florida!

Two weeks later, I had my bags in hand and I was ready to go with a full schedule. I had so many people that I wanted to see and catch up with and places to go. I had to create a note on my phone/computer to keep track of everything.

I took the red eye out of SLC and arrived at 5am, Florida time. I lost two hours and I didn’t sleep at all on the plane. I really must get better at sleeping on planes.

Then, my friend Elizabeth picked me up from the Orlando Airport and drove me home to St. Pete. For those of you unfamiliar with Florida, that’s a two hour drive. I was deliriously tired, but so happy to be back in the swampland. 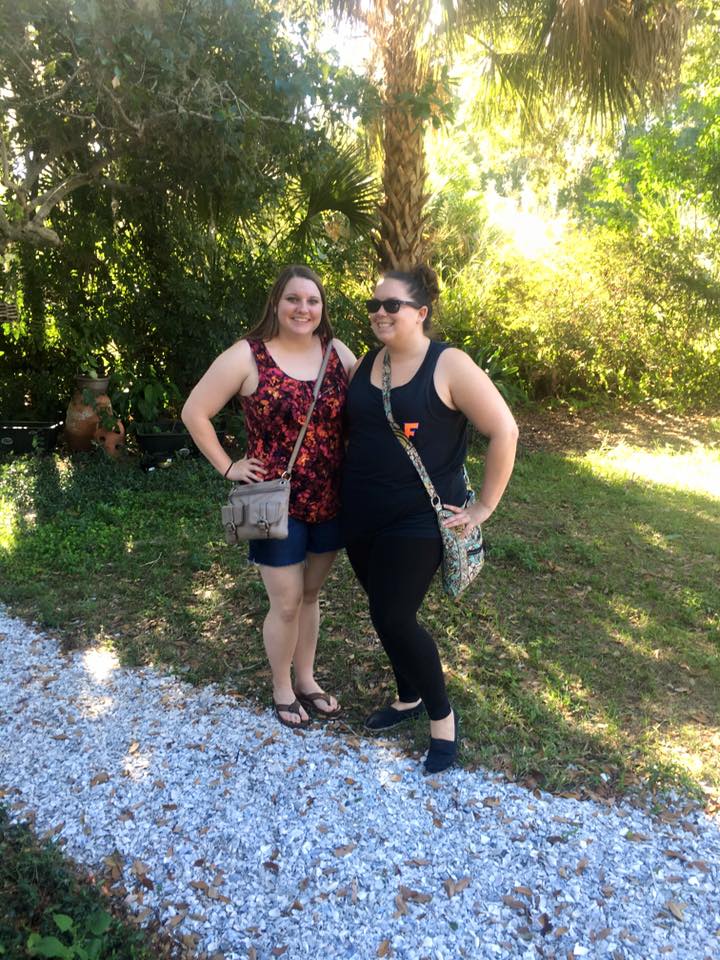 After dropping all of my stuff off at home and changing into Florida (read: warm, sticky weather) clothes, we went to breakfast at a cute little place called Proino Breakfast Club near my parents’ new house in Largo. I had a huge crepe! After breakfast, I said goodbye to Elizabeth and she drove back to Orlando.

After she left, my parents wanted to catch up. They were also kitty/dog sitting for my sister so I got attacked with doggie kisses from my sister’s dog, Sirius. 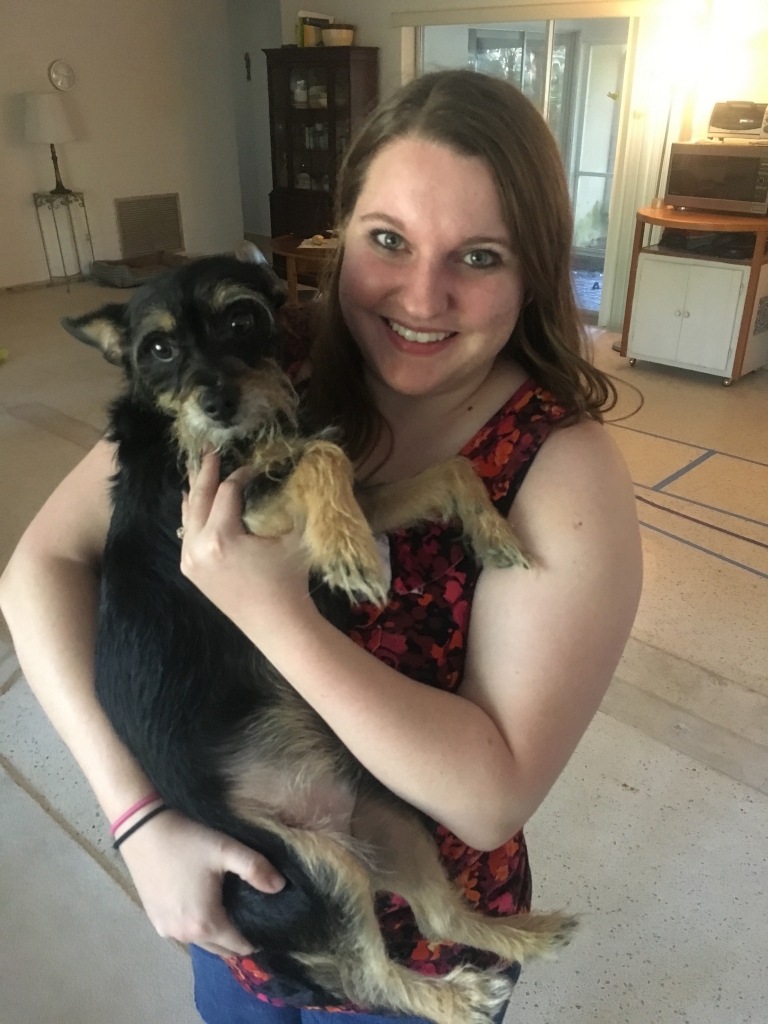 I attempted to take a nap for an hour or two after settling in. It was unsuccessful, but I decided I was running on pure adrenaline for the remainder of the trip. That tends to be my method for marathon trips! 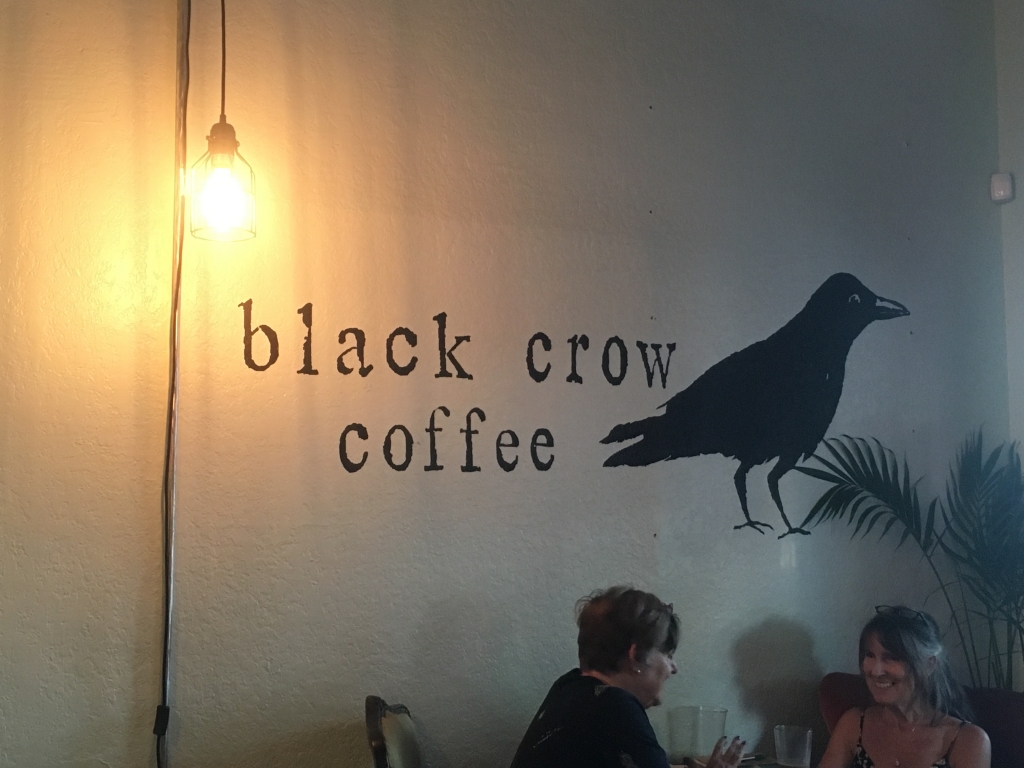 Next, I met up with another one of my bridesmaids, Courtney, for coffee in Downtown St. Pete. She is super hip, and in-the-know about what’s cool in St. Pete. We got coffee– my new obsession– at this new place in St. Pete called Black Crow Coffee. It’s in Old Northeast Neighborhood which is where I used to run cross country back in high school. Ahh, the memories… 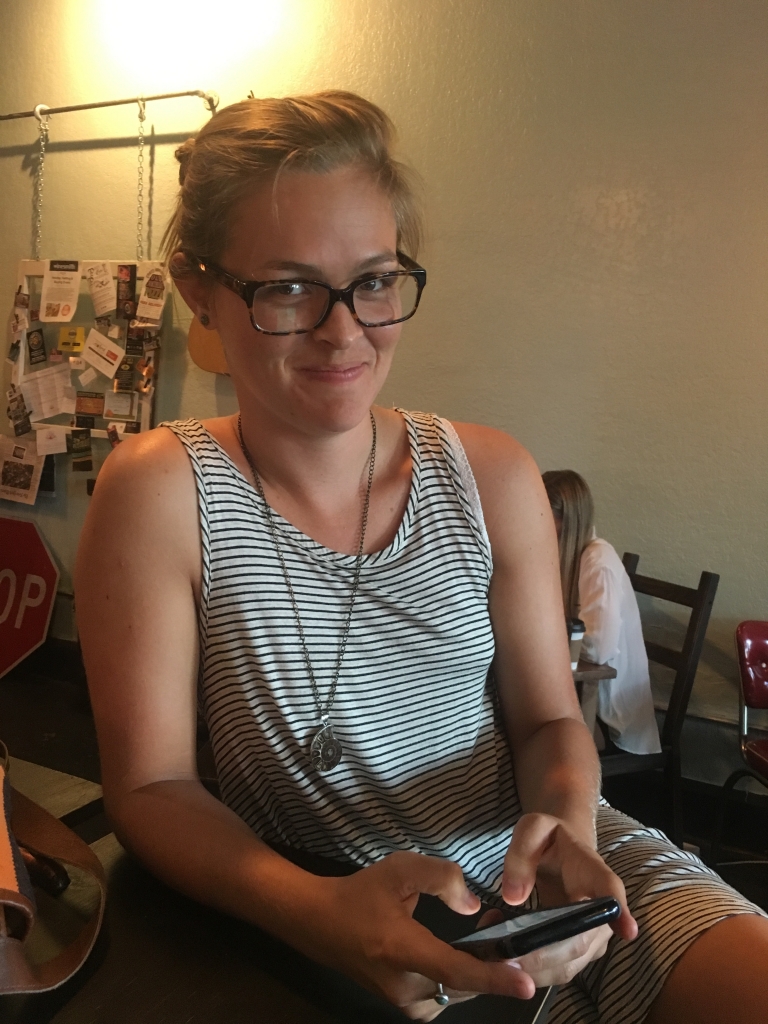 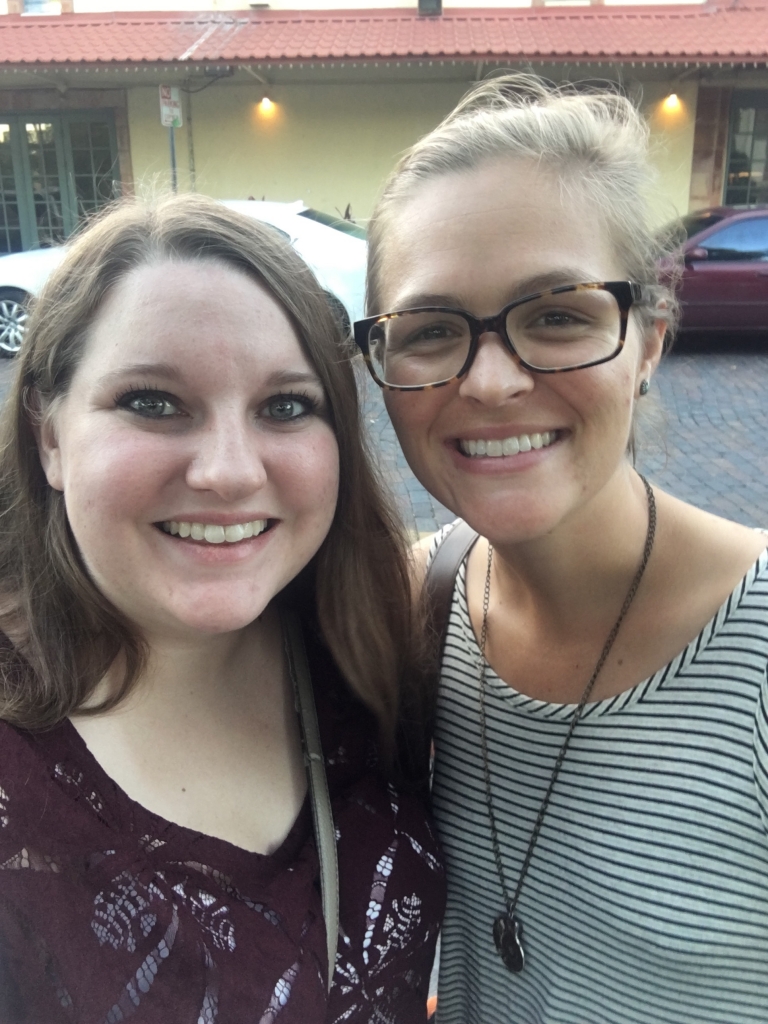 What I didn’t realize was that my parent’s house is so far from downtown St. Pete now, which was a bit of a bummer after living in the area for so long! I suppose I can’t complain too much since I don’t live there anymore.

My dad made my favorite home cooked meal of his– Salmon– YUMMM! Then I was off to Gainesville!

So it turned out that the weekend that I chose to come home was also my alma mater’s Homecoming Weekend. Essentially, it’s a city-wide holiday in Gainesville. There’s a parade down University (a major street next to campus) during the day on Friday, a big concert/festival on Friday night called Gator Growl, and then the homecoming game on Florida Field on Saturday!

But before all of that, I needed to do something…

My last couple years at UF, I frequented a dance club in Gainesville known for line dancing. I love line dancing. When I was young, I used to dance and this fulfilled my need to dance without being creepy and club-like. I learned all of the dances! Well, I wanted to get my fill of line dancing in during my time in Gainesville, so we went to Cowboys Saloon (I knew it as :08, but it’s had a name change since I’ve left). I remembered all the dances, and it was super fun! It’s not everyone’s cup of tea, but it’s really fun if you get into it!

The next day, Cody and I ate some super delicious Latin food at a local Gainesville favorite, Mi Apa! They have authentic Cuban and other Latin food there. So good! It was very crowded too. 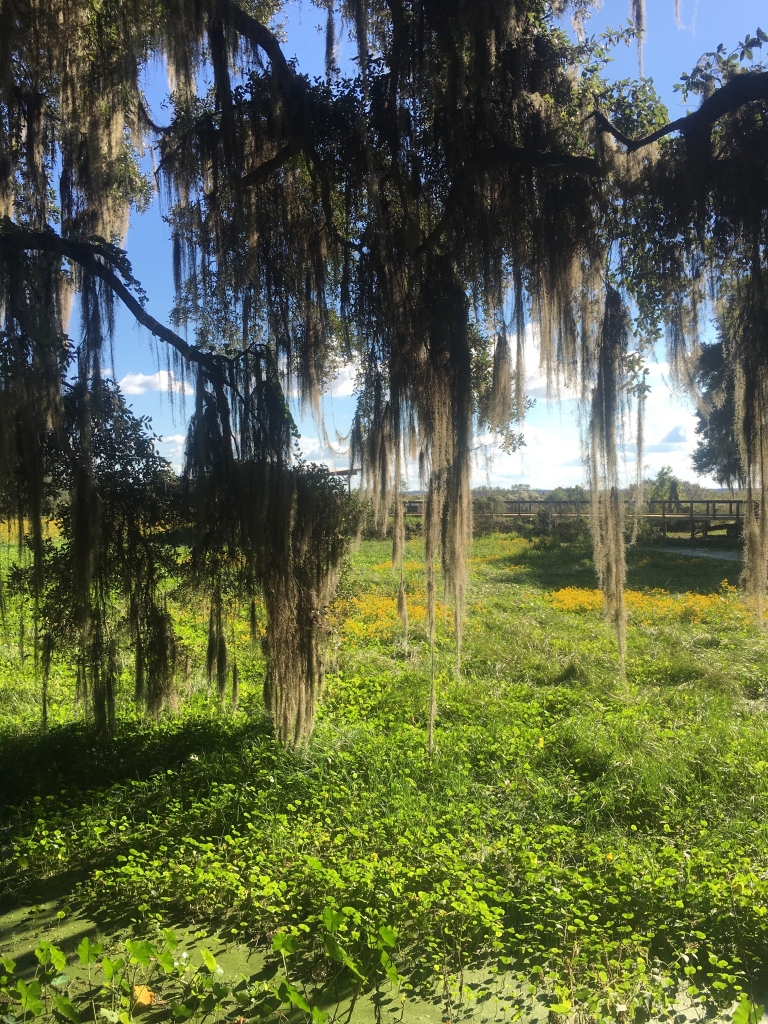 Erica suggested going out to Paynes Prairie State Park. It was one of our favorite places to run and bike when we were there. As you may know, I have a special bond with that place and even hosted a 5K race there. What would my trip be without an outdoor adventure? 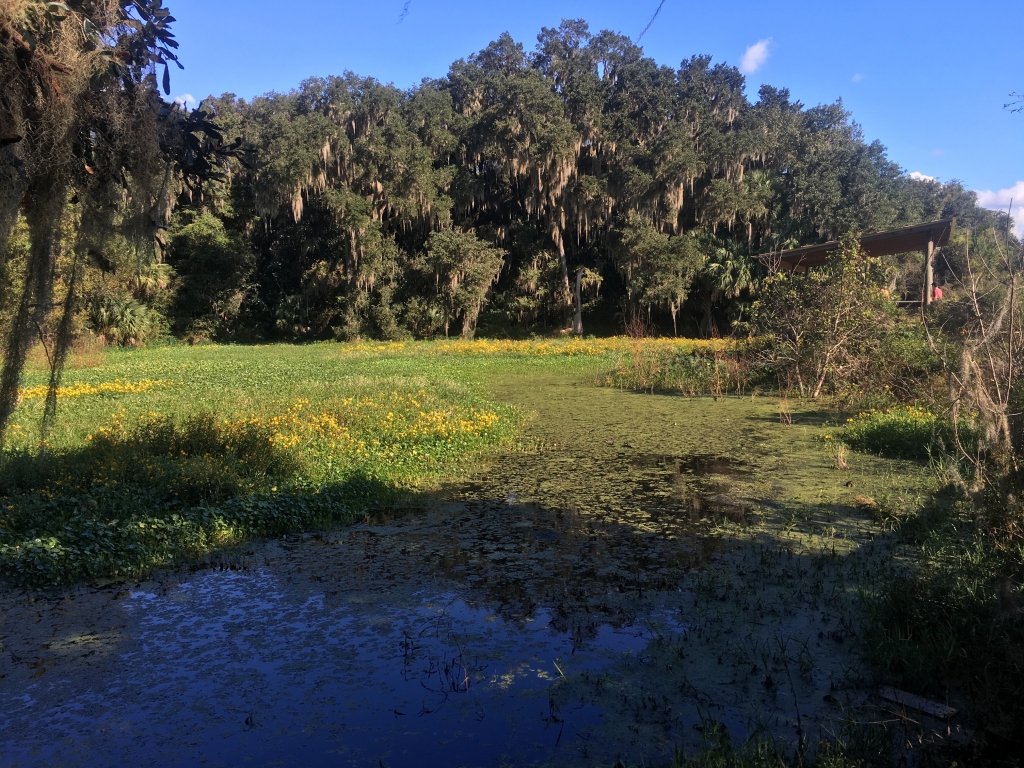 Paynes Prairie is biologically, geologically and historically unique. This park became Florida´s first state preserve in 1971 and is now designated as a National Natural Landmark. (Source)

Paynes Prairie is just so “Gainesville” to me. I’ve seen many alligators, bison, birds, and other little critters there. 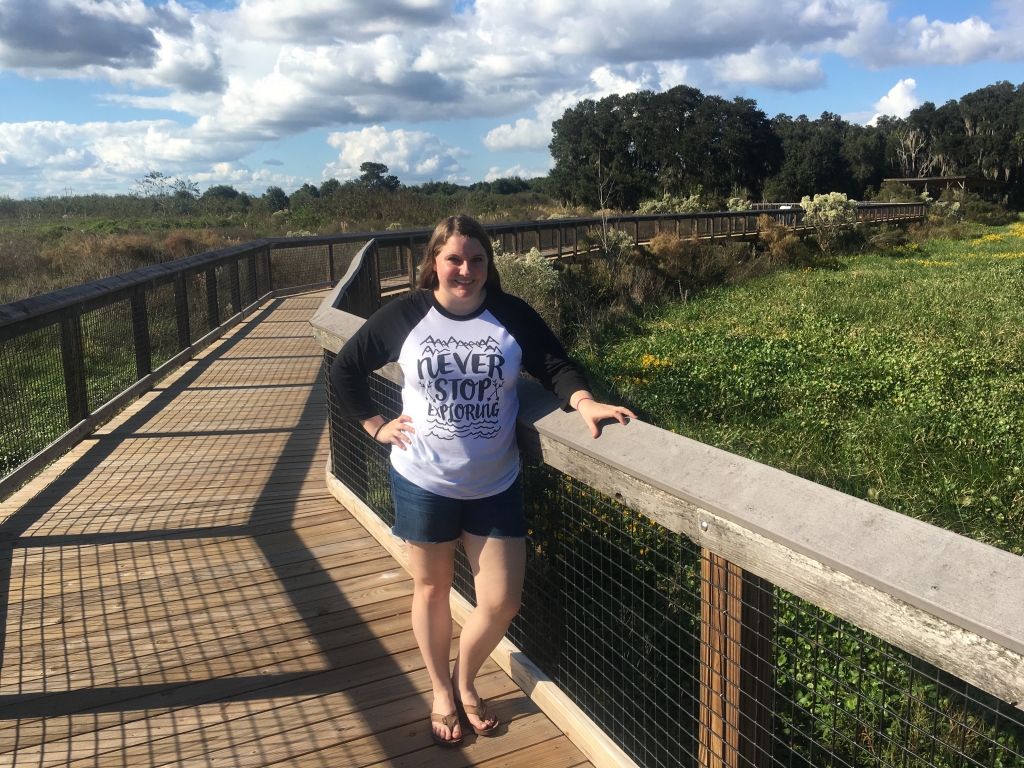 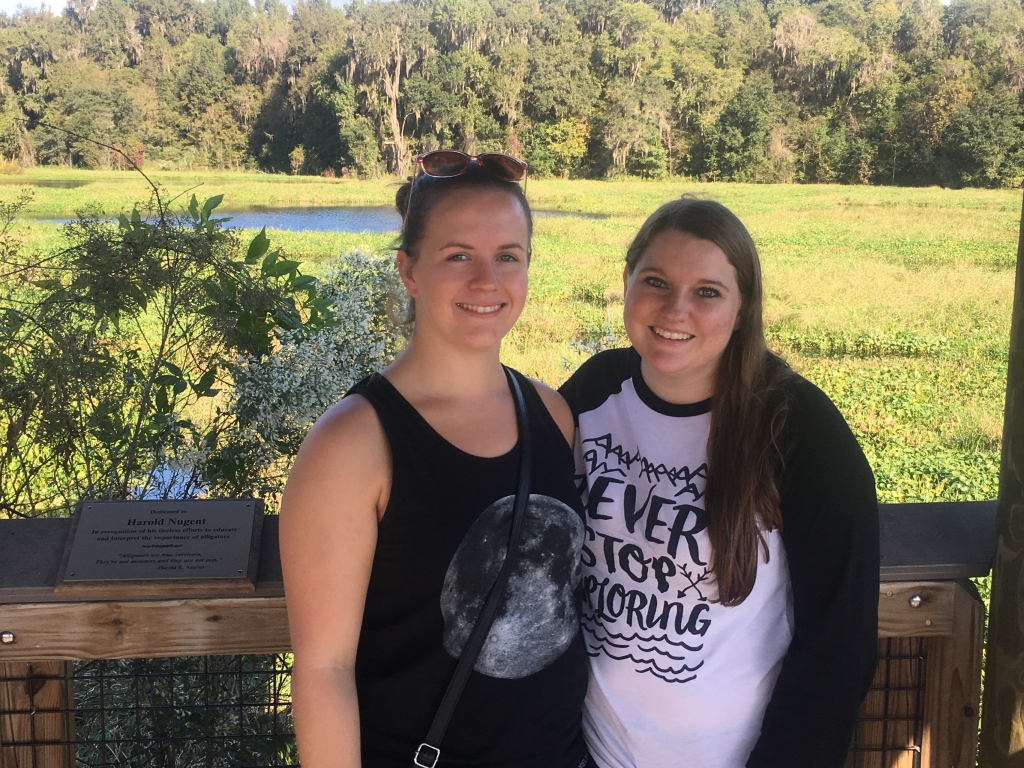 It was super humid (to me after being in such a dry climate), but it was a beautiful day and I enjoyed the surprise visit there.

We usually do the La Chua Trail, off the Hawthorne Trail. It’s about 3 miles round trip, very flat, and it goes out to a lookout station. We didn’t go all the way out there this time, but I’ve been many times with visitors who visited me in Gainesville. The trailhead looks like this. 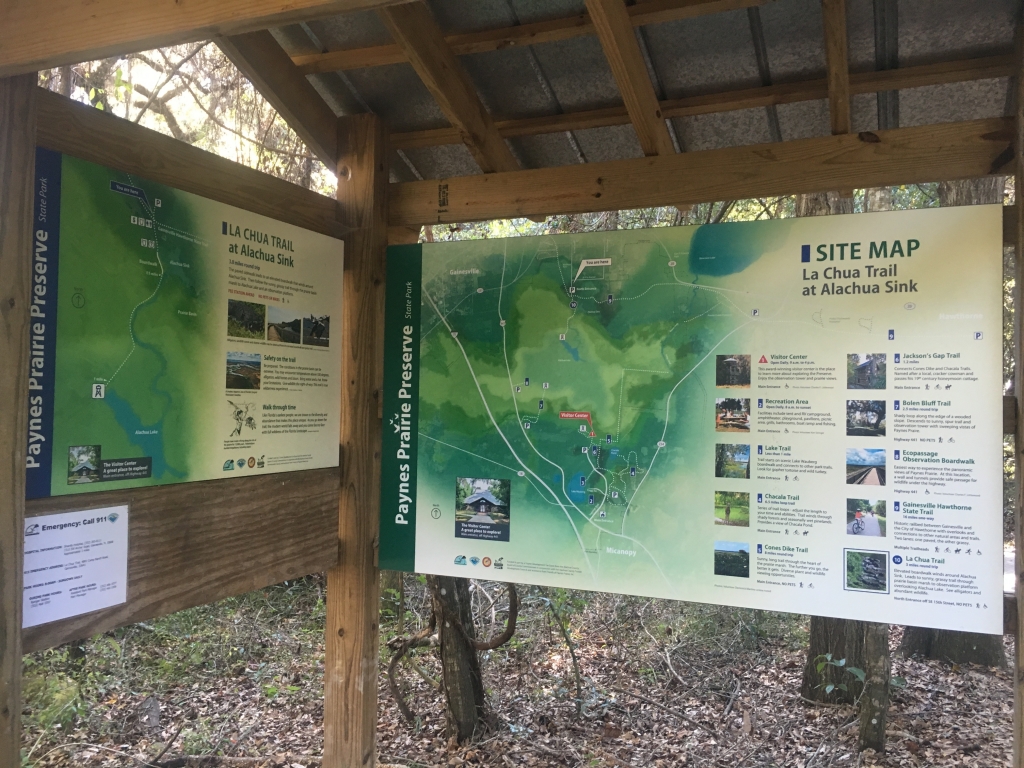 My marathon continued with another one of my favorite Gainesville restaurants, Chuy’s. This one is a chain, but there aren’t many in any of my surrounding areas. They have the best “creamy jalapeno” dip for your chips. Or anything really. It’s similar to Cafe Rio’s House dressing, but a little different. Demi and Erica wanted to go for their Margarita Happy Hour. 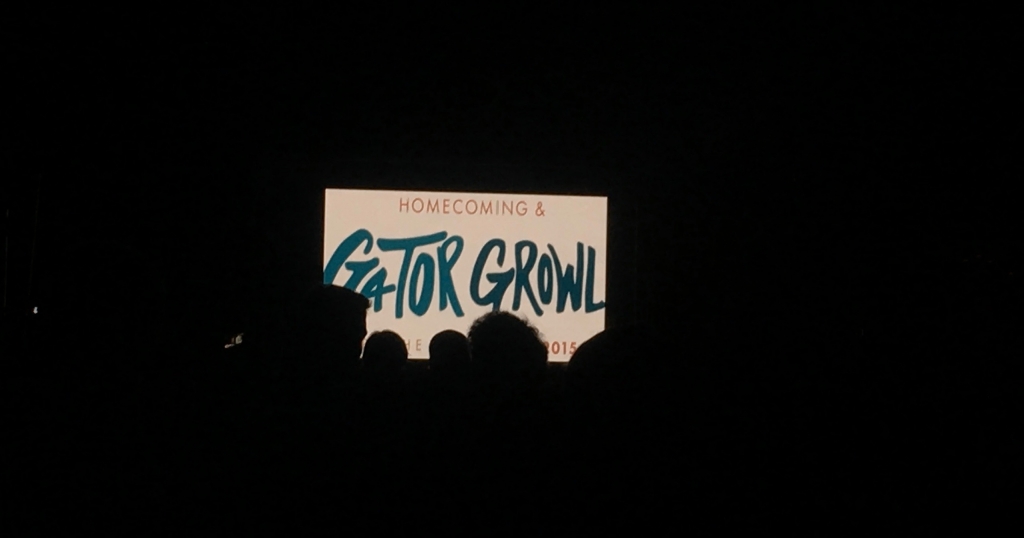 By the time we finished lunch/dinner, it was just about time for Gator Growl. This year’s musical artists were Jana Kramer (country), Echosmith (indie), and T.I. (rap/hip-hop). I had forgotten that Gator Growl has a bunch of lame “let’s congratulate the sports teams” in the middle of the acts. It’s just not very entertaining for the crowd, in my opinion. Jana Kramer and Echosmith were both pretty good, but we didn’t really have the patience to wait for T.I. since we were getting eaten alive by ants and didn’t want to endure any more lame sports announcements.

After the show, I tweeted to Echosmith because I really enjoyed their set. They liked it back! I was super excited. Don’t judge me for fan-girling! After we left Gator Growl, we walked around campus at night and I reminisced. Then we went out to Midtown to pretend like we were college students again. It was weird, even after only two years. Everyone seemed younger! 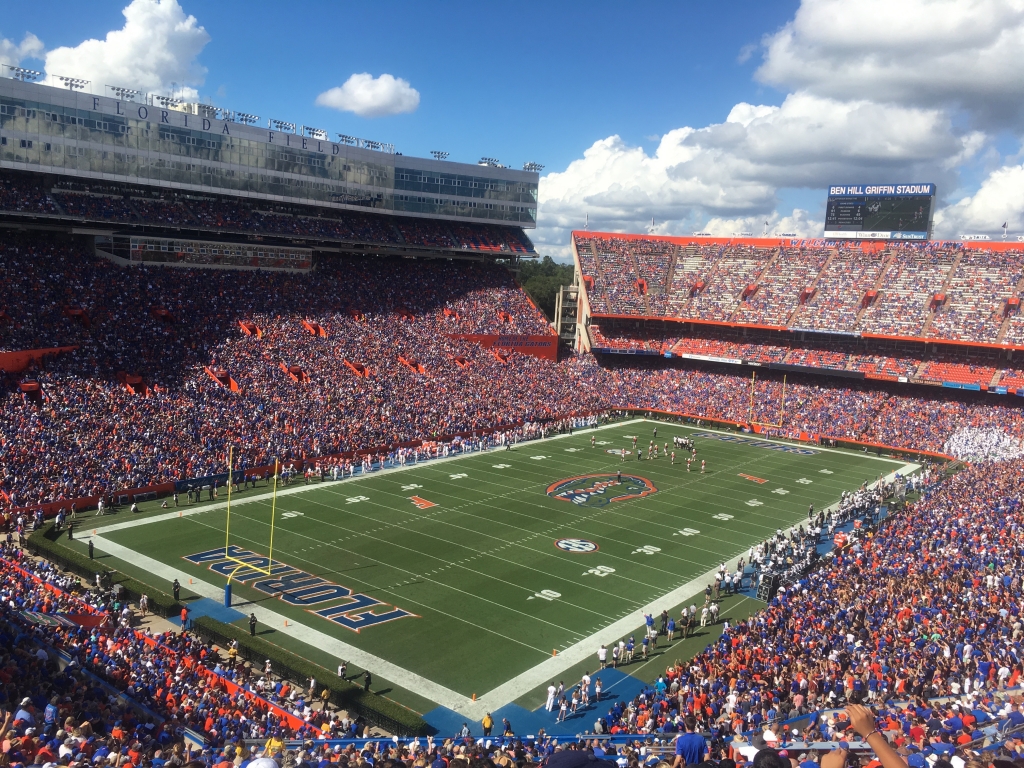 On Saturday, my last day in Florida, my friends and I went to the homecoming game at Florida Field to watch Vanderbilt almost beat us. I had forgotten just how brutal that sun can be in the stadium! Next time, we will sit on the alumni side… next time! The energy of the student section is really unique though. 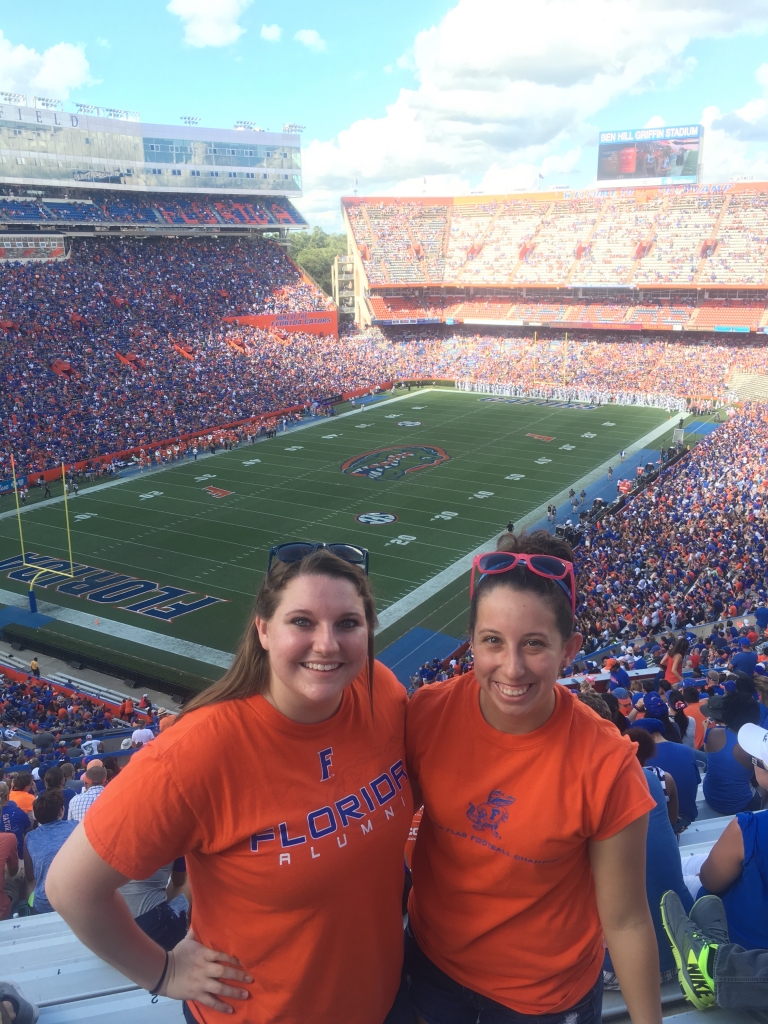 Demi and I at the Homecoming Game 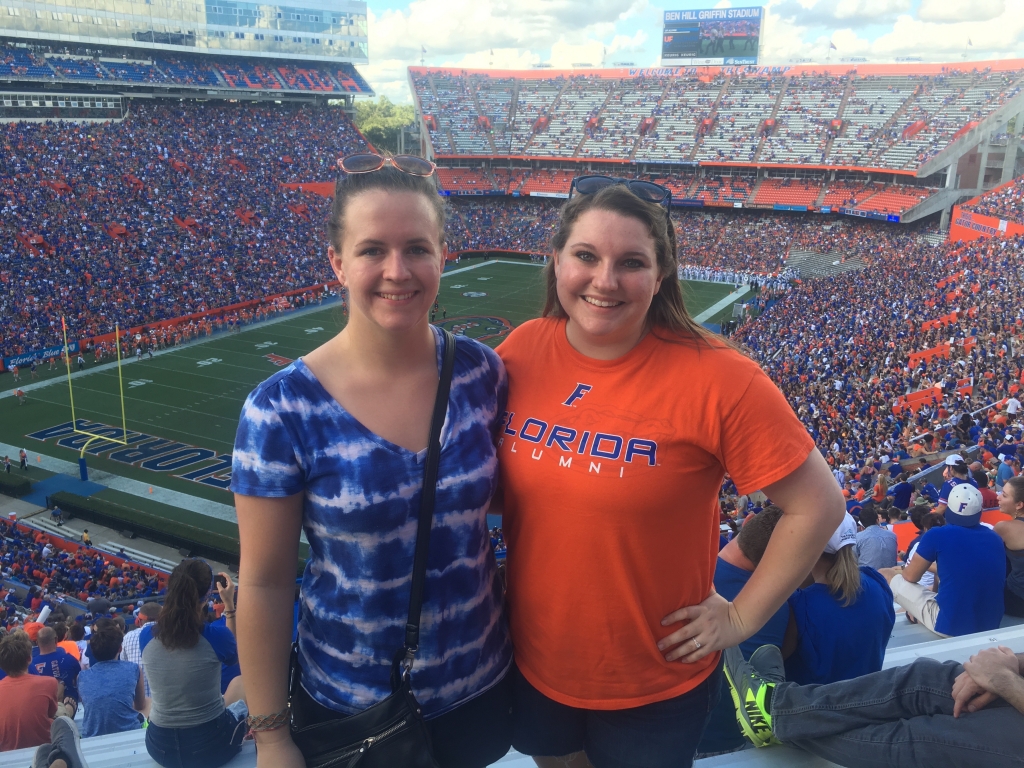 Erica and I at the Homecoming Game 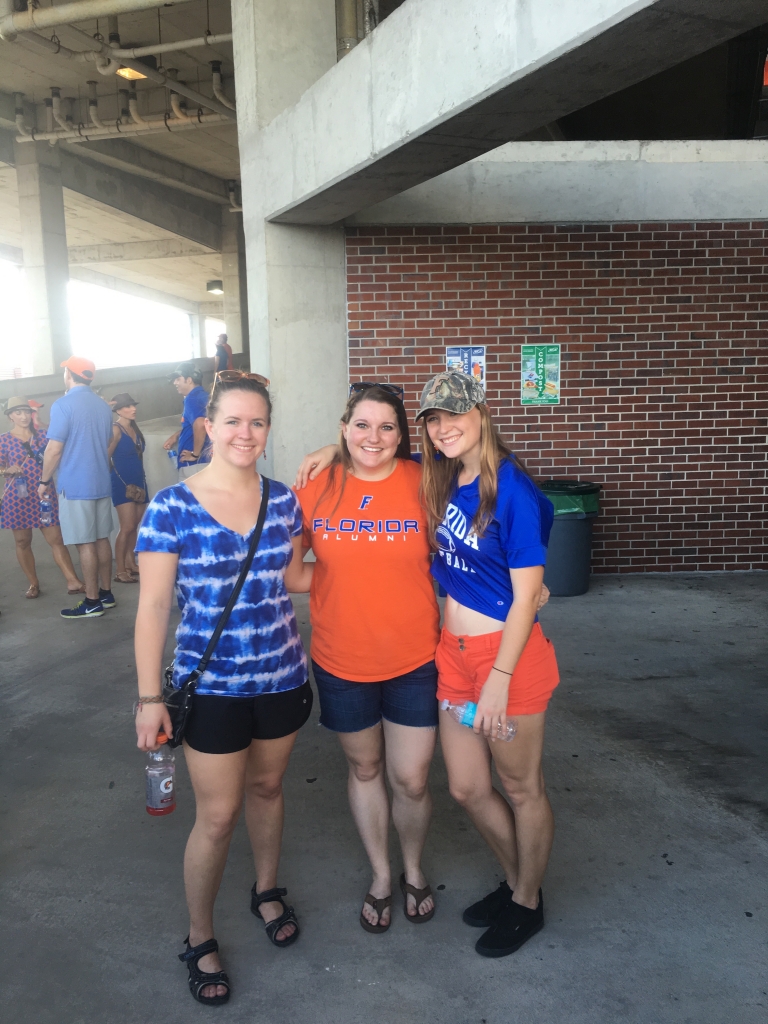 Erica and I also got to meet up with our old roommate from sophomore year, Catie!

After the game was over, I made my last stop for food in Gainesville– Bento! I love their Volcano Roll and Thai Tea with Boba! Sooo good. 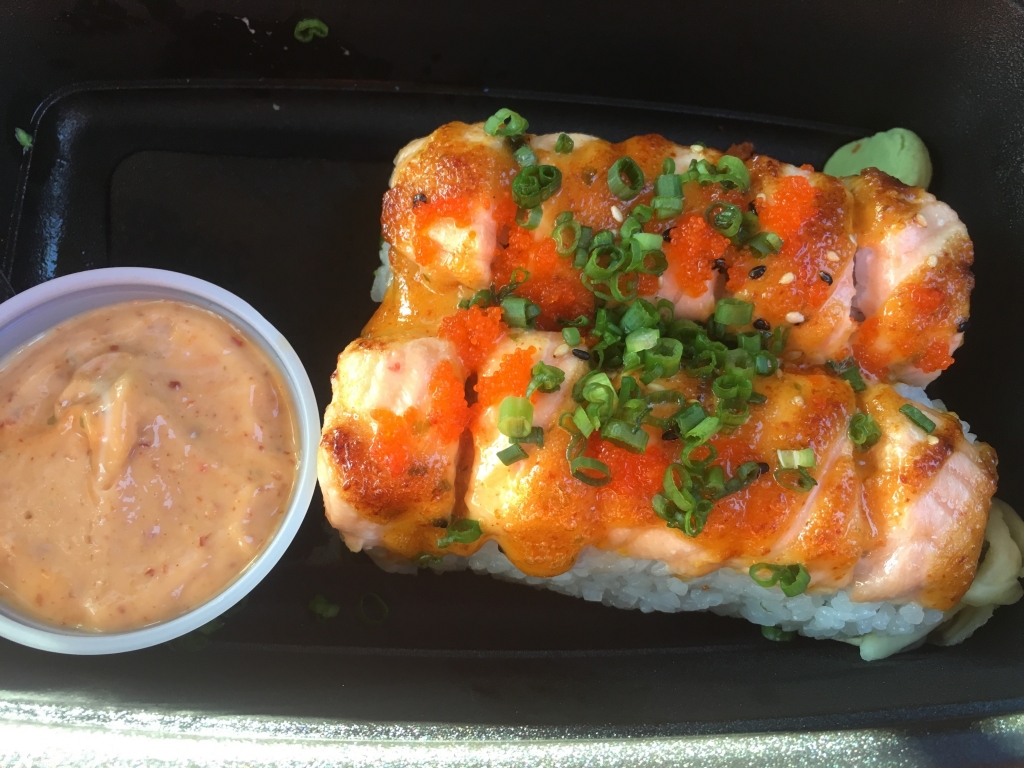 Normally, they dress up the plate and everything but I got it to-go so it wasn’t super fancy.

Finally back in St. Pete, Erica and I met up with Wannee for dinner at Red Mesa Cantina in Downtown. This place has the best shrimp al mojo dish! No pictures, but if you’re ever in the area, check it out. 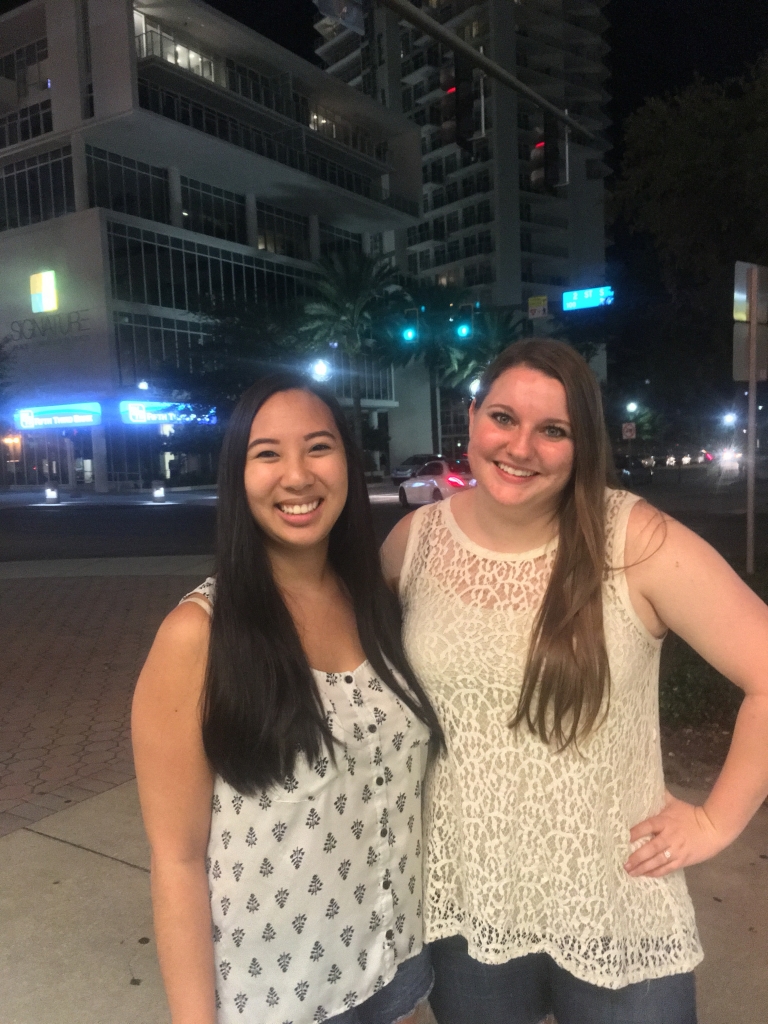 After dinner, my parents whisked me away back to the Largo house so we could get up at 2:30am for my 6:00am flight out of Orlando. 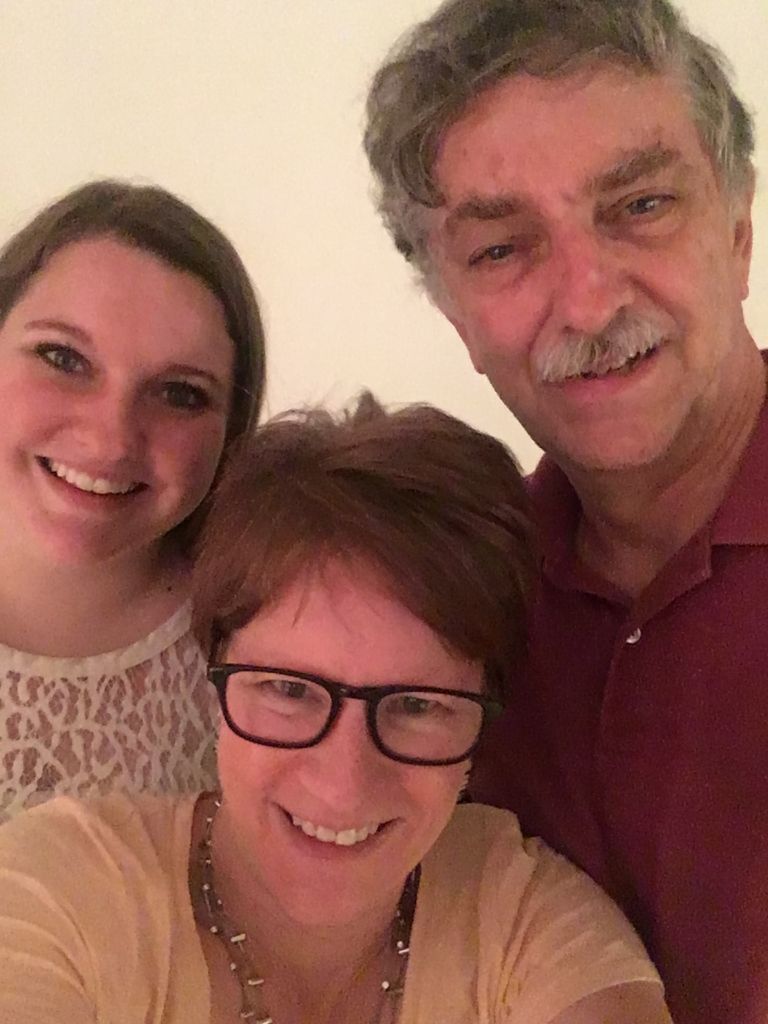 Coming home makes me realize that even though I am super far away from everyone, I still have a loving support system to come home to when I need it. I just wish plane tickets were cheaper! My parents have been supportive of my move to Salt Lake, and I miss them dearly. At least I will see them again soon for the holidays, and this time, I will see my sister, best friend and maid of honor, Katie! 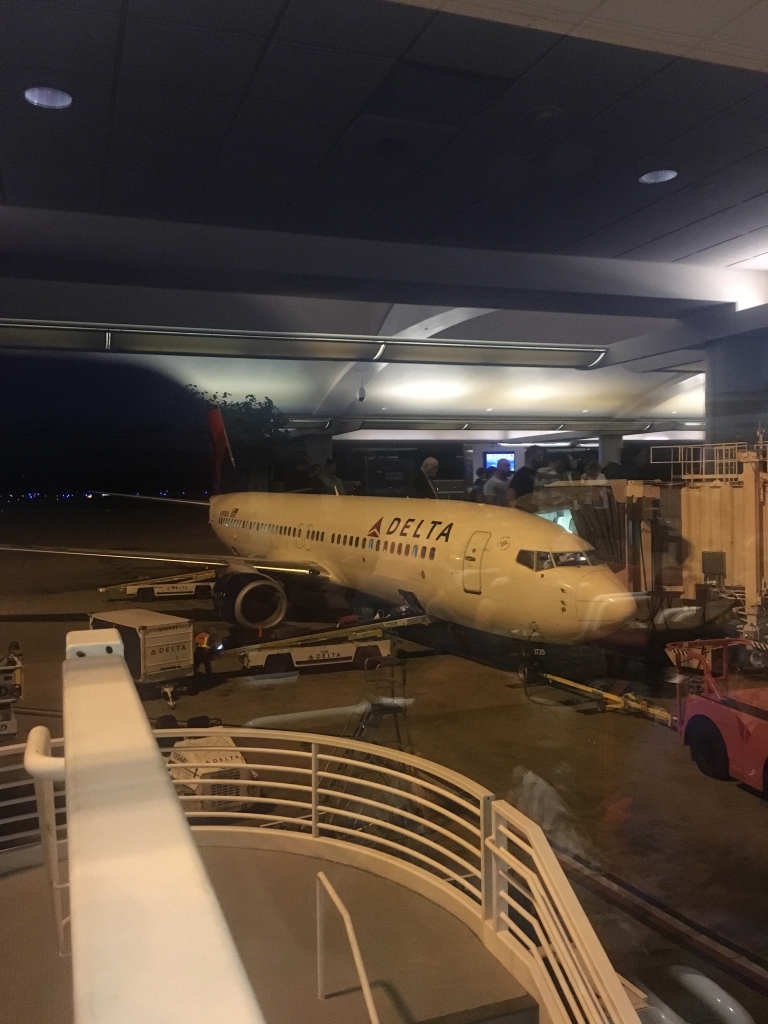 Adios, Florida– See you in December!

Do you live far from your family? How do you cope with the long distance?