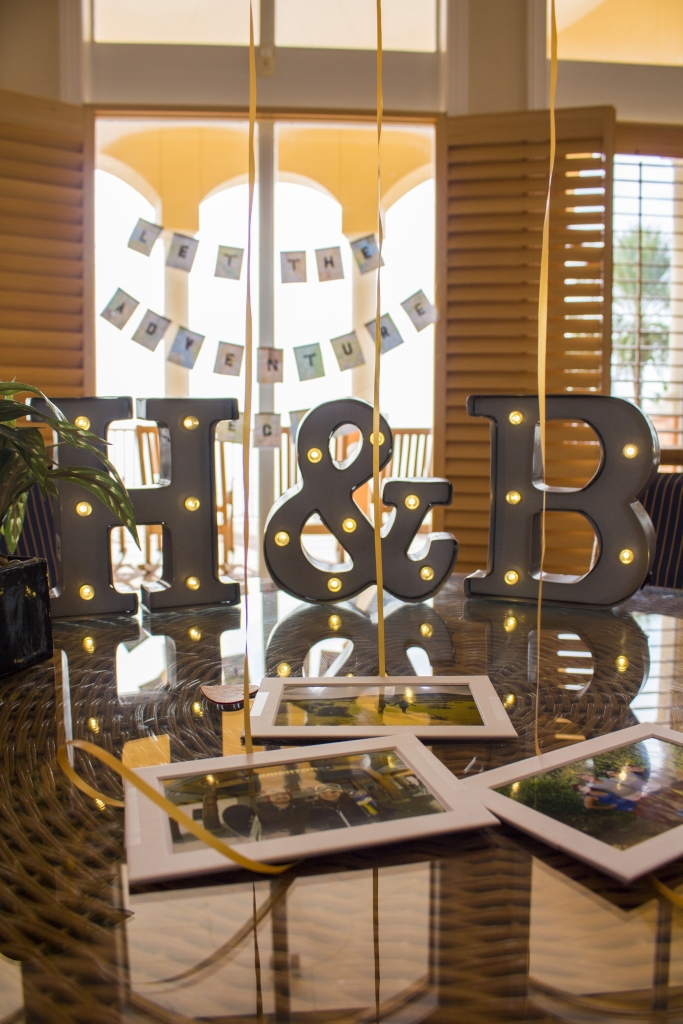 For my bridal shower, my mom and sister Katie (A.K.A my Maid of Honor) hosted a travel themed party since traveling and adventure are my passions, and what brought Brighton and I together. It was hosted at one of my bridesmaids’ beach condo clubhouse. 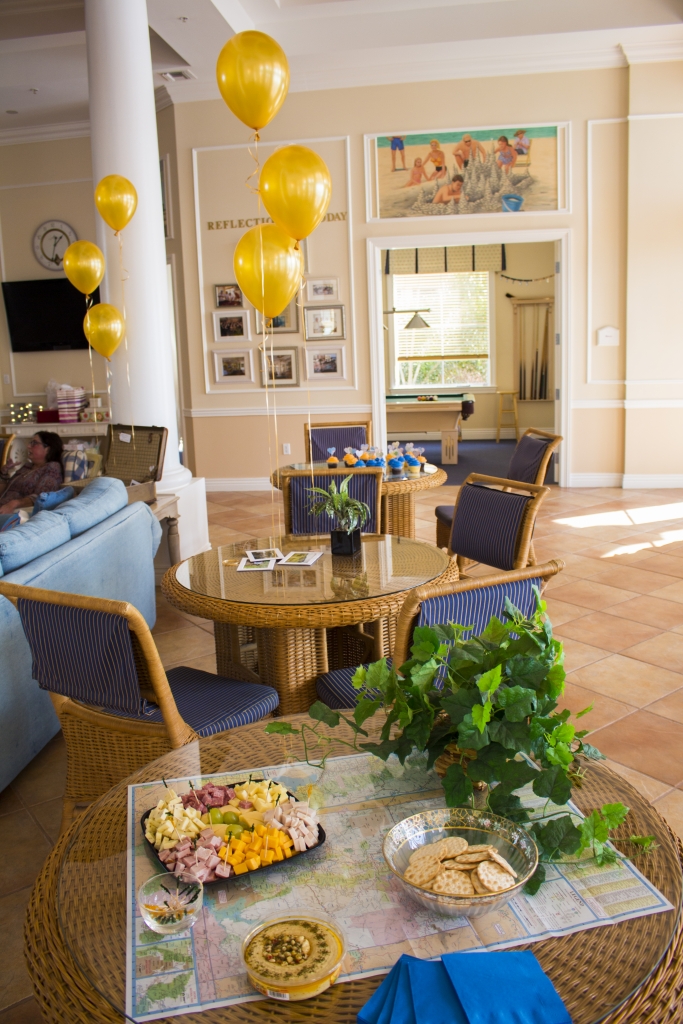 To be completely honest, I had no idea what to expect for a bridal shower. I’ve been to a whopping one semi-untraditional bridal shower since I don’t have many married friends. 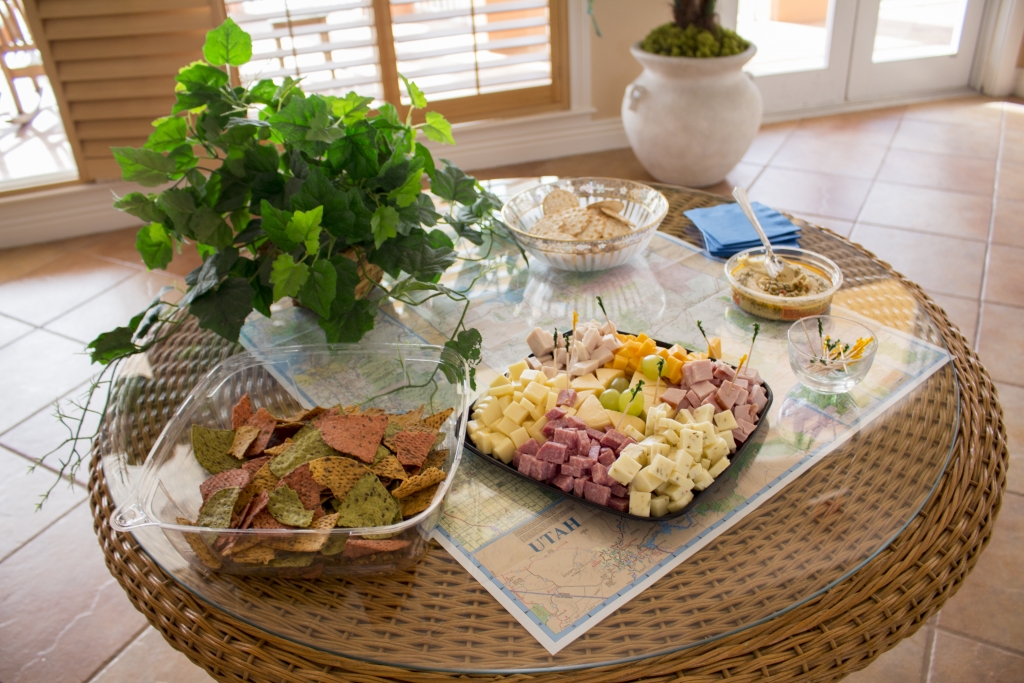 The morning started with mimosas and light snacks. After everyone introduced themselves, we played a round of Heads Up! If you haven’t played before, it’s basically catchphrase on your phone via an app that Ellen DeGeneres created. My sister discovered there’s an option to create your own deck of words and phrases, so she did a Hilary & Brighton/Wedding Themed deck. She included traditional wedding ceremony words, the titles of the wedding party such as “bridesmaids” “maid of honor” “best man”, and wedding-related words like “bachelorette party” “rehearsal dinner.” She also threw in important timeline events from Brighton and I’s history like where and when we met, and where we’ve traveled. 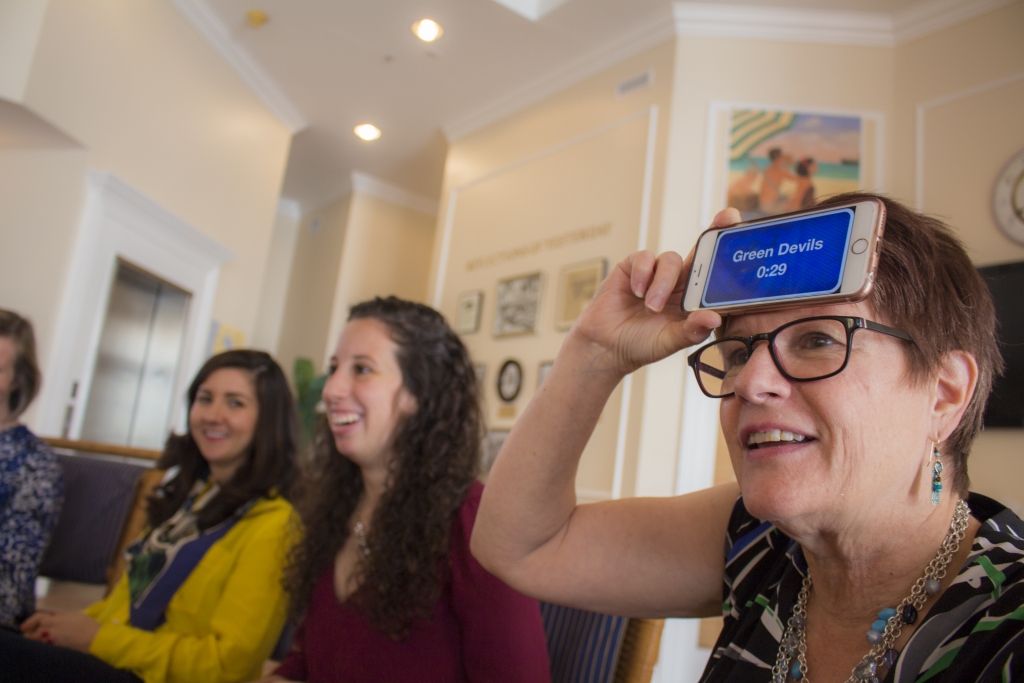 Needless to say, it was a hit! Everyone got involved and it definitely broke the ice for the party.

This part was especially fun because it got the entire group involved. I had a good mix of my aunts, my cousin, my high school and college friends, and other adult women friends that I’ve met along the journey of my life so far. I loved seeing everyone come together from different walks of my life to support me. It was a great feeling and probably unlike any other experience I’ll have in my life.

I am also photo-obsessed, so we created polaroid frames made out of foam-core board, and Courtney wrote travel/adventure inspirations for us to take photos with in front of a map. 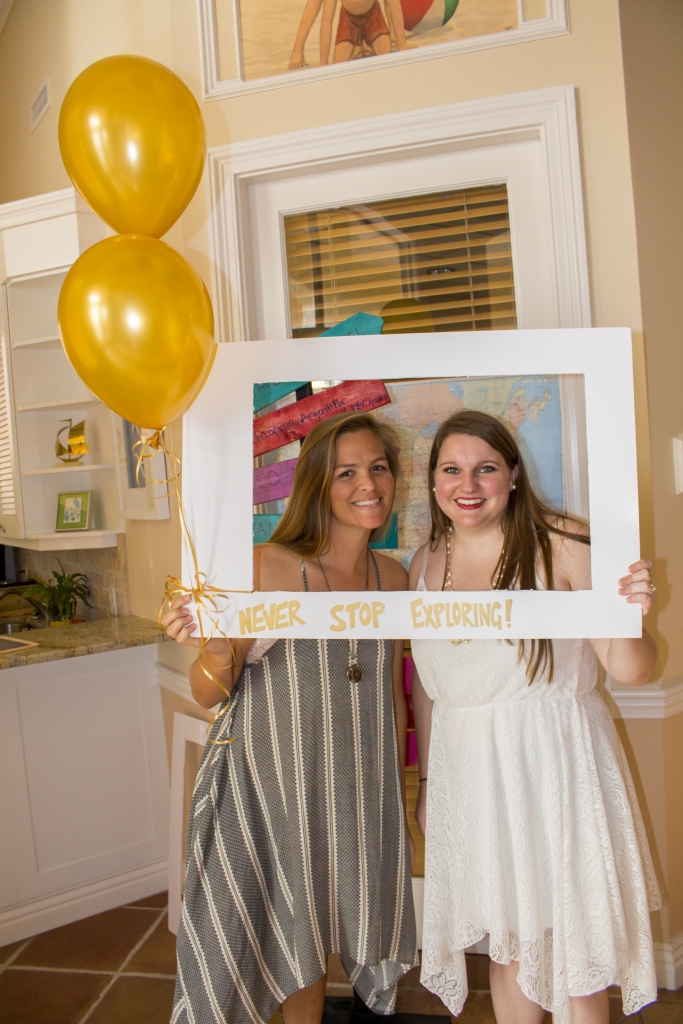 Going along with the travel theme, my dad created a sign pointing in different directions of places that Brighton and I have either lived in, been to, or would like to travel to. We think we may reuse the sign pole and revamp it for the wedding décor. 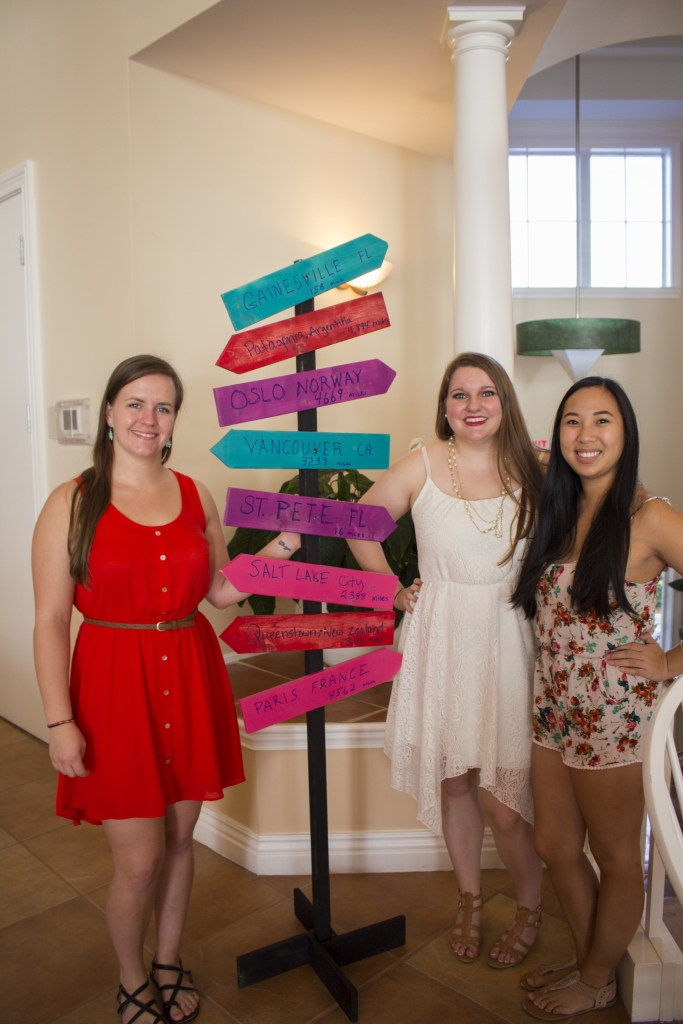 Maps were used in various places. My sister got these cute little map boxes that were tied with twine (!!) to go along with my rustic wedding theme, and put luggage tags in them as party favors. 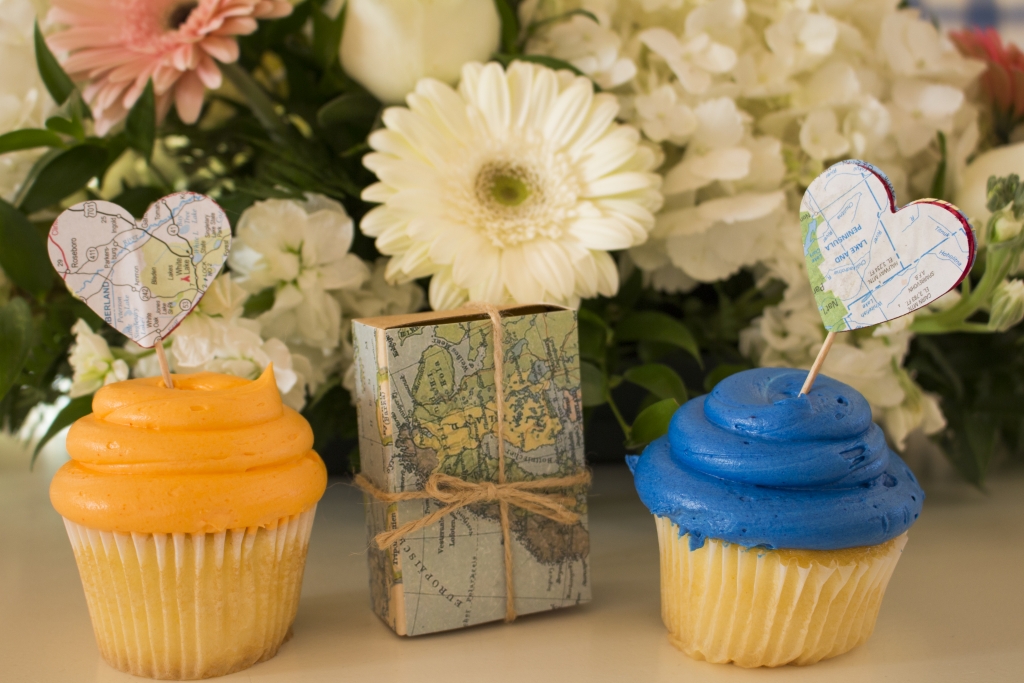 My cupcakes were orange and blue (Go Gators! I didn’t even realize I had chosen these colors until that day) with cute little map hearts as toppers. We just used a punch to cut a heart out of thick scrapbook paper, and then punched hearts out of maps and glued them together with a toothpick as the stem.

As for games, my sister also did a “Where in the world did Hilary go?” slideshow, with a sheet for people to write down their guesses while watching the slideshow of photos. Unfortunately, there wasn’t time for that game and we didn’t get to play. I’d like to think it’s because everyone was having so much fun with everything else we had planned. 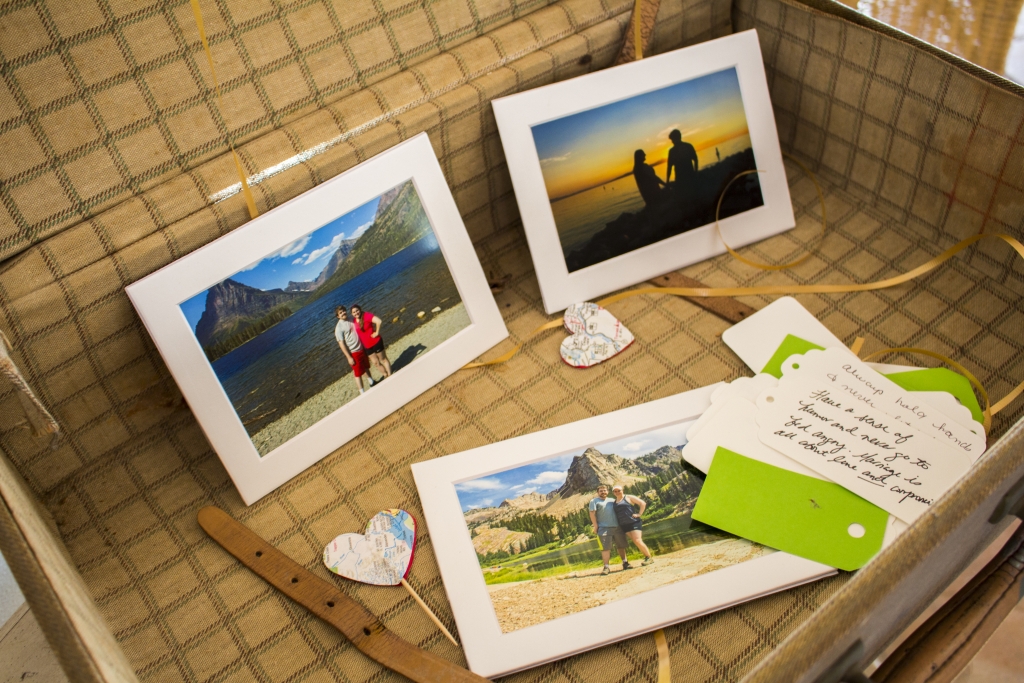 There were also “stations” for the guests to write “Directions for a Happy Marriage” and “Bucket List Items for Hilary & Brighton” at their leisure. I am waiting until I am home to read them, but I’m excited to see what people wrote. 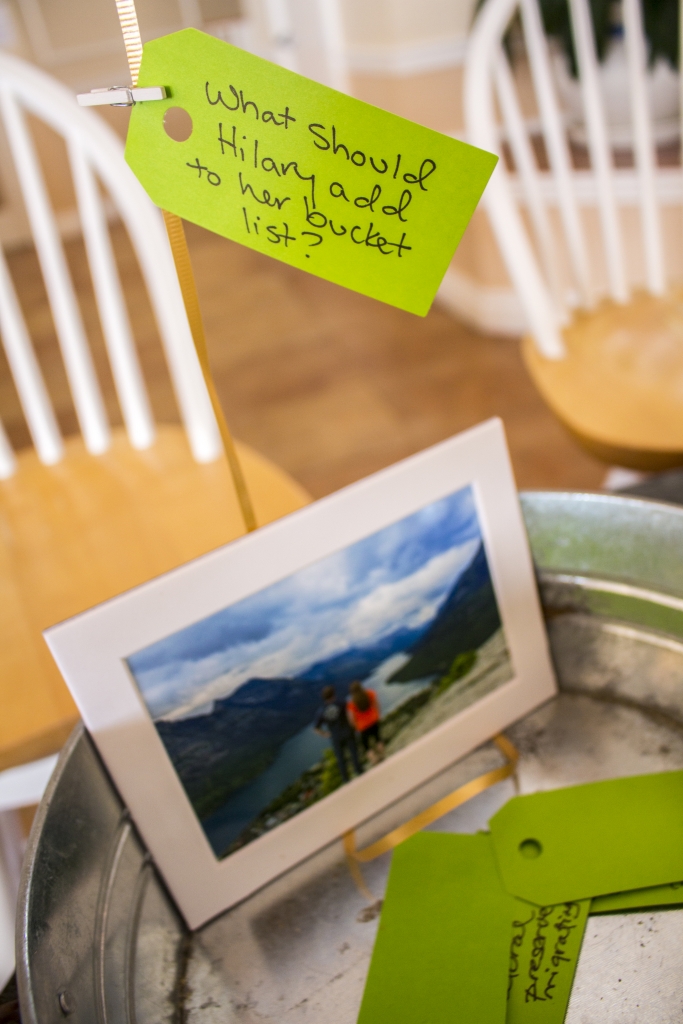 The portion of the party I was most anxious about were the gifts. I am notoriously bad at receiving gifts (and giving a satisfying reaction). Often, I don’t show enough enthusiasm for gifts I like. I won’t lie, I practiced with my family on Christmas morning so I had a warm up! It went surprisingly well.

I should also note that the gift registry was Adventure themed– REI and Amazon. I also got a few more traditional gifts such as dishes and bowls, which we are excited to use in our new apartment.

While opening gifts, to make it a little more fun, my cousin suggested to my sister some games she’s seen at her friends’ bridal showers.

The first was that however many ribbons I broke was indicative of how many children I would have. Apparently my friends don’t use ribbon because her gift was the only present with ribbon… and I couldn’t rip it! Hmm…

The second game was to collect all the bows/ribbons to create a “bow-quet” for me to use as my flowers for the rehearsal day. One of my bridesmaids, Demi, was in charge of this task and she did a phenomenal job! 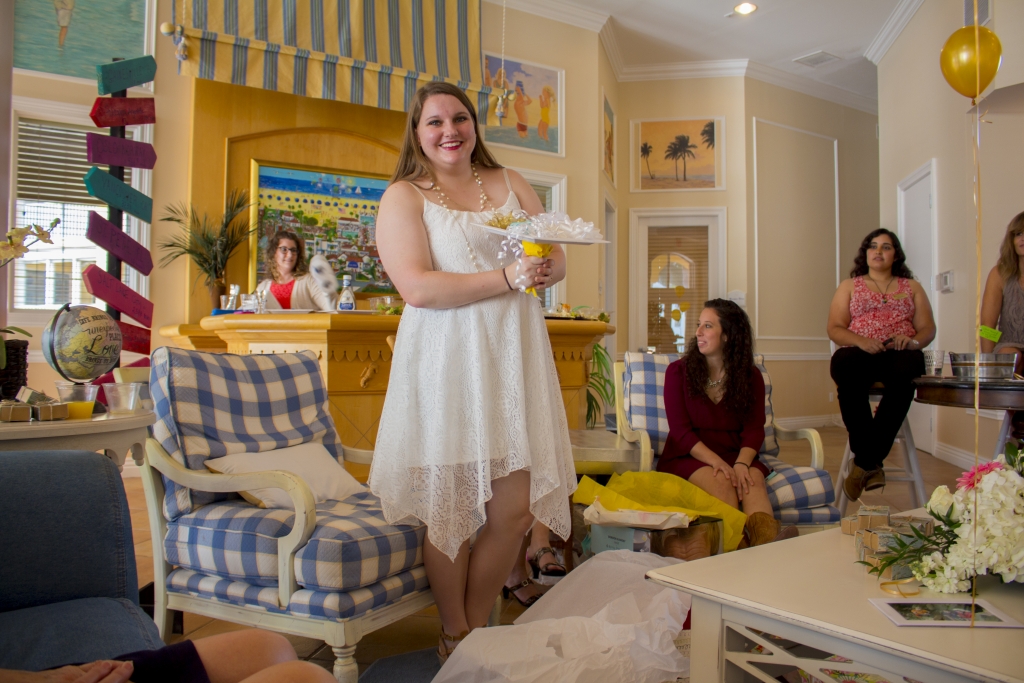 The third game was given to my bridesmaids, Courtney and Erica, to write down all of my reactions to gifts and read it back at the end as a script of what I would say on my wedding night. That was hilarious. Everyone got a kick out of this! I highly suggest this… and it works even better if the bride is unaware of this part. 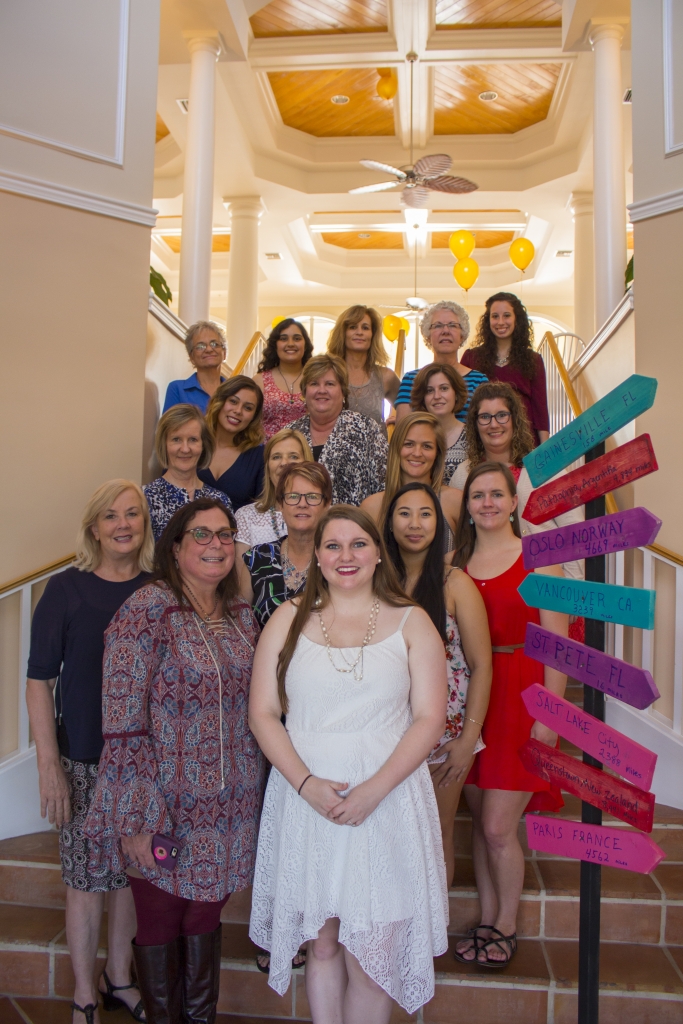 After gifts and photos, a few people had to leave for other obligations. (It’s hard to do these things around the holidays, but it was my only option). 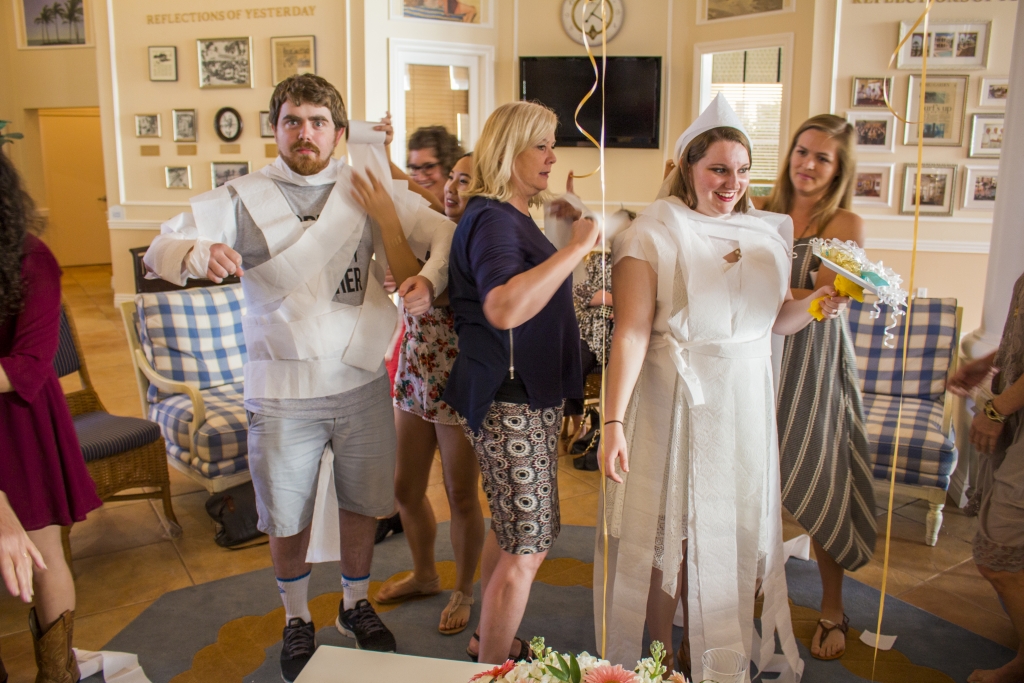 Brighton and my dad showed up to help clean up, but since the party was still going strong they just joined us. My sister suggested the traditional toilet paper wedding dress game, but with a twist! My mom got to dress up Brighton, and Michele (my future mother-in-law) got to dress me up. The bridesmaids also helped with both of us. It was a riot. Everyone was taking photos and laughing and by the end, we looked like mummy bride and groom. Sure, not entirely traditional, but we aren’t a traditional couple! 🙂 It’s more fun that way. 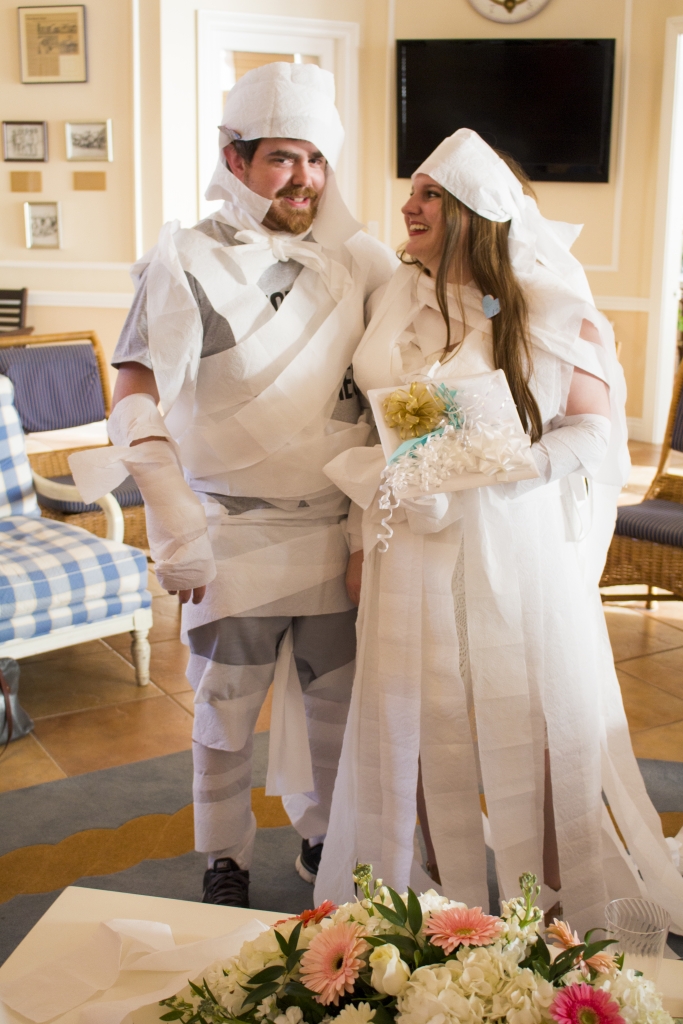 After a majority of the party left and the clean up was taken care of, my closest friends and I walked the beach at sunset. It was nice to be back with them enjoying our old stomping grounds. 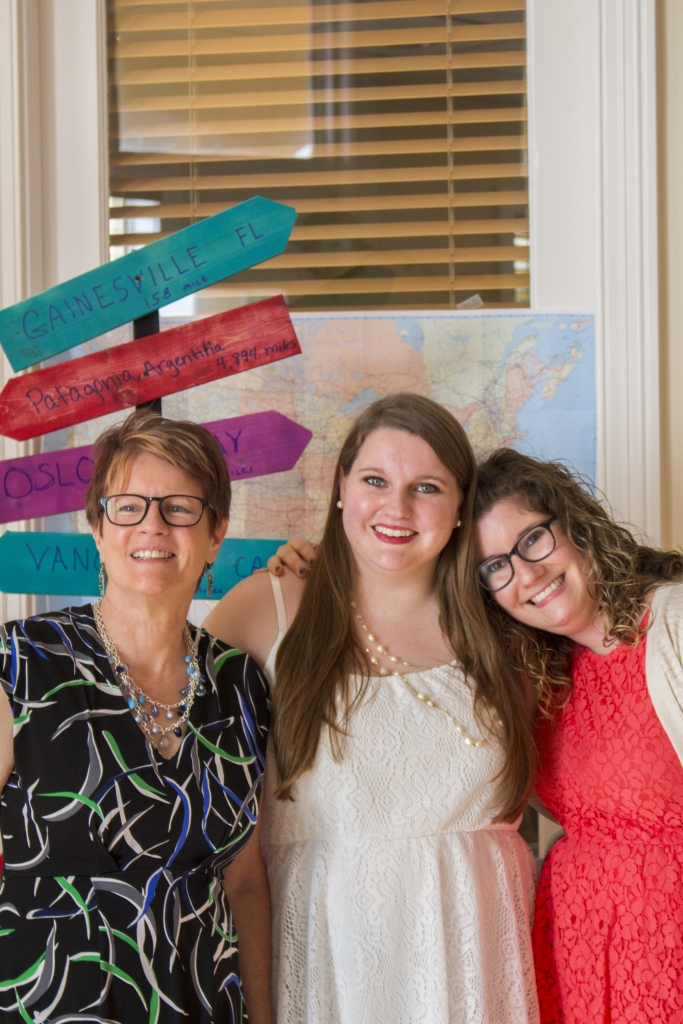 This trip home paired with the wedding planning and seeing a majority of my friends for the first time since I’ve been engaged is making this upcoming wedding seem so much closer and real. Not that it hasn’t been real, just that with the distance, planning from afar, and not being with all my close friends and family, the idea of this wedding as felt distant. But hey! We are less than 100 days out—96 to be exact. 🙂 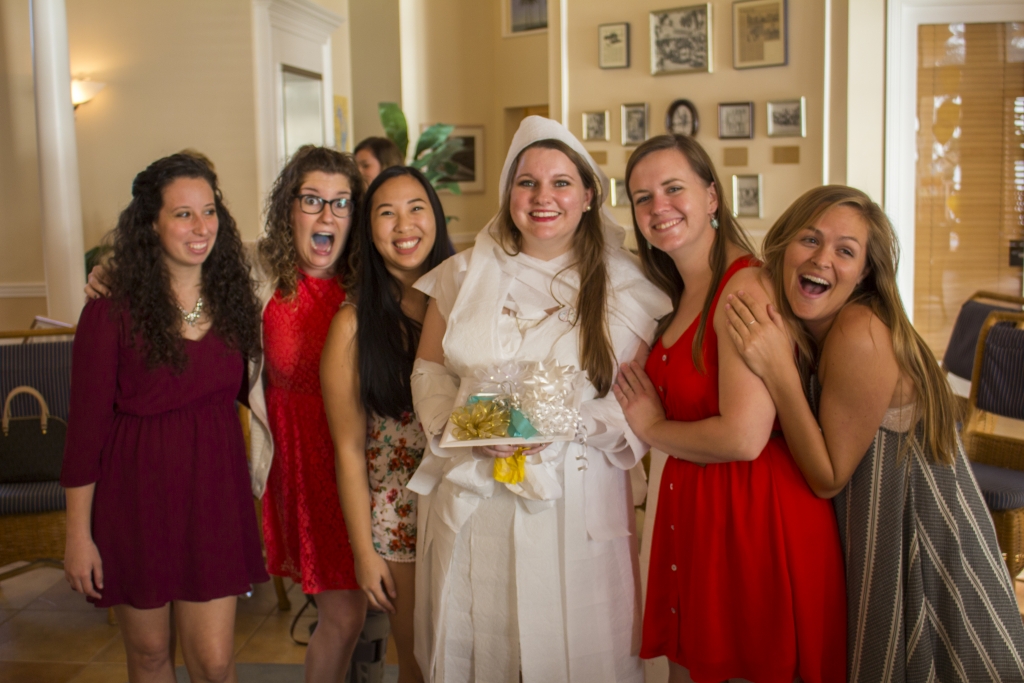 Introduction & Photo of Me [30 Day Challenge]