When I think of Switzerland, I think of Swiss Alps, the Matterhorn, and adventure sports with fantastic views. One of the parts I was looking forward to was paragliding! While we were visiting, we saw many paragliders floating through the sky against the mountainous backdrop. We had planned on going paragliding while in the Jungfrau region, and Martina suggested a company that her friends had used in the past with success. 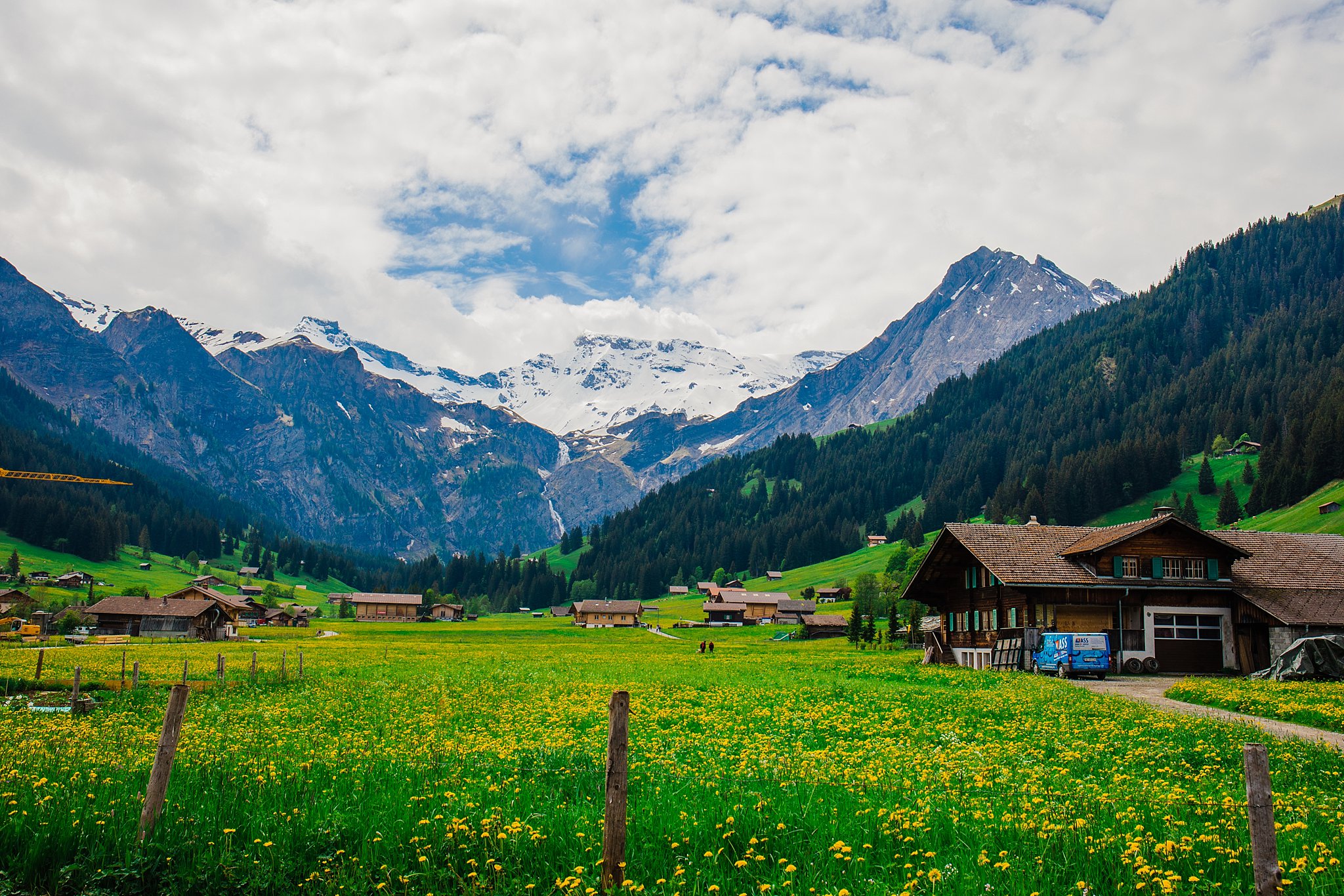 We set up our flight on Saturday evening after our adventures through Lauterbrunnen, and with some hesitation, Brighton also agreed to go with me. Luckily they found two pilots on short notice for us. Since the forecast was looking stormy in the afternoon, we woke up early on Sunday to get to the Tschentenbahn Station (Dorf) in Adelboden to meet our pilots. Martina thankfully bridged the language barrier to explain that we were nervous and asked where to meet us when we landed.

Once we were on the way, we found that the language was a little more of a challenge so we had simple conversation getting to each other. At the top of the gondola, we each took a parachute on our backs and hiked up a steep but short trail to get to the top of this mountain. At the top there was some slushy snow that I struggled to climb without traction or poles.

We got to the top and our excitement started to build. Our instructions were to “run like hell” and “do not sit until you’re 10 feet in the air,” which was difficult to get across. They gave us helmets, protective pants, gloves, a buff (scarf), and (for me) a GoPro. 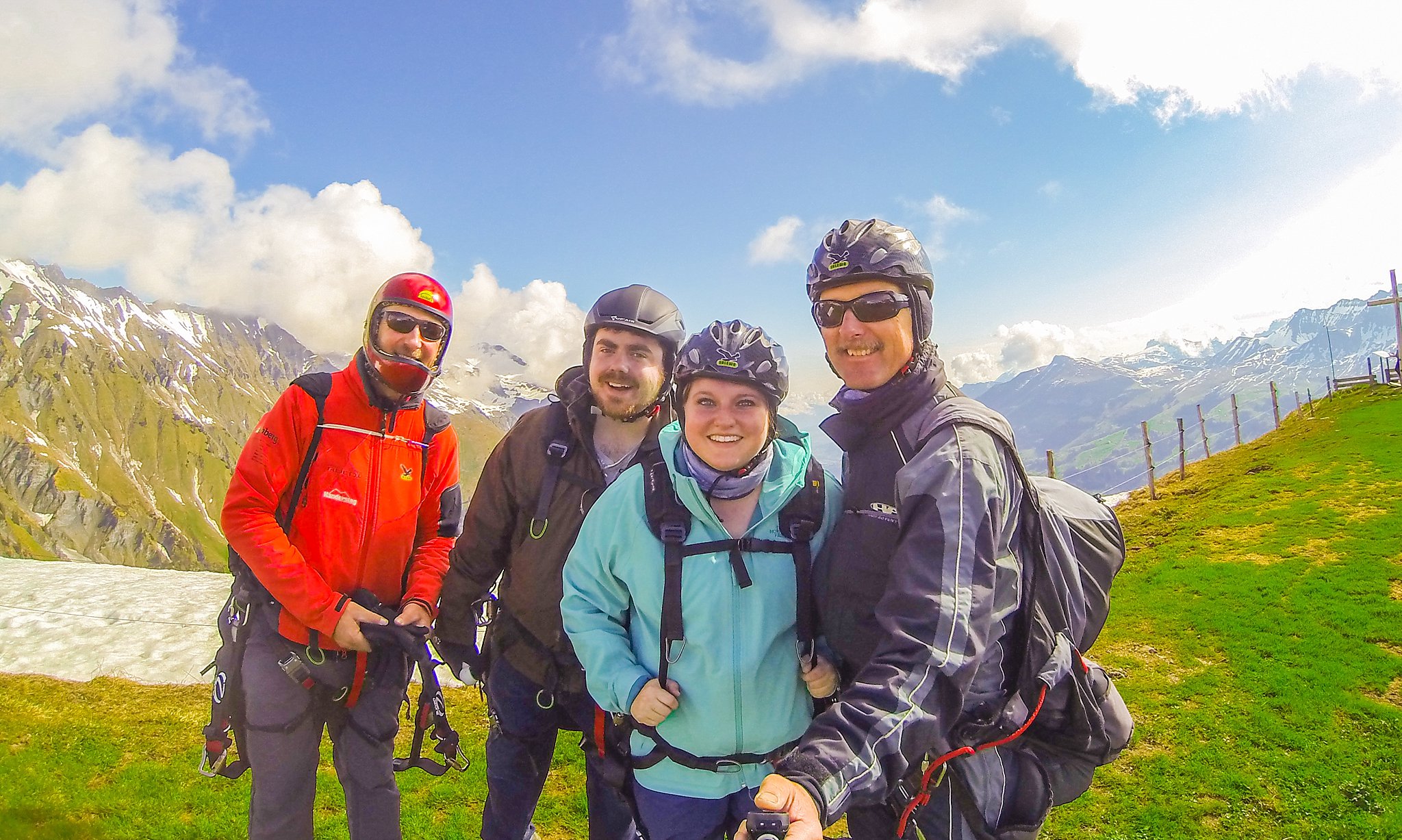 They set up the parachutes on the ground while we waited and got into position with us all clipped in… Then we waited…
…And waited
…And waited.

We were confused, not sure what was going on. They finally explained the “wind was not right” as they watched a little wind indicator flag bobble in the weak gusts. They said that it had it be a certain direction (since we were on one side of the mountain). Finally, my pilot said… 1…2…3… GO! And I ran.

I ran, and ran, and then suddenly my feet picked up ever so slightly, and then next thing I know, I am rolling down this mountainside for what feels like forever… until I stop. Surprisingly, nothing hurt. My poor pilot had been along for the entire tumble as well. I felt so shaken, but more than anything, I was stunned since we’d seen Martina’s friends videos making take-off look so easy!

As we reset, Brighton took off running in the same fashion. This time, he got off the ground and suddenly the parachute was flying, but going down. All I could see was his parachute heading down close to this building, and nothing. Clearly he hadn’t made it up into the air either. After a few minutes, he comes trudging up the hill with his guide, looking defeated. I was so thankful he was alright, but a lot more banged up than I was. I was covered in dirt and mud, and he was too. We walked up to the top of the hill as our guides debated on what to do.

At one point, they decided to check out the opposite side of the hill— the snowy side. They said that it’d only be a few steps and we’d be up in the air. But after our tumble, I was not feeling as confident to posthole into thick, slushy snow and topple down the sharp drop-off.

My mind started wondering how we’d get off this mountain, and all I wanted to do was not hike back down the slush that we had come up from.

At last, they decided that the wind was better and ready for us to takeoff. My pilot asked me if I was ready, and I said, “NO!” since I was feeling a lot less confident than before. Then again, 1, 2, 3, GO! I took two steps, and WOOSH, we were in the air, flying!

Flying in the Alps

I was surprised at how long the ride lasted, and how calm the ride was after our tumultuous start. My pilot guided us through the clouds and we went up and down. I could hear when we were going up or down because there was a beeping device near my shoulder to tell him our altitude- Beep, beep, beep… boop, boop, boop. 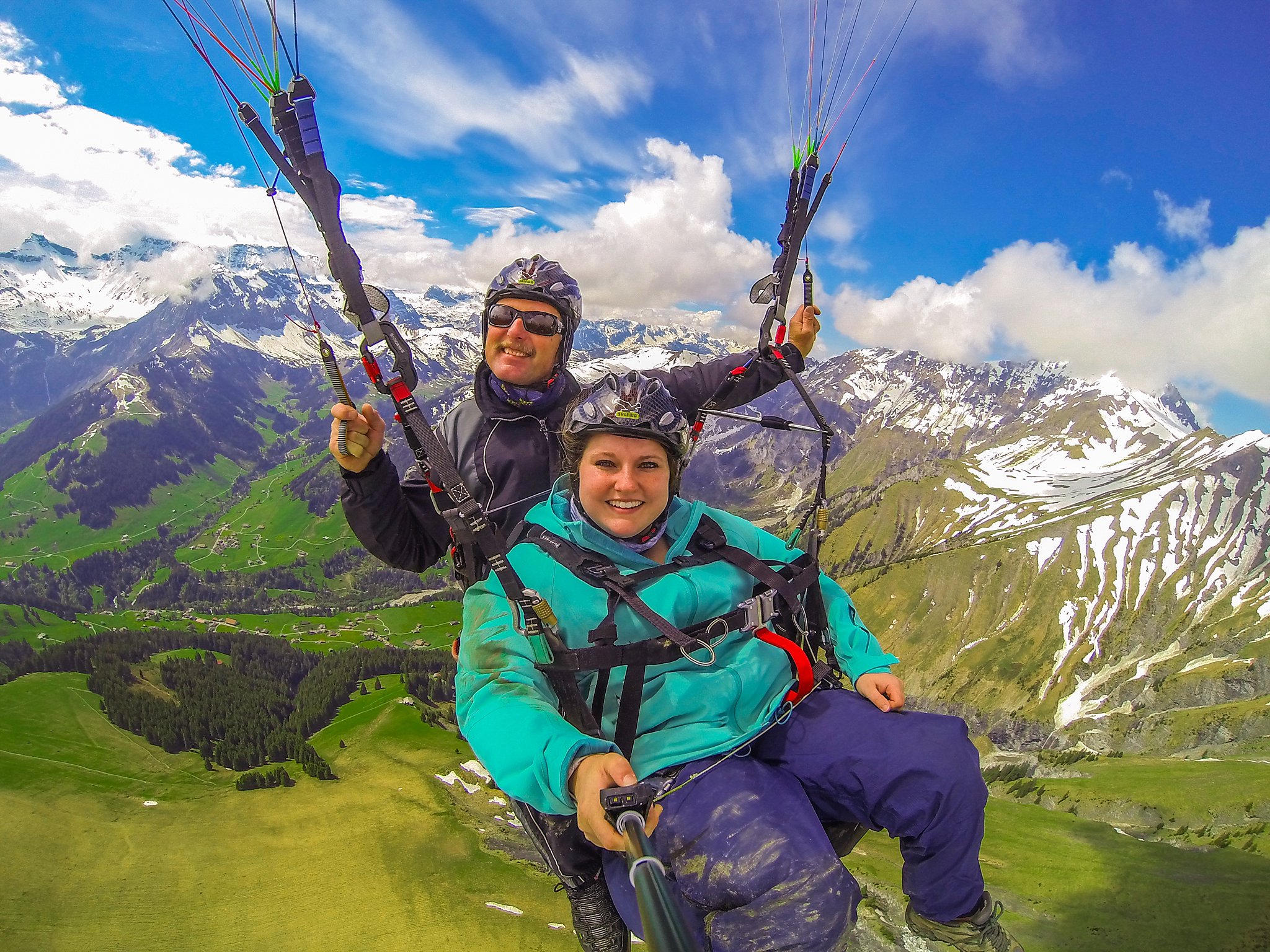 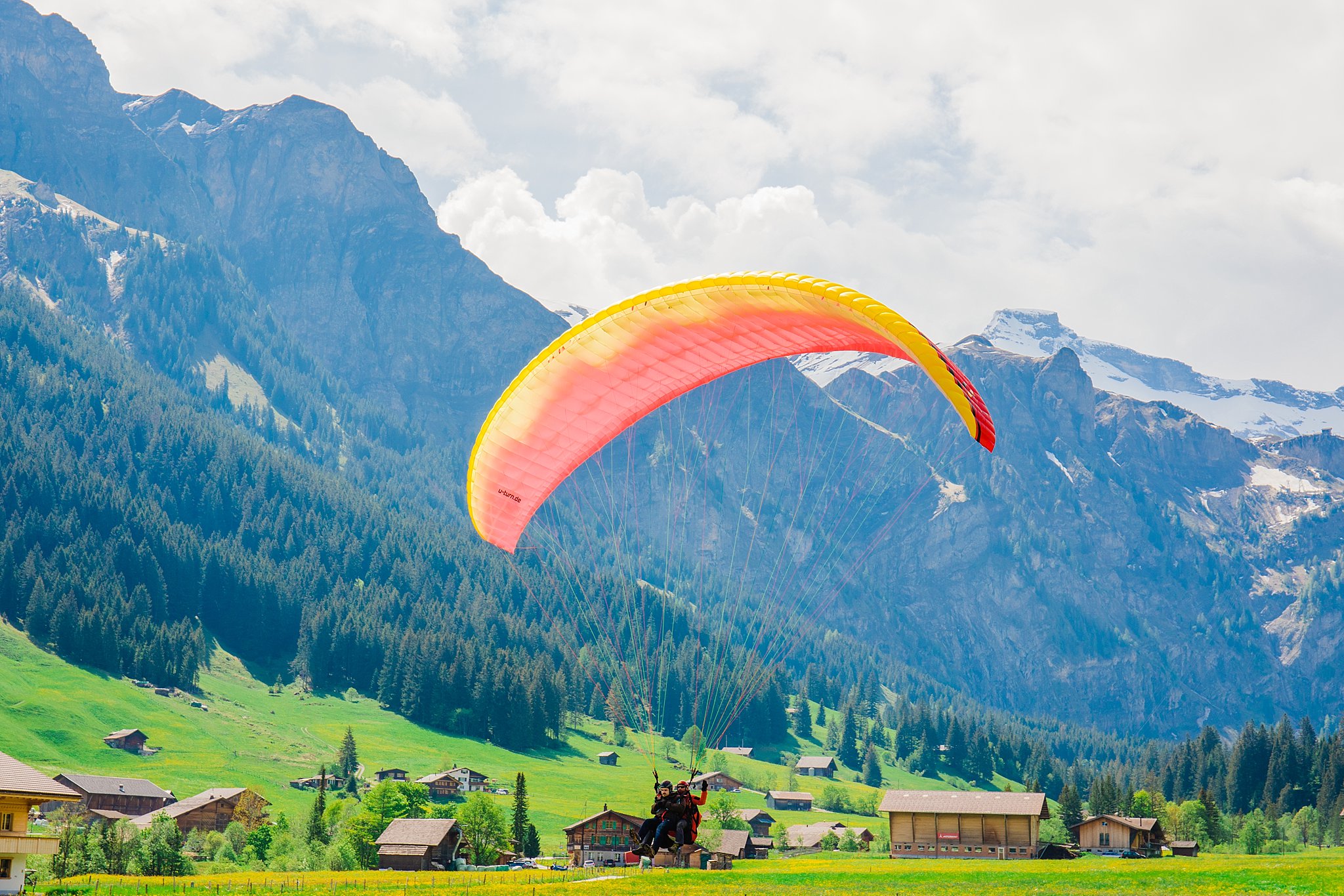 We watched Brighton land near the waterfall across the valley while we took our time in the air. At one point, I had regretted not putting on the gloves he had given me because my fingers eventually froze with the wind. The GoPro died about halfway through as well since it had been drained waiting for our takeoff for so long.

After enjoying our ride, we neared landing but not before he asked me if I liked “thrill” and I hesitantly said yes, not sure what to expect next. All of the sudden, he pulled to one side, we circled up into the sky and then started free falling down. It was a lot of fun!

When it was time to land, I looked like a flailing squirrel, but I landed safely and plopped down. Oops!

We parted ways, and our pilots told Martina (in German) that they felt so bad for the rocky start and it had not happened in 30 years. They felt guilty that they had rushed it. We were fine, and had fun. Everything was great when it was all said and done.

Martina brought us lunch from the bakery, Haueter, in town. We enjoyed the sunny day at a picnic table while we recovered and told her the story of our flight.

Once we had recovered, we followed one of the many trails (wanderwegs) from town towards the large waterfall at the end of the valley— the Engstligenfälle. The waterfall comes from a large plateau that sits above Adelboden, the Engstligenalp. 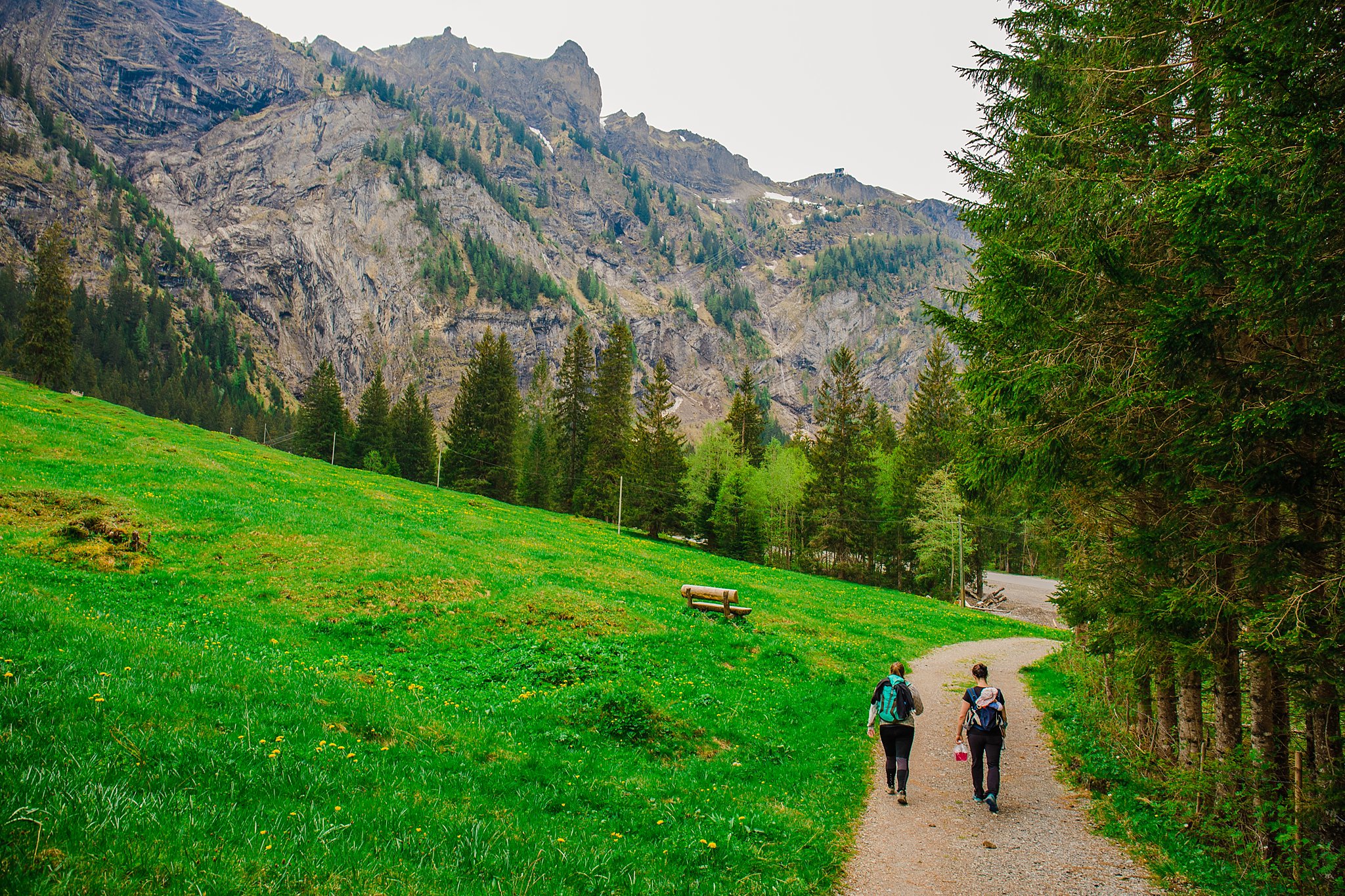 As we walked the rain that had threatened finally started coming down, as we were mid-way to the waterfall. We ended up stopping our hike a little early so we could catch the bus back into town and enjoy some hot cocoa. 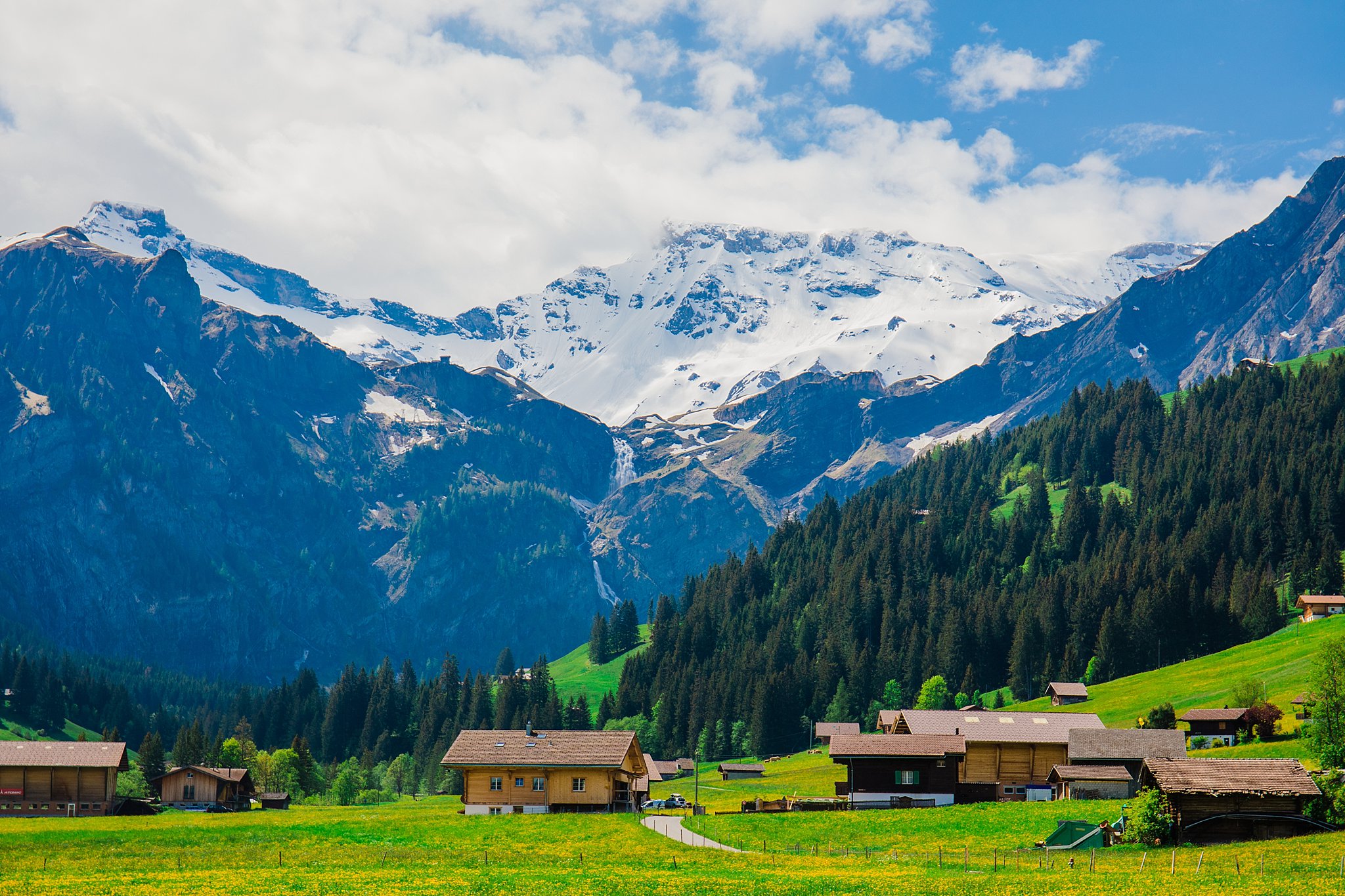 We’ll be back in the summertime to enjoy the waterfall in all her glory.

Dinner at the Chalet

We were dropped off by the bus and walked back towards her family’s chalet. We stopped at Haueter, Martina’s favorite bakery in town, to enjoy some hot chocolate and snacks. It was the best hot cocoa I’ve ever had. They melt real Swiss chocolate into the drink with some Swiss dairy milk… YUM! 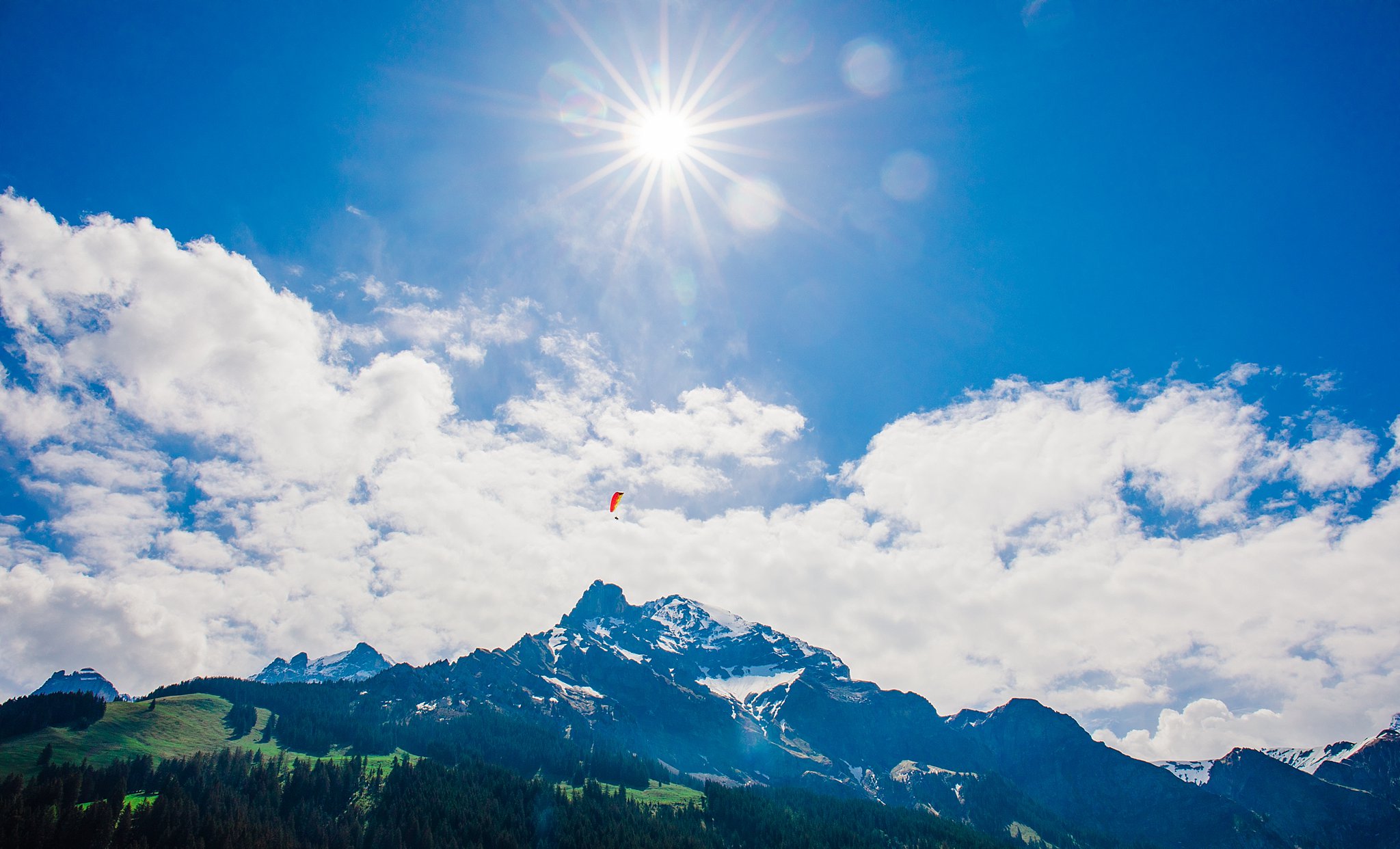 Afterwards, we walked back to the chalet and enjoyed a relaxing afternoon with the most incredible view.