The beginning of summer always gets me thinking about what warmer weather adventures I should seek out each year. Our friends Rachel & Brandon invited us to go camping somewhere close to Salt Lake City this past weekend. Somewhere that’s been on my summer bucket list for a while is a trip to Causey Reservoir up in Huntsville, Utah (near Ogden). I thought it’d be a fun, quick trip to combine camping and paddling in the Causey Reservoir.

Causey is a reservoir nestled within the Ogden Canyon in Huntsville. It’s a popular location for paddling and fishing because motorized vehicles are allowed in the waters only at a wakeless speed according to the Utah DNR site. There are no designated launch areas, but there are plenty of accessible areas for you to narrow your boards to the water easily. Swimming and cliff-jumping is also common. 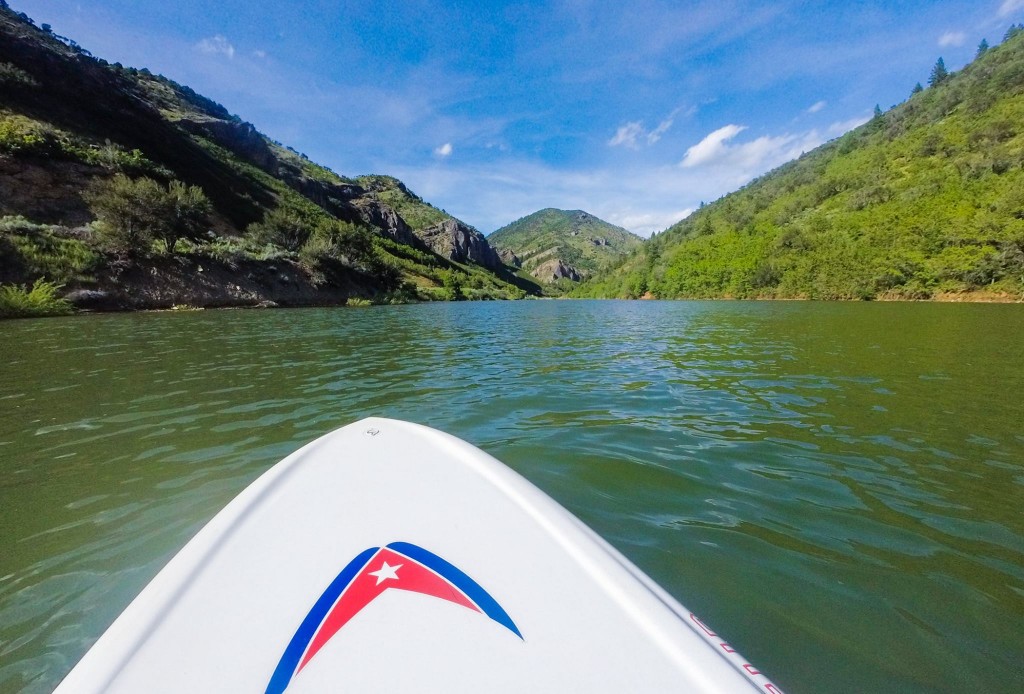 To rent the boards, we went to a funky little shop called Detours in Huntsville. It’s about a 15 minute drive from there to the reservoir. We strapped on the rental to the car and drove up the canyon carefully. Since we only had about half the day left, we were able to get the half day rental for the Adventure SUP and share it. We chose the Adventure SUP because it was lighter and more manageable for strapping to the top of my CR-V. If we had a truck or something meant for hauling, we might’ve gotten the Basic option. Brandon and Rachel own their own, which is nifty and inflatable for easy transport. 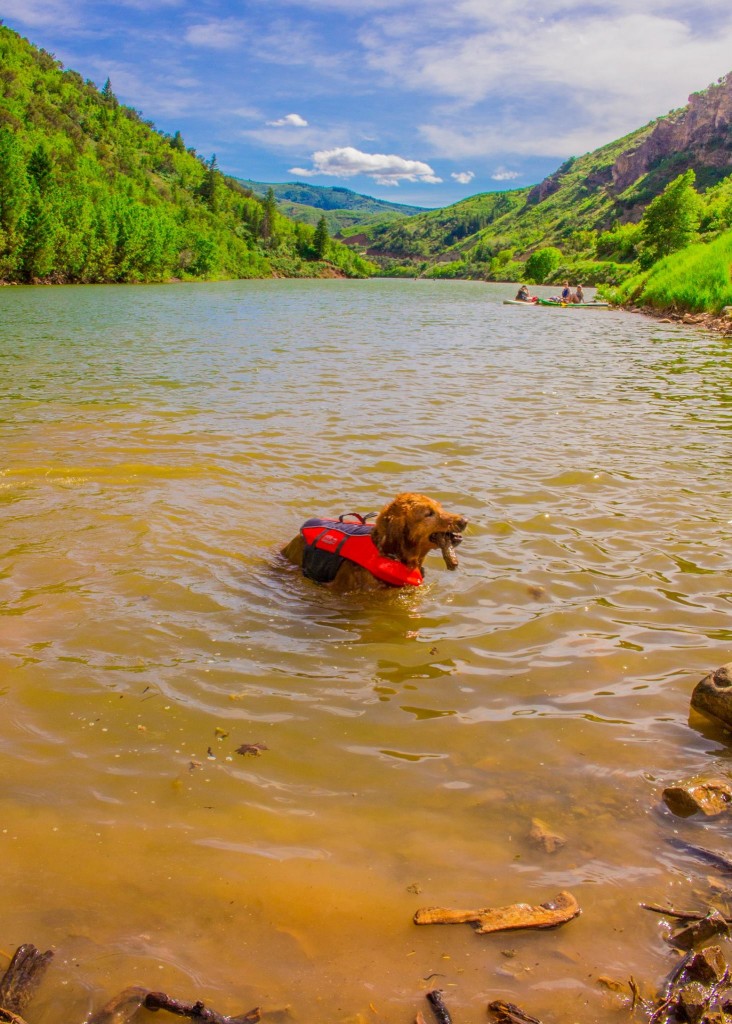 We chose this weekend to try taking Koda on her first camping trip since we adopted her. She loves swimming, and unlike many of the Salt Lake canyons, dogs are allowed in the canyon/bodies of water. When we let Koda out of the car to get her ready, she BOLTED down the riverbank into the water and then bounded back up the riverbank to shake off. You could say she was in doggie paradise! 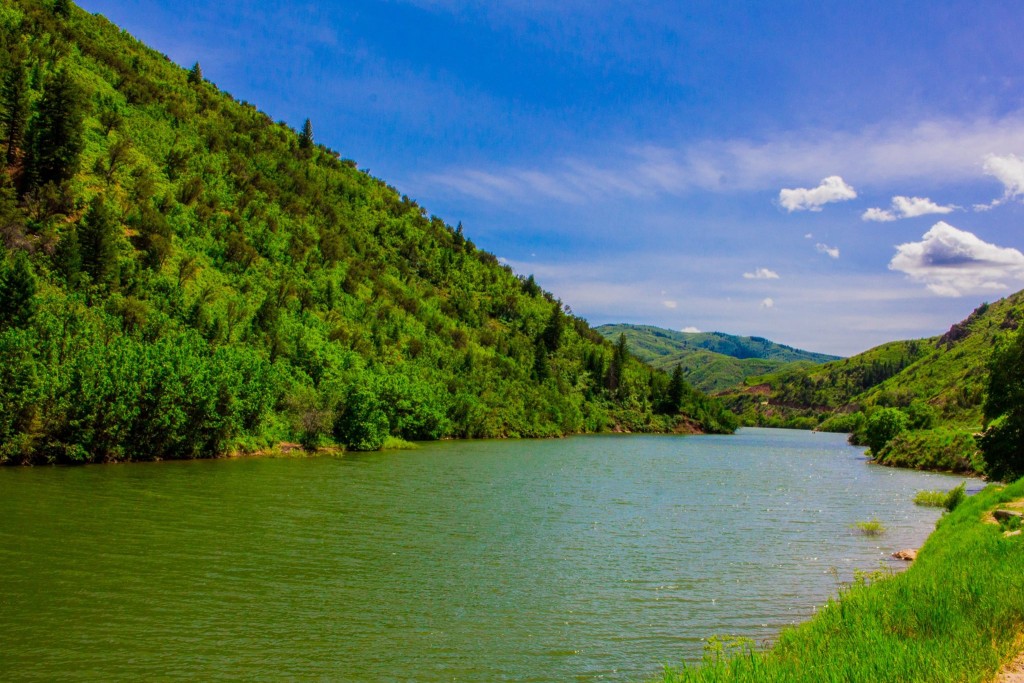 Once we got the gear off the car and into the water, Koda decided she wanted to jump on the paddle board. I was nervous that she’d jump on one side and then flip me over (as I was already struggling with getting the hang of it), so I paddled away as fast as I could so she couldn’t do that. By doing so, I ended up very nervous that Koda would tire herself out too easily swimming, and I’d end up having to try to rescue her at some point. For this reason, I was glad to have a borrowed doggie life vest for her to swim all day. 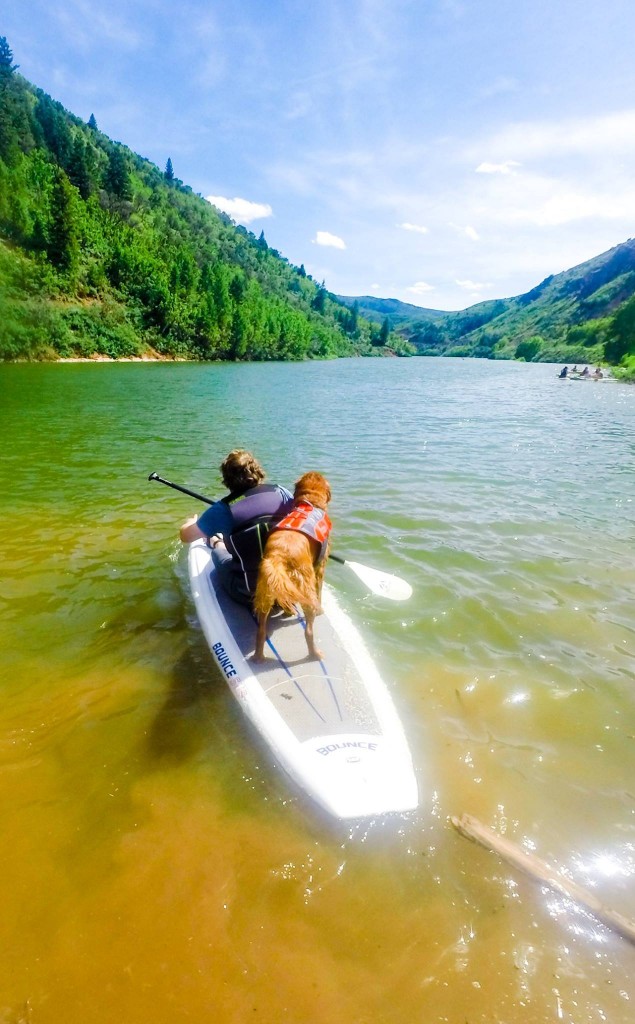 Once I made it back to the beach and tried to convince her to jump on the paddle board when it wasn’t moving, she didn’t seem very thrilled. Brighton took a turn and was able to get her on the board only to have her jump off and have to pick her up with one hand by the handles of the life jacket. It was very cute to watch him keep her stable as she sat in his lap and he paddled. *Oh, my heart!*

After a few hours of taking turns with the two boards, we decided to return the gear and locate our campsite. The people at Detours were very nice and helped us get everything on and off our car without issue.

Things to be aware of if you plan on visiting Causey Reservoir: 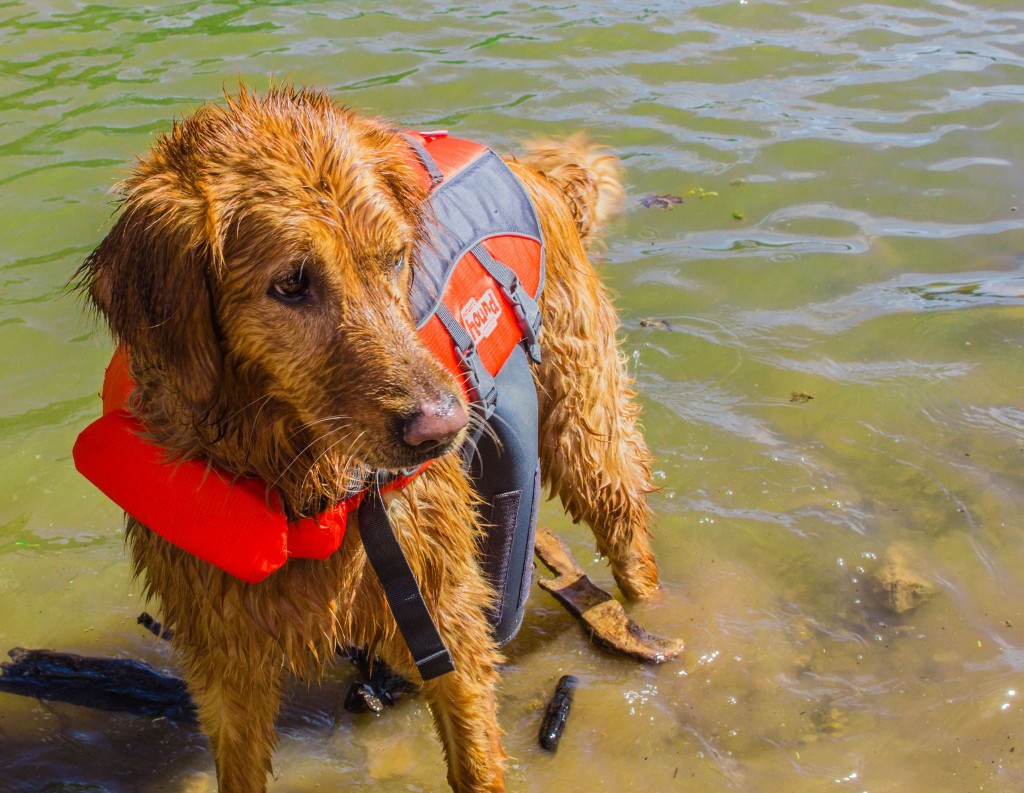 After we took some time at the reservoir, we headed over to the campsite at South Fork Campground I reserved on Recreation.gov. I like being able to reserve in advance because many campsites around Salt Lake are either first-come, first-serve or they book out far in advance. The campground hosts told us that we might’ve gotten lucky booking so late because I booked the week-of without issues. 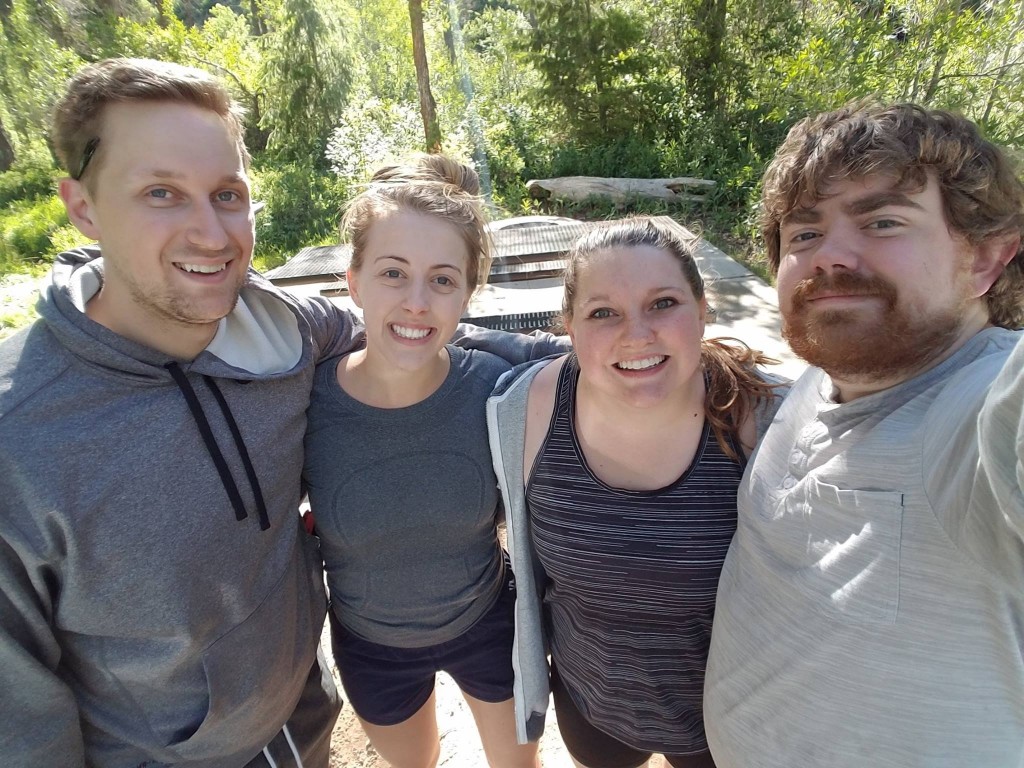 The facility had easily accessible toilets, fire rings, drinking water, and firewood. We thought there were grills, but it turns out it was a grill stand. It ended up working out since we made our foil packet dinners right in the fire! 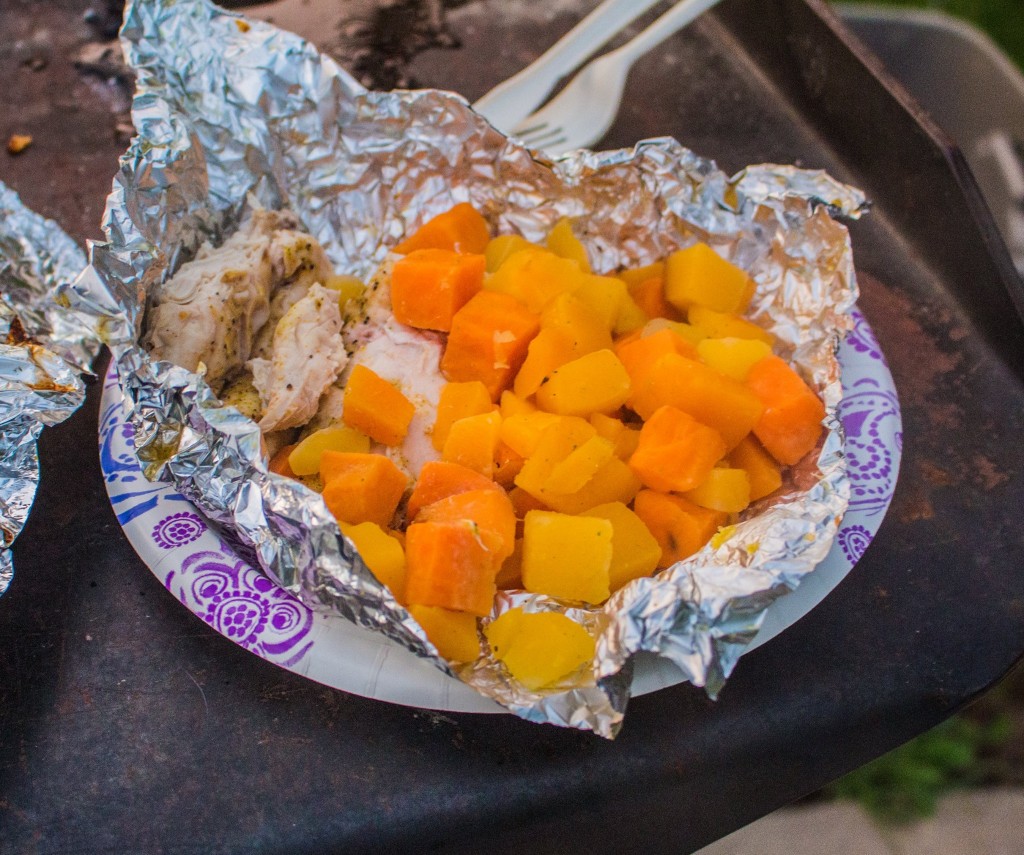 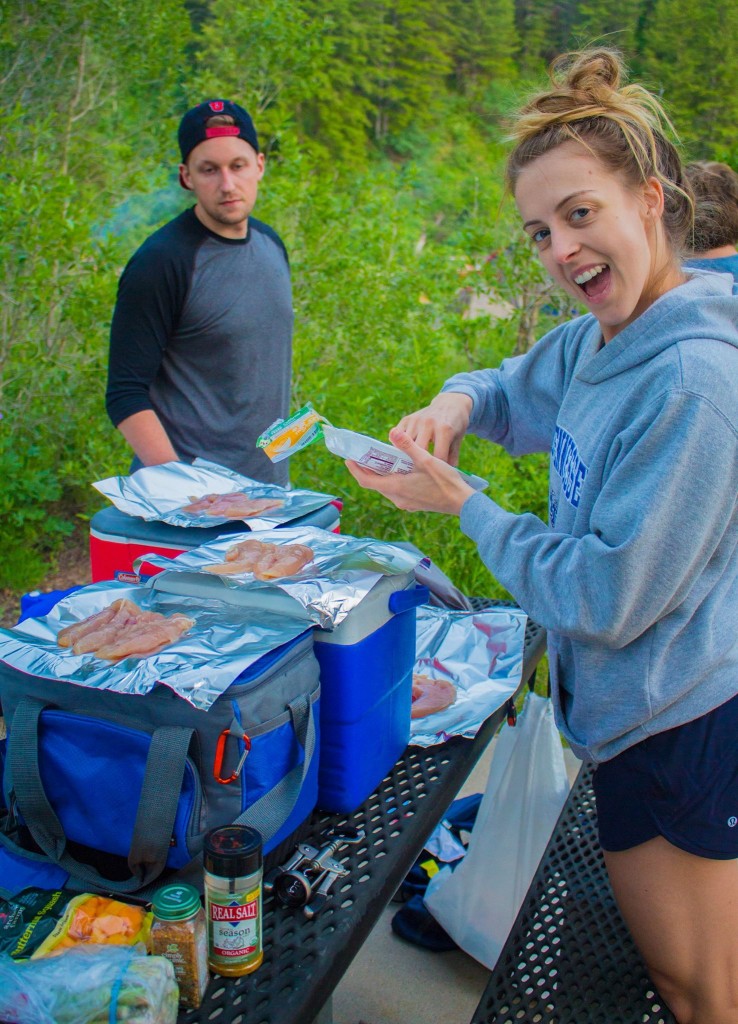 Wrap everything (except asparagus) in individual foil packets and throw into fire for 30-45 minutes until chicken is cooked through and the vegetables are tender. Put asparagus in separate foil packet and cook until tender. 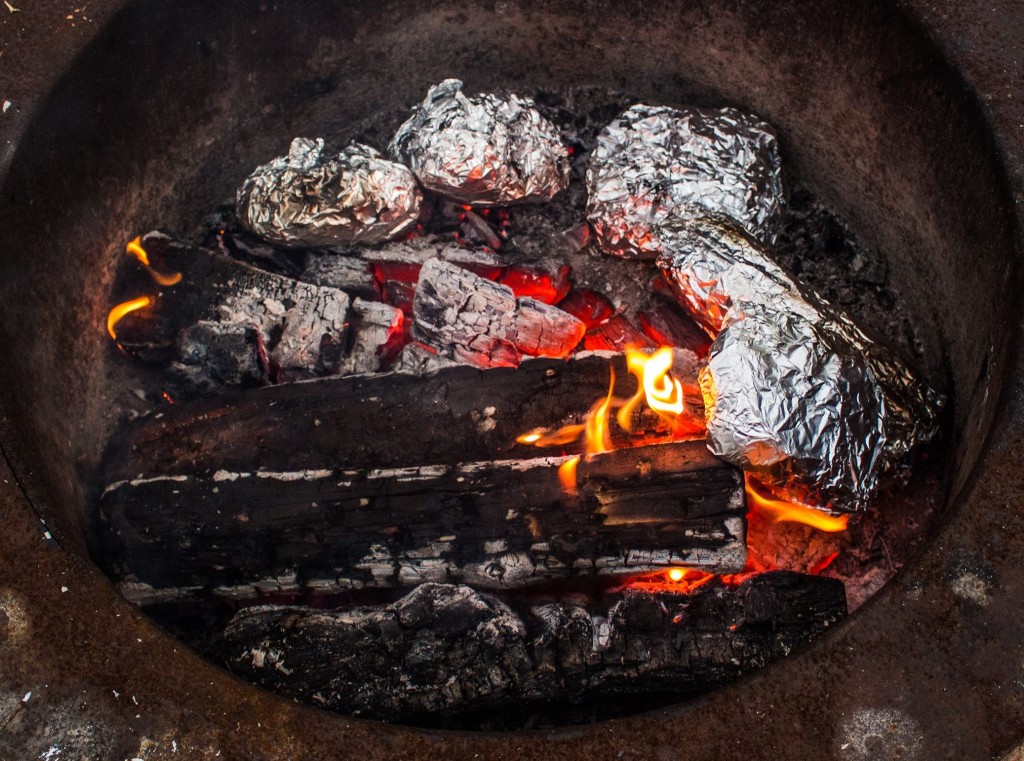 After dinner, we enjoyed some good ol’fashioned s’mores (let’s be real, they’re the best part of camping) and chat. 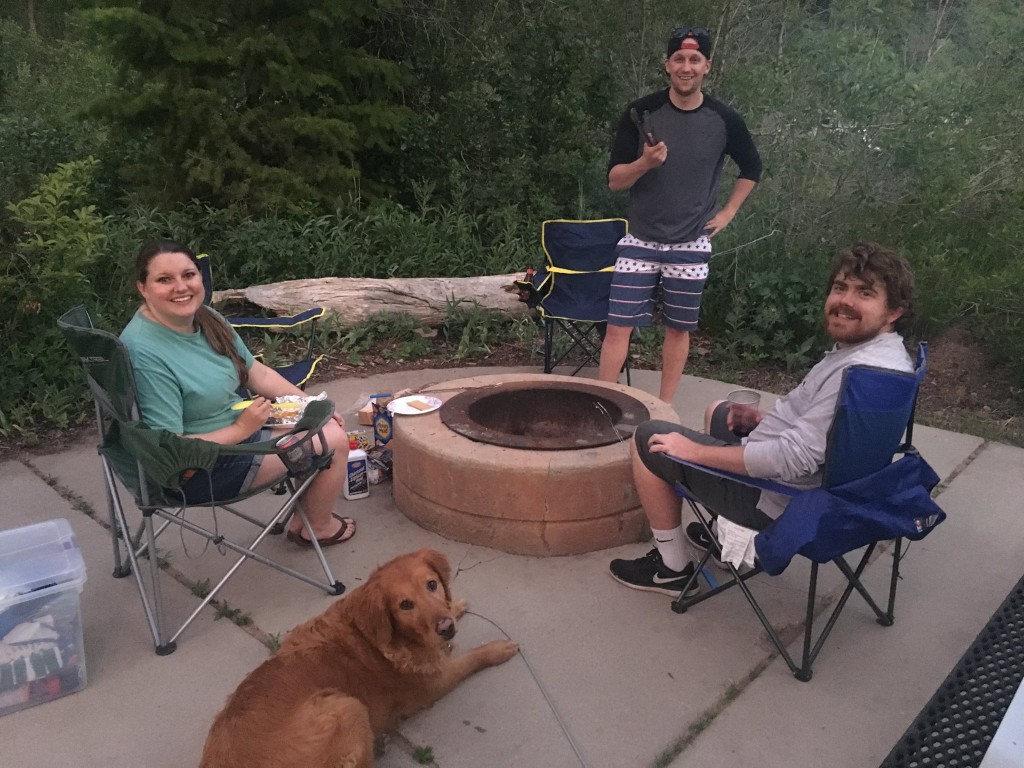 After spending all afternoon in the sun, everyone was ready for bed. Koda and I retired to the tent while Brighton hammock-camped. Koda ended up being a great source of warmth and I felt a little more protected than usual. Maybe we’ll be bringing her on more camping trips this summer after all! 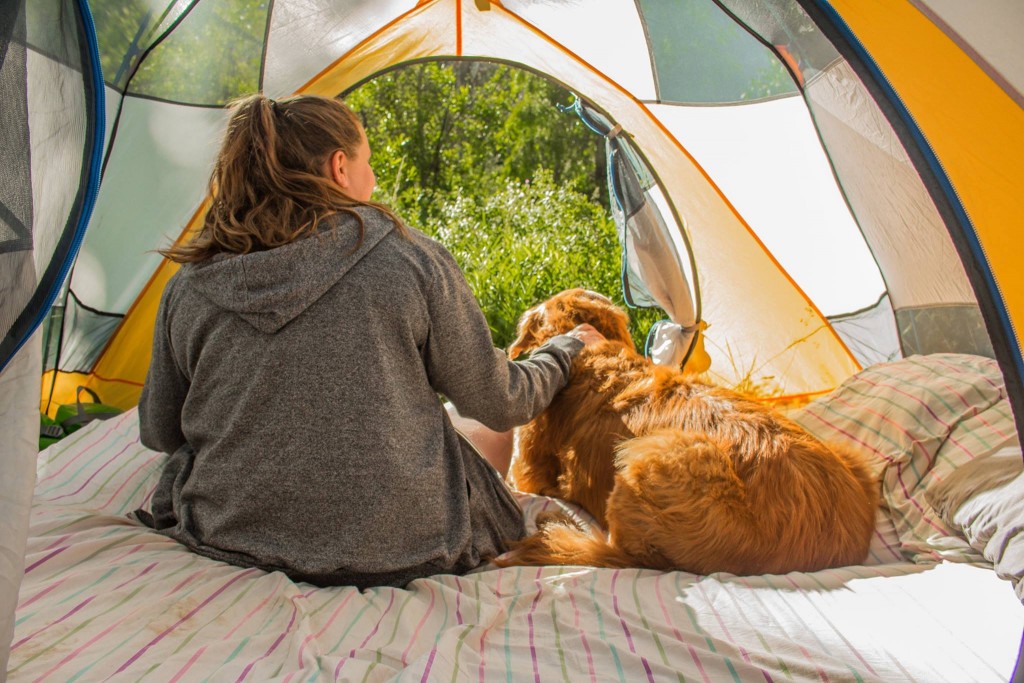 The next morning we packed up camp after failing to get my gas burner to work so we could make coffee. Watching sunrise and coffee are the second and third best parts of camping 😉 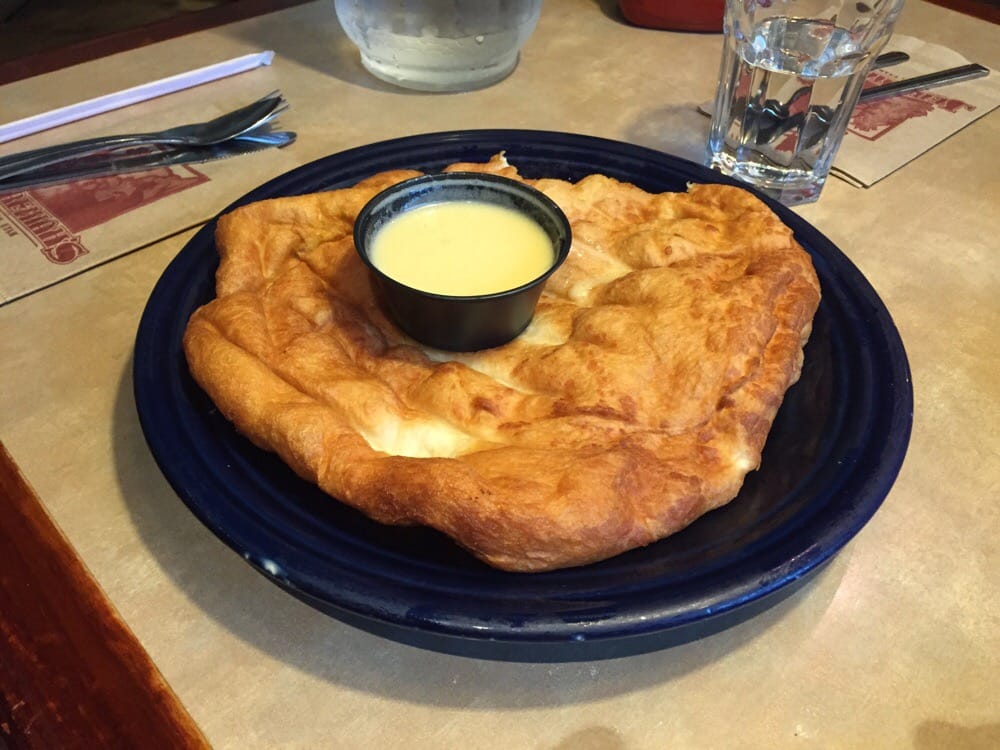 After getting back into civilization, we realized we had picked a popular brunch place on Father’s Day. Good breakfast food was worth the wait though! Jeremiah’s is famous for their scones. They are yummy, fluffy dough served with a sweet sauce and they are about as big as your head! The 4 of us shared 2 plates, and couldn’t fit anymore after that. I also got their mocha which hit the spot with enough caffeine and sugar to make me a happy camper. (#ketofails)

I decided not to worry about being on keto too much because I was with a group of friends and didn’t want to be too needy. Regardless, I would say that I tended to stray towards the meatier/fattier items anyways… with the exception of the s’mores. 🙂

What are your favorite summer getaways nearby? Where should I visit next?